Enjoying surprise Indian Tacos, the red rock chimneys of Bryce, and the best drive of the trip.

On our drive from Zion National Park to Bryce Canyon National Park, about an hour from our new campsite, traffic suddenly slowed to a complete stop. A highway patrol officer directed everyone to park along the shoulder of the highway. A check of Twitter revealed that Route 12 was entirely closed, due to a terrible accident earlier in the day.

After about 15 minutes parked there, watching the sun steadily descend behind the mountains, the prospect of pitching camp and then cooking dinner seemed less and less appealing. Fortunately, about 10 minutes past the closure, we found the tiny town of Panguitch (pronounced… no man can say). The town itself has an odd Old West mining town feel to it, and about as many barbecue joints and diners as stop lights.

On this particular day, Panguitch was overwhelmed by a mass of hungry and similarly delayed highway travelers, so we ended up eating at the only place with room, Tandoori Taqueria. The restaurant is run by a father-daughter combo, with a cute toddler providing some dining room entertainment. They also employ some of Kimmy's fellow sister wives from "The Unbreakable Kimmy Schmidt," but then again, where else but southern Utah would you encounter sister wives in the wild? Anyway, our expectations were far exceeded - the naan tacos were actually quite good and wouldn't be out of place at a food truck park in San Francisco. Nice work, Tandoori Taqueria!

Refreshed from a delightful meal, we proceeded to our campsite at Kodachrome Basin State Park, about 30 minutes from Bryce Canyon National Park. We arrived after dark, unfortunately, as the drive along Route 12 is supposed to be beautiful. It was certainly remote, as we couldn't see any of the surrounding terrain beyond the campsite.

We awoke to towering hoodoos surrounding our tent. We also awoke to Tiffany’s head cold due to the fact that we had climbed up 3,000 feet over our drive and the overnight temperatures dropped to the low 40s.

Luckily Tiffany chose Kodachrome based on raving reviews that specifically mentioned "amazing showers." Confirmed: the showers were incredible. This wasn't a case of "I've been camping in the desert for three nights, and I'd take a shower from a hose at this point." These showers looked brand new, each had a bench, a waterfall shower head, and 5-star water pressure.

After taking a leisurely morning and refreshed from a good shower, we packed up and proceeded to Bryce Canyon.

Fun fact: Bryce Canyon is technically not a canyon, since its erosion didn’t come from a central stream. Bryce is actually a series of amphitheaters containing the world’s largest collection of hoodoos. Regardless of what it is, Bryce is certainly another feast for the eyes, vista after vista overlooking the chimneys and canyon floors. 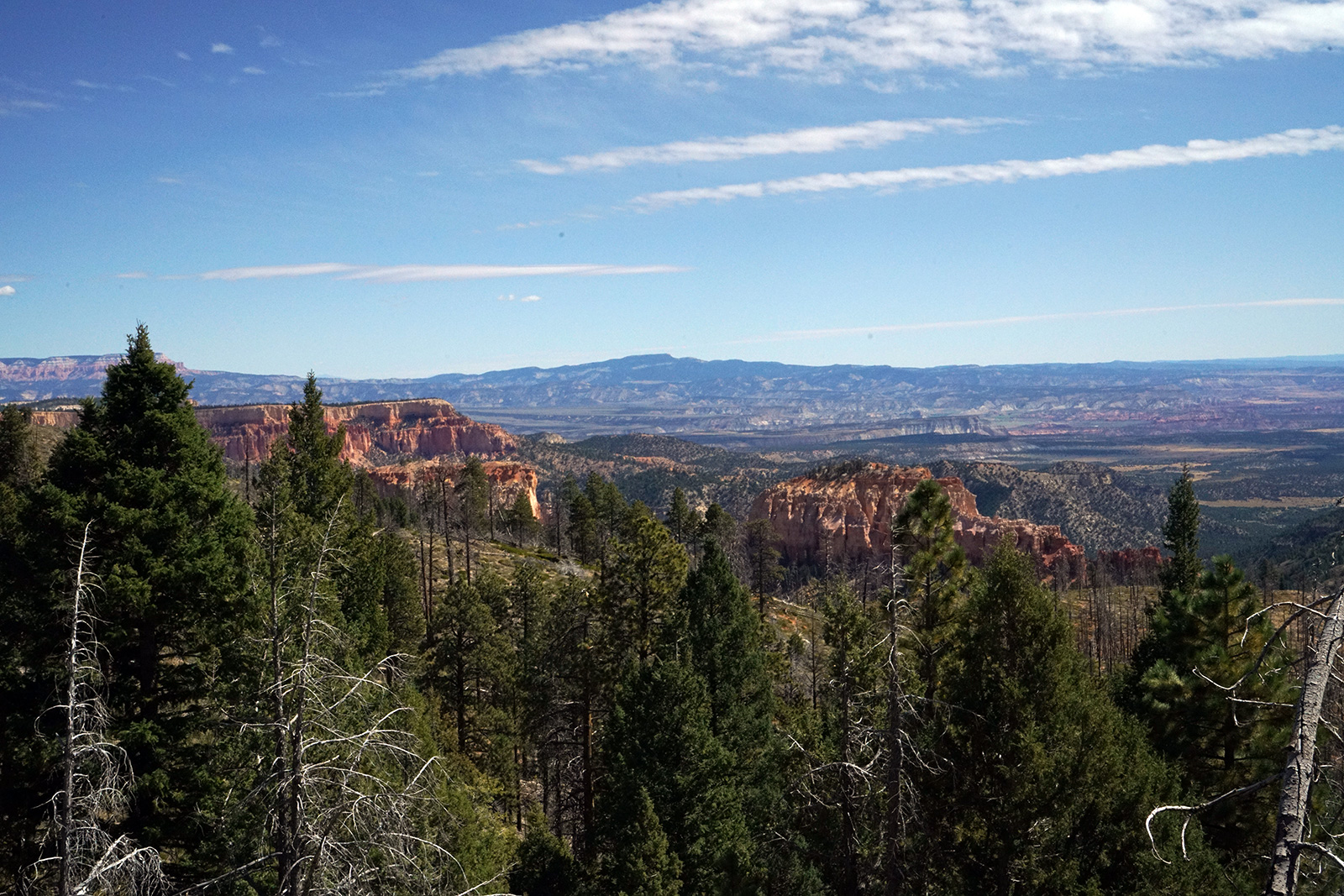 Unlike at Zion, you aren’t required to take the park shuttle and thus we were forced to confront a lot of traffic and battles for limited parking spots. Still, it was fascinating to drive the scenic route through the park, which was essentially on the ridge of the canyon. It often felt like you were just on a typical mountain road with forest on either side until you reached a clearing and saw these massive amphitheaters filled with pink and orange chimneys.

Bryce Canyon was named for a man who settled in the canyon in the 1870s, following Mormon pioneers in the 1850s. However, research by the park service points to over 10,000 years of indigenous presence in the park. You can’t help but wonder what those who came before you thought when they encountered this truly unique place. 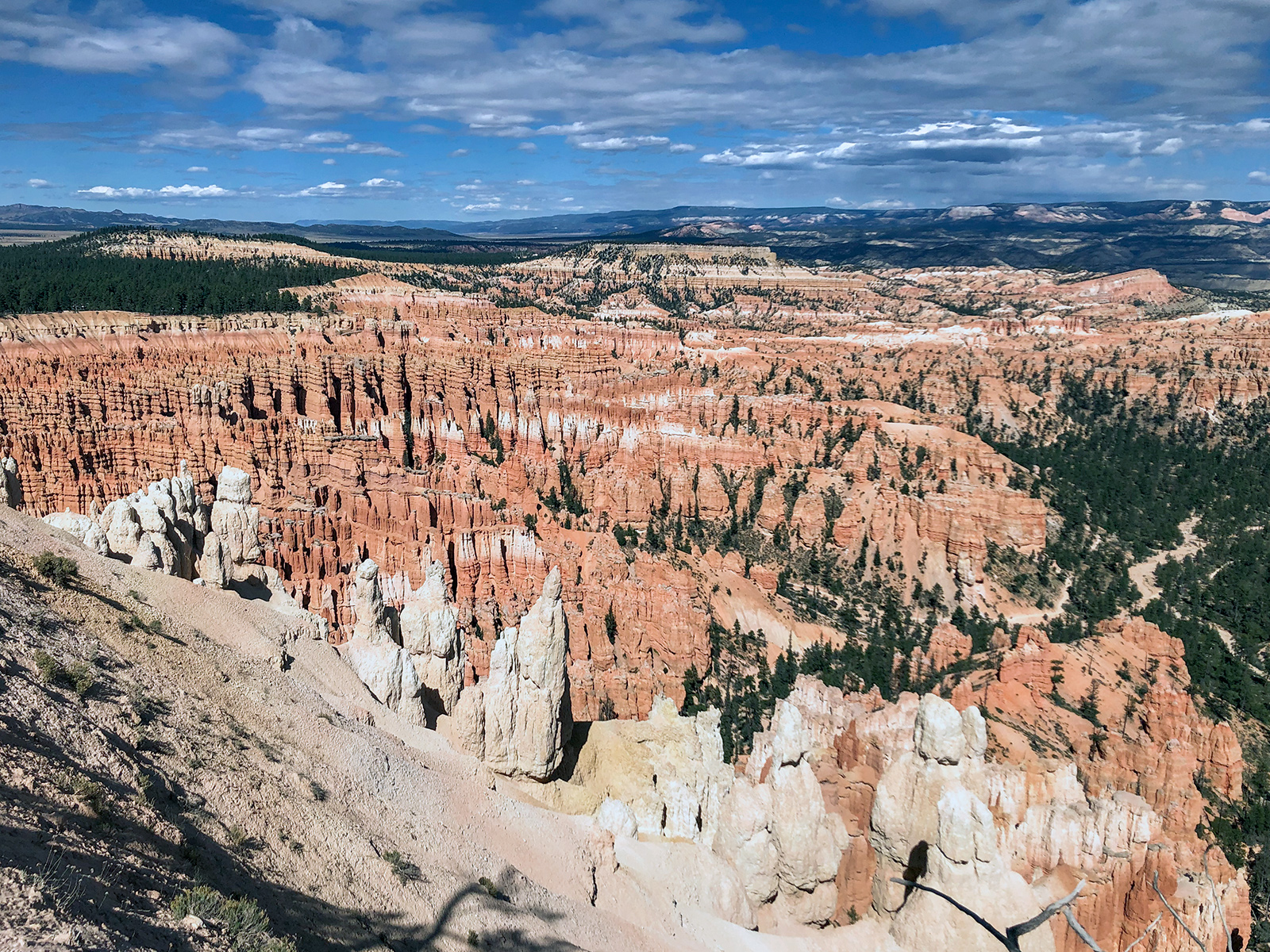 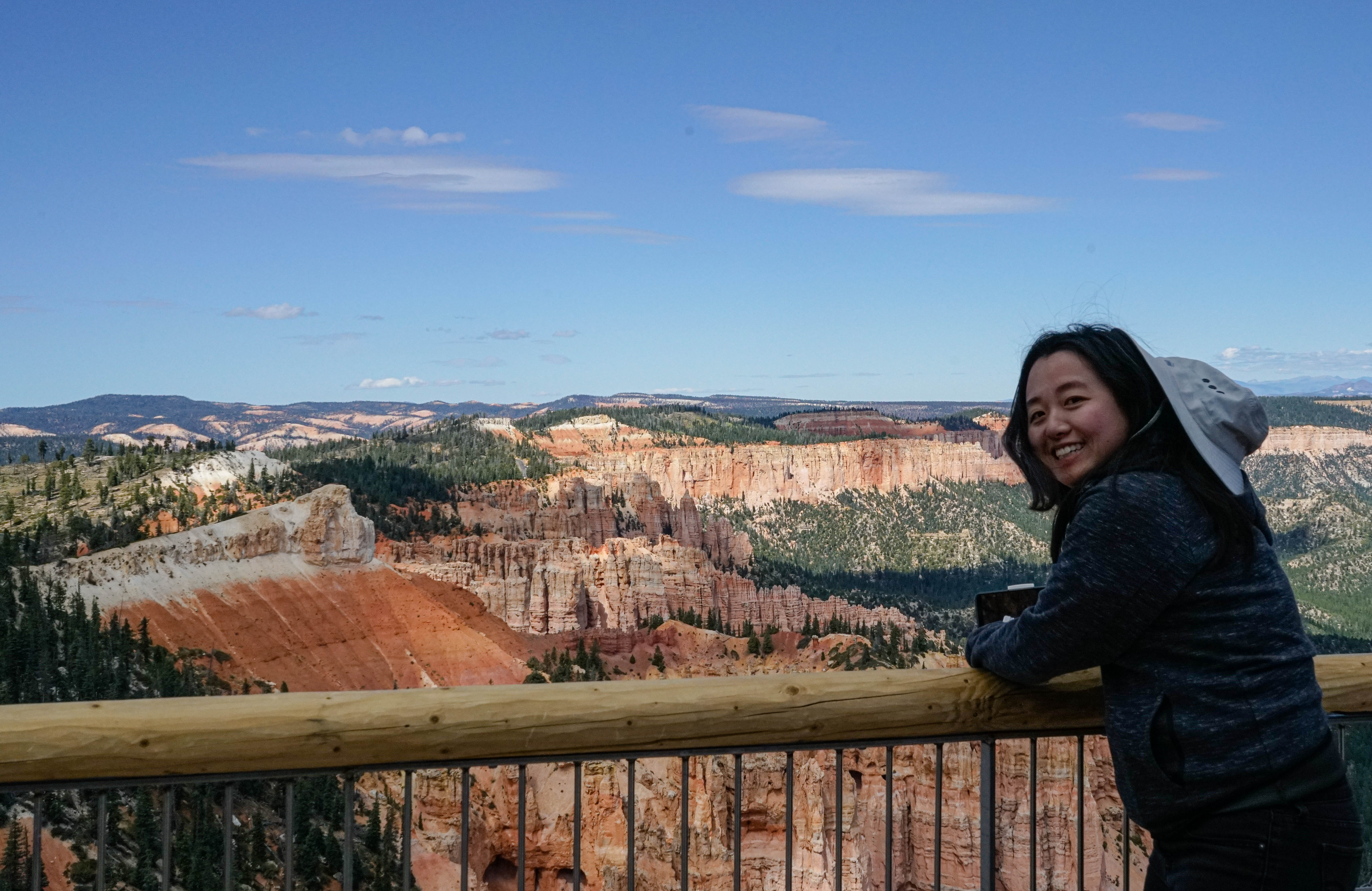 When you’re standing above the massive amphitheaters filled with more hoodoos and chimneys than you can count, marveling at something you’ve never seen before and pondering how long it took for erosion to carve these magnificent structures, it feels like you’re looking at a place outside of time. 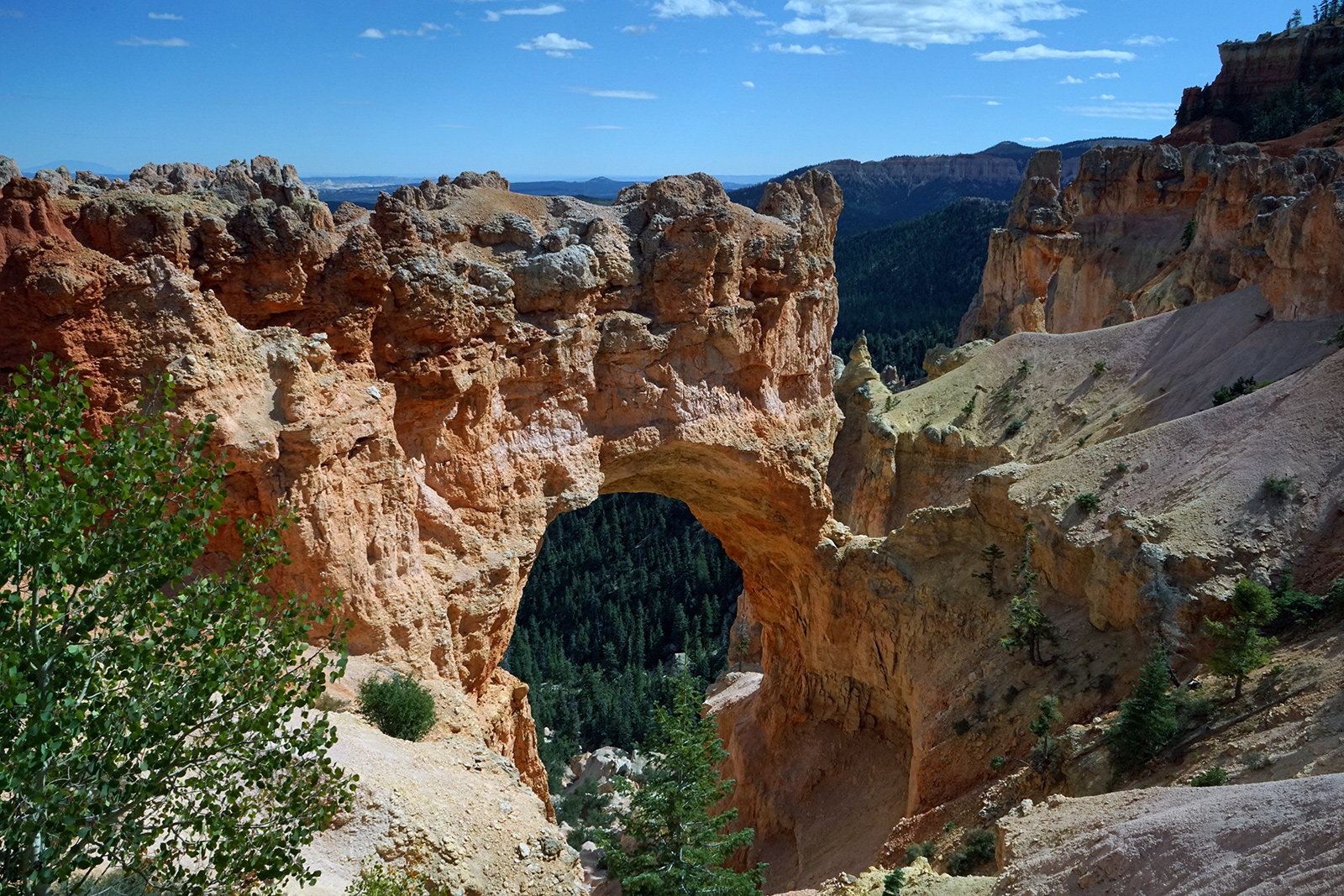 After a crazy couple days in Zion National Park, and with Tiffany feeling a bit under the weather, we took it pretty easy, and stopped at the scenic overlooks. We would love to return and get a different perspective of the park by hiking through the chimneys someday. 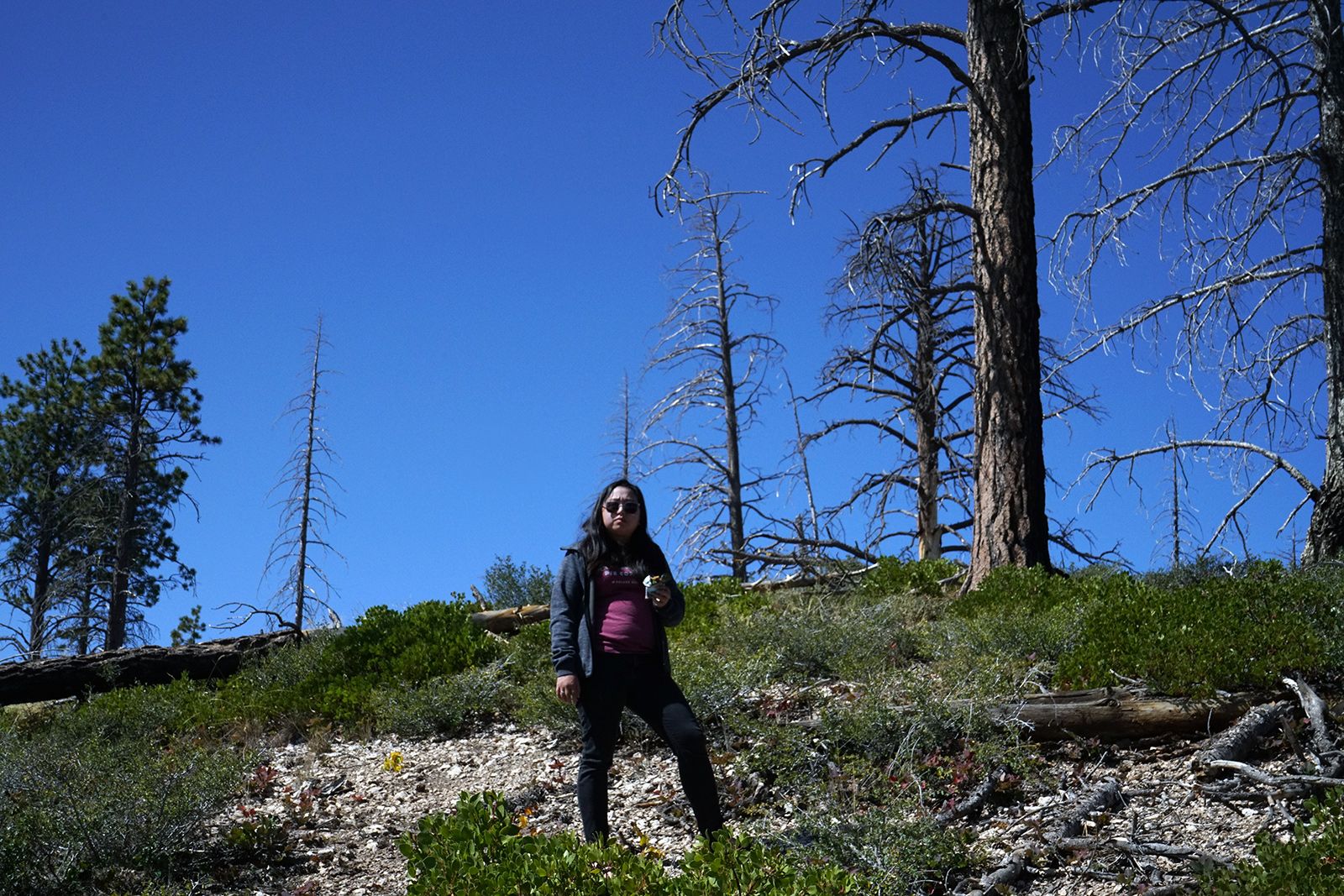 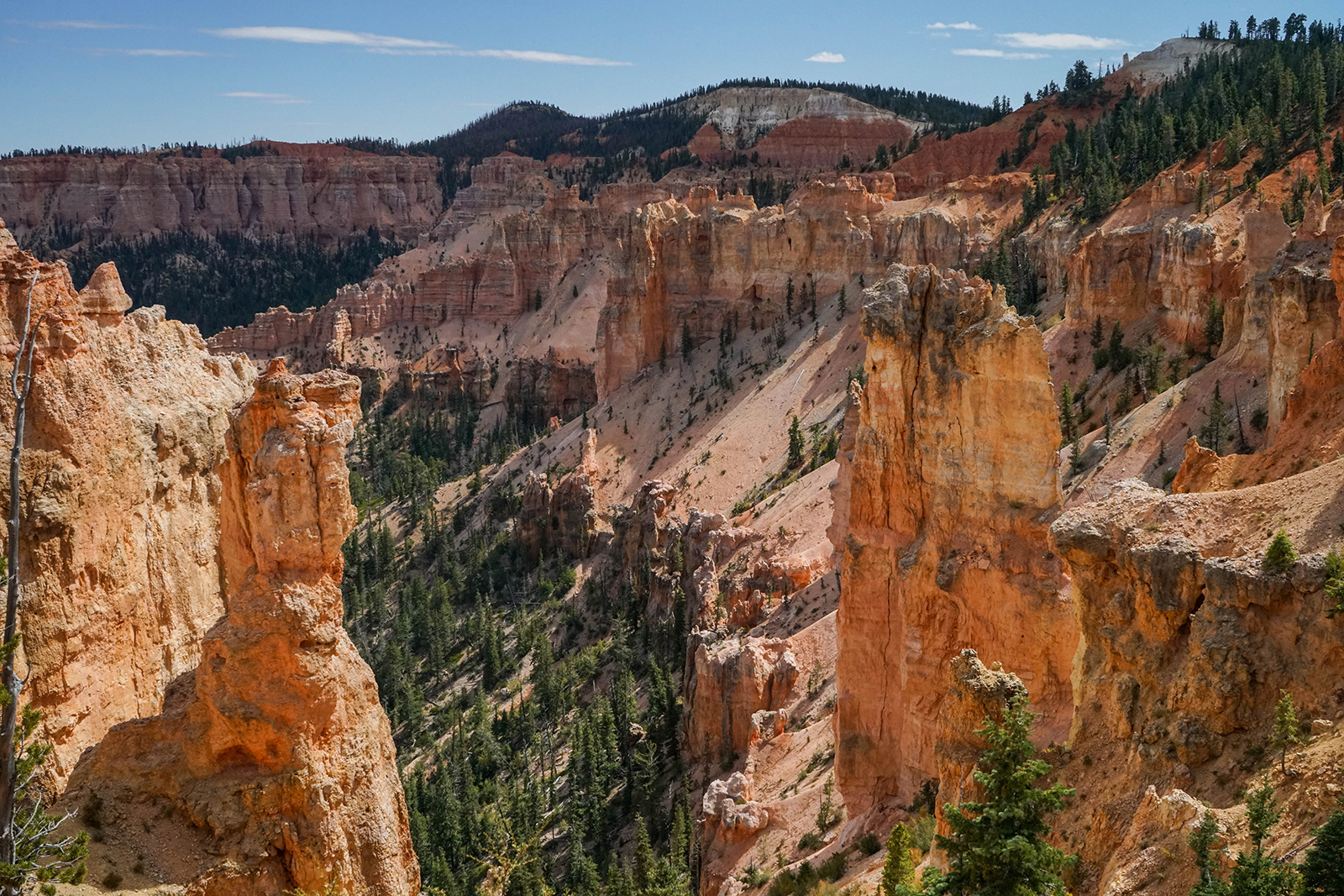 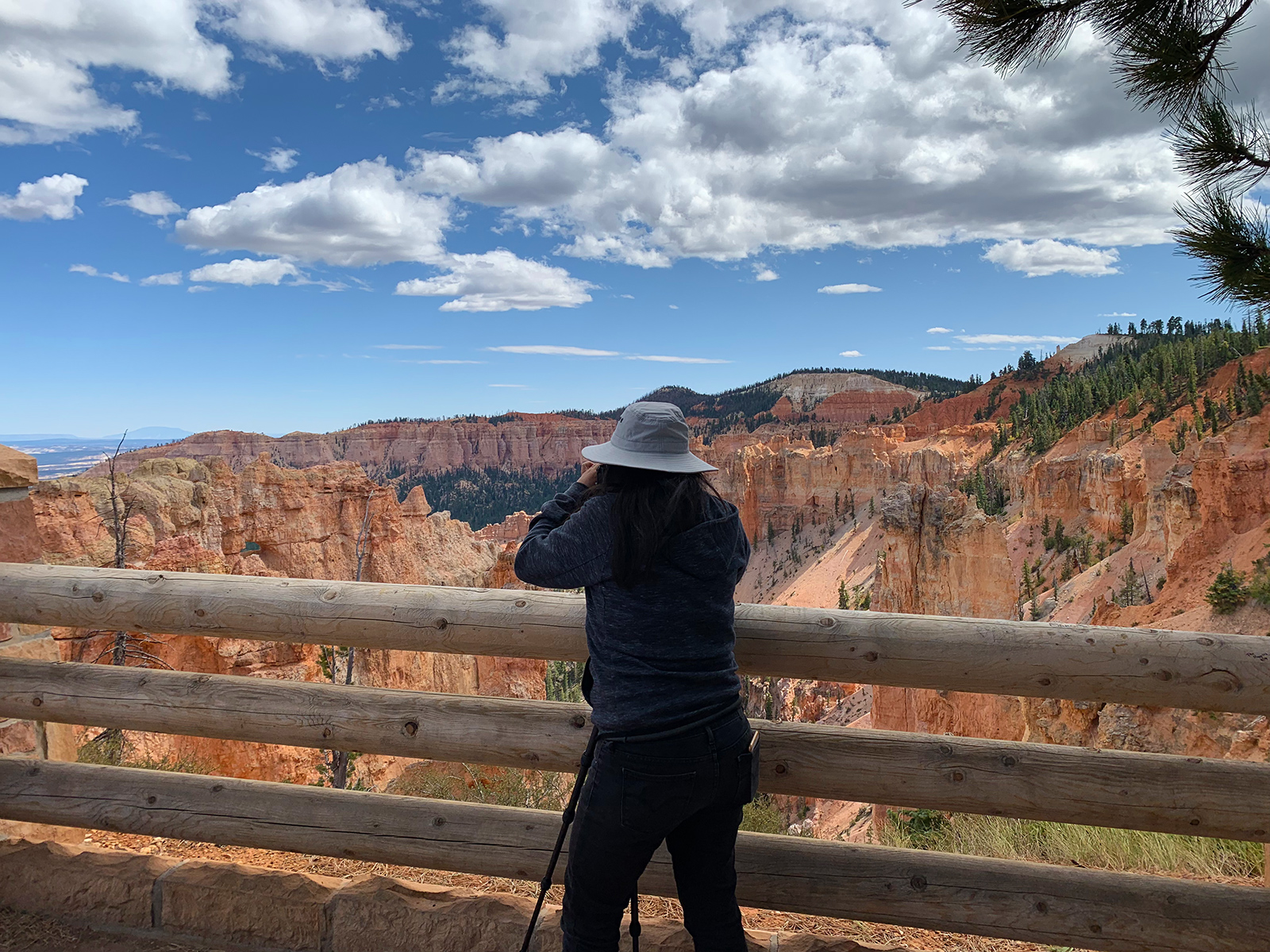 We have both done our fair share of scenic drives, and this road trip had more than a few amazing drives, but Utah State Road 12 is easily a highest category scenic drive. There were so few cars on the road which, when combined with the otherworldly rock formations, made us feel like we were driving on another planet. Or like we were in a car commercial. SR12 winds through the embattled Grand Staircase-Escalante National Monument which, in our humble opinion, clearly deserves national park status, not mineral extraction. You decide for yourself. 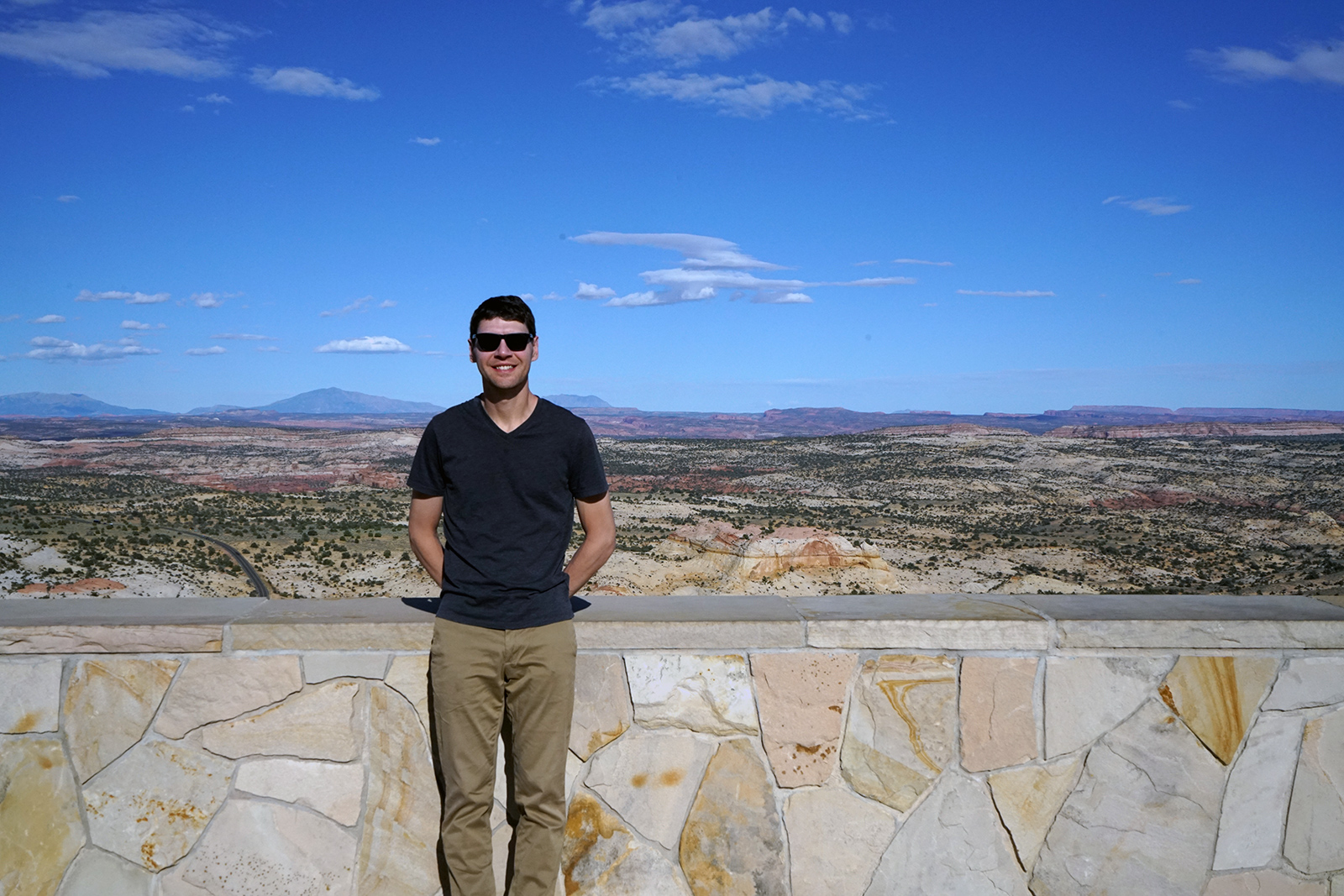 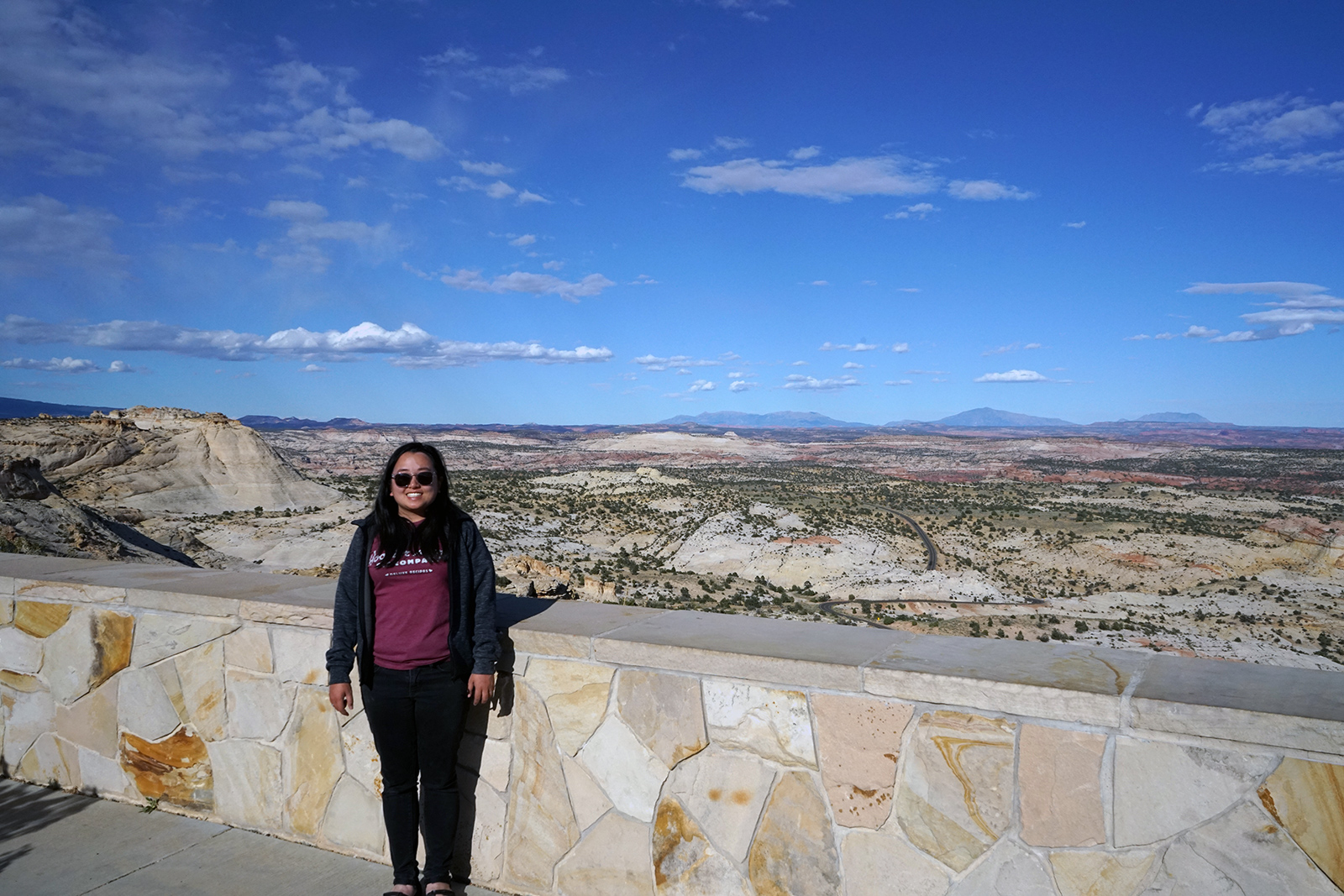 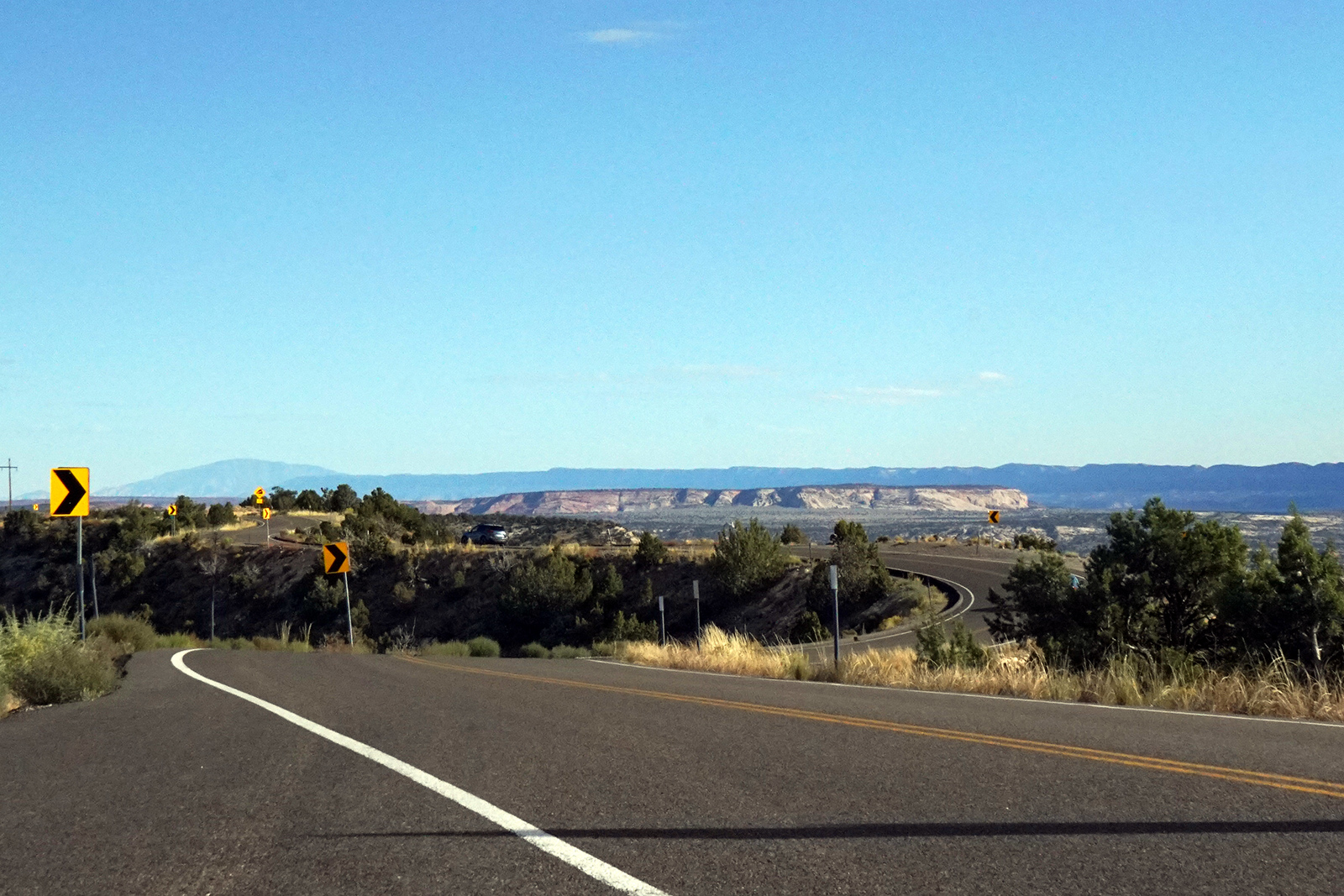 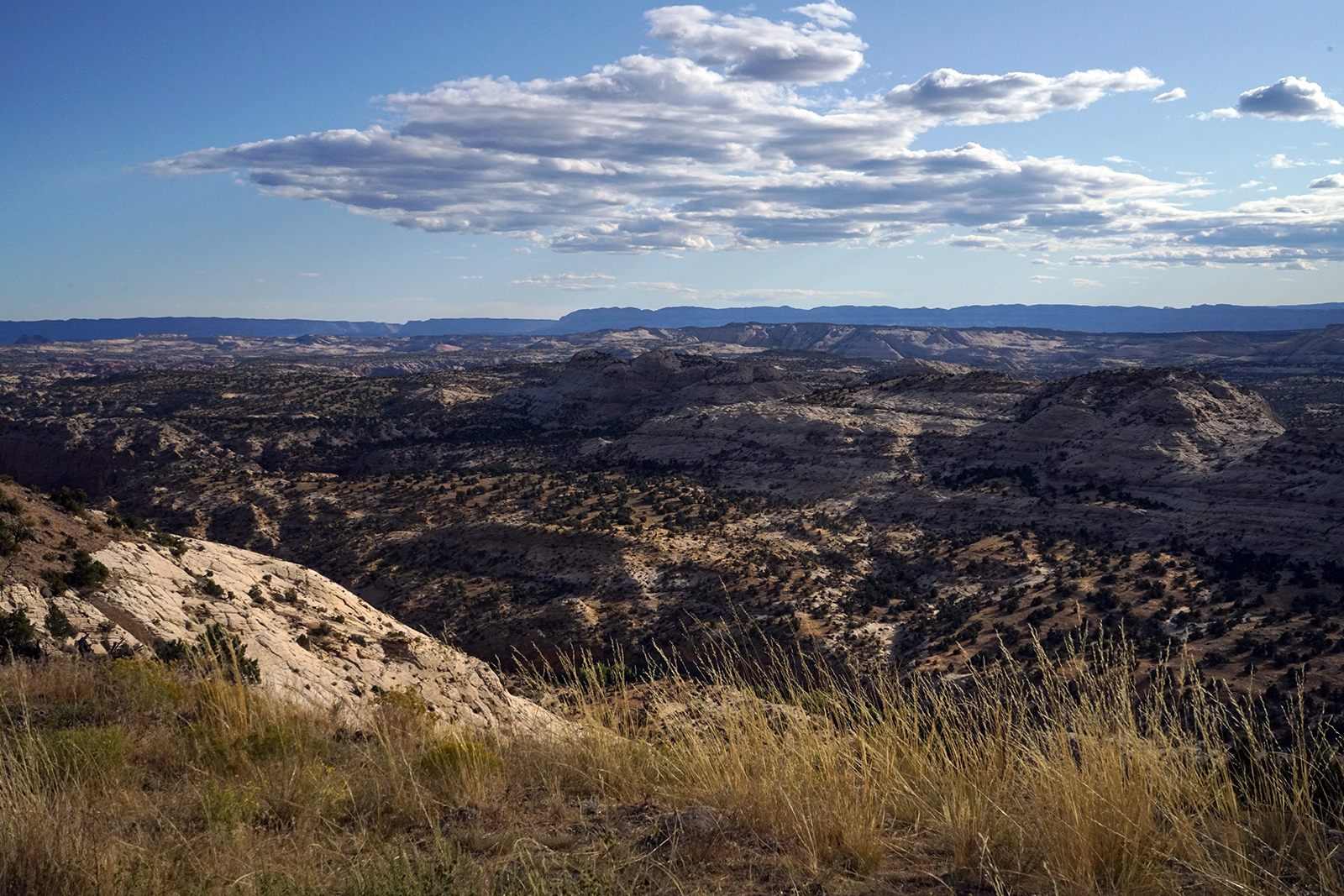 As the road wound up into the mountains near Capitol Reef National Park, we passed many signs for open range cattle. Sure enough, we saw several along the side of the road.

We eventually made it to a campsite where, despite the many bear warnings, all we could hear was the mooing of more cows. We had a puzzling but amusing interaction with a man who we thought was the camp host (since he was parked in the camp host site) but instead claimed to be bootlegging. He would not sell us any firewood... we are not sure if he was trying to sell us anything else.

We drove into the nearest town to buy some firewood and stop in at the local diner for some burgers. At this point in the trip our daytime diet generally consisted of multiple Clif Bars, tortilla chips, and some fruit, so each time we arrived in a town to get a real meal we were quite excited. We were also excited to arrive in restaurants to steal their electricity and charge our equipment. The photographic scenery really eats up battery life.

Our campsite was at nearly 9,000 ft of elevation, so it was another cold night. But it is truly impressive how effective a tent’s rainfly is at trapping in warmth. It’s like they engineered these things with a purpose. 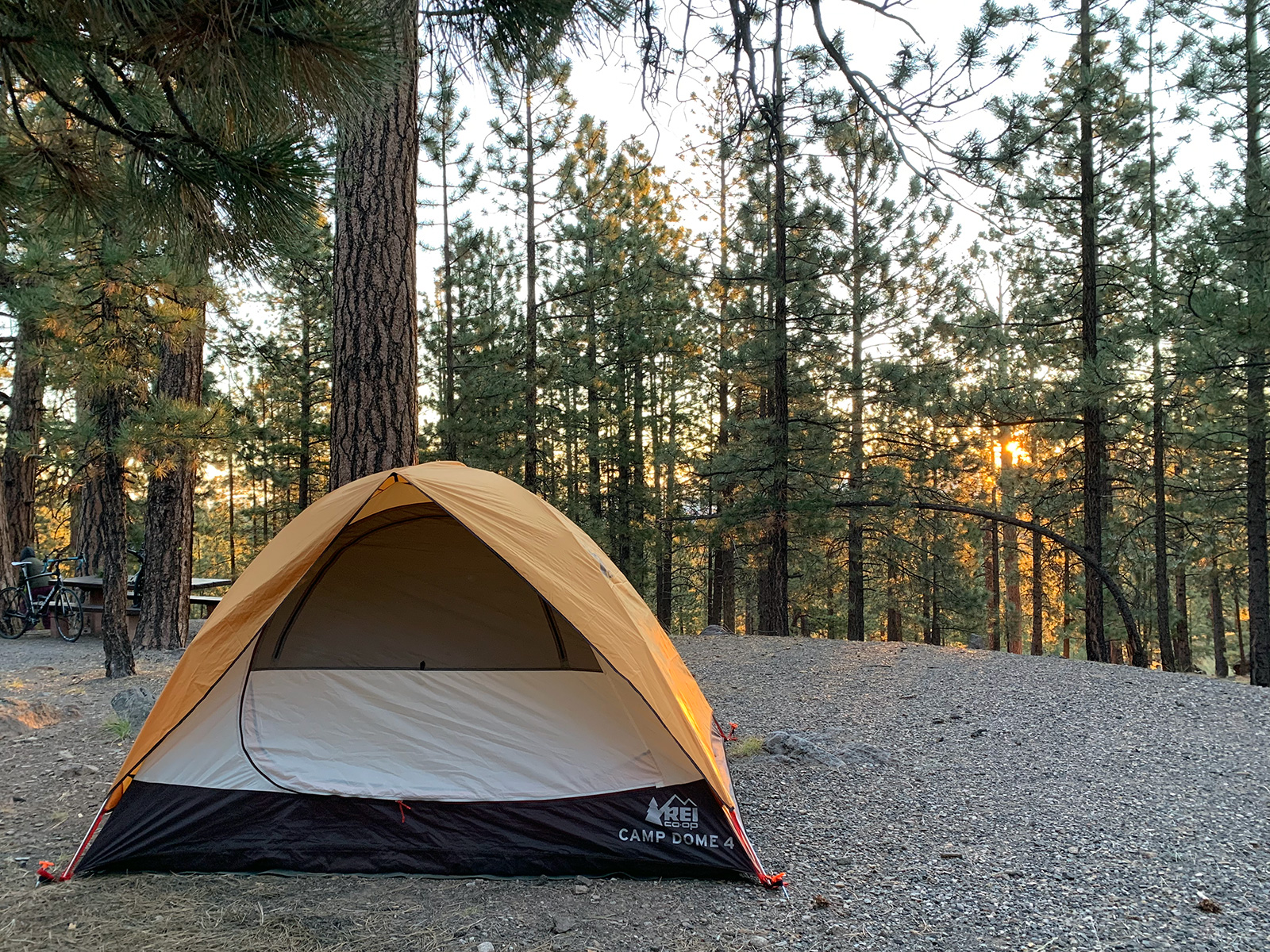