An incredibly scenic drive, red rock bluffs, and apple picking all in one park.

Capitol Reef was the least popular national park we visited in Utah, a nice break from Zion and Bryce, and brief respite before Moab. It is also among the youngest national parks in the U.S., having opened in the early 70s.

We took another leisurely morning, preparing breakfast and having a fire. As we mentioned in the post about Bryce, our campsite was over 8,500 ft elevation, and the overnight temperature dropped to right around freezing, so it was nice to use some of the firewood we purchased in town.

The drive to Capitol Reef continued some of the tremendous beauty from the previous day’s State Route 12 drive, along with more cattle on the road. We stopped a few places to take in the beauty.

We were eager to learn why the park is named “Capitol Reef.” Turns out, the area was formerly known as “Wayne Wonderland” in the early 20th century, which is an amazing name. But the towering white sandstone domes throughout the park bear some resemblance to capitol buildings, and the reef refers to the barrier-like nature of the landscape - hence “Capitol Reef.” Unfortunately, you can’t buy “Wayne Wonderland” merchandise at the visitor center.

Most of the park is free except for driving on the scenic drive. Unlike Bryce Canyon where you drive along the ridge of the canyon, here the colorful rocks tower next to the road.

Capitol Reef is a huge park, with the majority actually only accessible by high clearance vehicles with 4WD. Given that we had to go find a campsite in Moab later that day, we decided to not chance driving the Civic on the off-roading paths and instead stayed to the paved scenic road and wandered on foot a little into the canyon to see what the fuss was about. 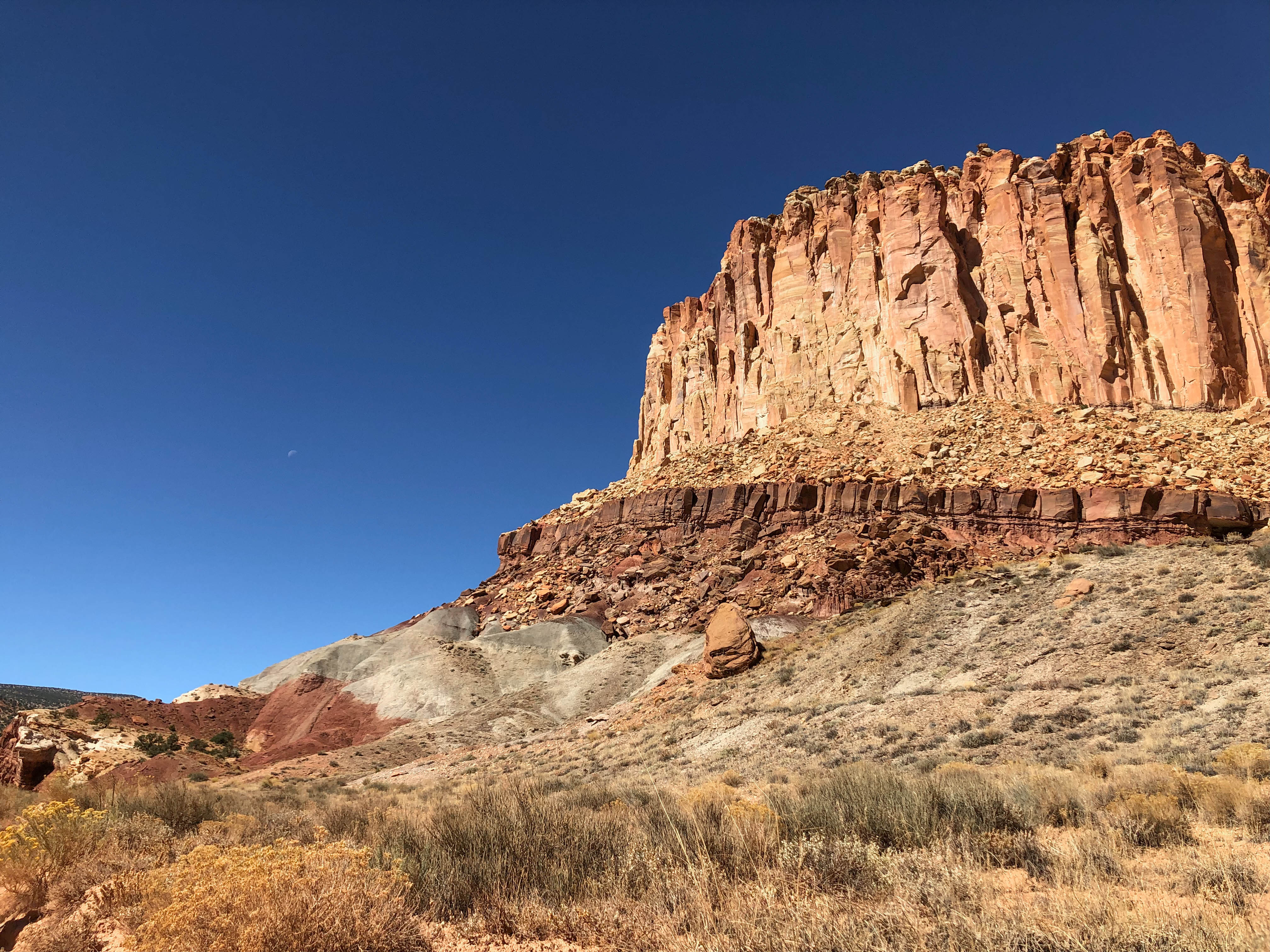 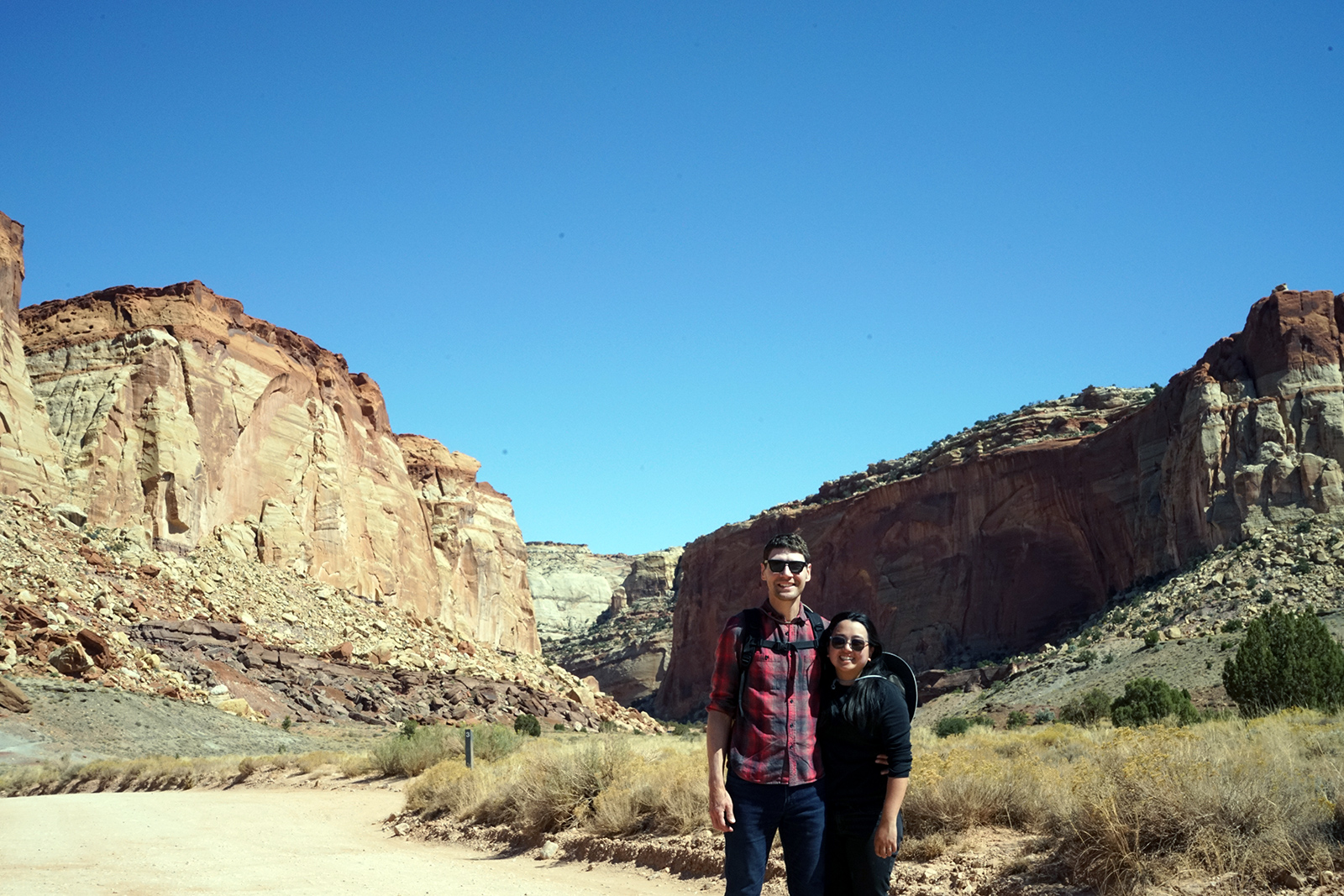 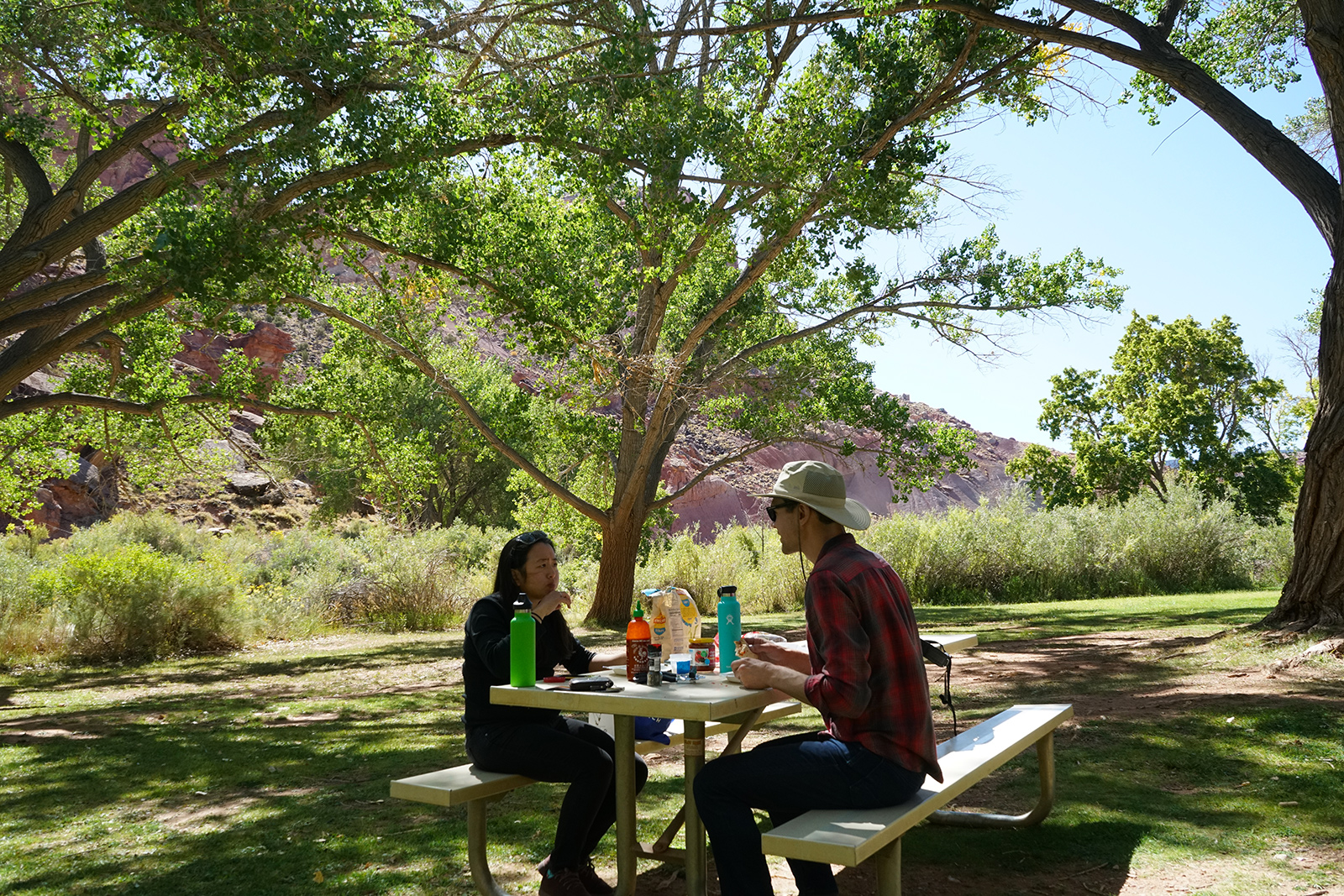 We did partake in one unique activity at Capitol Reef by picking some fruit in their fruit orchards. The park is home to actively maintained groves of cherries, pears, apples, and strawberries, and visitors to the park can pick and sample as many fruits as they desire, and pay a nominal price (i.e. $1/lb) to take some home. The orchard was populated by a pack of seriously calm deer, who were preoccupied eating the grass and fertilizing the grounds.

While we were there, apples were in season and the pears were about to ripen. We walked around sampling a few varieties (there really were just red apples, yellow apples, and pears). Overall, the yellow apples were preferable to the red apples, but the environment and novelty factor was what made this classic #WhiteAutumn activity truly enjoyable. We picked several to take with us on the road and then hurried back on the road to look for a campsite in Moab

The drive from Capitol Reef to Moab was a continuation of SR 12 so naturally it was also astounding. It seemed like every 10 miles or so there was suddenly a new geological formation on the horizon that was just as interesting as the last. 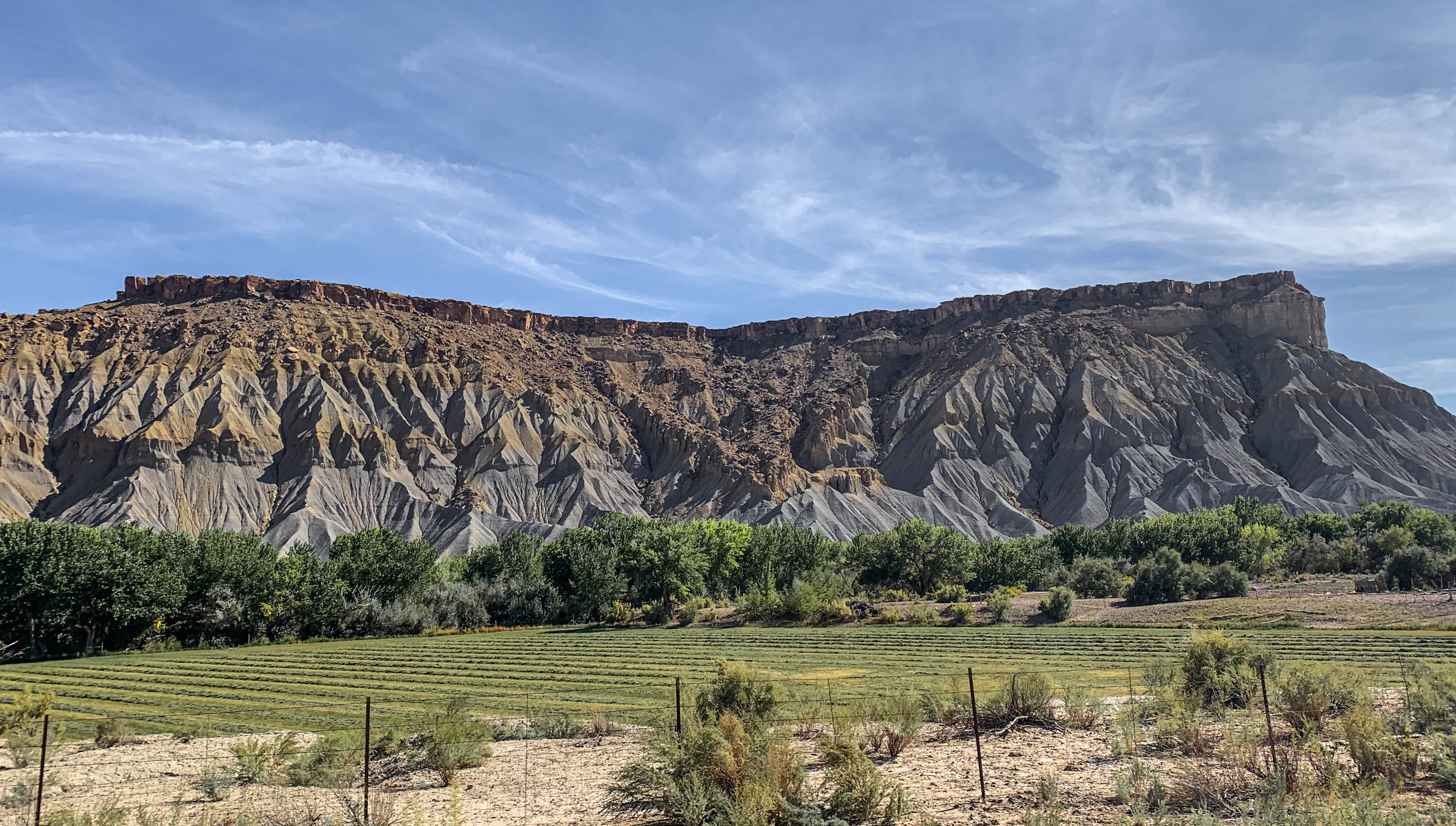 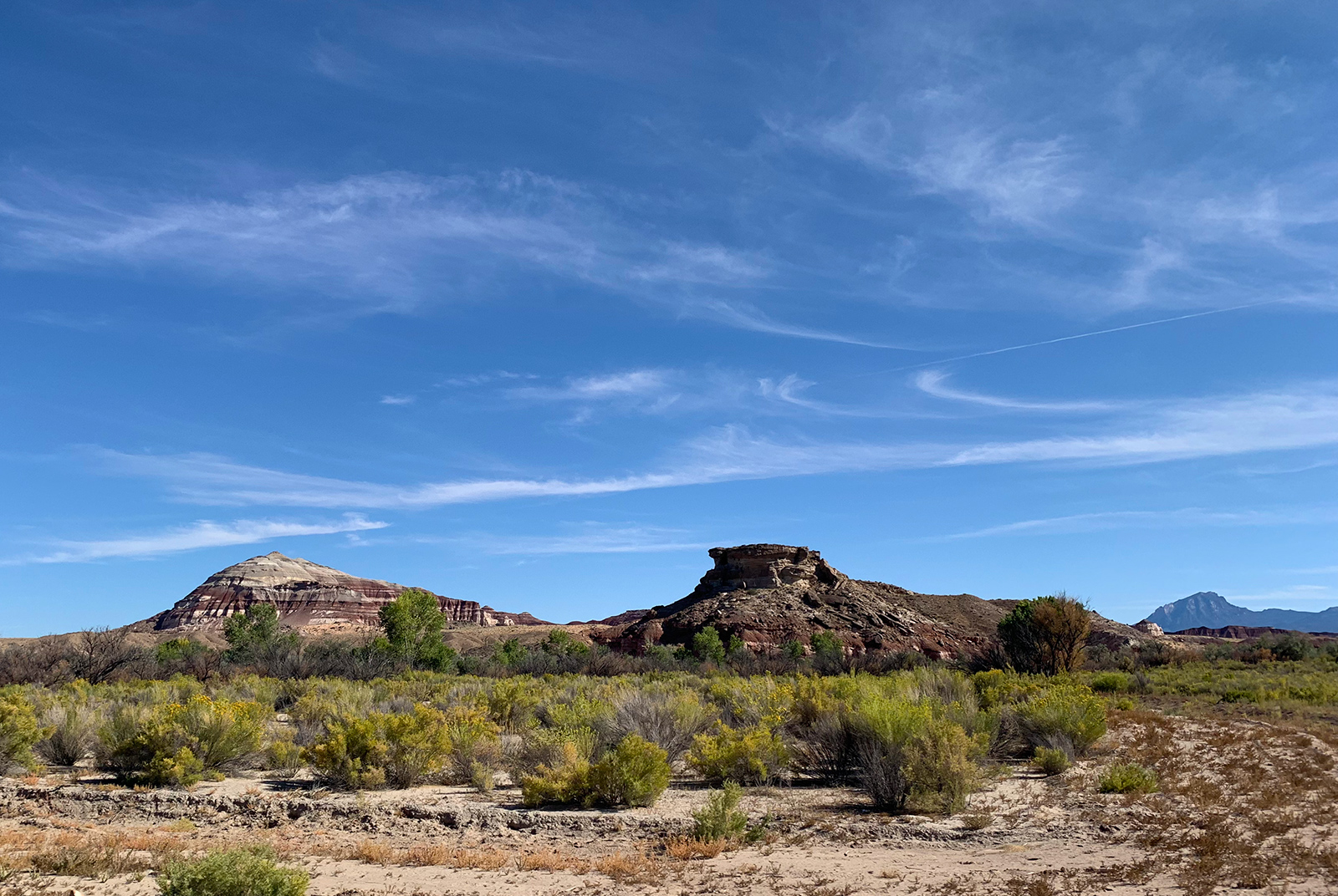 We were so engrossed by the scenery that we drove 20 miles out of the way. Such is the way of the road; you can even find beauty in the wrong place.

We arrived in Moab around sunset which is a great time to be introduced to the natural beauty of Moab -- except if you are also looking for non-reservable campsites. Even though we arrived on Sunday afternoon, the first nine campgrounds we drove by were completely full. Eventually after some stress about whether we would have enough gas, connectivity, or light, we found an amazing campsite with an amazing name (Horse Thief Campground) located between Arches and Canyonlands National Parks. We pitched our tent while watching the sunset and ventured into Moab for some food, groceries, and, you guessed it, outlets to charge our stuff. 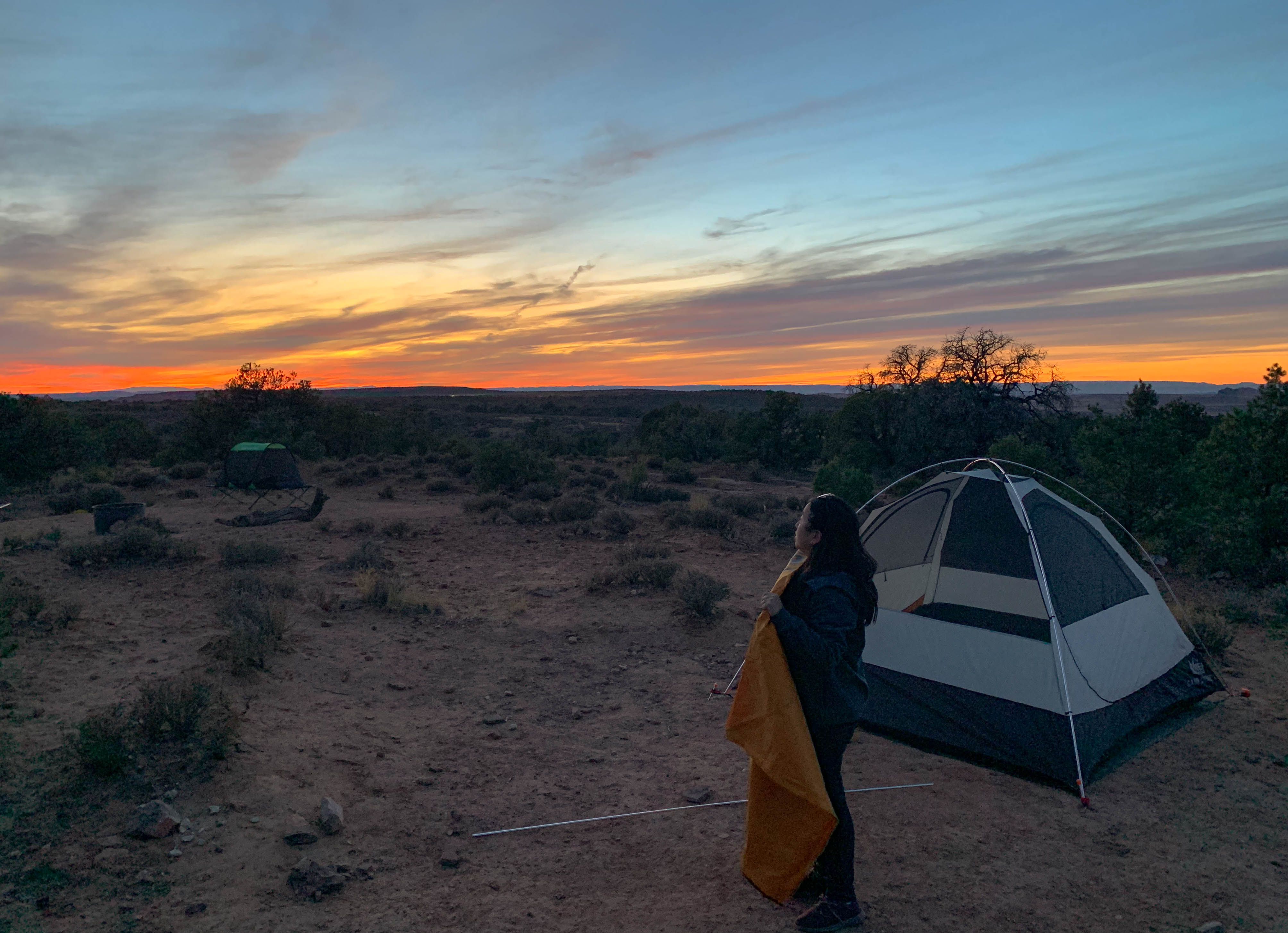 In Moab we encountered our first stop lights in 50+ hours which meant we were finally kind of in civilization. While Moab mostly just caters to tourists visiting for the landscape and outdoor fun, it turns out that they are much more technologically advanced than we expected. Before we headed to dinner and electric outlets we stopped at one of the most well-stocked grocery stores we have ever been to. It also employed a robot to clean the floors, although Tiffany definitely got scolded by the store manager for testing out its spatial awareness.

After a very underwhelming dinner at Moab Brewing, our night ended at a McDonald’s in attempt to charge our electronics before heading back to our primitive campground. McDonald’s brightened our outlook on food in Moab with some free pies, free wifi, and free electricity! Thanks Ronald!