A daytrip to the most unique cathedral we have ever seen

When we first got to Bogota, our lives had been so busy up to us leaving the country that we had no idea (other than a crazy restaurant, more on that later) of what to do. Some googling revealed that there was an interesting Catholic cathedral in an old salt mine. Unfortunately, we learned it was in a small town some 40-some kilometers away from Bogota. We figured it would probably be too difficult to get to, and stayed focused on visiting things within the capital city.

But one Sunday when we visited an English-speaking church in Bogota, Brian chatted with a random local, and the one suggestion we got was that since we like visiting old churches, we had to go to the Salt Cathedral. So we decided to make it happen.

After some additional googling, we found a way to get there using local buses. After about a week of Spanish classes and almost two weeks of navigating our way through Bogota, we figured we were equipped to pass this test. Plus once Brian learned that the cathedral was located in Zipaquira, hometown of 2019 Tour de France winner Egan Bernal, there was no turning back.

It ended up being one of our favorite sites in Colombia.

The bus ride out of Bogota itself was uneventful, but it was great to get out of our 5 mile radius of Bogota and see the rest of the city, along with some suburbs, and more green areas. When we reached the center of Zipaquira, the guys on the bus were super helpful and instructed anyone looking for the Catedral de Sal to get off. Plus a stranger on the street gave us exact directions on how to get there.

Zipaquira was founded in the 1600s so the historic center of town was fascinating and beautiful itself.

After walking through historic Zipaquira, we continued following signs to the Catedral de Sal. Unfortunately, this meant that we had to essentially climb a mountain to get to the entrance. At nearly 9,000 ft of elevation, it was no joke.

Once we got to the top, we bought our tickets and were instructed to go to another booth to get an audio guide in English. When we inquired about the audio guide, the person instructed us to stand to the side and suddenly a guy walked up to us. Turns out we had our own personal docent/guide included in the price of our ticket! Everyone else just had the audio guides, but for some reason we got a live guide.

Anyways, after descending a bit into the former mine and learning the geological history of the mine, we came upon some of the most interesting Stations of the Cross we have ever seen. Traditionally, when you walk through a cathedral, you see the events of Christ’s crucifixion depicted as murals or small sculptures on the walls, often graphically. At Catedral de Sal, their Stations are like art installations carved into the salt rock. Each station was created by a different local artist and interpreted the different stages more metaphorically than traditional stations. The guide provided insight into the technique of each station as well as more context about where we were in the mine, and how the unique salt mine features affected the creation and future of the cathedral. 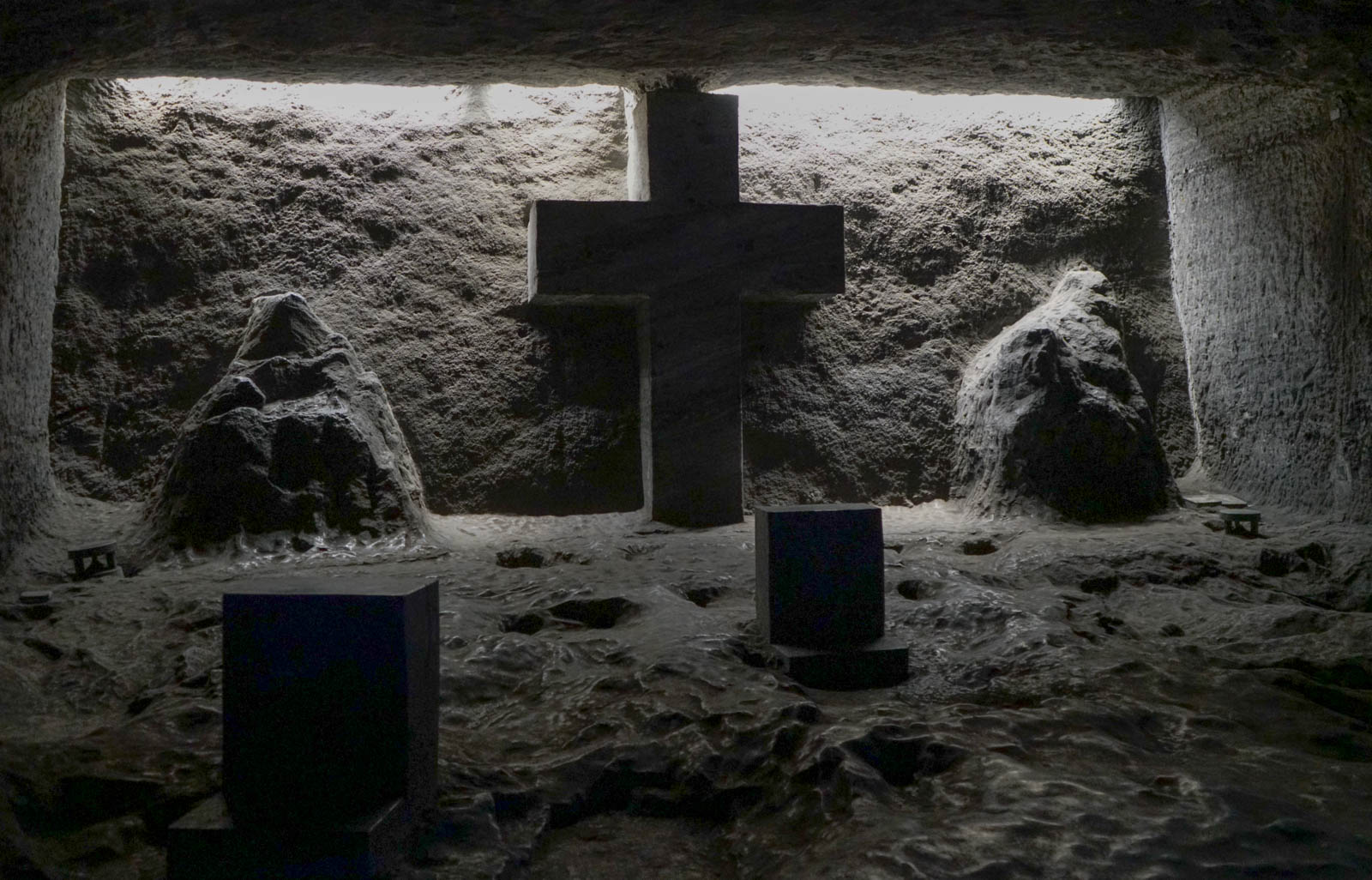 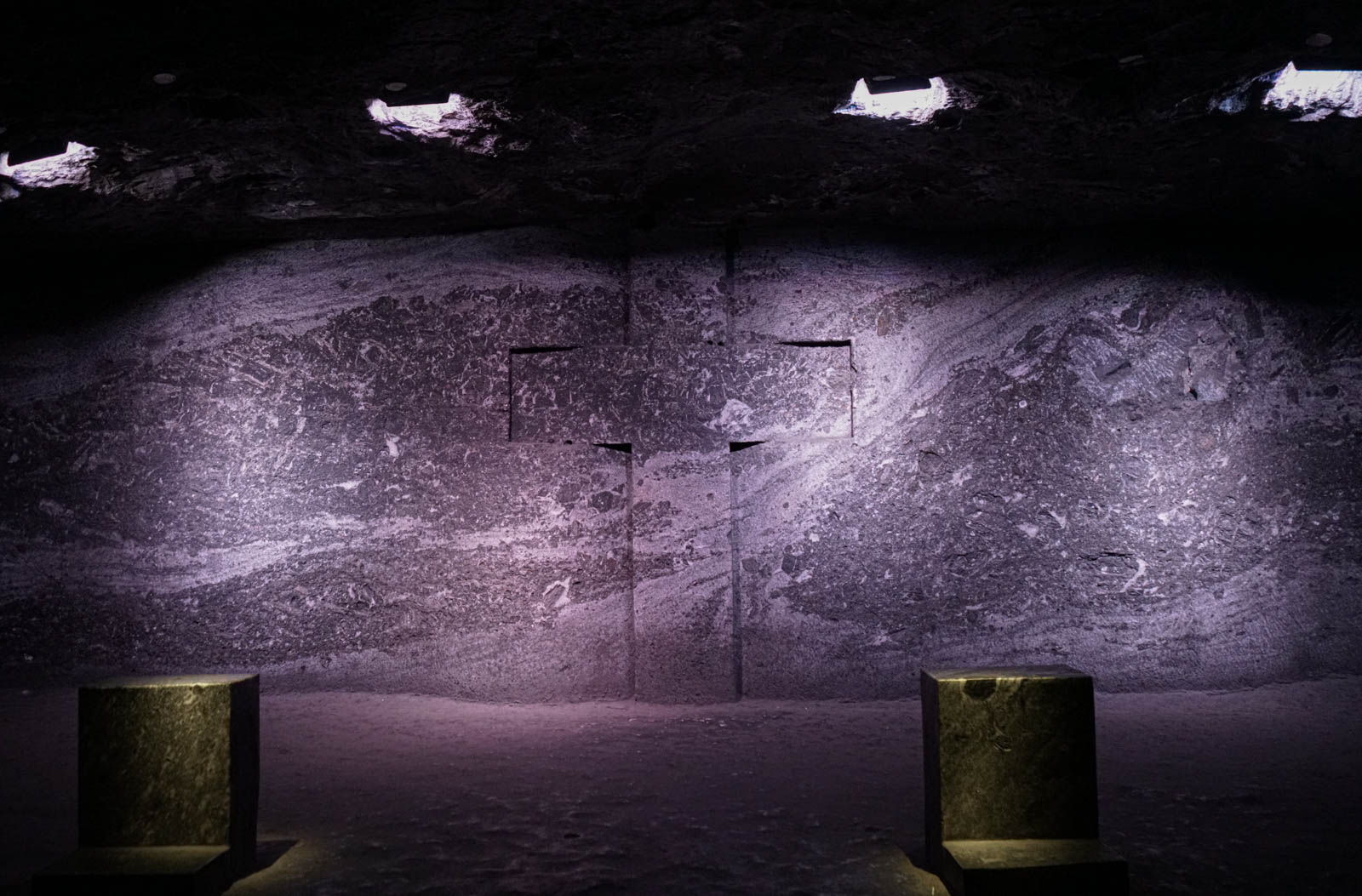 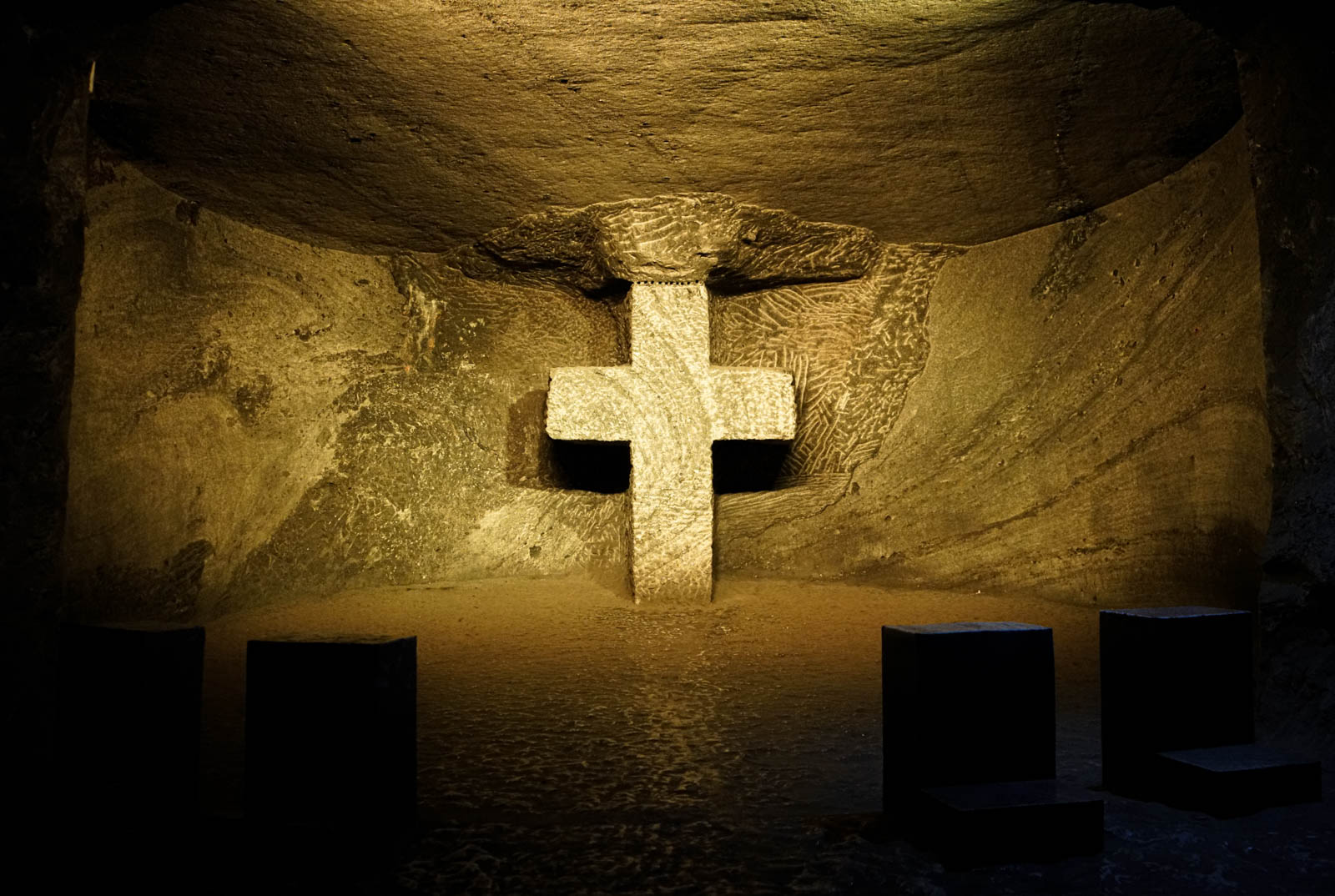 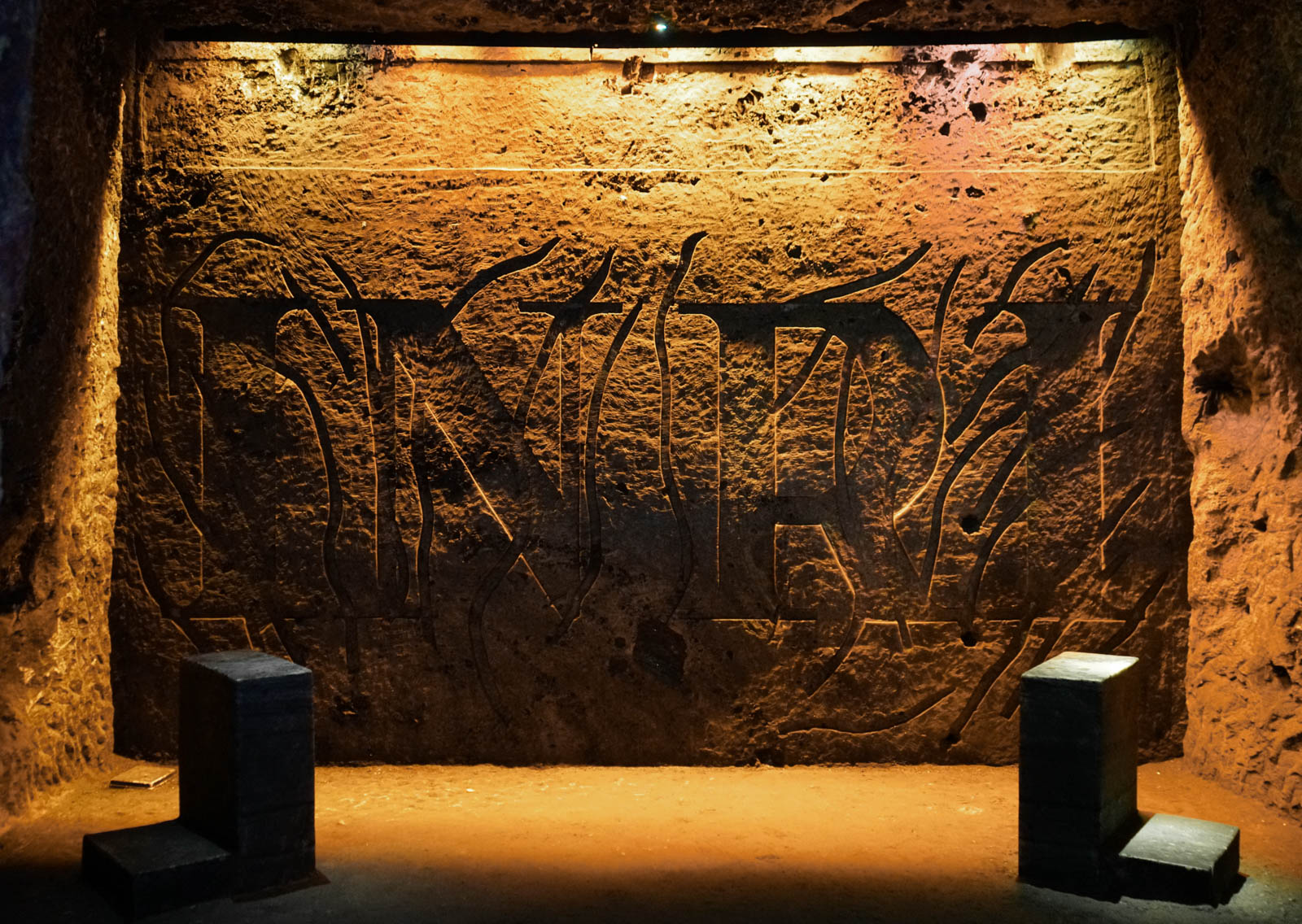 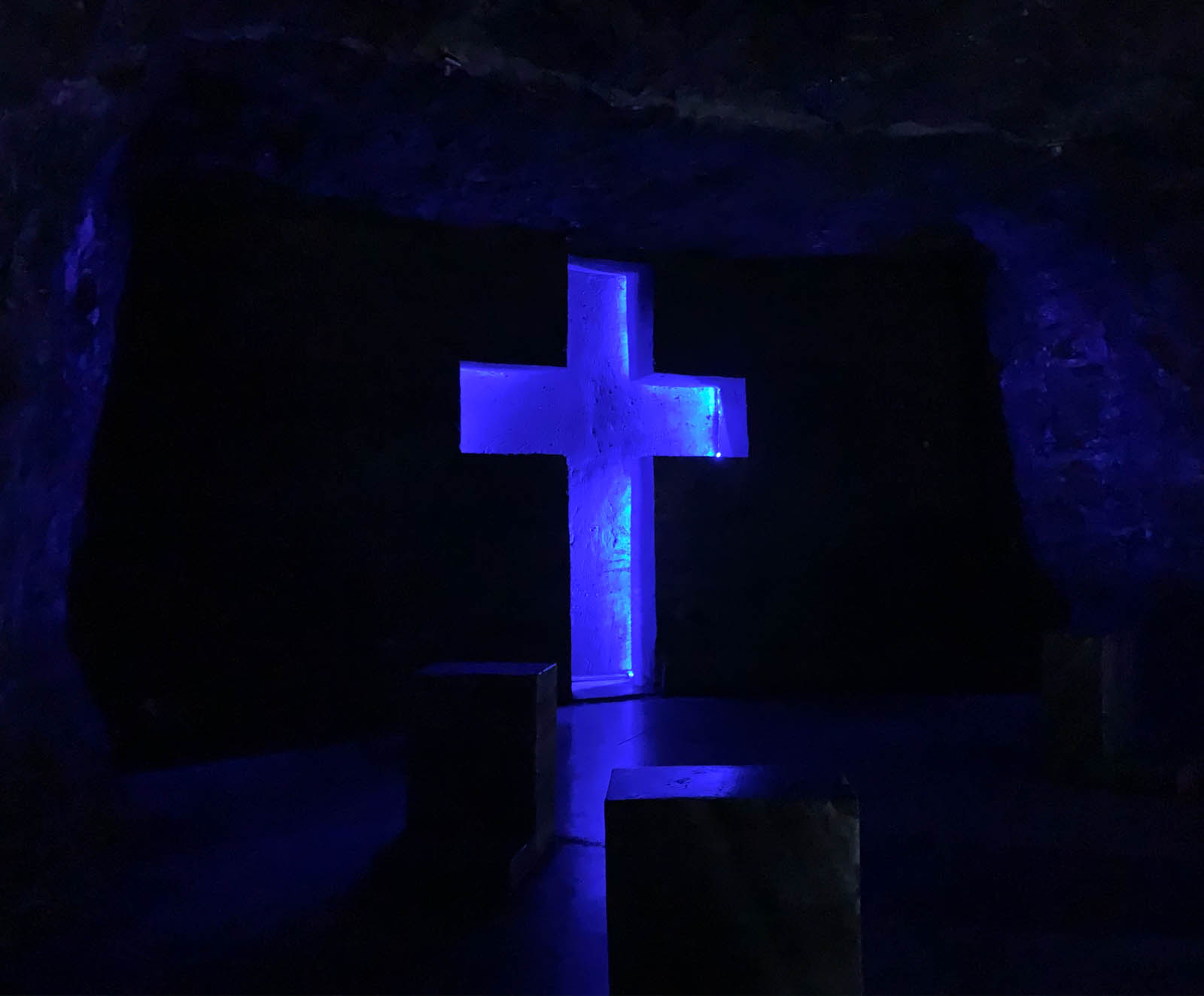 The Stations of the Cross is also known as “The Way of the Cross” or “The Painful Way,” and mirrors a pilgrimage traditionally taken in Jerusalem by early Christians, who walked the physical path from where Christ was condemned to death to the tomb where his body was laid. The Catedral de Sal is enormous and the entrance to the cathedral takes you on a very lengthy walk through these stations. The combination of walking through a cavernous mine, seeing these beautiful murals, and hearing ambient music echoing through the cathedral, is meditative and breathtaking.

After walking through the stations, we saw one of the cathedral’s naves from above. It was a truly impressive view.

Descending further, we saw each of the cathedral’s naves up close and personal. The confessionals are carved directly into rock (which makes for some rather resonant echoes), and the nativity scene was made entirely of rock as well. Even the chandeliers included pieces of the salt rock. We have both been to a lot of churches, cathedrals, and basilicas around the world and this was definitely one of the most unique and impressive. 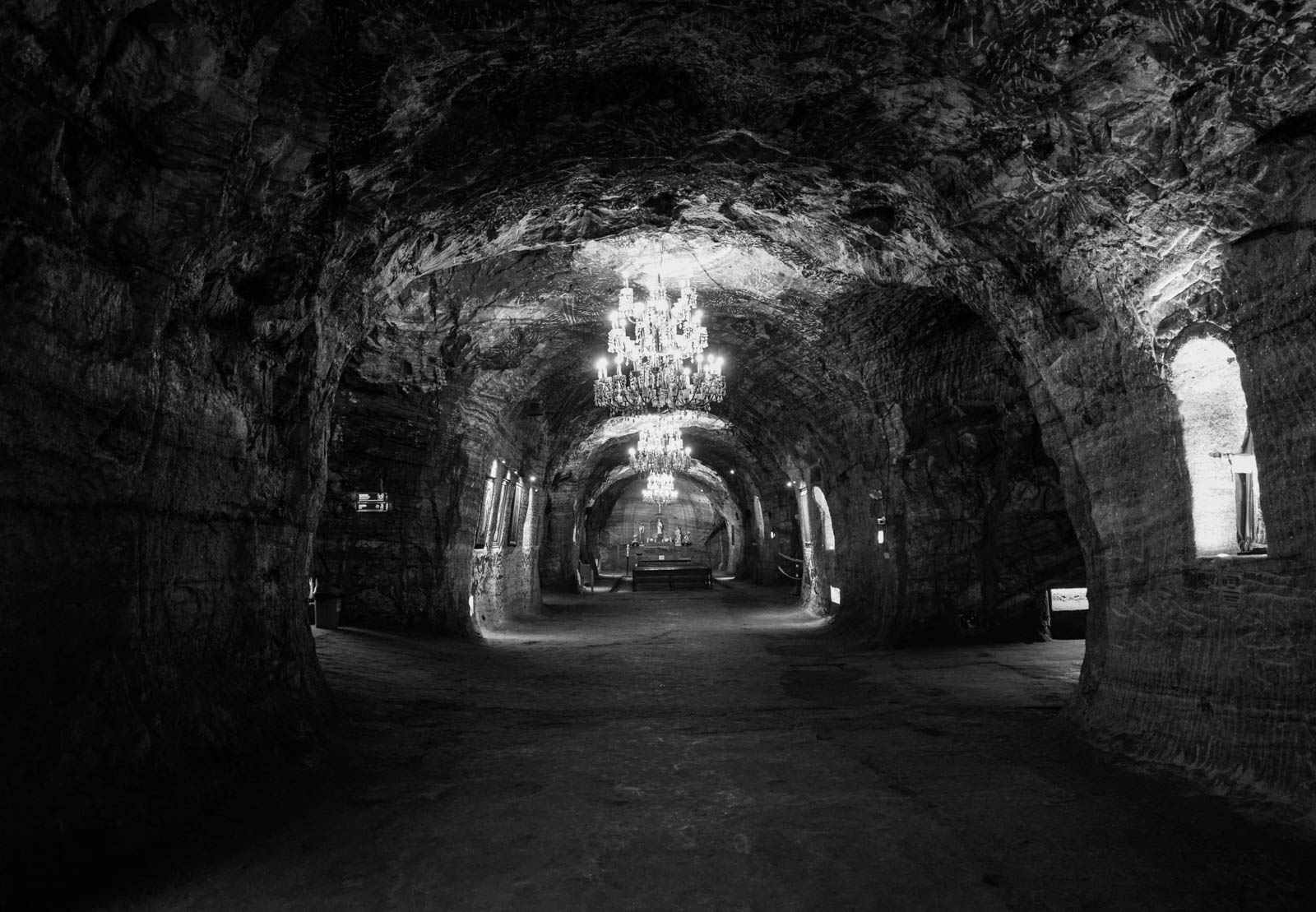 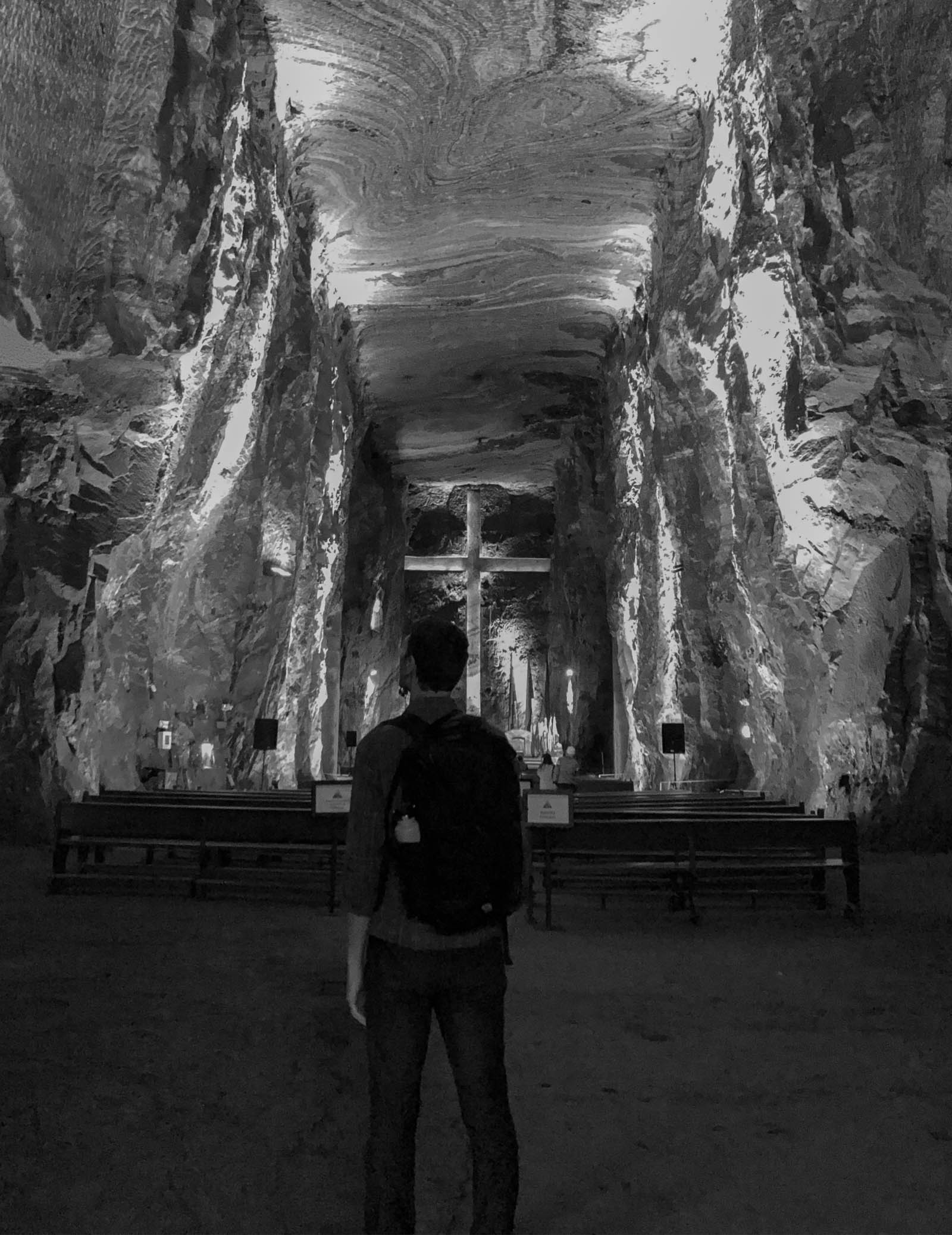 After showing us the cathedral our guide brought us to the “commerce area” of the cathedral. In true capitalist fashion, in addition to being a place of worship the salt cathedral is a place for tourists to spend their money. There were many Catholic, salt rock, and emerald (Colombia is apparently known for their high quality emeralds) items and tchotkes for sale in this area. We also walked through a strange re-creation of an emerald mine, complete with very lifelike dummies of miners.

To exit the cathedral you have to walk back up to the surface. We decided to take the stairs, which are at a 45 degree angle, back up to the stations of the cross. Our guide told us that if you are out of breath when you reach the top of the stairs, have many sins to atone for. You can guess how that went for us.

We took our time exiting back through the stations of the cross, stopping for many photos and enjoying the art. We took so long that the cathedral was actually closing down to visitors, and they turned off the constant Ave Maria soundtrack they had previously been playing. So we put on the closest thing to worship music we had on our phones (Ultralight Beam) and walked ourselves out soaking up the final moments in one of the most amazing structures we’ve ever visited.