Is this hiking’s Mecca?

A magical town in an Argentine national park

Los Glaciares National Park is not only home to the Perito Moreno glacier, but also a small town called El Chaltén, which is located in the national park but a four hour bus ride away from the glacier.

The day after we walked on the glacier, we caught the afternoon bus to El Chaltén. After a brief stop at a deserted hotel where Butch Cassidy and the Sundance Kid apparently once stayed, we made our way to El Chaltén.

We chose an afternoon bus because we were pretty tired of having to wake up early to catch a crowded (and sometimes stinky) bus to our next Patagonian location. Also we realized that since the sun would set at 10:30 pm, even if we got to our next destination at 5 pm we would have plenty of light to find our Airbnb, grocery stores, restaurants, etc. This decision paid off tremendously in El Chaltén, as we were able to check in to our Airbnb upon arrival and then got tips for local hikes we should check out while in town.

As we mentioned, El Chaltén sits within a national park. This means that amazing, beautiful hikes often start and end in town, and also there is no entrance fee. We decided to go on a short, easy hike (although at the time it seemed quite steep) before a late dinner that night. It gave us a nice distant view of the mountain that most people visit El Chaltén to see, Mount Fitz Roy. If it looks familiar it is because it is the mountain that the Patagonia logo is based on. 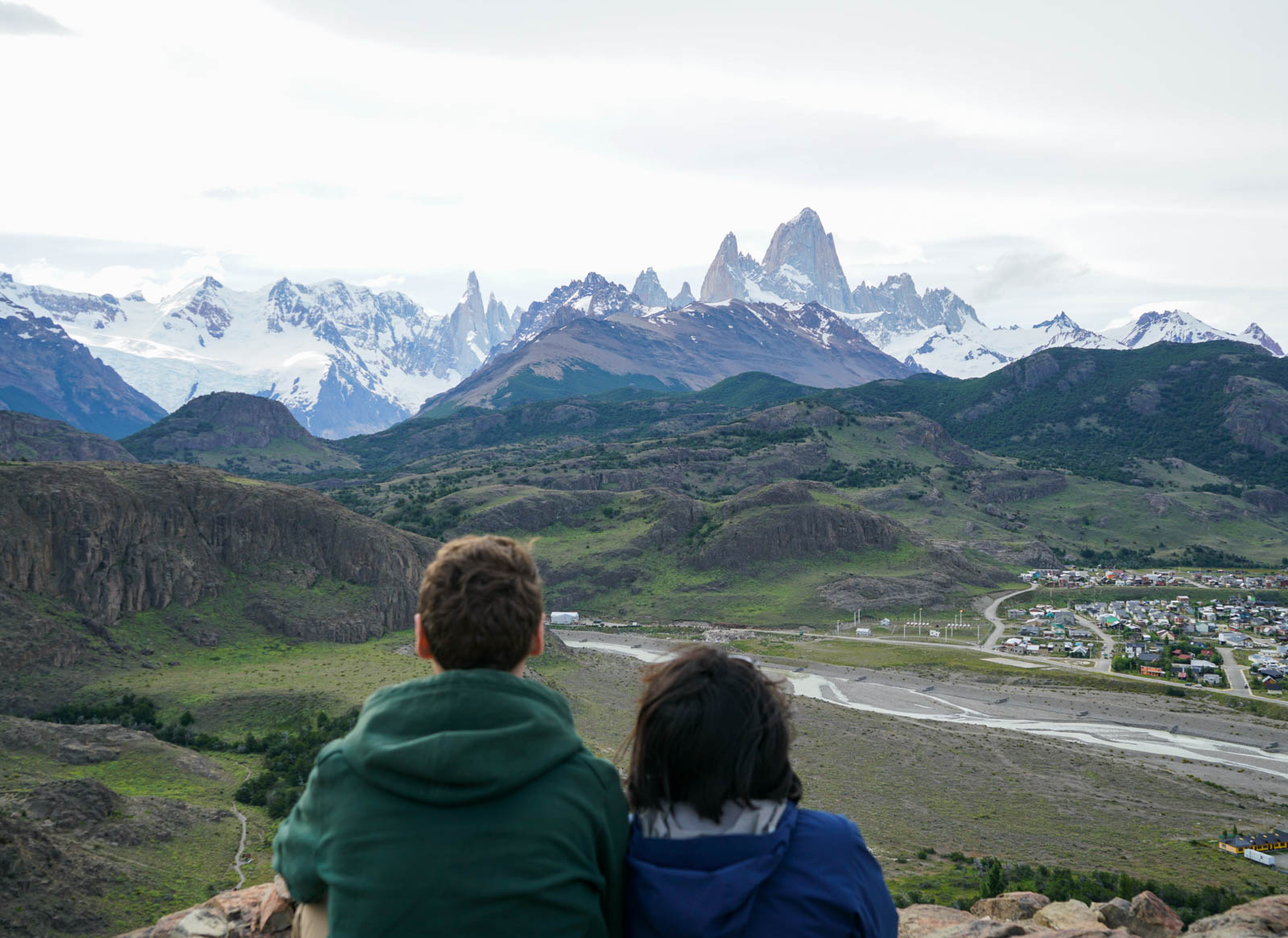 The next day we woke up early and caught a transfer to a trailhead that was located about 8 miles away from town. Actually we nearly missed our transfer by sleeping through our alarms but it all worked out in the end. We were headed to hike the most famous Mount Fitz Roy hike which our Airbnb host had told us was unmissable though busy. She also warned us that the last kilometer up to the mountain was “very steep steep,” but we were undaunted.

We arrived at the trailhead not only with everyone else in our van but also several other vans filled with hikers. We were a bit concerned about how crowded the trail would be, but we all spread out while hiking only to bunch up again when we reached a viewpoint. Most of the viewpoints on this trail gave us impressive and differing opportunities to see more distant glaciers. 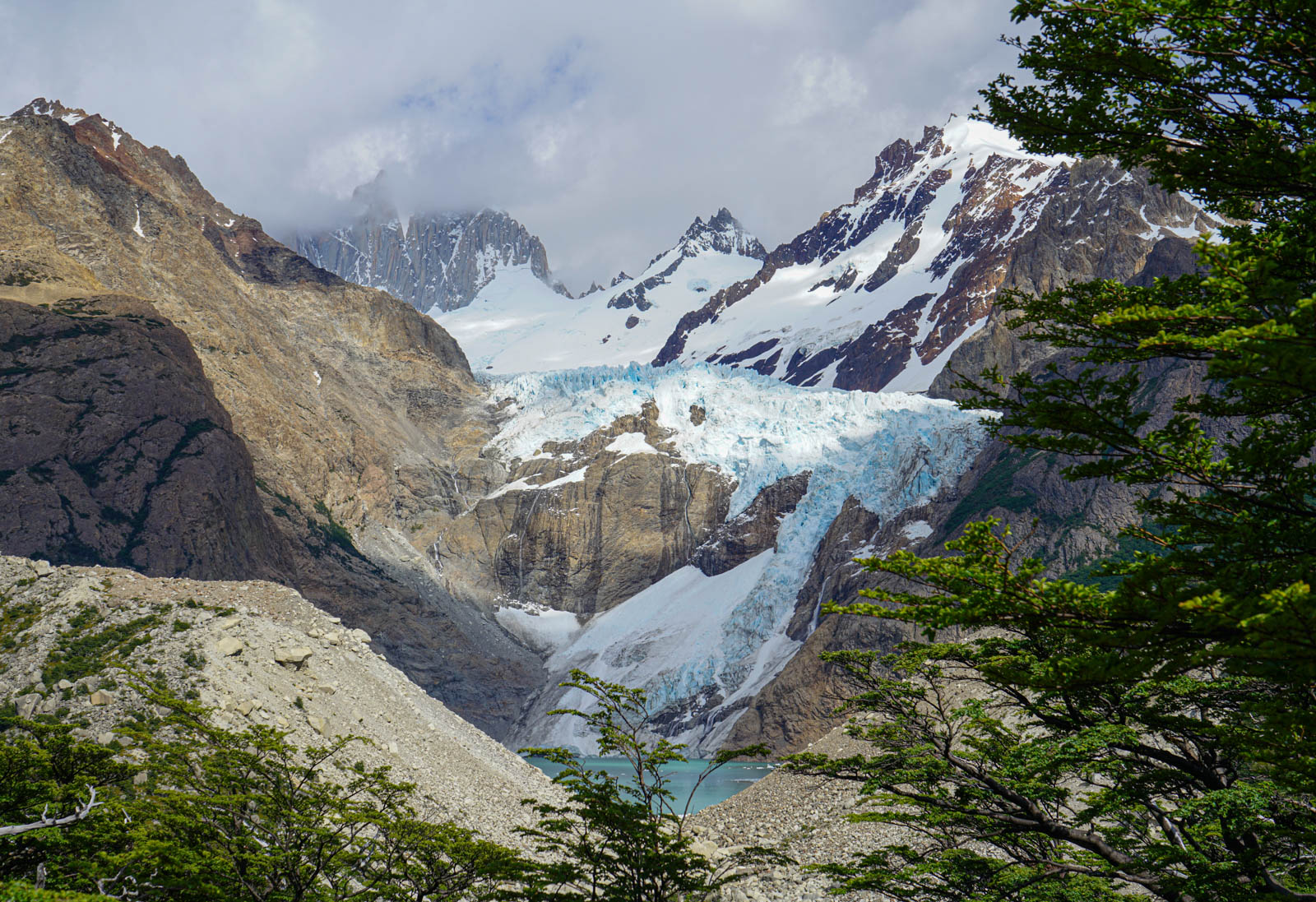 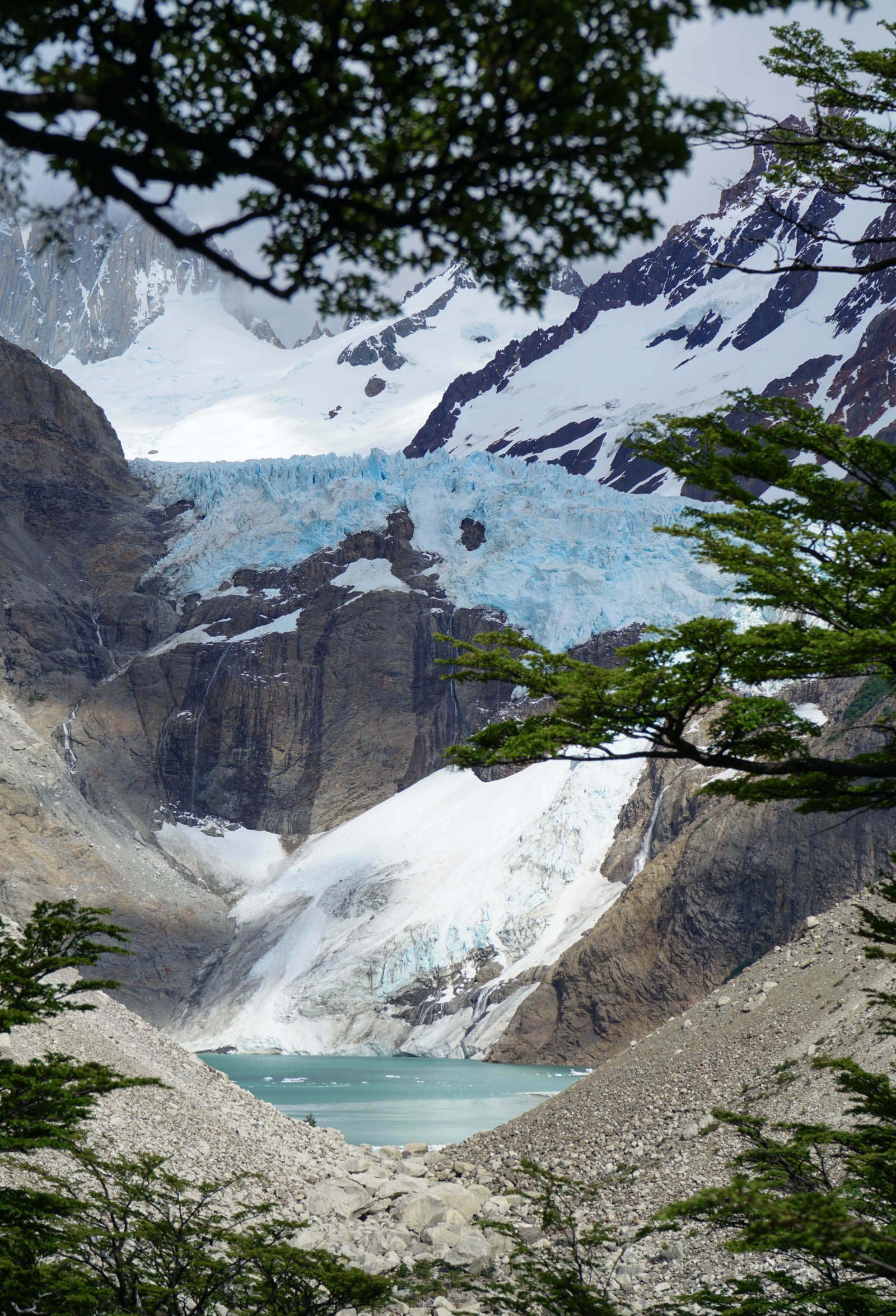 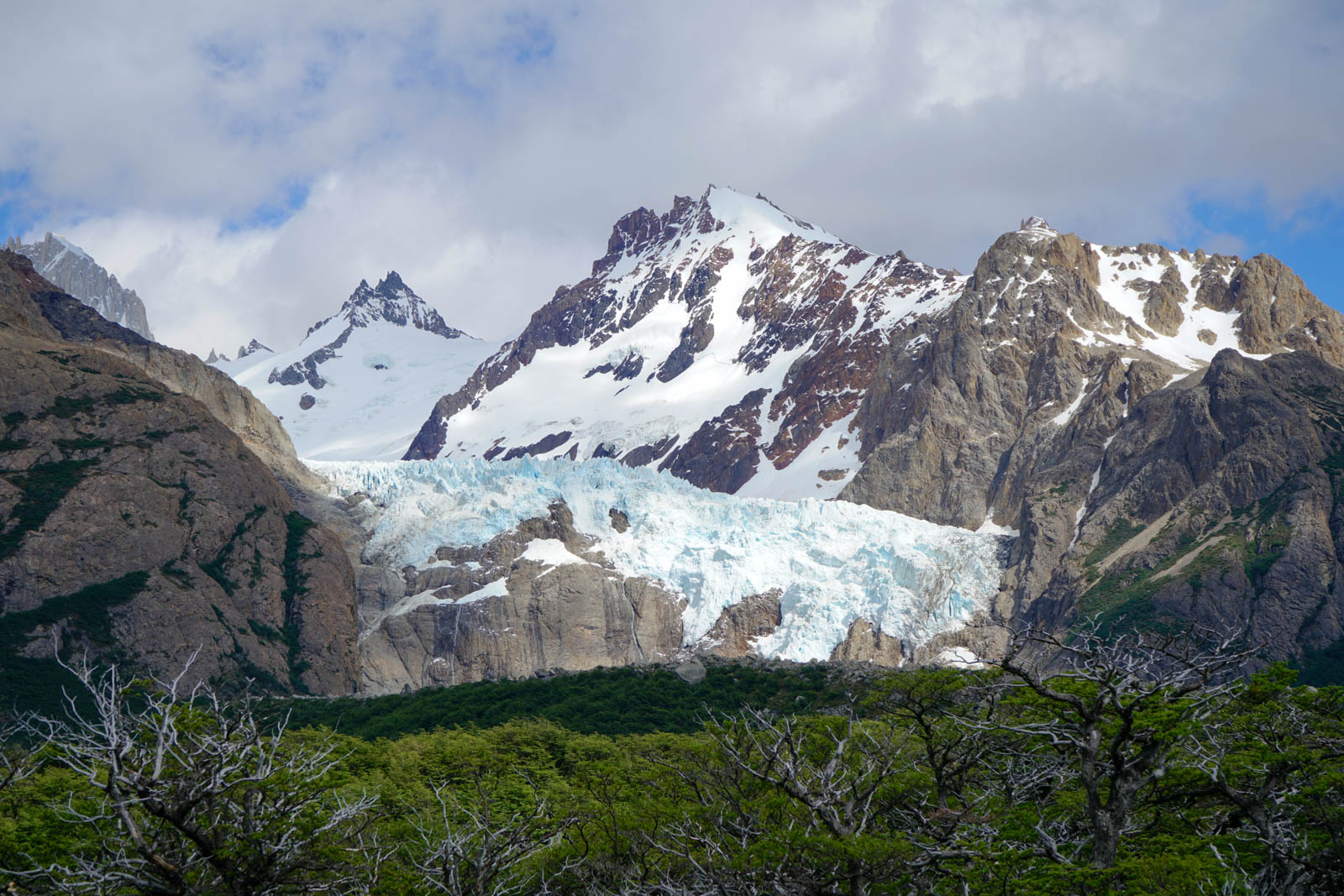 After about 4 miles, our trail met up with an even more popular trail, which brought us through a campground. Interestingly, the campgrounds along the trails are all free. If you hike with your gear to the designated campgrounds, you can stay there as long as you would like. These campgrounds are quite primitive with no campfires allowed (pretty typical in Patagonia, where the winds are insane) and very primitive toilets (holes in the ground), or if you prefer, a shovel and some woods. 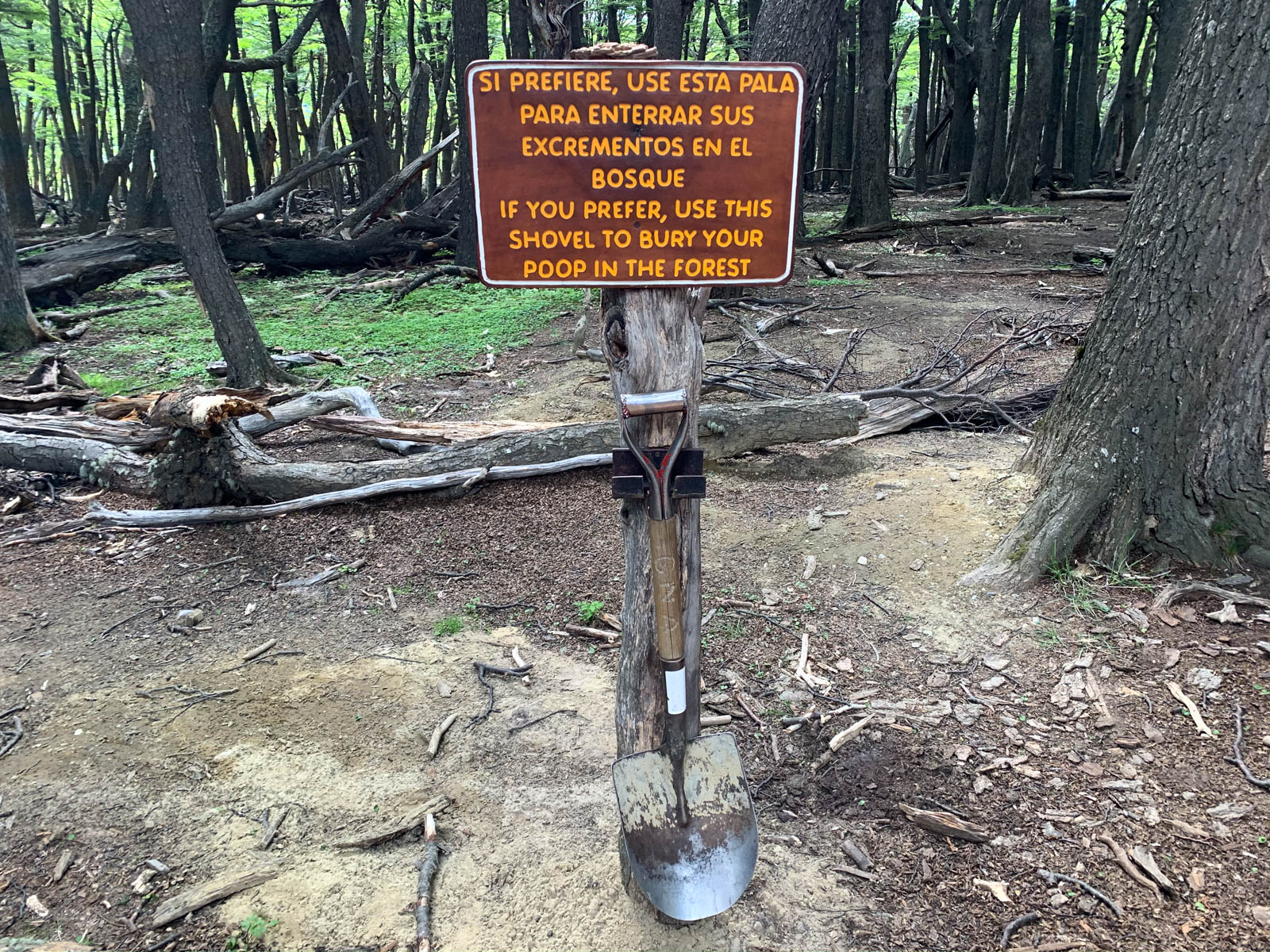 After taking advantage of these wonderful facilities, we headed more directly up the mountain. Our Airbnb host was not kidding about the steep steepness. It was exhausting, and we now appreciate the value of the trekking poles everyone else was carrying. While the rest of the trail was mostly on trails of dirt, the climb was all rocks and much of it was a combination of loose gravel and large boulders. We took many breaks on the way. 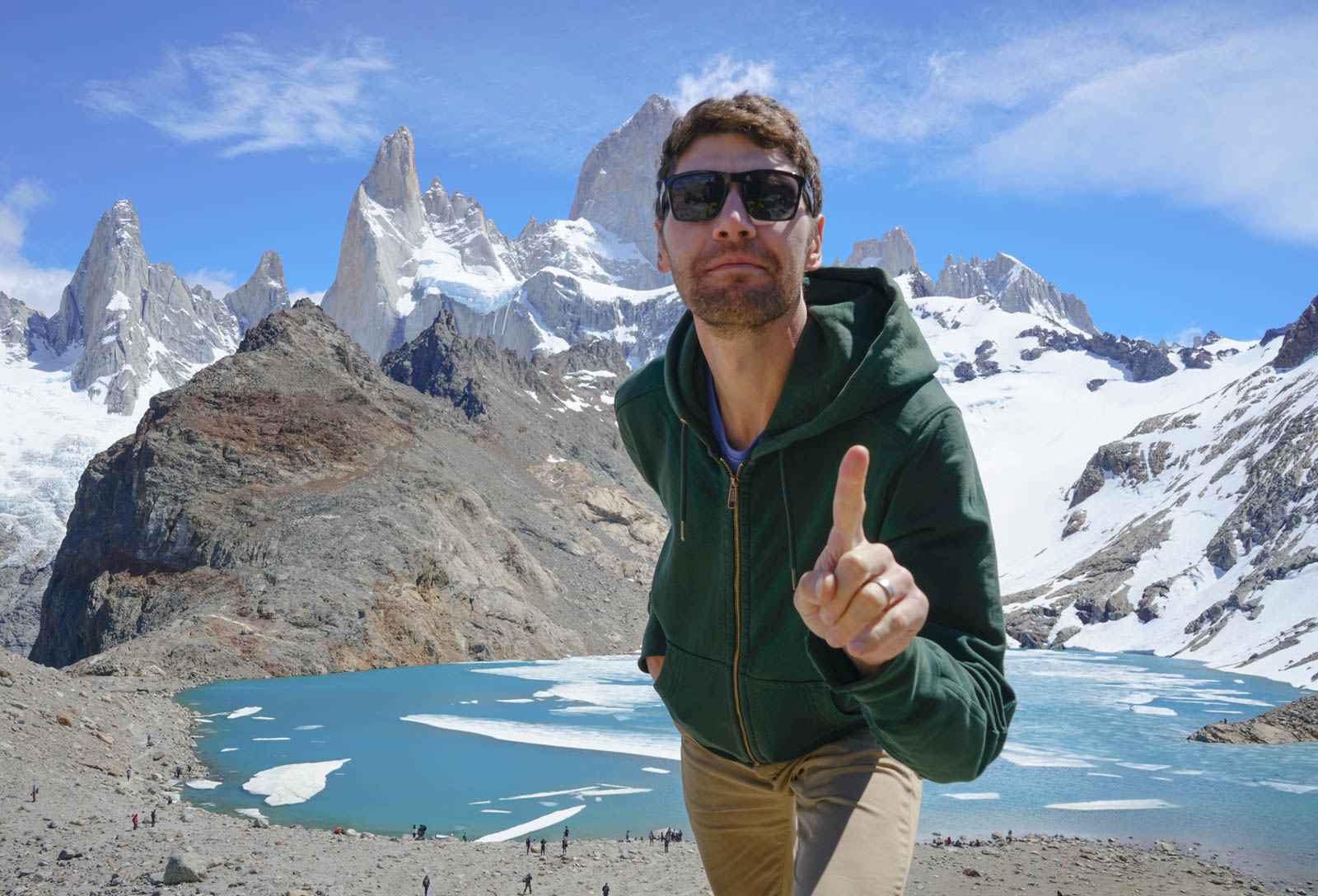 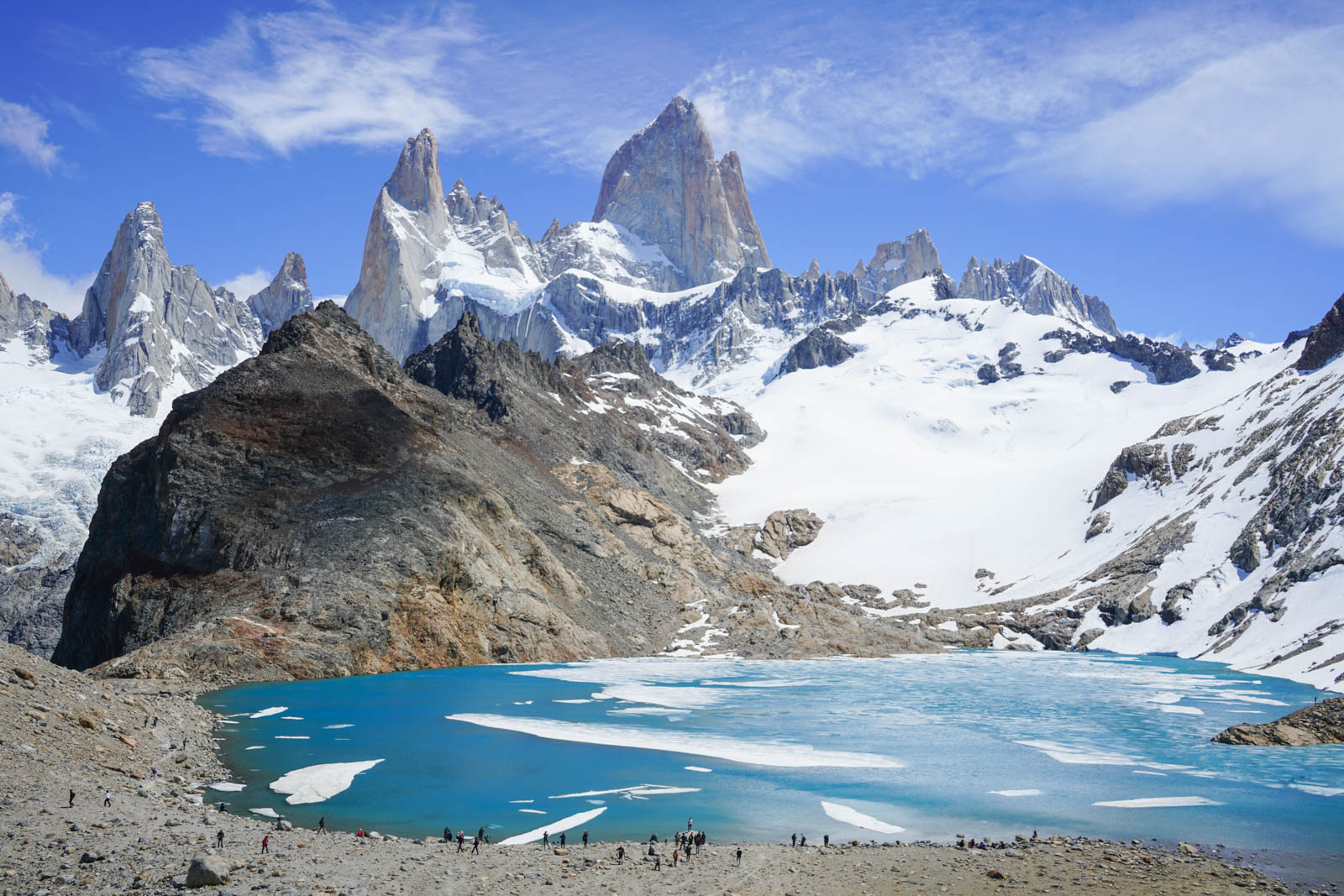 Unfortunately, what goes up must come down, and we had to descend the same “very steep steep” trail, which was equally difficult and painful, but in a completely different way. We had almost made it to the bottom when Tiffany took a small tumble. She was fine but then we still had 7 miles to go. For the first three miles we were still enjoying the views and the nice weather. But with four miles to go we were exhausted and not so happy about the remaining hike. We did take the opportunity to refill our water bottles from the glacial runoff, this part of Patagonia is one of the first places we have been where untreated, natural creek water is safe to drink. It was delightfully cold and our stomachs can confirm that it was safe to drink. Eventually we staggered into town, had some surprisingly good fries and a decent burger, and then headed back to the Airbnb where we stayed for the next 14 hours. All in, we logged over 17 miles and 36,000 steps on the day. 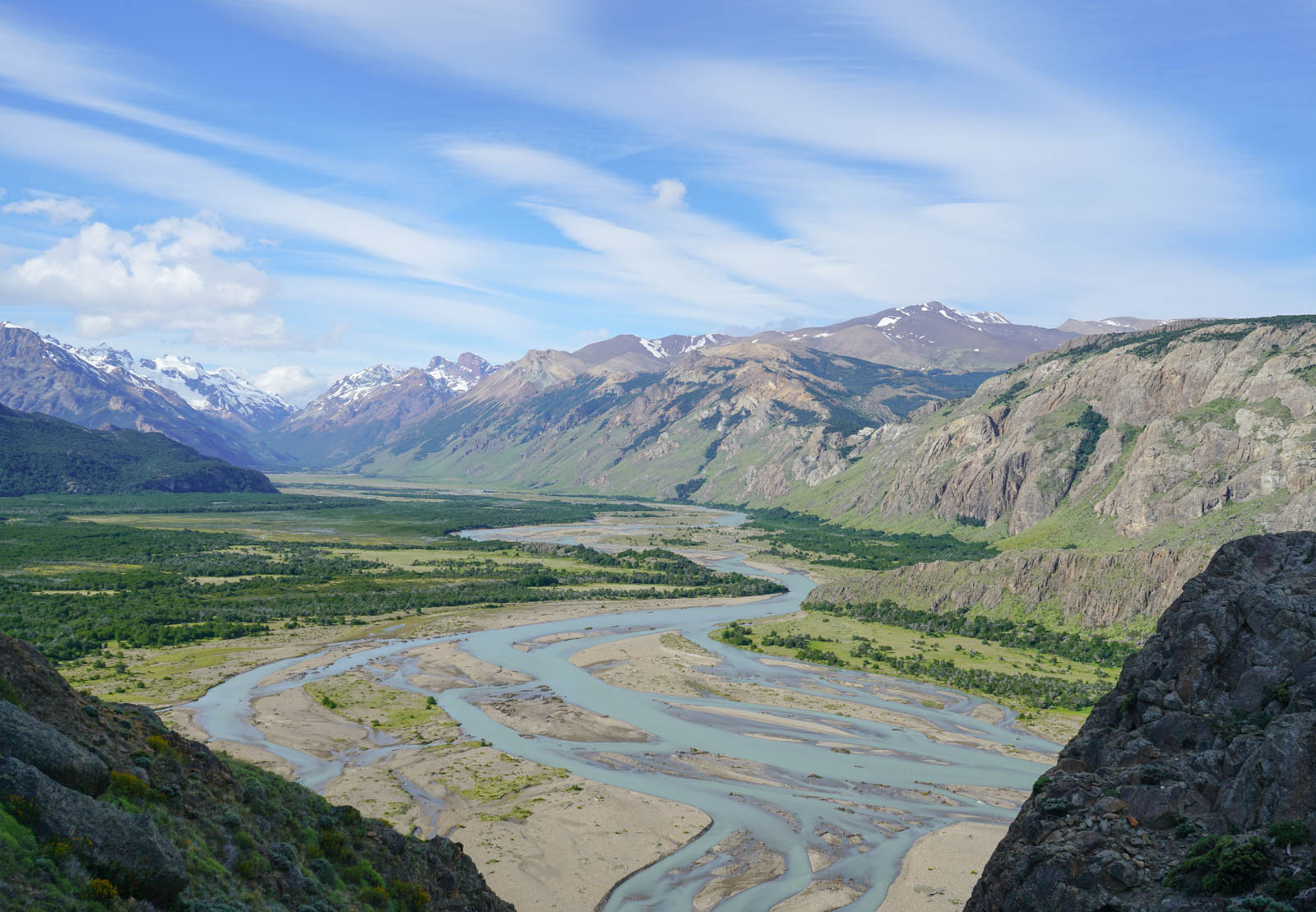 We still had one more day in El Chaltén, but wanted to take it easy so the next day we decided to go on an easy hike to a waterfall. Since it was an easy hike it did not have much elevation change but instead stuck to a trail close to a dirt road. The wind plus dirt kicked up by the passing cars and vans was not enjoyable. Also when we got to the waterfall since it was such an easy hike there were many people there who were on bus tours. We enjoyed the waterfall but especially enjoyed watching the wannabe influencers and their fascinating poses. 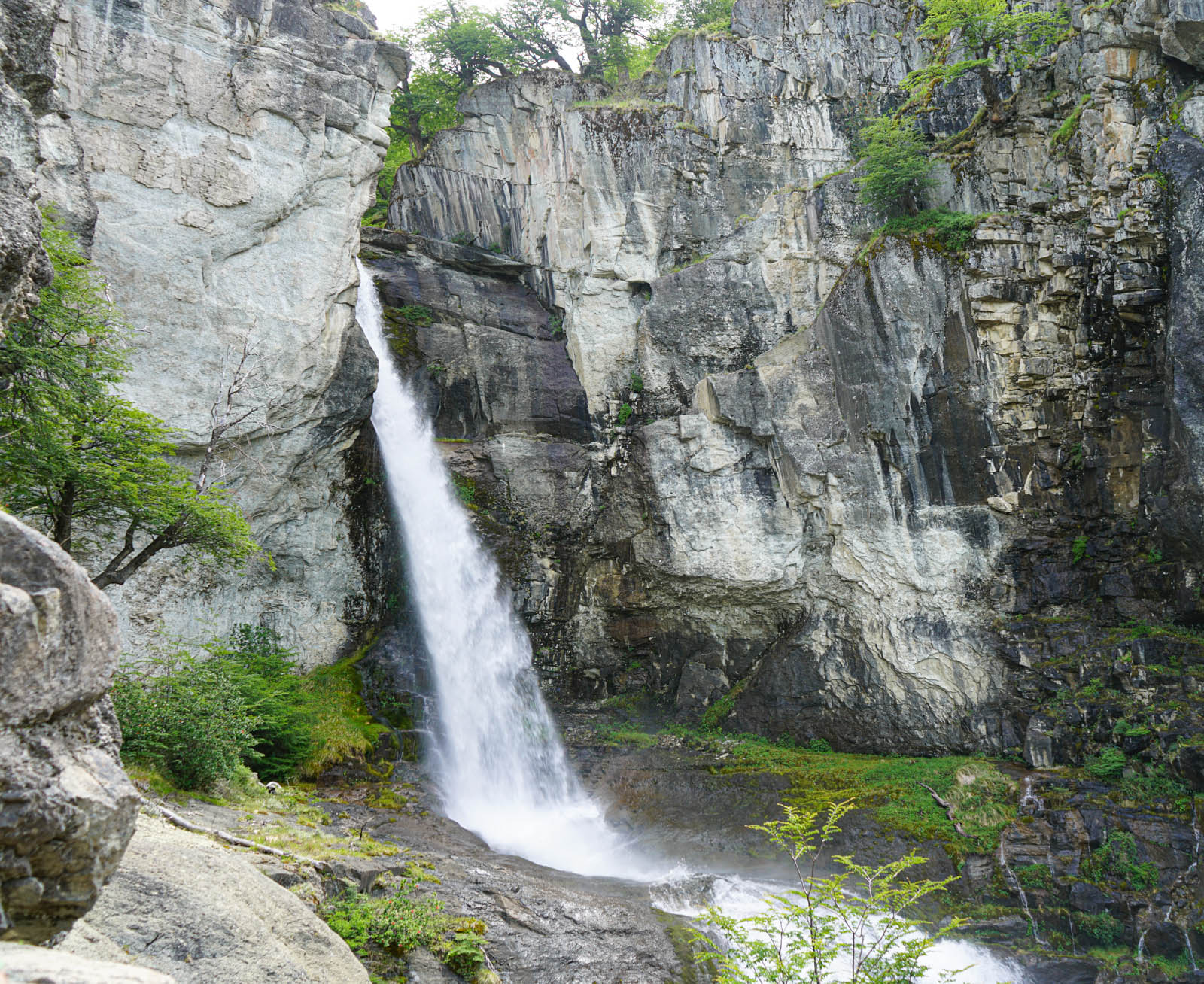 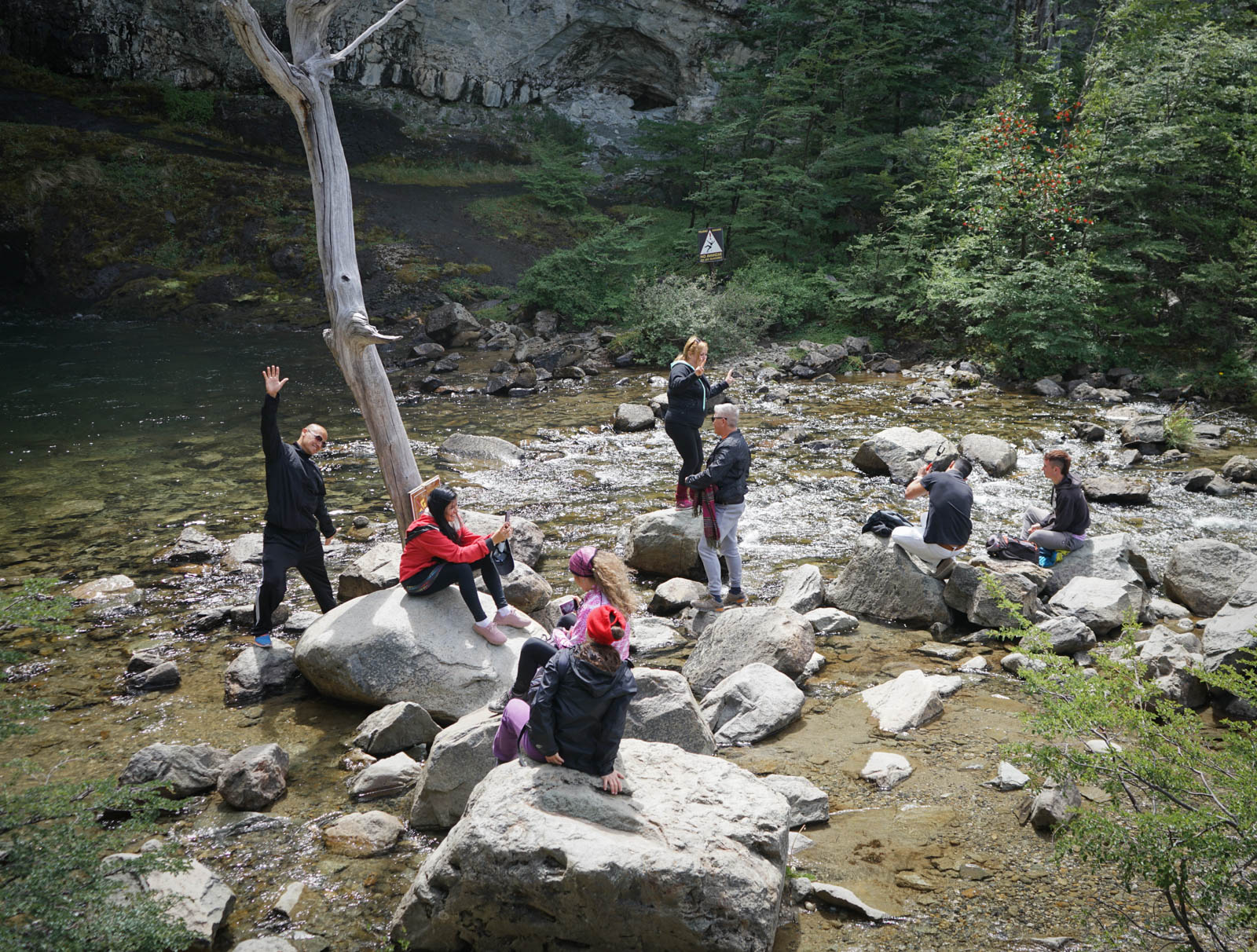 Our walk home came with some intense wind. Apparently the weather the previous day had been somewhat of an anomaly with clear skies and light wind. Rain and heavy wind was more typical and we were treated to that for the last portion of our stay in El Chaltén.

Still, despite all of the pain and moaning and groaning, El Chaltén was one of our favorite places we visited in South America. The slow (or at least as fast as your legs can take you) pace of life and communal appreciation of hiking and the outdoors is unique and almost idyllic. Let us know if you want to visit, we will happily return there one day.