Our visit to the largest waterfalls in the world, whatever that means

Initially when planning our trip we had not thought we would be able to make it up to the legendary Iguazu Falls - Argentina is surprisingly large and a bus from Buenos Aires to Iguazu takes 18 hours. We weren't sure if it would be worth that much effort. But once Tiffany's parents decided to join us we knew that they would enjoy the falls so much that we had to make a trip of it. We feel quite happy about that decision now.

Iguazu is at the border of Argentina, Brazil, and Paraguay. The way the border is drawn places most of the waterfalls on the Argentinian side of the river, meaning some of the best views of the falls in aggregate are from Brazil. So our trip to Iguazu Falls gave us an opportunity to visit Brazil for a few hours. The cheapest flights to Iguazu were on Christmas Eve, so on Christmas Day we made our way to the Brazilian national park around Iguazu Falls.

The Brazilian side basically consists of a single trail that walks along the edge of the river. There is also an area where you can get on speedboats that go under some of the waterfalls, but we decided against that potentially choppy ride, although since it was 90+ degrees when we visited, getting drenched in a waterfall didn't sound half bad. Basically all of the park's visitors walk along the trail which culminates in an amazing view at the section of the waterfalls called Devil's Throat.

Along the trail, we caught our first sight of the native coatis. The coatis are cute animals that are related to the raccoon, and on the Brazilian side we found them to be adorable. We even saw a few baby coatis that caused quite a bit of congestion on the trail. But in addition to cute wildlife there were the impressive and many waterfalls across the river. It was amazing to see so many waterfalls one after another. 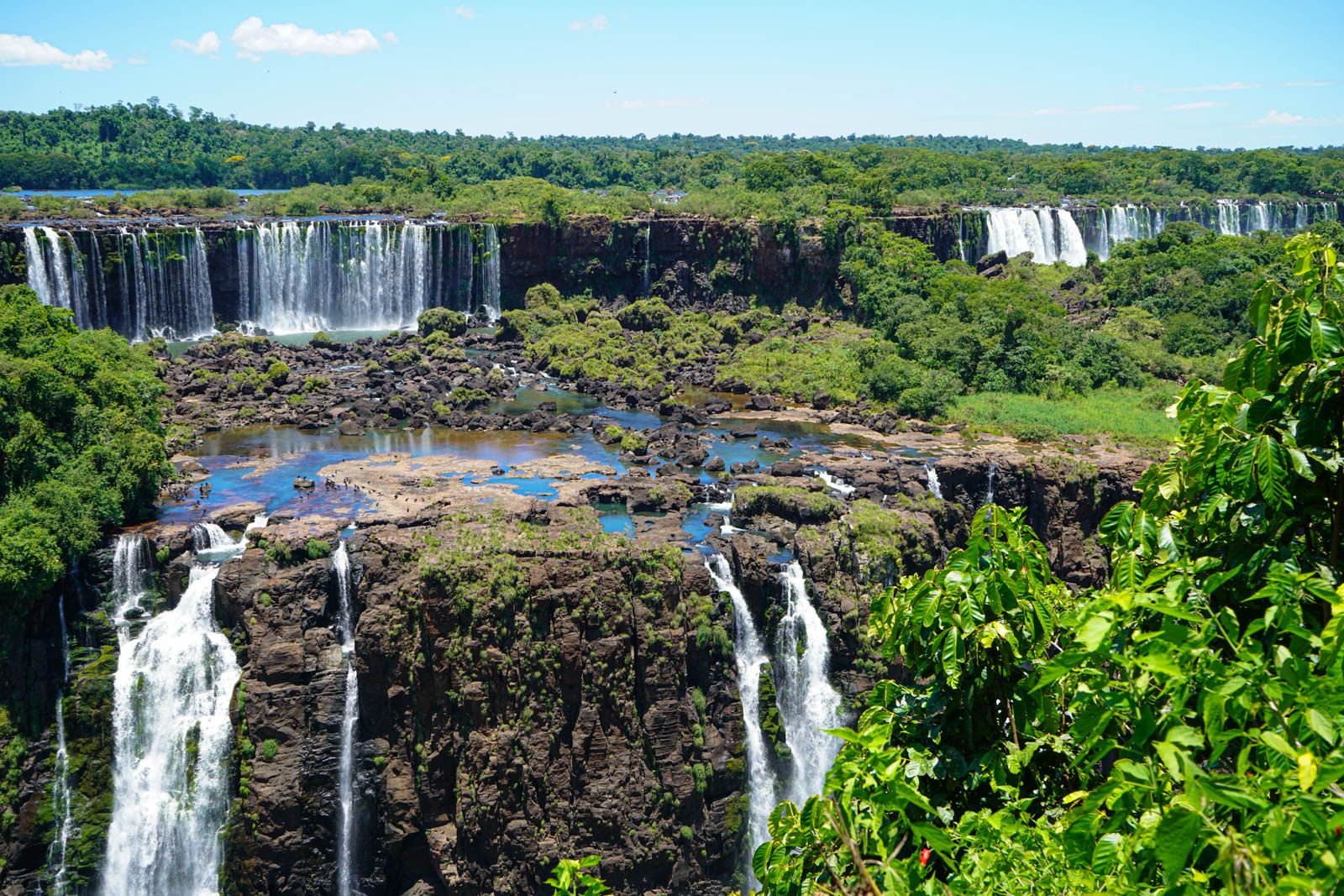 But the most astounding view was at Devil's Throat. The viewpoint allows you to walk over the water to stand almost amidst the falls, and the crowds are insane. But even the annoyance we felt being crowded by others clamoring for their perfect selfies could not ruin the awe and amazement we felt being surrounded by such natural power and beauty. The contrast of rainforest green with the blue sky and the powerful rushing water makes this waterfall by far more impressive than Niagara. 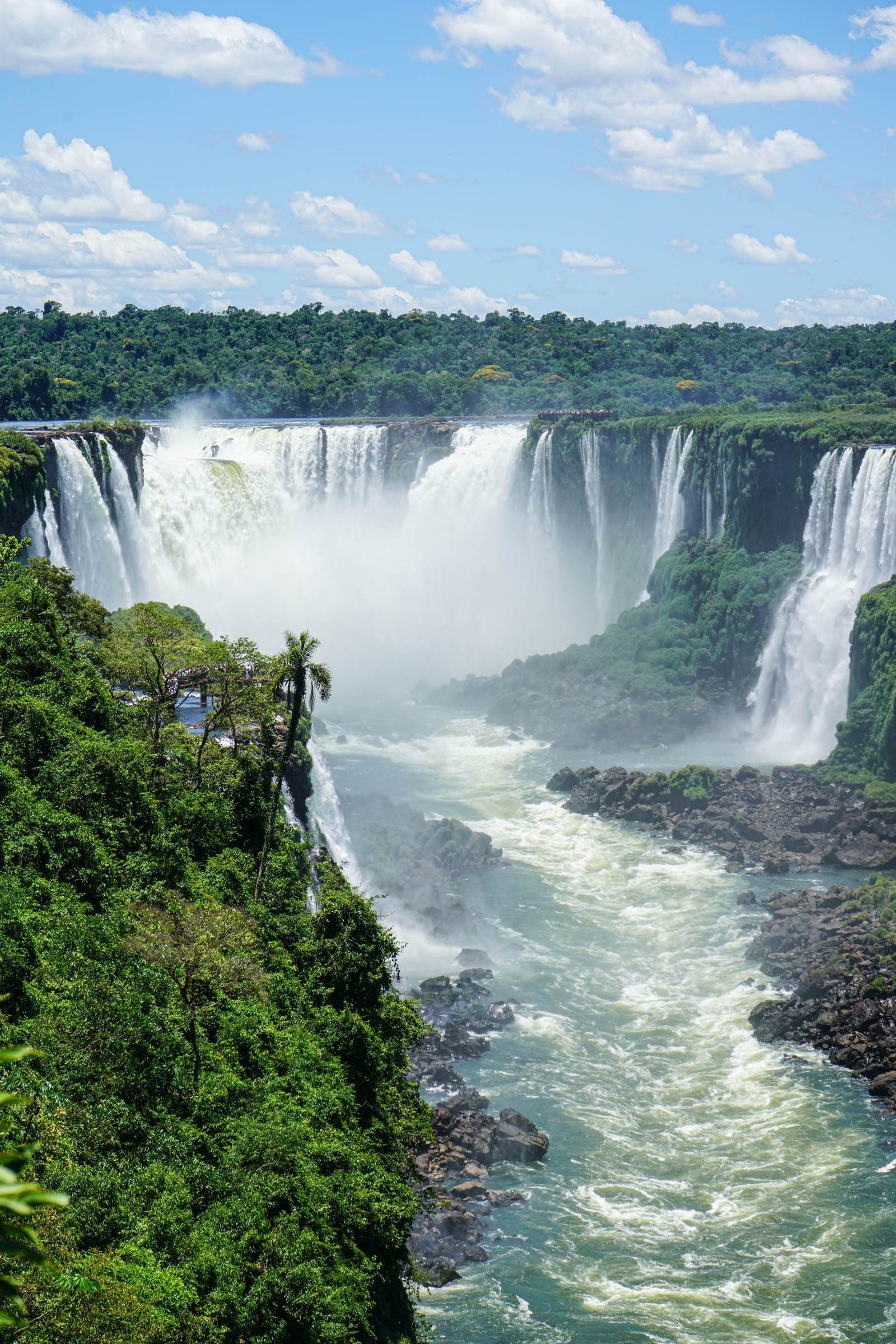 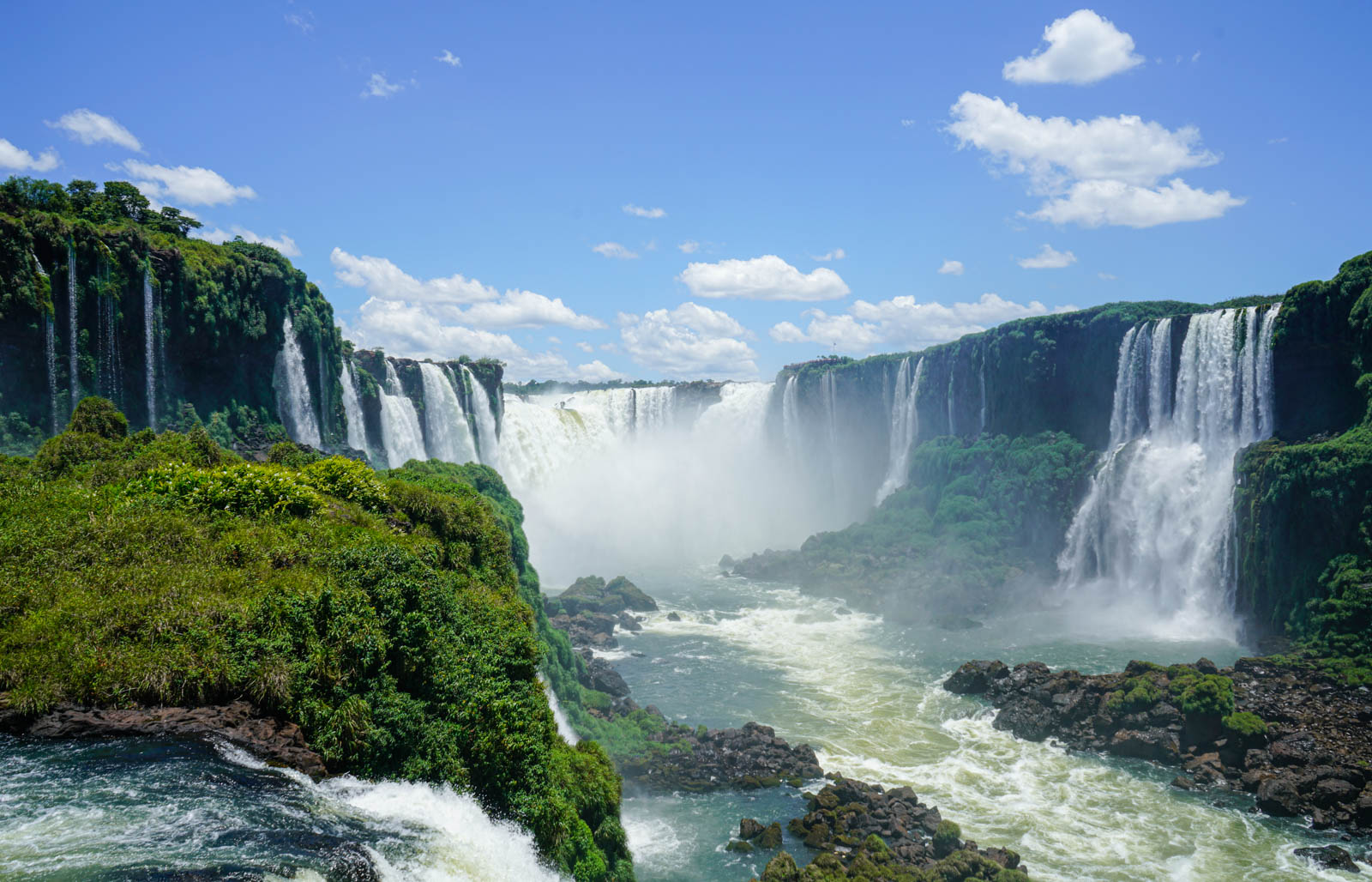 We started with the Devil's Throat trail, which is a long out-and-back trail to an overlook of Devil's Throat. The trail contains a series of bridges which cross the river's tributaries. Walking those bridges you really get a sense of the magnitude of the river and the work it has done over millions of years. Tiffany's parents enjoyed looking in the river and seeing these tiny fish that are also native to Taiwan. This long trail also provided an opportunity to see some beautiful tropical birds. 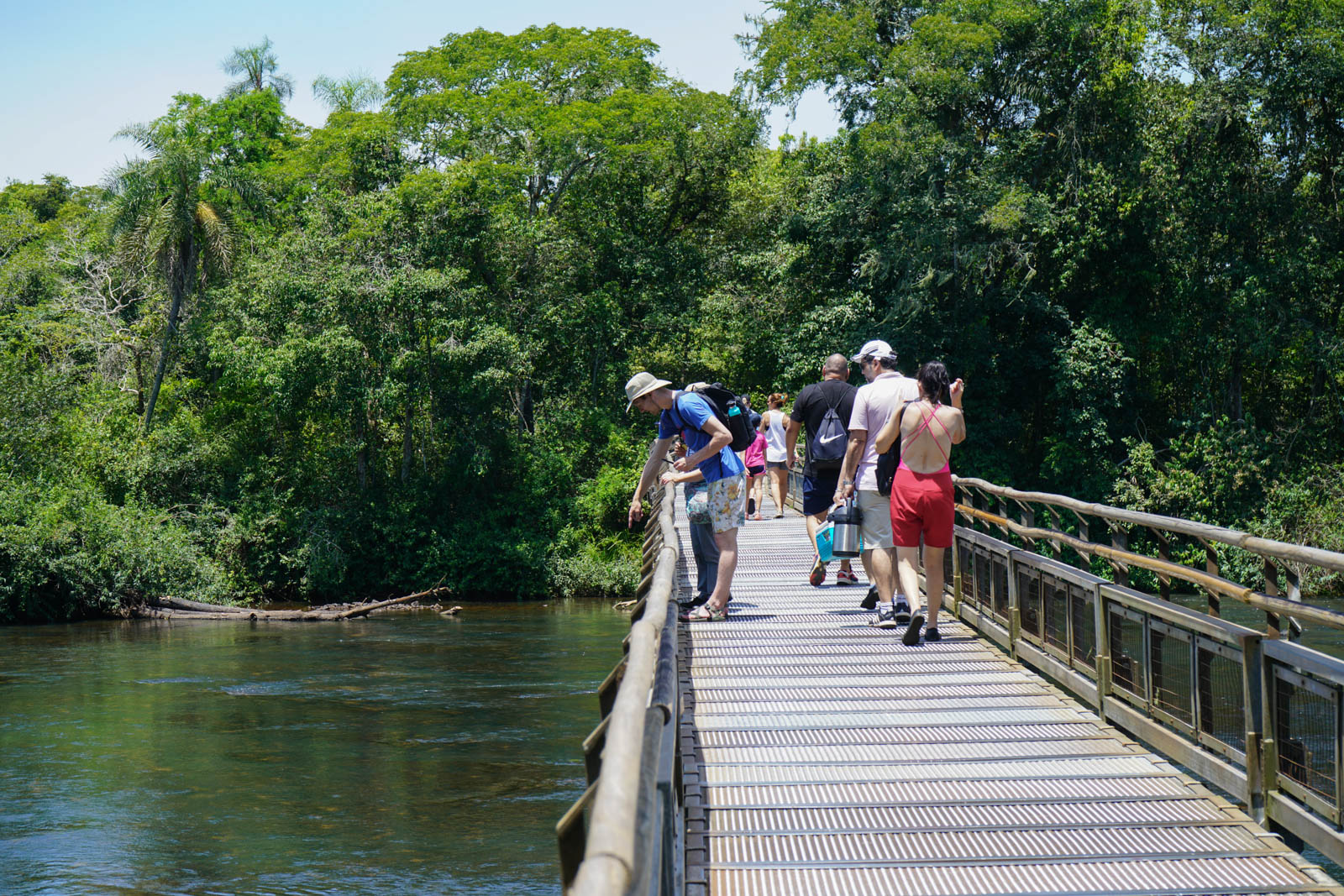 Eventually after a bit of walking you start to hear the roar and see the rising mist of the waterfall and soon enough the trail basically deposits you into the waterfall. Once again it was a very hot day -- a high of 96 -- but this time we got to stand in the intense mist of the waterfall. It was quite refreshing, very crowded, but once again incredibly awe-inspiring to see the water rushing over the cliff.

Next we walked back to the train and stopped for lunch before heading on the two other trails. During lunch, we saw the true nature of the coatis. The raccoon-like creatures are not at all afraid of humans. In fact, they love humans, particularly for their carelessness with food and proneness to distraction. These opportunistic creatures will snatch a bag of chips away from unsuspecting people and have a lovely snack. We even saw a couple of coatis try to get into people's backpacks looking for food. We kept our distance and ate our lunch in, what amounts to, a cage.

The two other trails led us to views of many waterfalls and a feeling like we were in an Indiana Jones movie. We also saw more scary scavenging coatis and our first monkeys of our trip! We even saw a tiny baby monkey, which was pretty adorable. But we also saw how other cultures have no qualms about interacting with wildlife... perhaps we will be able to flesh out our feelings about that at a later date. 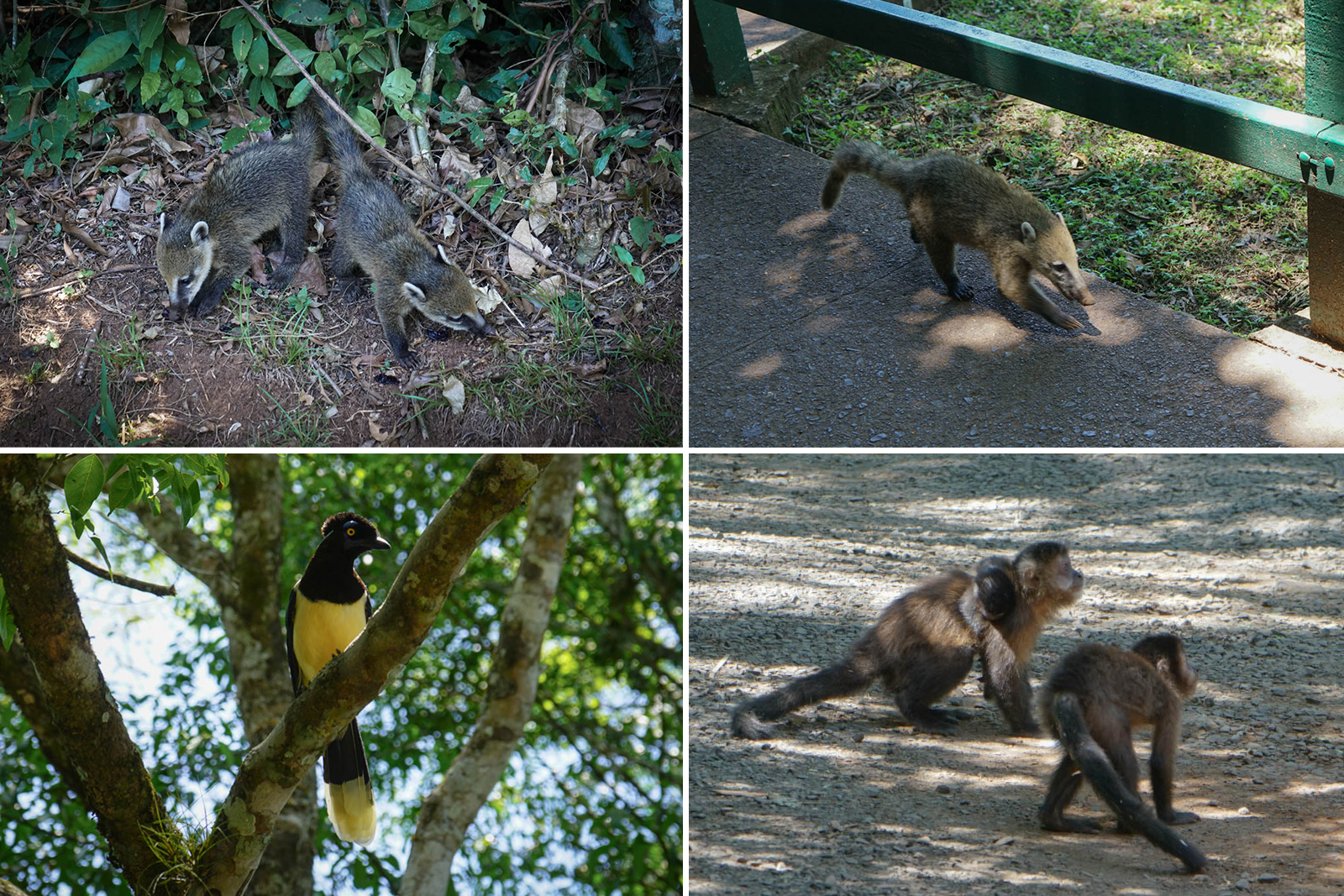 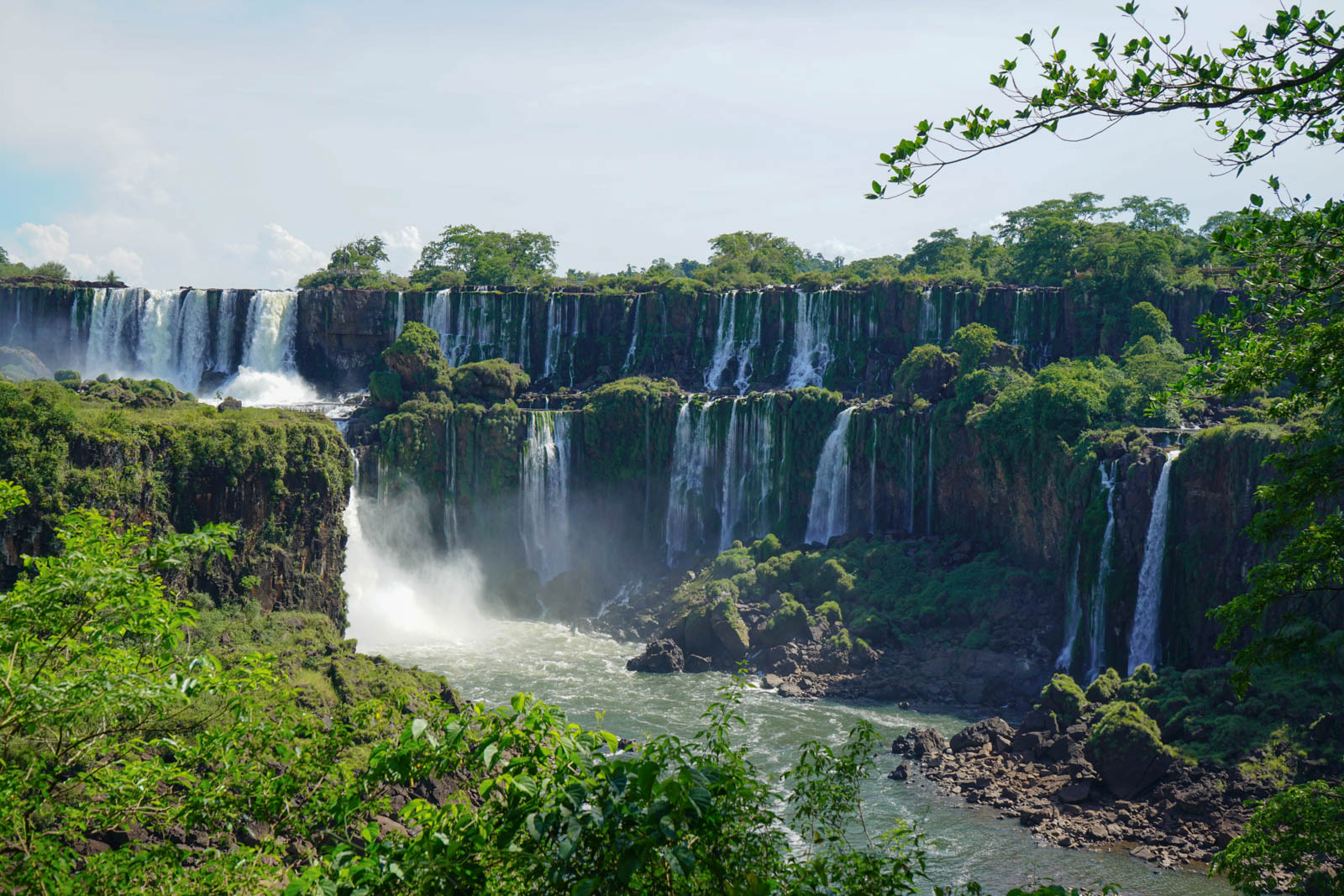 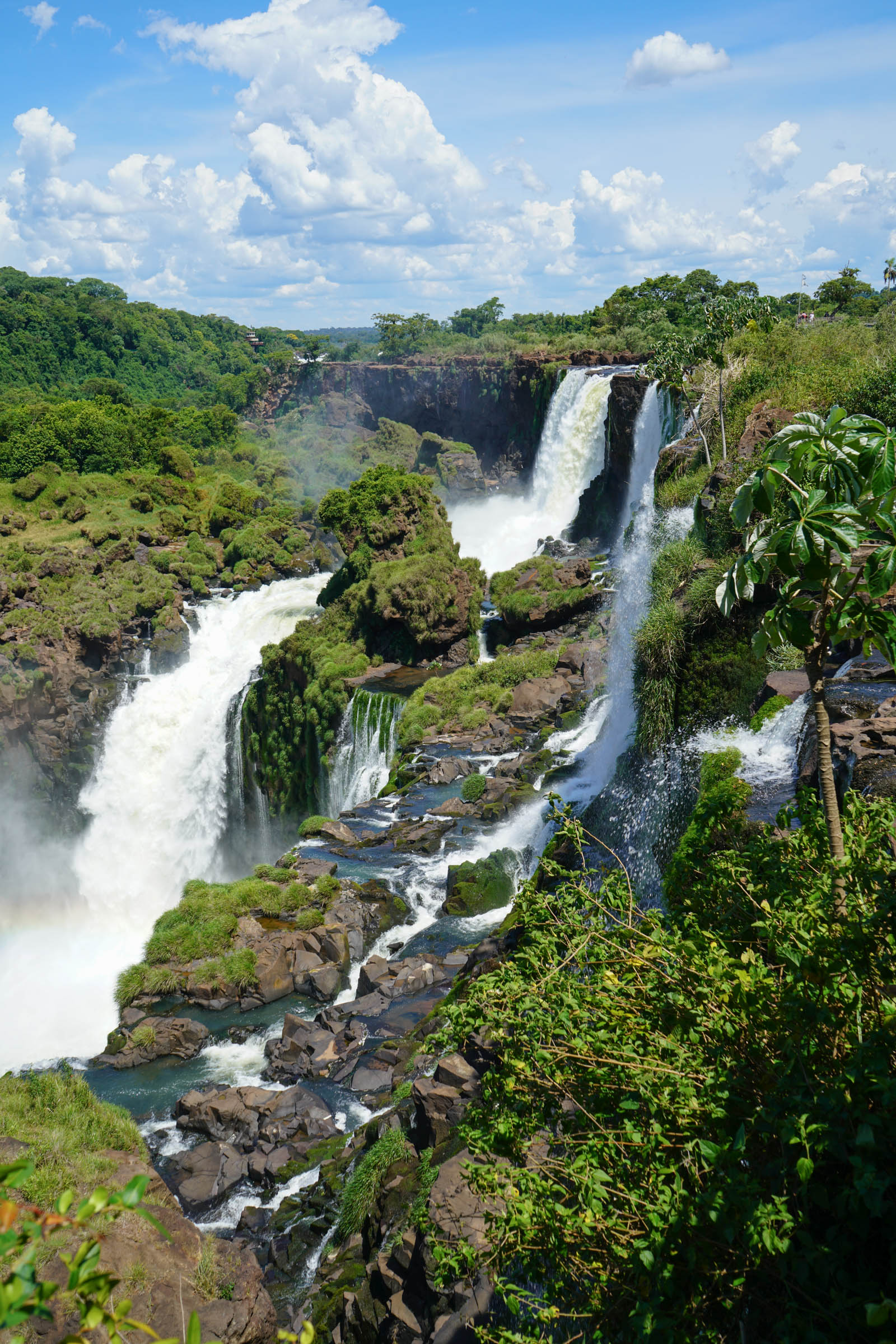 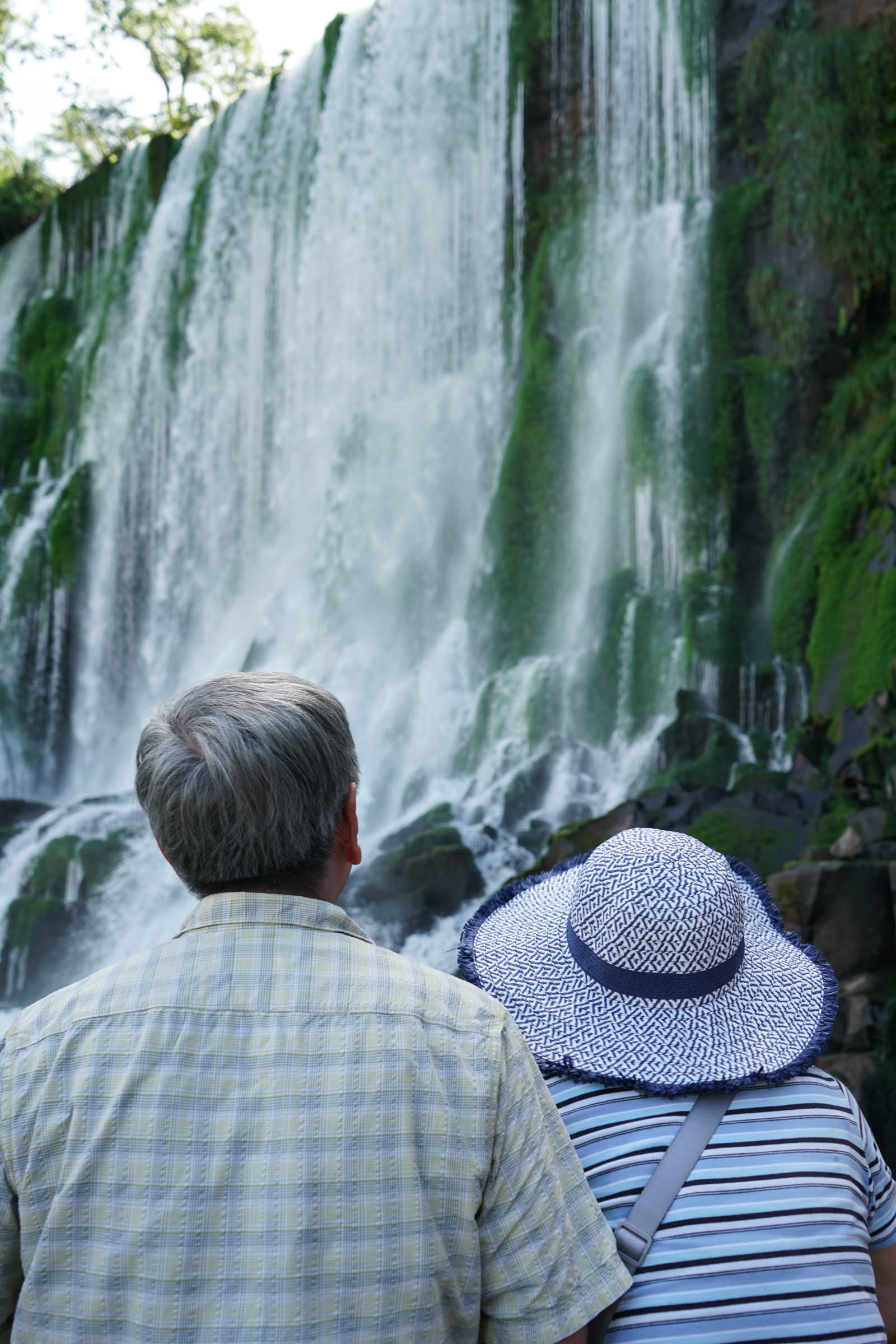 And thus ended our short trip to the world's largest waterfalls.

Our trip back to Buenos Aires took us four to five hours longer than planned, which resulted in us arriving at our Airbnb at 3:45 am, so the trip was not quite as short as we had planned. But while in the airport, we killed time by watching half of Michael Bay's 6 Underground, which was so awful we had to stop, and by watching a nearby couple canoodle, which was so awful we couldn't stop watching.

Regardless, it was an amazing trip to a natural wonder of the world and we are glad to have shared it with Tiffany's parents.