That Time We Saw Tigers

We loved our Kenyan safari so much that we decided to take a chance on a jungle safari in India in order to try to see wild tigers.

There are many reasons not to do a tiger safari, mostly that it's quite rare to see tigers in the wild, it's really expensive to do, and getting to the parks requires a fair amount of effort. But we felt this was a once-in-a-lifetime opportunity. It's not going to get easier to see wild tigers in the future.

The process of finding and booking a tiger safari in India is quite difficult. First, there are many tiger reserves and national parks but very few tigers. There are also many tourists clamoring to see a wild tiger and very few tigers. And as with many similar activities in India, the internet doesn’t offer much help, with the official websites offering incomplete information and dead-end contact forms, and third-party sites going heavy on marketing.

The Indian government runs the jungle safari business, including operating resorts inside the national parks. And they leverage this business for all it's worth -- they limit the number of vehicles that can enter the parks every day, they charge top of the market to stay at their resorts, they guarantee their resort guests spots in the safaris along with better vehicles (think a 4-person Jeep vs. an 18-seat bus), and they charge a premium to go on safari if you're not a guest at their resorts. It's smart business.

The government-run Jungle Lodge and Resort at Nagarhole was completely full, so we booked a room at The Serai, a luxury resort just outside the park along the Kabini River. The Serai has a deal with the government to basically guarantee their guests spots in a morning and evening safari. This came at quite a premium. But having navigated the government's website in attempt to book safaris directly with the parks service, it was a relief to delegate safari booking to the hotel staff. And totally worth it to have two chances to see a tiger in the wild, even if the chances were remote.

Since it was so expensive we decided to just book one night which meant a lower chance of seeing tigers but a higher chance of having money at the end of our trip. Plus although we absolutely loved our Kenyan safari experience and had high expectations for the safari, we had quite low expectations for actually seeing a tiger.

To begin our tiger safari adventure we hired a driver from Mysore to drive us the 2 hours to the lodge and national park. The Karnataka countryside is beautiful, with endless rice fields, banana trees, and bustling villages, and the peaks of the Western Ghats in the distance. The drive itself consisted of lots of honking and narrow passing by our driver -- standard for Indian road travel, even when there isn't a ton of traffic around. Indian drivers all seem to be engaged in a perpetual mass road race where you gain and lose points based on how many other drivers you pass.

To get to the resort, you have to pass briefly through the National Park, to a tiny village, Kabini, which has about an equivalent number of locals and resorts. As we approached, we entered a large guarded iron gate, which our driver explained closes the road to through traffic during the night, to protect villagers from predatory big cats. We perked up a bit -- there’s a serious enough problem with big cats in the area that they have to close the roads at night. But we still tried to keep our expectations low, as everyone says big cat sightings are terribly rare.

The lodge itself was quite nice, easily our nicest stay in India. A variety of snacks in our room, including an assortment of chocolates, was a welcome touch. Besides safaris, the resort had many activities on offer, including basketball, cricket, croquet, and bikes for rent. However, the temperature was above 90 degrees fahrenheit, so we mostly stayed inside our room under the air conditioning while waiting to go on safari.

First up, we took an afternoon boat safari along the Kabini River, which borders three national parks. The boat safari was packed with Australian retirees, a young Indian couple with a 2 year old, and us. Upon boarding we were given the largest life vests in the world and instructed to put them on. It was quite a look. 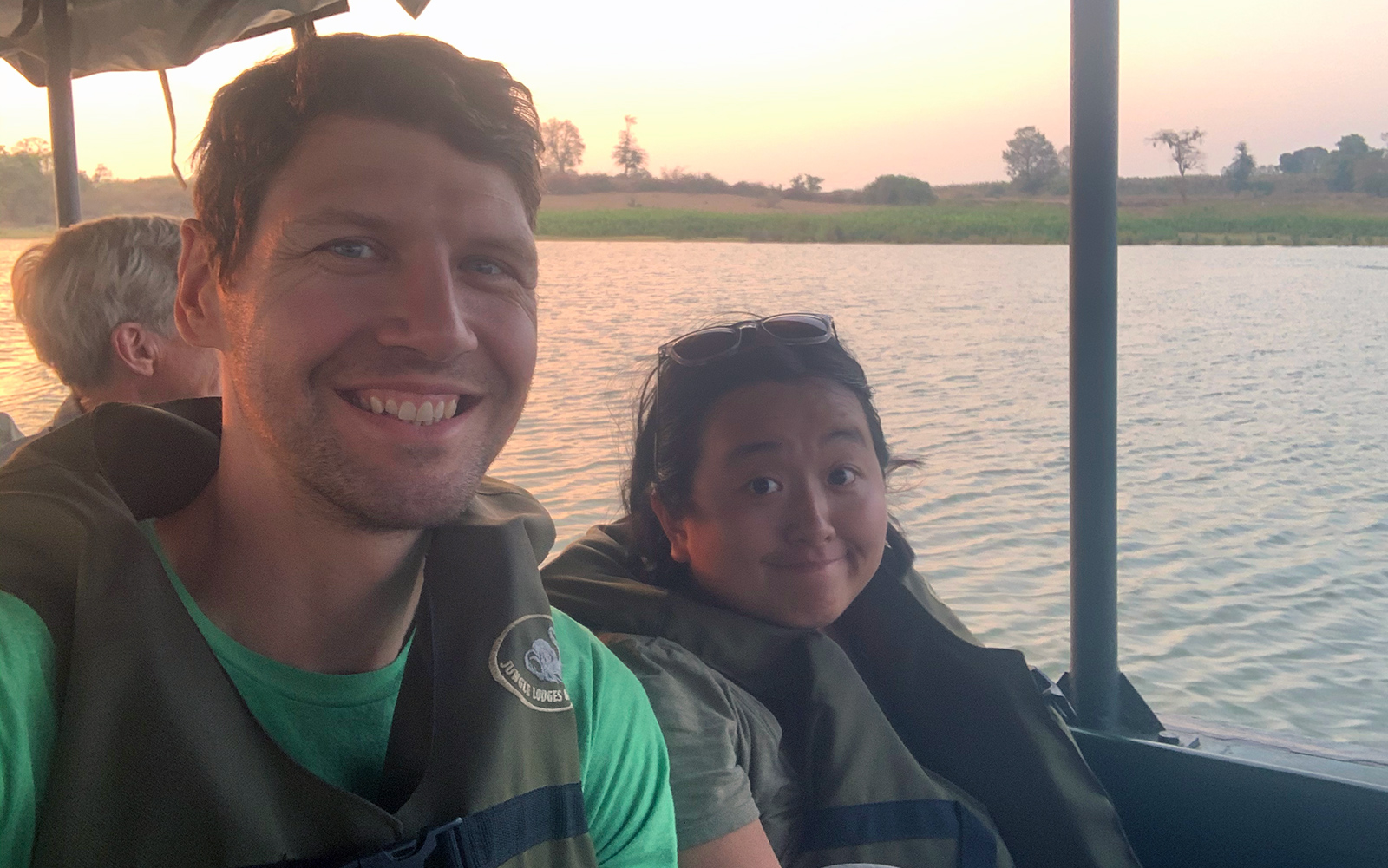 We motored along the river looking for wildlife on the shore. We managed to see a herd of Asian elephants chasing off a bunch of wild pigs and heard our first elephant trumpet. We also saw a few crocodiles, deer, and lots of birds. But mostly we cruised back and forth around a spot with some panicked monkey and deer activity, where our guides said tigers were supposed to be. But we saw no tigers. 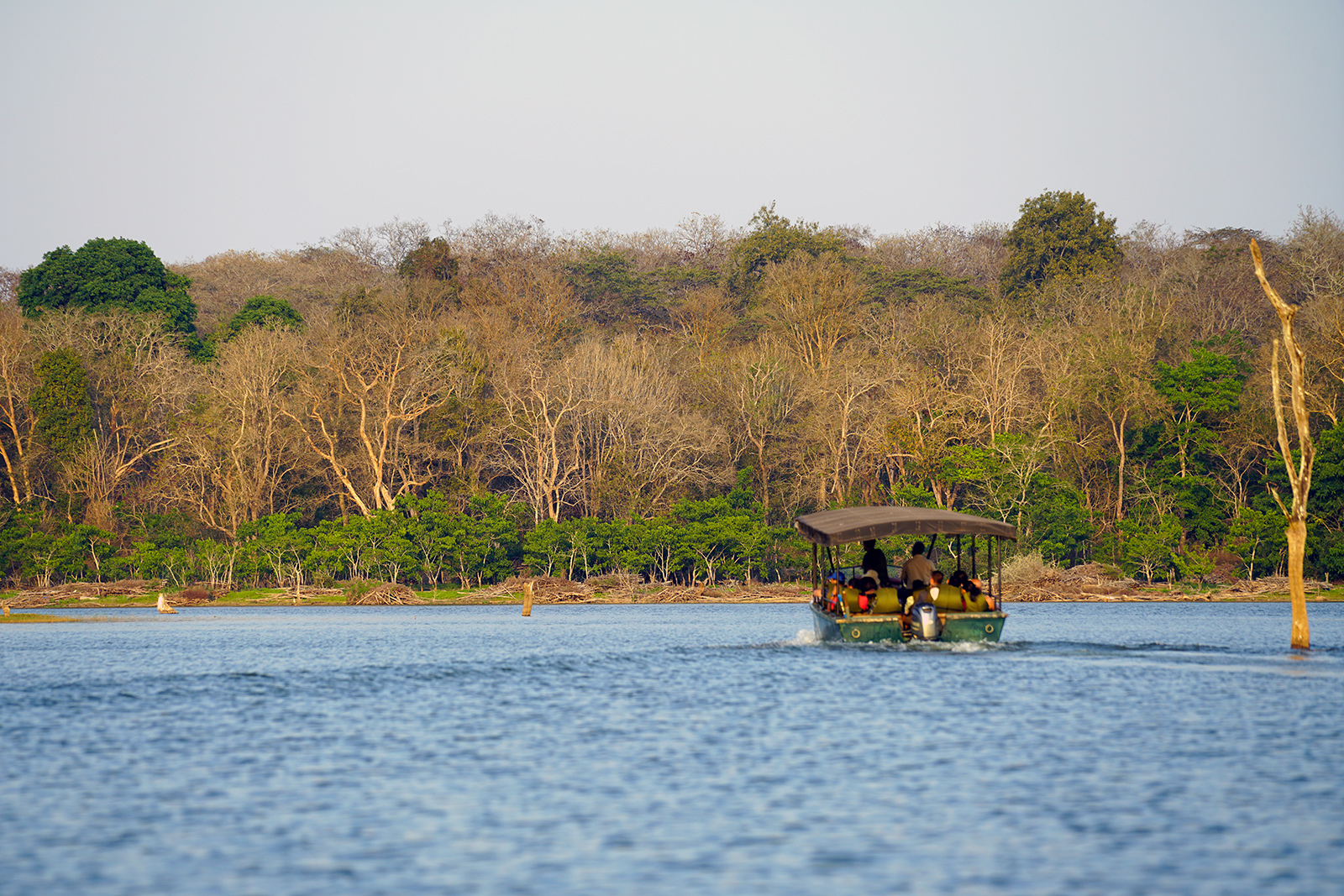 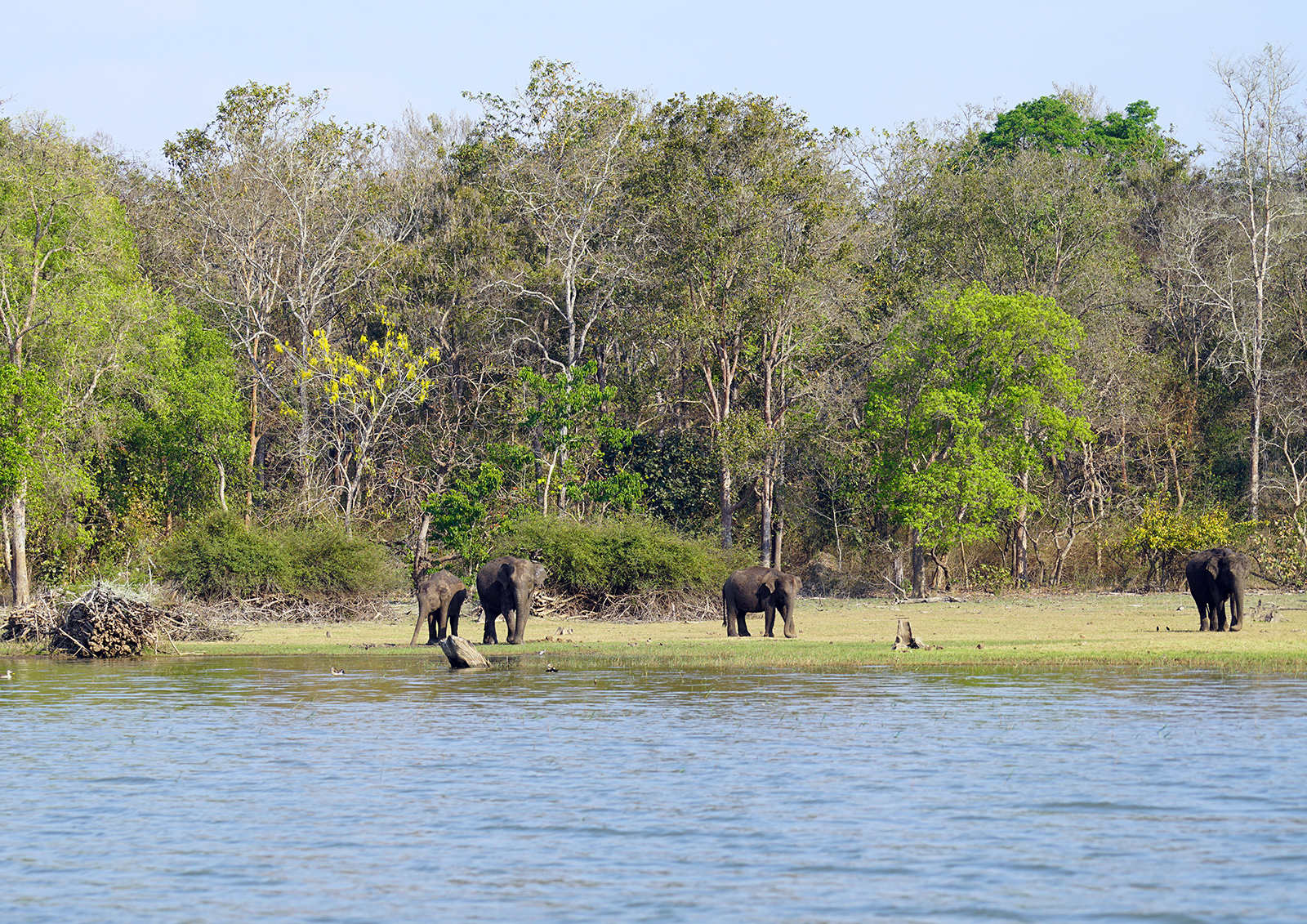 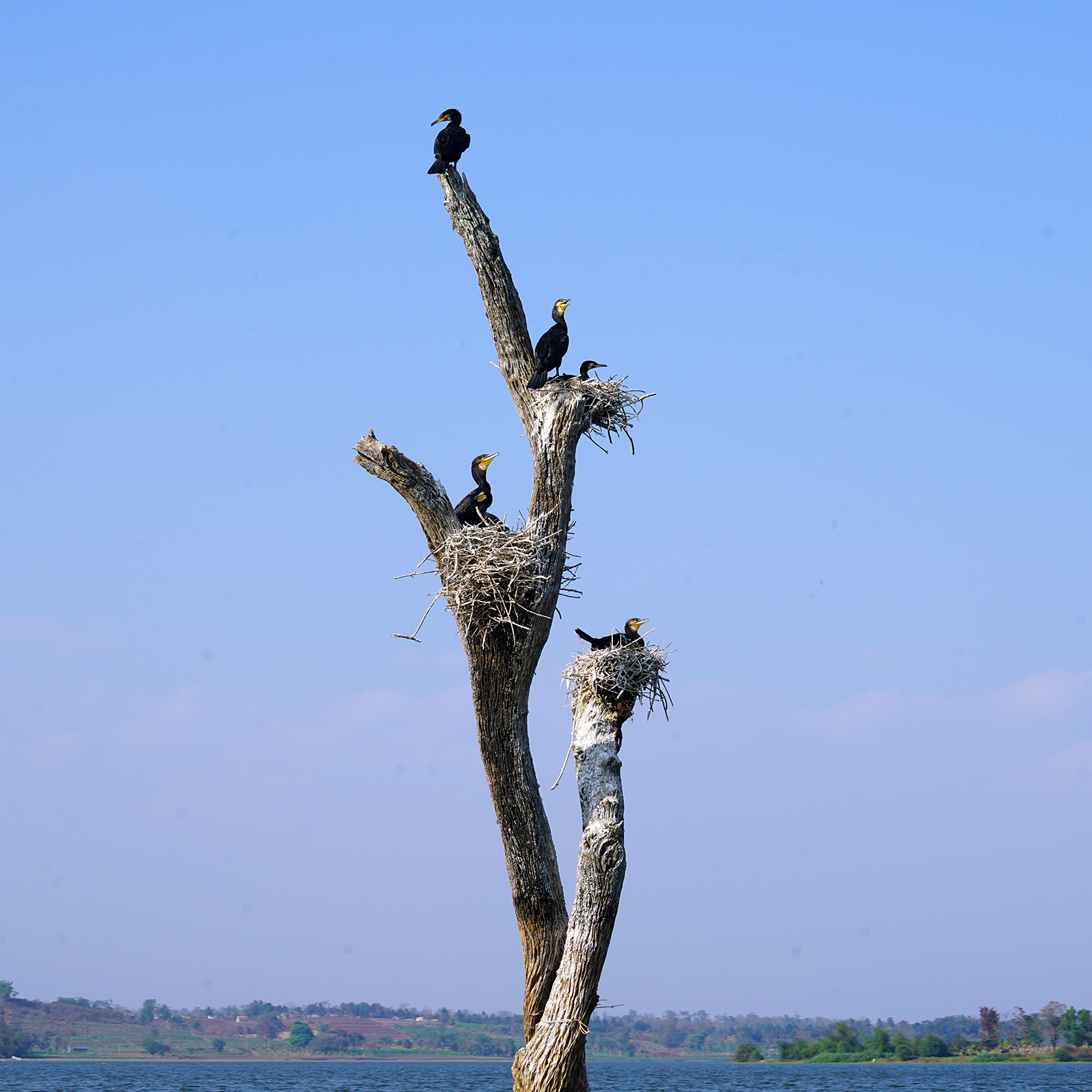 Overall, the boat safari was… underwhelming. Having seen most of these same animals up close in Kenya, glimpsing them from afar wasn’t terribly exciting. The guides on this boat safari didn’t offer a lot of information about the animals or the area, so we mostly rode around in silence or listened to insights offered by the Australian retirees.

We returned to the resort, had a mediocre dinner, and then got to bed early, as we were scheduled to depart at 6am for our morning jeep safari.

The next morning, we woke up super early and hit the road before dawn. We ended up in a 6-seater jeep, shared a couple from Tampa and a couple from who-knows-where who sat at the back (we generally aren’t very outgoing with fellow travelers, let alone at 6am).

From 6:30-9:00am we drove around the tiger reserve, passing the occasional deer or peacock. Again, the driver didn’t offer a lot of insight about the animals or the park, instead focusing his efforts on tracking the tigers. Several times he would get a report of tiger activity, and we would race across the bumpy terrain only to find we’d missed the tigers. Things were looking grim for a tiger sighting, and we both resigned ourselves to the fact it wasn’t going to happen.

Around 9:00am, our driver took another call with HQ, and then turned to us and said we would try one more time to see tigers. He warned us he would have to drive fast, so we held on tight as he raced back to a place we had passed at least three times.

The jeep slowed as we approached another parked smack in the middle of the road.

We could see movement in the woods, just off the side of the road. A tiger, pacing. 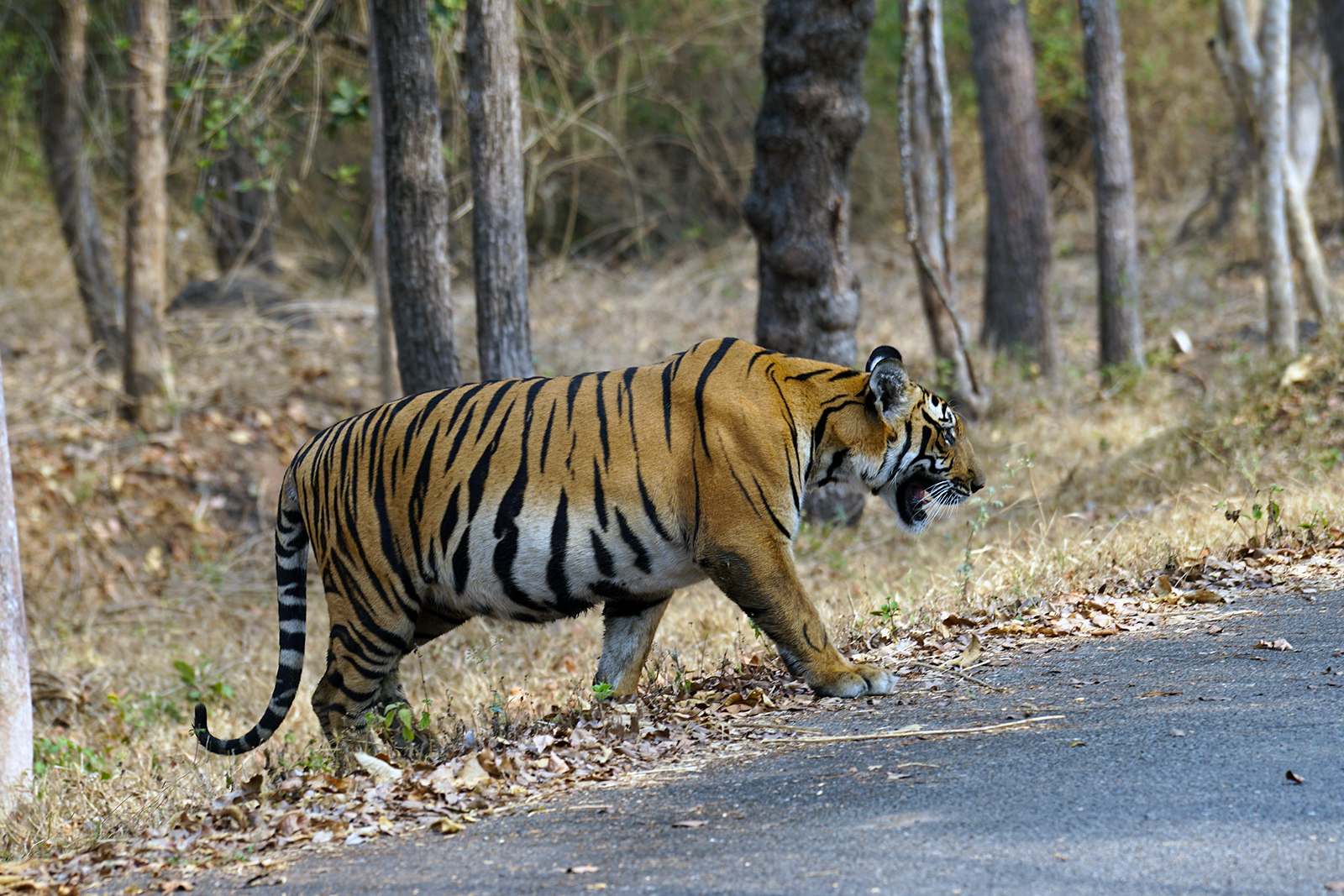 Then we spotted another tiger chilling beneath a tree. And then another lurking in the bush. A total of three tigers. 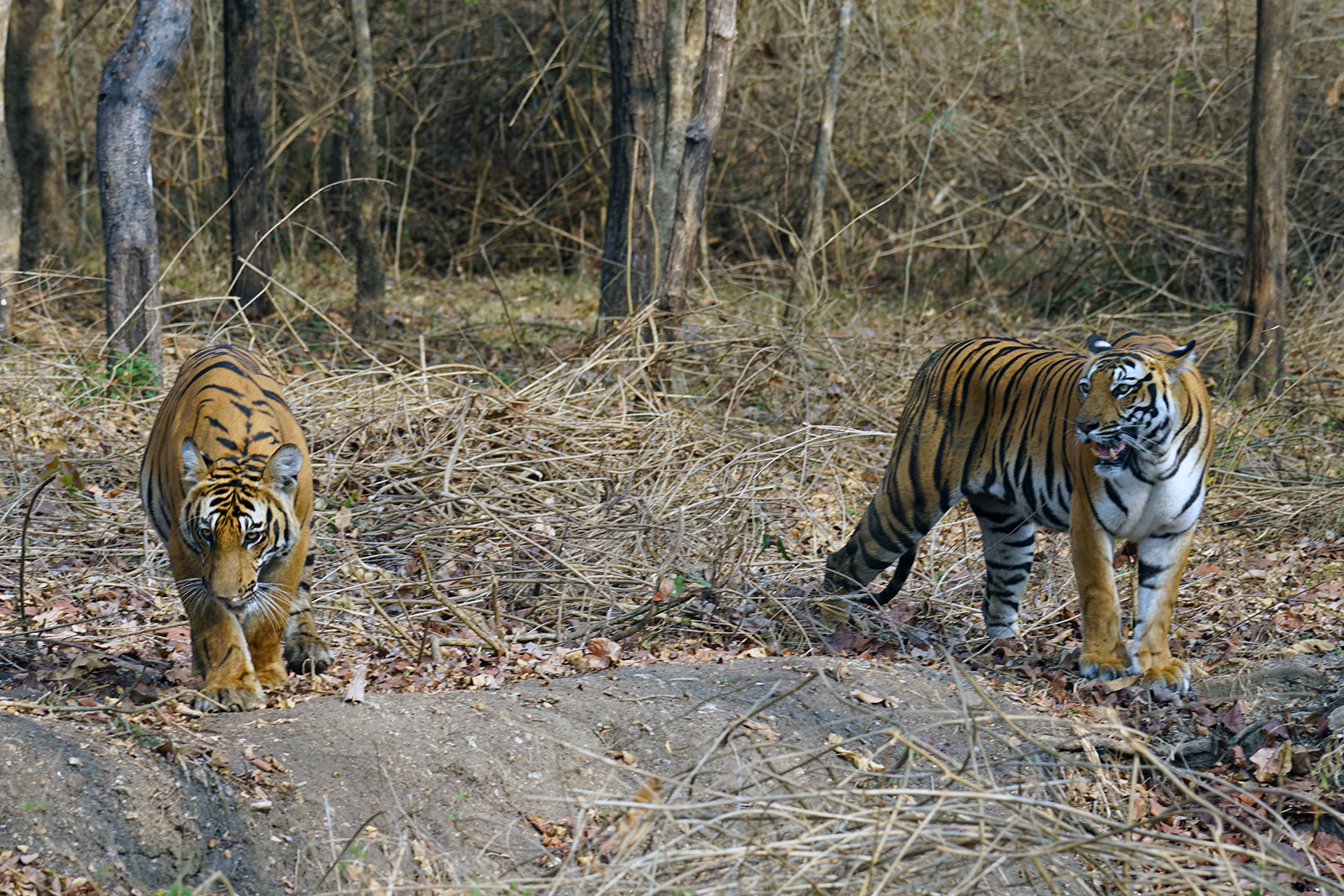 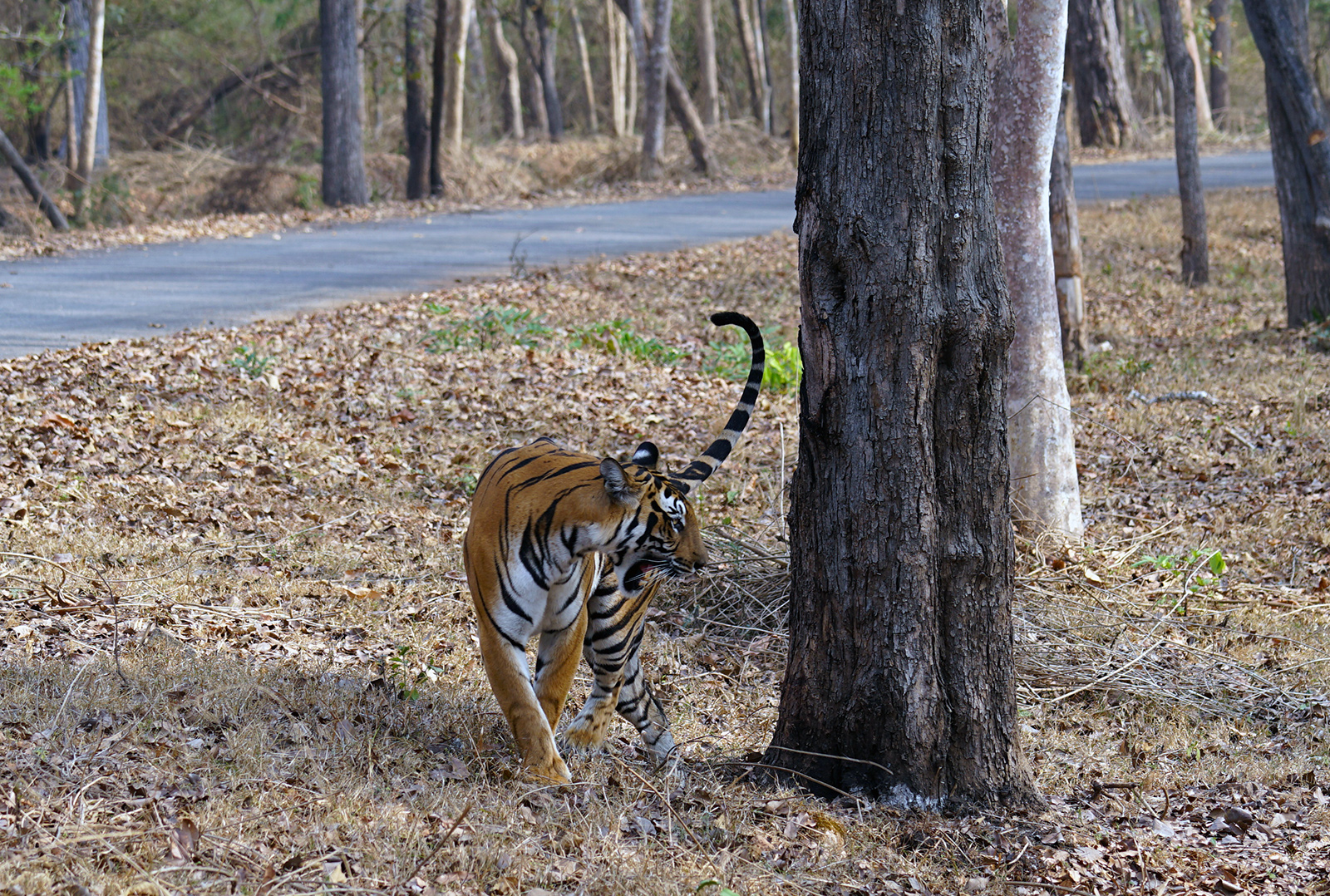 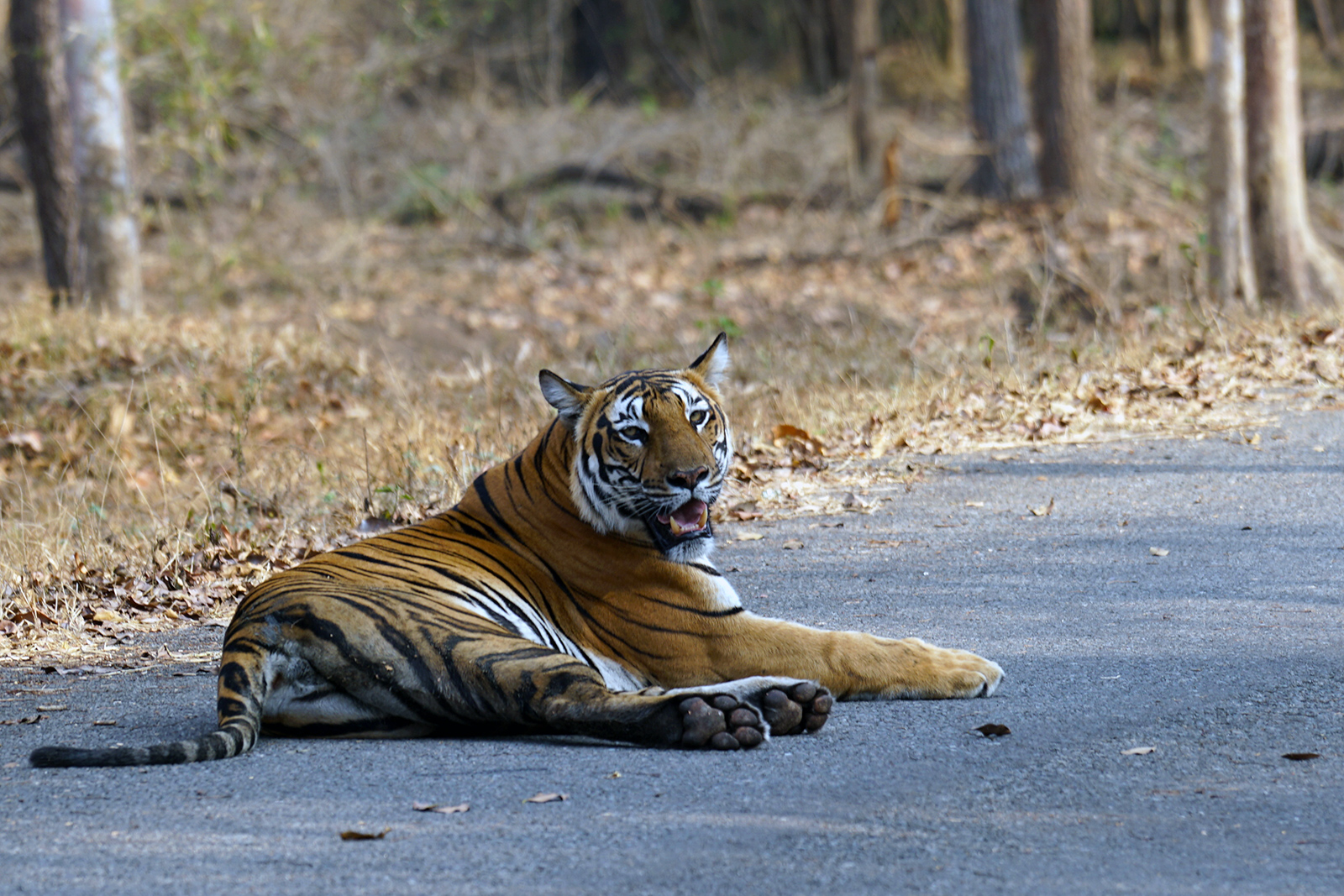 Was it worth it? Yes, because we saw tigers. To be honest, had we not seen tigers, it would have felt like a waste of time and money, as the overall experience was underwhelming and overpriced.

Let’s just say that going on an Indian tiger safari after a luxury Kenyan safari is setting yourself up for failure. They say that no one does luxury like Africa and that definitely rang true for us.