We hadn’t planned on visiting Peru. If you saw our initial tentative itinerary you would have seen that we were going to go from Lima to Santiago, Chile. But as we left the US, the protests and political unrest that swept through much of Latin America got really intense in Santiago, so while in Lima, we decided that since we had already bought tickets to Santiago with a layover in Lima, we would just extend our time in Lima and skip Santiago going straight to Patagonia.

Tiffany had been to Lima once before, and her main memory of that experience was eating beef hearts (anticuchos) and dining at one of the world’s best restaurants, Astrid y Gaston. So the moment we decided to spend more time in Lima we started looking for food opportunities. Our decision may have also been influenced by the frequently underwhelming cuisine in Lima.

Even though we only decided to go to Lima about 3 weeks ahead, we were able to get dinner reservations at the #5 restaurant in the world, Central. Needless to say, we were extremely excited.

But first we had to get to Lima.

The check-in process at the Medellin airport was quite arduous, as we stood in line for over an hour and then had to provide a startling amount of information about our plans to exit Peru, including flight numbers. With scattered information, slow mobile internet, and broken Spanish, we worked up a little sweat, but finally got things straightened out. Interesting side note: there’s quite a variance in the rigor of airports, airlines, and countries throughout South America when it comes to immigration, luggage policies, and airport security. When checking in for subsequent flights, we were overprepared with information, which in hindsight is better than underprepared.

Eventually we boarded our flight. Right after takeoff, a man near the front of the plane began singing, and was soon joined by another guy behind us. The song was kind of like a chant. The rest of the plane’s passengers seemed as clueless as us so we just looked puzzledly at one another and ignored it. The flight was otherwise uneventful.

Once we landed in Lima, many people dashed past us to get through immigration and customs, and Brian commented that they all had soccer jerseys on. Upon arriving at immigration, we saw the longest line, including hundreds of men in soccer jerseys, and we began to suspect we were in town with some die-hard fans. Thank God for free airport wifi, because after much sleuthing (mostly just Googling and trying interpret soccer crests) we discovered that we were in town at the same time as the Copa de Libertadores, the South American equivalent of the Champions League final.

So we were especially excited to be in town for such a big game. Our excitement could not compare to the traveling fans’ though.

Once we finally made it to our Airbnb, we asked our host for a recommendation for dinner. Without hesitation, he recommended a restaurant down the street, which also happens to be one of the top restaurants in all of Latin America: Isolina. There we had a very traditional meal consisting of generous portions of pickled fish (surprisingly tasty!), a stuffed potato, and some incredibly delicious, tender braised pork. We also got to see extremely rowdy Brazilian soccer fans, many of whom were enjoying generous portions of liquid dinner.

The next day, we searched for some ceviche at the local market. Our research pointed to a place that was so famous in Lima that it had to expand its stall 3 times to accommodate demand. However, we mixed up the name with the name of a less popular but still highly regarded ceviche bar, which was located in the same market, but significantly more difficult to find. We actually passed the stand we were originally looking for about 3-4 times, and it was indeed quite busy. Eventually, we found our way up to the mostly abandoned third floor of the market and located the cevicheria in question.

We both ordered combos, which started with an appetizer of spicy roasted peanuts and fish soup (which we learned many locals combined), followed by fish-and-seafood ceviche with chicharron de pescado (fried fish). To drink, we had chicha, which was like a wine-colored kool aid that tasted like un-carbonated cream soda. The food was all pretty tasty - not the best ceviche we would eat during our stay, but certainly the most authentic local ceviche experience.

The Copa final kicked off while we were eating, so we watched the first half on a tiny TV screen alongside 15 Peruvian men, and after finishing our lunch, continued to an English-style pub to watch the second half.

Along the way, at every establishment with a TV on the patio, we found locals crowded on the sidewalk watching the match. It was as if the city had literally stopped for the Copa final.

The match ended in incredibly dramatic fashion, with Flamingo scoring 2 goals in the final moments to steal a 2-1 victory over River Plate. We felt really happy for all the Flamingo fans we had seen around the city, and a little nervous about how intense the revelry might become.

Later in the evening, we went to our much anticipated dinner at Central. Since the restaurant has been such a success, they moved in early 2019 to an entire compound and opened an adjoining cocktail bar and a more casual restaurant upstairs (also on Latin America's 50 Best Restaurants). We arrived slightly before the dining room opened, so we got to try some of the excellent and unique cocktails. Tiffany had one with white chocolate while Brian got one which included sea salt and sea lettuce. We also witnessed some of the most intense (and emotionally expressive) cocktail shaking we have ever seen. Ask Brian to reenact it for you sometime if you want to see what we mean. 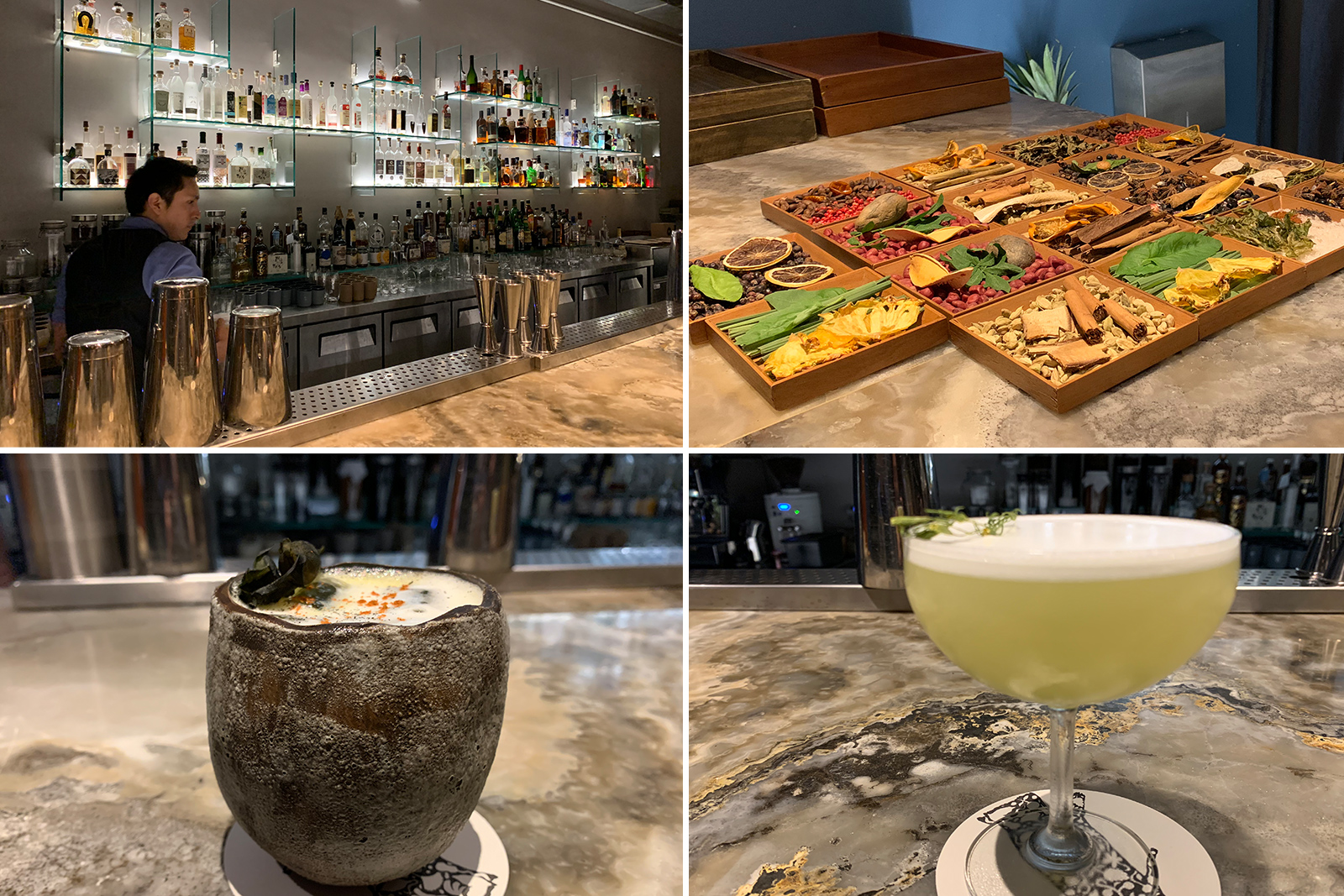 The premise of Central is a 16-course tasting menu which takes you on a journey through the diverse Peruvian ecosystems. Every course combines unique Peruvian ingredients from a particular ecosystem and altitude, so we ended up eating all sorts of things that the staff had to explain to us in great detail. The presentation and attention to detail was also top notch, including when they brought a smaller piece of tablecloth to cover up the stain left when Tiffany dropped a bit of one course on the table.

The experience was so unique and once in a lifetime that we ignored our usual rule about not photographing our food and took some pictures. They also gave us the menu to take home and a little keepsake artistic rendition of the tasting menu. 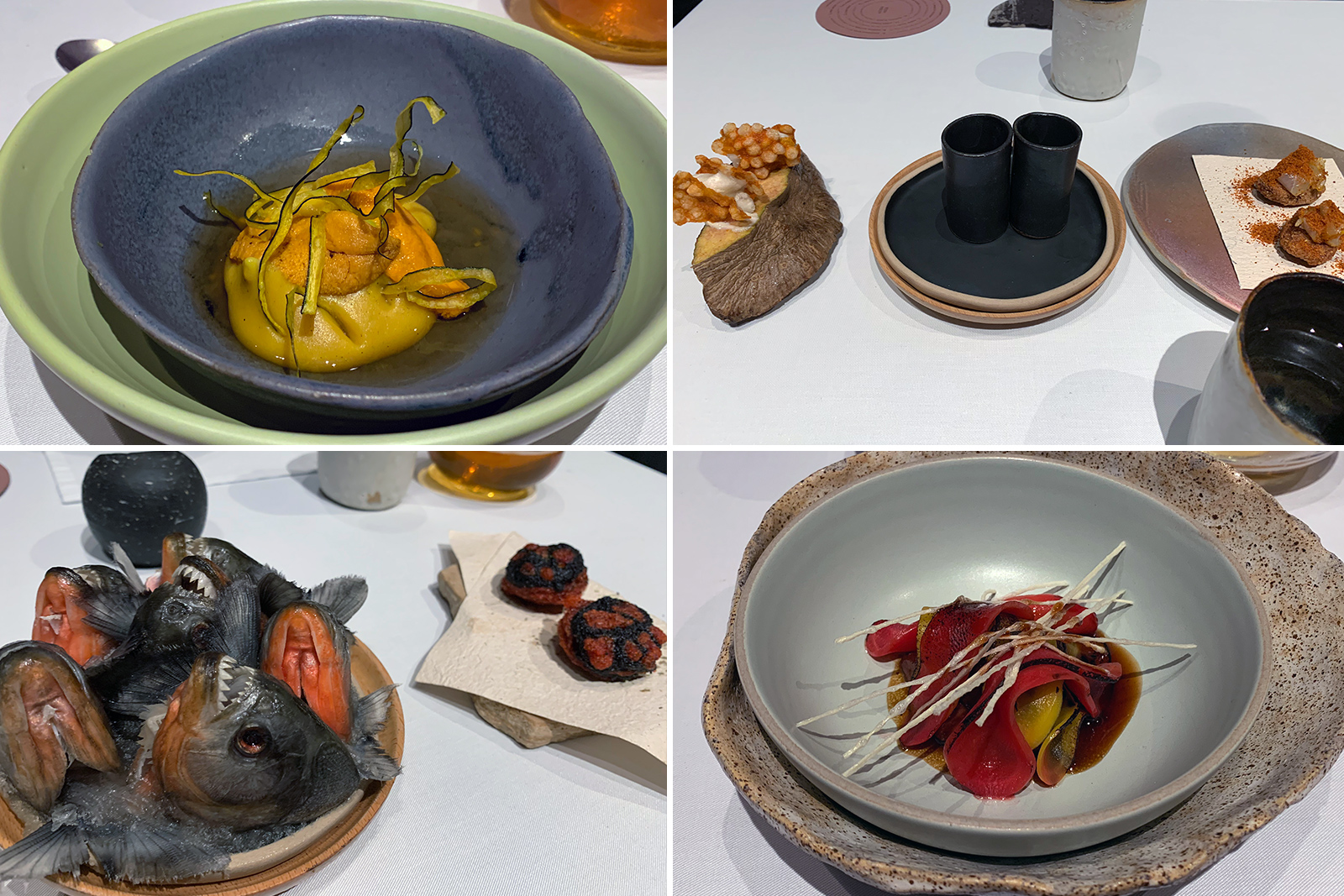 We thought that given the difficulty of getting a reservation at Central, it would be the one place in Lima where we would not find Brazilian soccer fans. But sure enough, even at Central there was a table of fans who looked to be having just about the best day ever.

Other food and drink highlights of Lima included discovering that we actually prefer the maracuya (passion fruit) sour to the pisco sour, rediscovering Lima’s best churros with dipping chocolate (Tiffany recalls this experience from her first visit to Peru 12 years ago with much clarity), eating enormous chicharron sandwiches (El Chinito), nothing but stellar recommendations from the staff at the restaurant Siete, and even eating a simple roasted chicken with potatoes at a fast casual chain.

And a definite food highlight: eating ceviche at one of the most renowned places for ceviche, La Mar. We shared this experience with an English chef who had just returned from a two-week ayahuasca retreat and was brought to tears the quality of food, and of course, with one hundred Brazilian soccer fans.

We spent most of our time in Lima walking various neighborhoods, taking in the scenery, and enjoying the beautiful weather. We were even able to rent bikes and cruise around the Miraflores neighborhood. 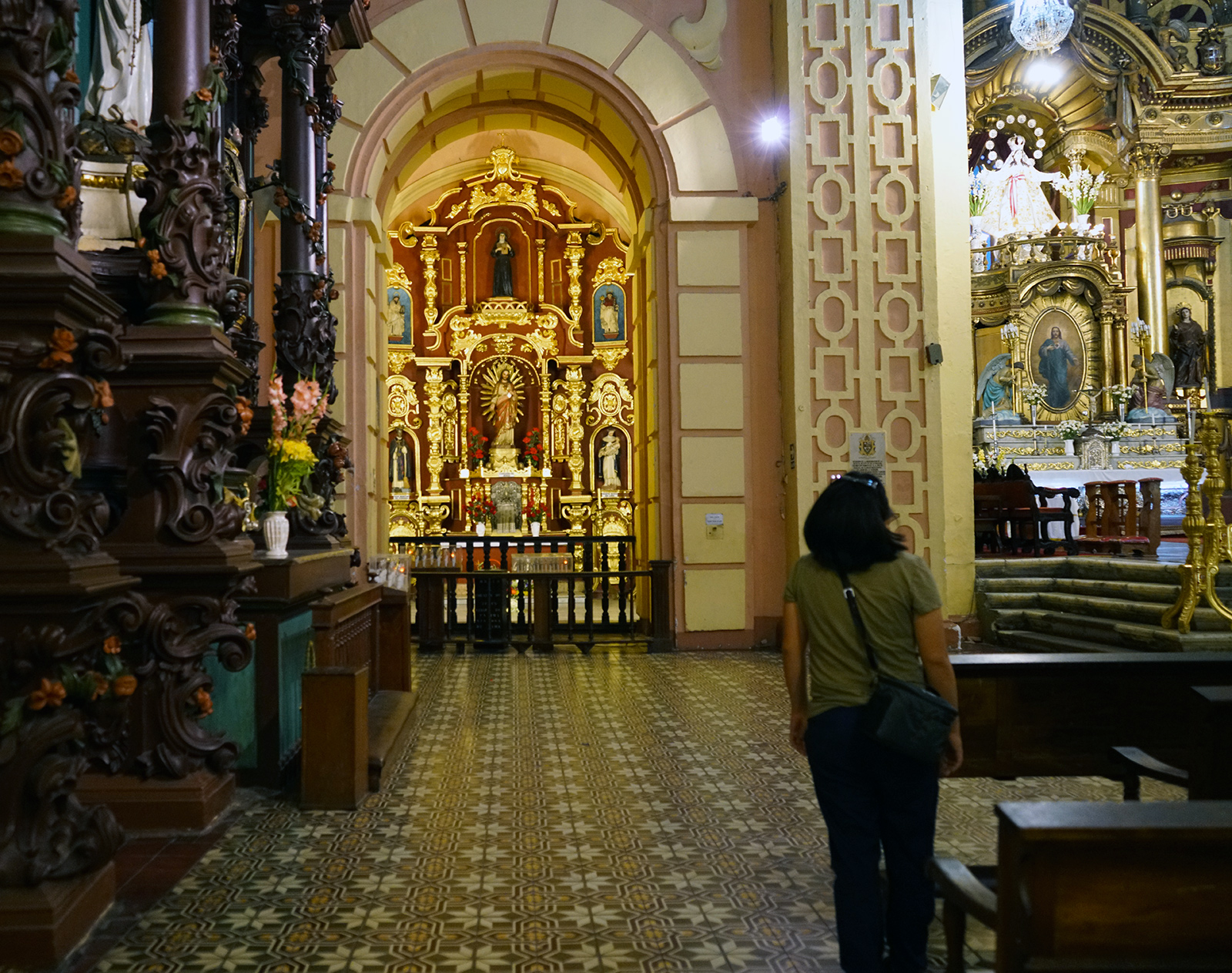 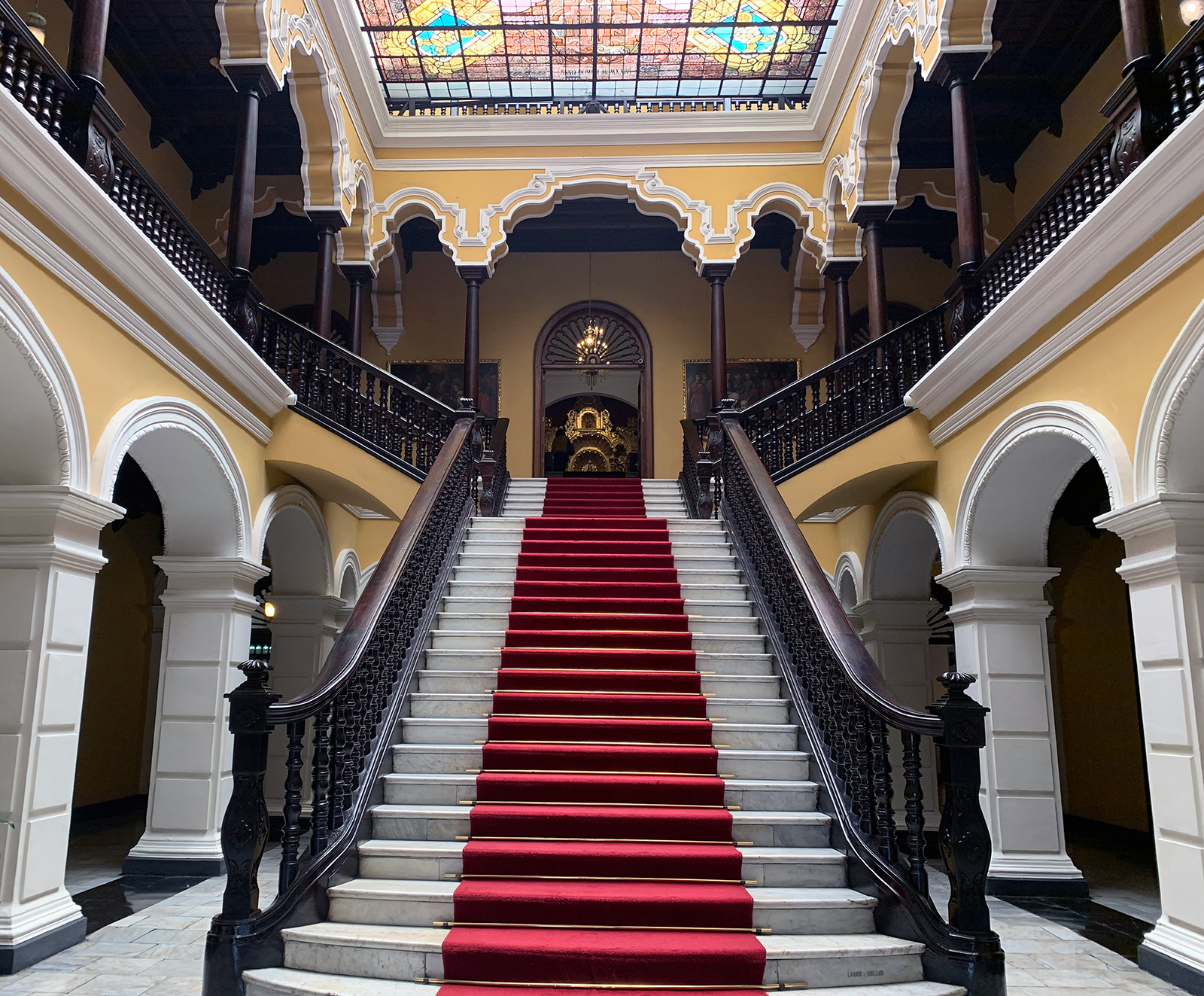 We also visited an artisanal cocktail bar, Carnaval, a place that applies Peruvian culinary prowess to booze, not unlike the Aviary in Chicago, but with a touch less pretense and a fraction of the price tag. Their menu is extensive, and decisions difficult. They gave us a welcome drink (or an amuse booze) which we hope to replicate at home someday. Our cocktails were super interesting both in flavor and in presentation, as Tiffany’s included pop rocks and Brian’s drink glowed. We also enjoyed peeking into the ice factory, a room where they craft 20 different styles of ice for their cocktails. 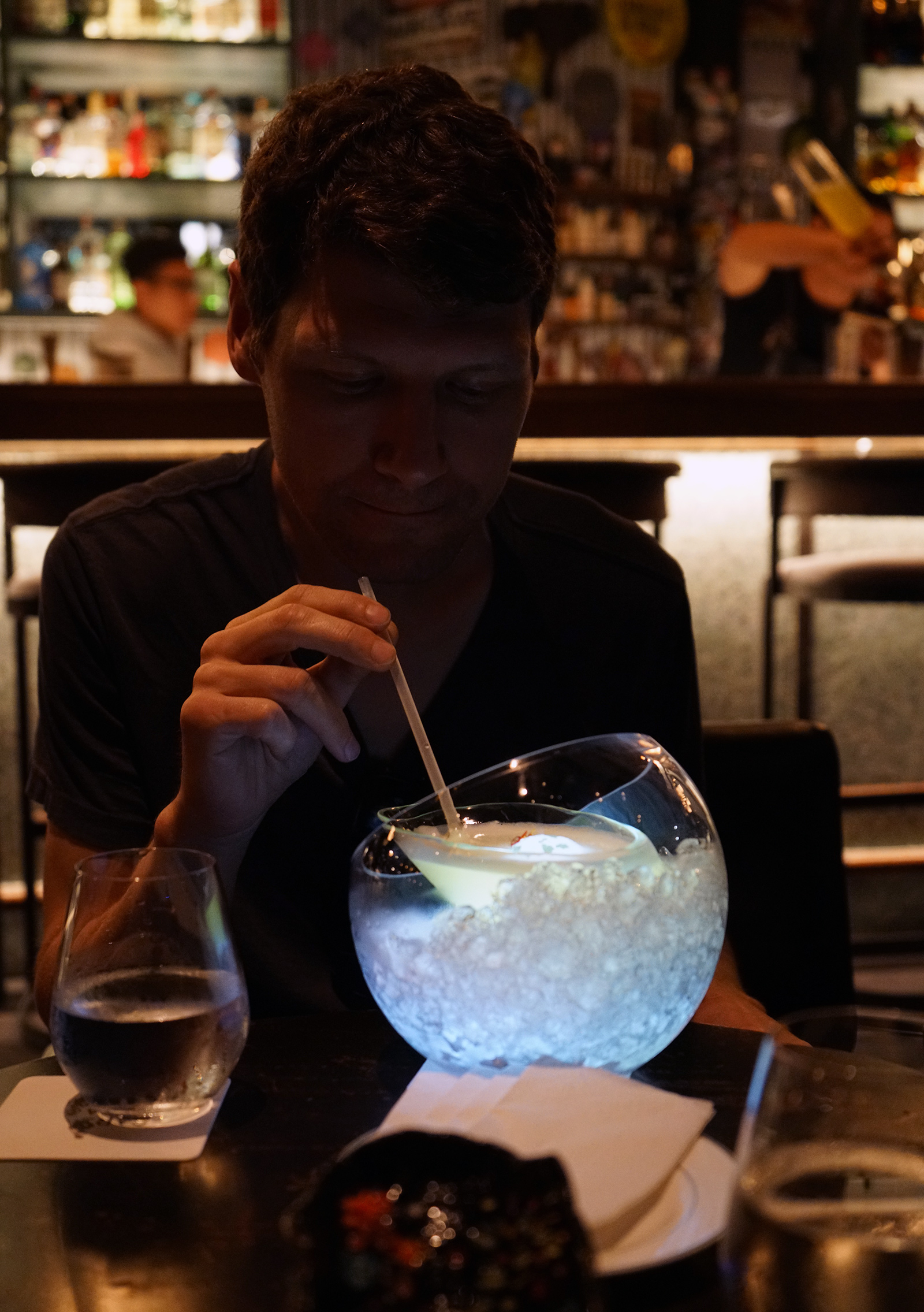 As food snobs, it was such a treat to eat extremely well for about five days. We can’t wait to revisit Lima and explore more of Peru in the future.

We didn’t know it at the time, but our taste buds’ ecstasy in Lima would be a far cry from our experience in Patagonia, where what awaited us was the worst pizza in the world and multiple days of just canned vegetables...