Exploring the cliff dwellings of some of the earliest known Americans.

Our final stop was Mesa Verde National Park in Colorado, to see cliff dwellings and ruins of ancient Pueblo cultures.

One amusing detail about the drive to Mesa Verde is how prescriptive Colorado state highways are about your speed when approaching a town. Rather than giving you a “Reduced Speed Ahead” sign before a significant reduction, Colorado eases you into it by every few hundred feet dropping the speed limit 5mph. Seriously. You go from 65 to 60 to 55 to 50 to 45 to 40 to 35 to 30, and sometimes even to 25. It’s actually quite difficult to execute.

To be honest, our expectations for Mesa Verde were fairly low. We had just concluded an epic series of hikes and vistas in our travels across Utah, and Mesa Verde doesn’t have the same hype. It’s not really a park you hear about from friends, or that you go set out to go to, or that’s near something else you’re going to see. But our subsequent destination was Tulsa, and there isn’t really a straight shot route from Moab to Oklahoma, so we figured it was worth going slightly out of the way to see Mesa Verde. When else would we make it out this way?

Well, it’s actually a pretty solid national park. It’s impressive to see the well-preserved cliff dwellings and the ruins of ancient American cultures, which span over 1,000 years. For history buffs, or really for anyone who was educated in American schools, you’ll learn some new and interesting facts about pre-Columbian American cultures in the southwestern United States.

However, there isn’t really a lot to do. Granted, we decided to take a half day to drive through the park, as a slight detour during a day of driving, but you can tell from the literature you get from the park that it’s a different sort of experience than your Arches and your Zions. It’s much less about hiking and camping, and much more about preservation and education. And driving.

The drive into the park involves 20+ miles of switchbacks to ascend a mountain and come around the other side, where the Pueblo people dwelled. Most of the drive through the park is at about 35mph, so it takes a while, which gave Tiffany a chance to nap both on the way in and out.

We followed the scenic trail, which takes you through a series of village ruins, spanning the 1,000+ year history of Pueblo peoples in the region. You walk through the ruins and see how the buildings and village planning evolved over time. 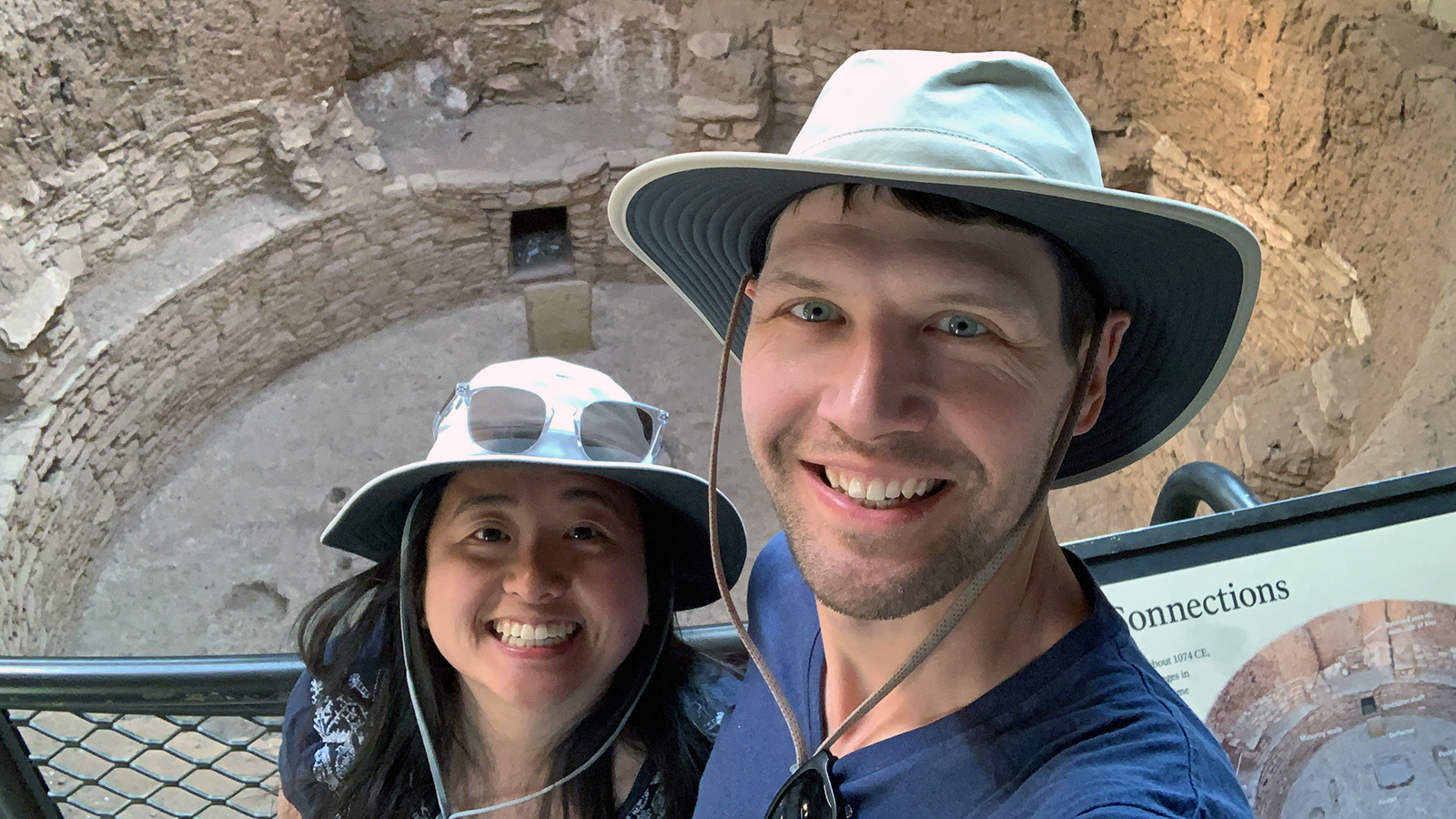 While eye-opening and impressively well-preserved, the trail becomes a bit repetitive after half a dozen stops.

However, the conclusion of the trail is the famous glimpse of the cliff dwellings, the ones you’ve likely seen online. These are super impressive. We stood in awe for quite a while. Brian in particular loved this portion of the trip, evidenced by his repetition of “amazing, this is so cool.”

You can book guided tours of these cave dwellings, which would have been cool, but with our impending 4+ hour drive to Albuquerque, we did not have time to tour any of the sites. If you decide to visit someday, take a full day at the park so you can take a tour in addition to the scenic drive.

We spent the night in Albuquerque, which is about 9 hours from Tulsa, where Brian’s family lives.

Once you enter New Mexico, you start seeing a significant increase in billboards for two things: evangelical Christianity, and warnings about drunk driving. If you head east, you’ll keep seeing the same billboards until you hit the Atlantic Ocean. So while in the Southwest, it feels like New Mexico is the outskirts of the South.

We arrived late in the evening, on a weeknight, so our options were somewhat limited. We ate at a legendary Burque diner, Frontier, which spans an entire city block and closes for only 3 hours a day. It’s also located across the street from UNM, and is a super popular after-party spot for late night eats or study group gatherings. A cop patrols the 6+ dining rooms, which are decorated with kitschy western art, including a velvet John Wayne (one of at least a dozen John Wayne portraits). Needless to say, it was quite an experience.

The menu is overwhelming consisting of burgers, tacos, burritos, salads, sandwiches, New Mexican cuisine, and many quantities of chicken fingers. There might be infinite permutations of breakfast. Some employees are solely dedicated to french fries and desserts. With that many choices to filter through, it’s helpful that there’s a long line.

Oh, we have to mention the tortillas. If you order anything inside a tortilla (e.g. one of their massive burritos, or a platter of enchiladas), you get a side of flour tortillas (yes, plural tortillas). This is how we ended up with 7 tortillas to power through.

Unfortunately, the food was meh. The best thing we ate was a breakfast burrito with sausage. But being a diner across from a university, Frontier is super cheap - every individual item was between $1 and $3. And it’s quite a scene - we definitely won’t forget the experience.

We believe one of the joys of traveling across the country (nay, the world) is checking out localized McDonald’s menus. After crossing into New Mexico, you see signs for chile verde and/or green chile something or other at every restaurant, including McDonald's. The McDonald's breakfast burrito is always delicious, so the green chile variant was intriguing. On our way out of Albuquerque, we stopped at McDonalds to indulge our curiosity. While it’s not going to make our list of top 10 meals of 2019, kudos to Mickey D’s for creating a solid breakfast burrito.

We documented the experience so you can relive it with us and see our real-time reactions, if that’s something you find appealing.