Our Night at the Movies

Seeing a Bollywood Movie at India's Most Famous Cinema

Movies are a big deal in India. The Indian film industry produces nearly 4X the number of movies as the US does every year, and ranks sixth globally in national box office revenue. One out of six Indians goes to the movies every week -- meaning watching a movie in a movie theater. This means one of the quintessential experiences of Indian life is going to the movies.

The Raj Mandir, on the edge of the “pink city” of Jaipur, is one of the most famous movie houses in India. Like the old city, the Raj Mandir is painted pink. It was built in the 1970s, seats about 1200 people, and sells out most nights.

Several publications (CNN and Men’s Journal) rank Raj Mandir as one of the top places in the world to watch a movie. So we decided this was the perfect place to see a movie in India, regardless of what was showing.

What we got was Bollywood action movie Baaghi 3, which premiered the weekend before we arrived. The Raj Mandir is a single screen movie palace, so it was the only film playing during our time in Jaipur.

We decided we should know a little about what we were in for, so when we arrived in Jaipur, we streamed the original Baaghi on Netflix.

The word baaghi is Hindi for “rebel,” so Baaghi tells the story of a rebellious young man, Ronny, who learns to control and channel his rebellious spirit through the disciplined study of martial arts. His martial arts prowess then enables him to rescue his former girlfriend, a semi-famous Bollywood actress, when she is kidnapped by the leader of Bangkok’s underworld (who also happens to be the spoiled son of the martial arts guru who taught Ronny). This convoluted setup puts Ronny on dual timeline collision courses with destiny and fate (but which is which?).

The film is one part Karate Kid, one part Taken, and another part romantic comedy. Oh and there are some solid Bollywood musical numbers for good measure. “That sounds like at least 3.5 movies,” you wonder, and you’re right. And while it’s not very good, Baaghi was wildly successful at the Indian box office, leading to two sequels.

The star, Tiger Shroff, is quite famous and has landed many endorsement deals. While browsing through Indian bodegas, we would often see Tiger staring at us from a box of headphones, or vitamins. He has terrific hair and 8-10 pack abs. 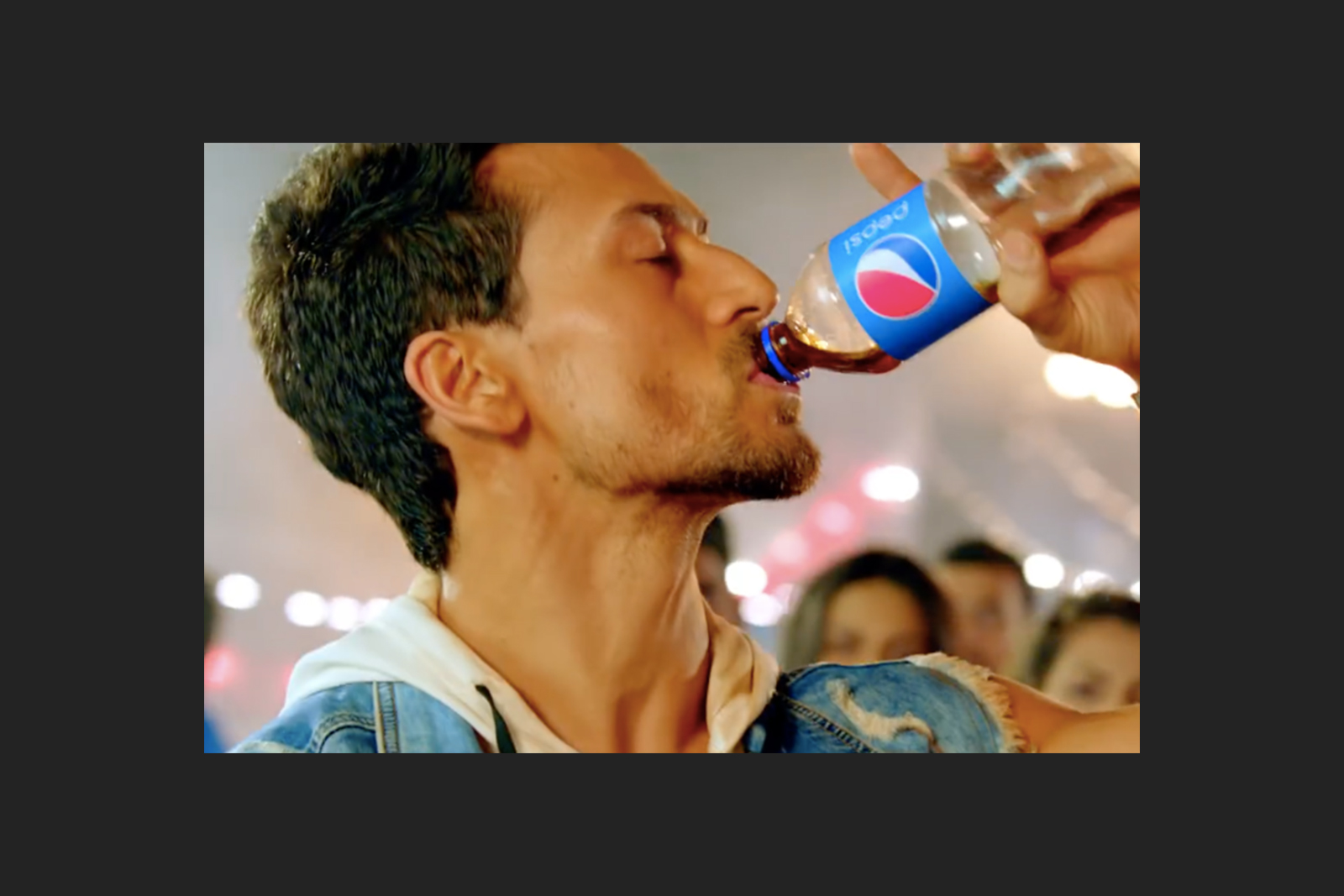 We weren’t exactly excited about seeing the third Baaghi film, not merely because we didn’t watch Baaghi 2. Everywhere around Jaipur, we saw posters for the latest film, which plays a lot more like a Rambo sequel. 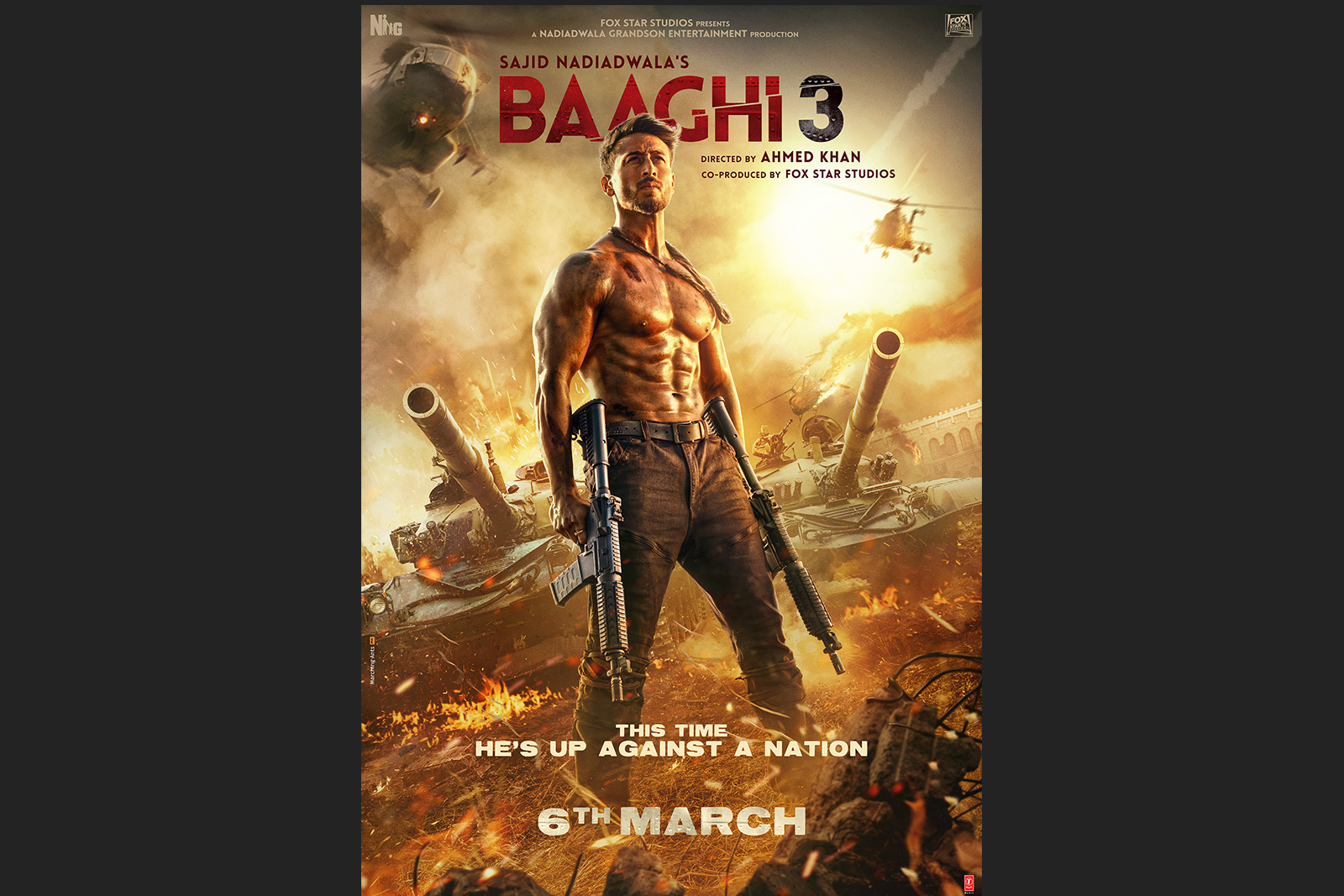 After a little waffling about whether we should go, given the quality of Baaghi, we decided to check out the Raj Mandir during an initial exploration of Jaipur.

When we arrived, we found a lengthy line at the box office, nearly an hour before the box office opened. This was opening weekend, and the young men of Jaipur were really showing up for Baaghi 3. So we decided to grab dinner instead and return during the week.

We returned to squeeze in a screening of Baaghi 3 before catching an overnight train to Jodhpur. The movie started at about 10:30pm. With a runtime of 150+ minutes, we figured we could always catch a little sleep.

Tickets for the film were cheap. We chose a preferred section of the theater and still paid under $2 USD apiece.

The Raj Mandir is spectacular. When you enter, there’s an immediate wow factor. The lobby recalls the glitz and glamor of studio-era Hollywood, with silver chandeliers overhead and a magnificent spiral staircase leading to the balcony. The auditorium itself is vast and ramped (no stadium seating) with a magnificent heavy curtain in front of the screen. It really made it feel like a special occasion. 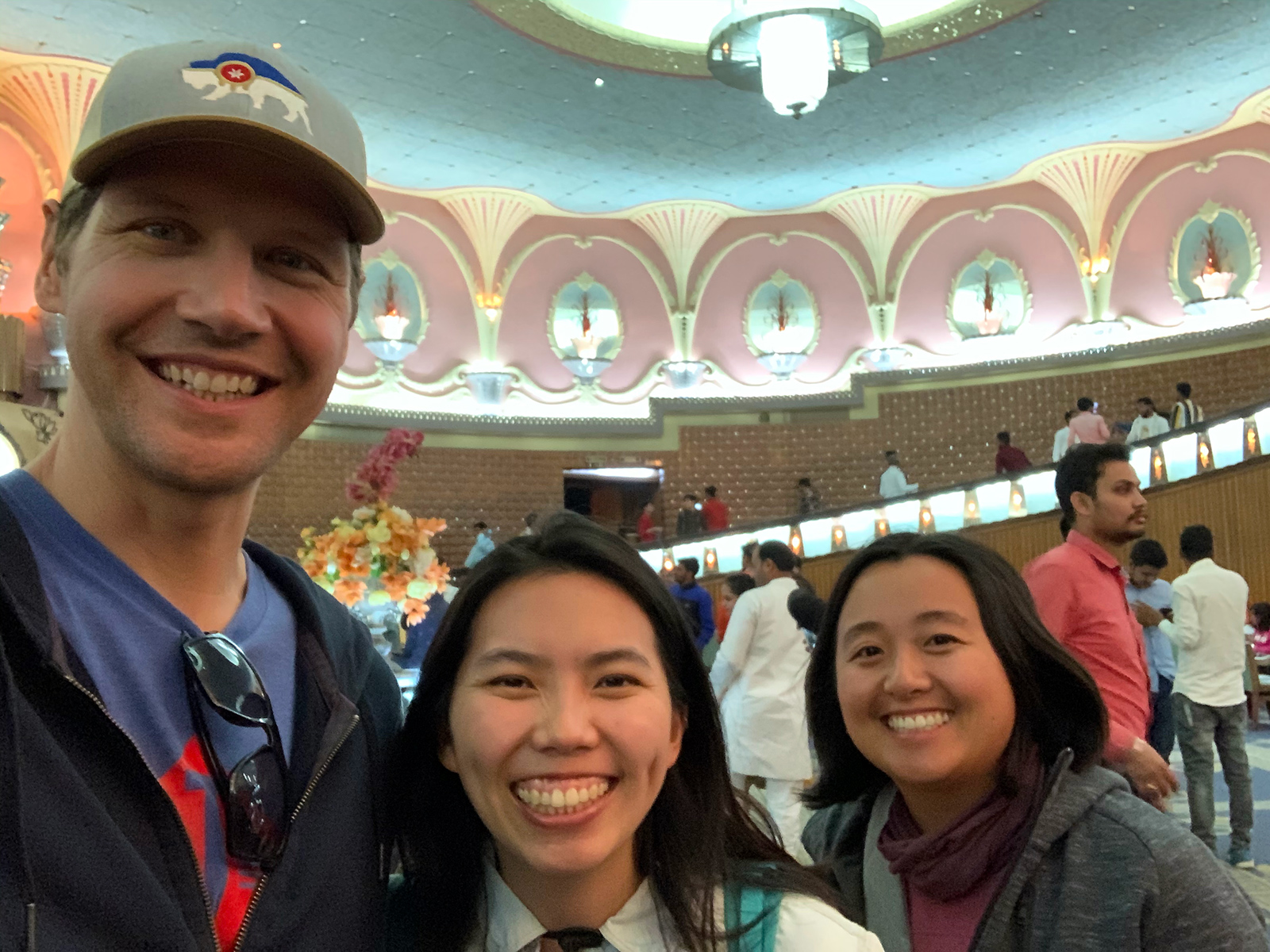 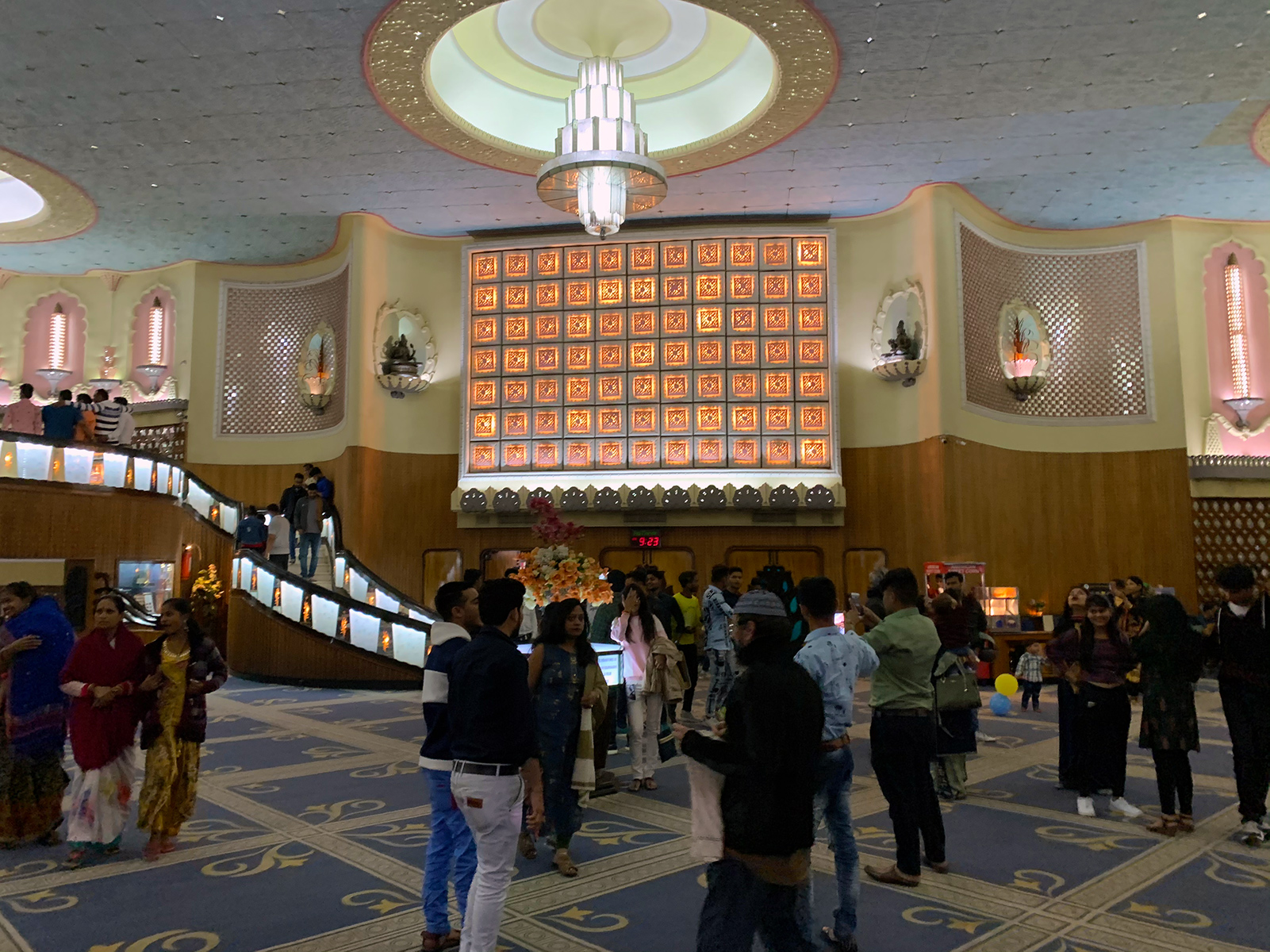 As our group was composed of two women and one man, we couldn’t help but notice that there were very few other women in the theater. The crowd was at least 90% 20-something year old dudes. Sure, it was an action film, but we kind of wonder whether going to the movies is more of a man's activity in India.

A few trailers preceded the feature, and we immediately noticed a few particulars of Indian moviegoing:

We also quickly discovered we weren’t going to understand any of the dialogue, as the film was not in English (we think it was filmed in Hindi and dubbed in the local language for our viewing). For Tiffany and Priscilla, this was a cue to catch some sleep. For Brian, this was a welcome chance to return to his Film Studies days in college, and focus on the “visual language” of the film, or whatever.

Turns out the film wasn’t that difficult to follow. If you couldn’t tell from the poster, the stakes are higher than ever in Baaghi 3. The only thing higher than the stakes is the number of times he loses his shirt.

This time, Ronny is more vigilante than baaghi, as he uses his martial arts prowess to help his brother, a milquetoast policeman, solve a series of crimes and clean up the streets of Agra. The only problem is that the world of organized crime in Agra is somehow connected to ISIS, and so Ronny essentially has to single handedly bring down ISIS in order to save his brother, and presumably, the world.

“Wait,” you say, “you said he takes on ISIS. The poster says he takes on an entire nation. Is the film basically saying Syria is entirely ISIS?”

Yup. Baaghi 3 doesn’t have time or motivation to split hairs with geopolitical nuances. It is an incredibly overtly racist movie. It’s like an old Western where the Indians are the villains, and one white cowboy has to eliminate an entire tribe.

The film seems like an illustration of the current political climate in India. The Modi administration has come to power alongside an alarming trend towards Hindu Nationalism and anti-Muslim sentiment among the far right in India. Unemployment is also high among young men. This film gives that crowd a powerful, young, handsome Indian hero to root for, along with a dangerous foriegn enemy, and they really seemed to love it.

The biggest cheer came when the leader of ISIS, frustrated at a series of crushing defeats, angrily questioned his henchmen about their tormentor (spoken in Arabic? But conveniently subtitled in English). “Is he American? Russian? Mossad?” “No. Indian.” Hooorraaaaayyyyyyy!!!!!!!

There was such frequent cheering over punchlines, stunts, and Shroff’s abs that Tiffany and Priscilla awoke every 5 to 10 minutes to see what all the fuss was about. It wasn’t the most comfortable moviegoing experience for them, to wake up hearing a bunch of 20-something men cheering and see an image of an explosion or pile of incapacitated ISIS henchmen. Or when they were cheering for a closeup of the female lead.

Spoiler alert - Ronny wins. Once the action was over, everyone stood up and left the theater. There were still 5 minutes left in the movie, a denouement in which Ronny may or may not have gotten the girl. It was really hard to see with all the people leaving the theater.

We stayed into the credits and left, the last people to exit.

While the movie was a steaming pile of garbage, it’s hard to be sad about that being our experience of movies in India. Baaghi 3 was a huge hit, and with covid-19 closing theaters across India for an indefinite period, it might end up being the biggest box office hit of 2020. It’s certainly a movie of the times, and we certainly won’t forget the experience.

Hopefully Raj Mandir can stay in business through the pandemic. It’s truly an awesome place to see a movie. If you’re ever in Jaipur, check it out. Just maybe try to see a romantic comedy or a Hollywood film there instead.