One of our favorite days of travel

If you're familiar with Patagonia, you know that the region is HUGE and difficult to get around (at least in terms of requiring a lot of time and patience). As a result, we had to narrow down which parts of Patagonia we actually wanted to visit. Places like the marble caves in Chile ultimately didn’t make our final list of destinations, but one place that never left our list was the Perito Moreno glacier.

The Perito Moreno glacier is the main attraction in Los Glaciares National Park. It is one of only a few glaciers in the world that is not receding due to climate change. Not only is this great for Argentina’s water supply, but it also means that it’s one of the most accessible glaciers for tourists. Not only can you see it clearly from land, but you can also walk on the glacier.

Despite how awesome glacier trekking sounds, it took us awhile to actually decide to book our trek. This was mostly because it was by far the most expensive activity we would do in our South American travels. We were also skeptical that we would actually get to do all of the epic things the pictures on the tour website depicted. But after some hemming and hawing we chose the cheapest trekking option ($120 per person) and booked it.

The morning of the excursion we had to get up early, find an ATM, and then head to the tour agency’s office where the bus would pick us up. It turns out the travel agency actually has many offices so we panickedly powerwalked an extra half mile to the correct office worried that the bus would leave us behind. Although we got to the office 10 minutes after our scheduled pickup time we made it with plenty of time - and sweat - to spare.

We ended up being the first people on the bus, which meant we got to sit up front with a great front window view and close proximity to the driver’s radio (you’ll see why this was an important feature in a bit). We marveled at the excellent logistics management of the bus pickups, as the bus made a quick loop of El Calafate to pick up some of our fellow tour attendees at their hotels, and occasionally rendezvoused with smaller vans full of people who had been picked up at other disparate locations. In short order, we had a full bus of tourists and began the hour-long drive to Los Glaciares National Park. At the park, we encountered another excellent logistical feature of this tour, as a park employee hopped on the bus to collect our entrance fees.

After a further 30 minute drive into the park, we could finally see the glacier. We could not have scripted a better reveal, though. Throughout the bus ride, the bus driver had been listening to an eclectic playlist of music including songs in both English and Spanish. But as we rounded the corner where the epic glacier came into view the driver put on “My Heart Will Go On” just low enough for the first couple of rows of the bus to hear. We have no idea if this was excellent soundtrack design, a joke, or just a coincidence but we will forever treasure this memory. We actually captured a bit of this experience on video for you; please excuse Brian’s commentary, this is completely unedited.

Once we got to the glacier parking lot, we had about an hour and 45 minutes to explore the many paths to glacier viewpoints on our own. The glacier is about 70 meters tall above the water level and 3 miles wide at its widest. It is truly a sight to behold and we spent a lot of time taking photos and waiting for other people to get out of the way of our photos. 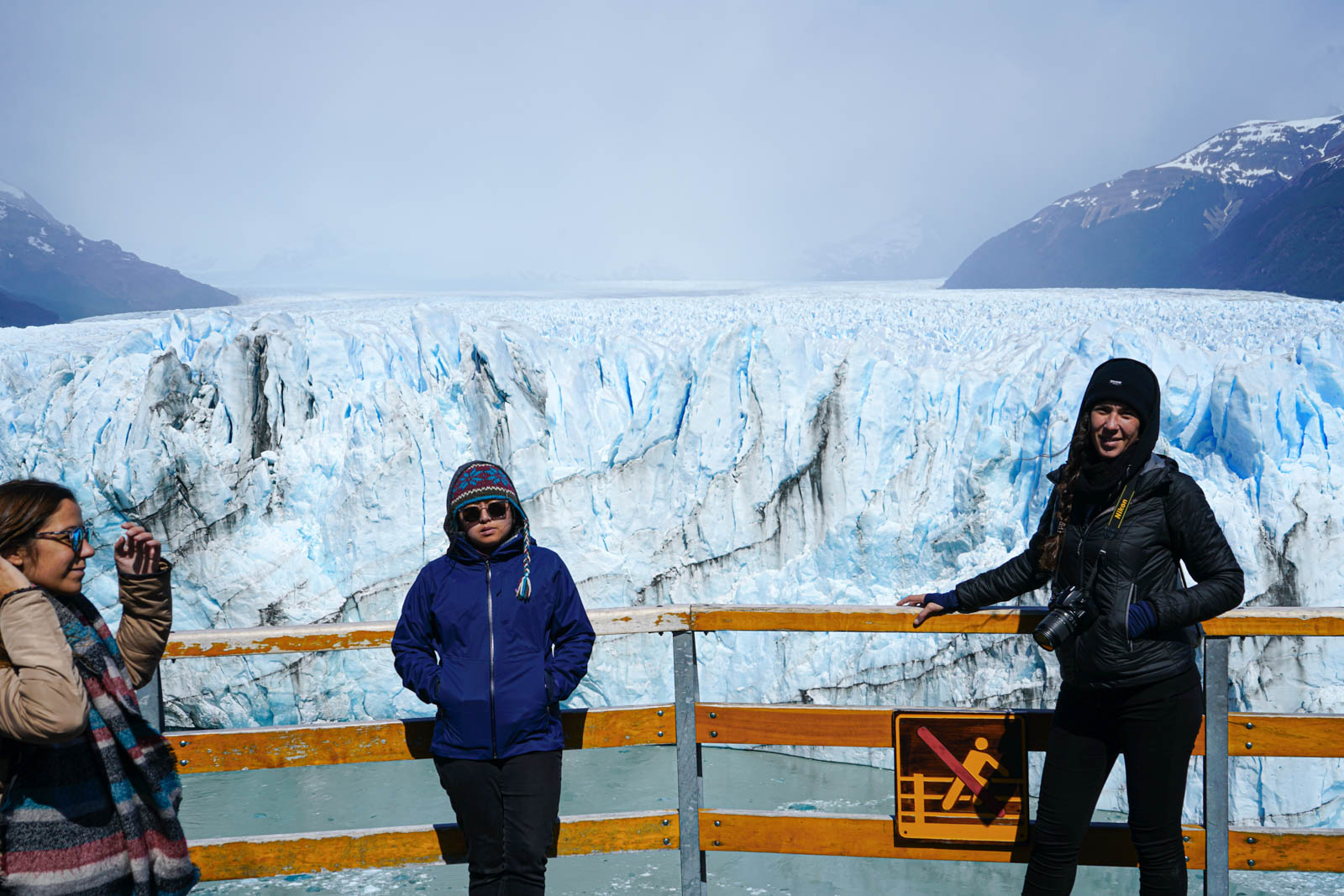 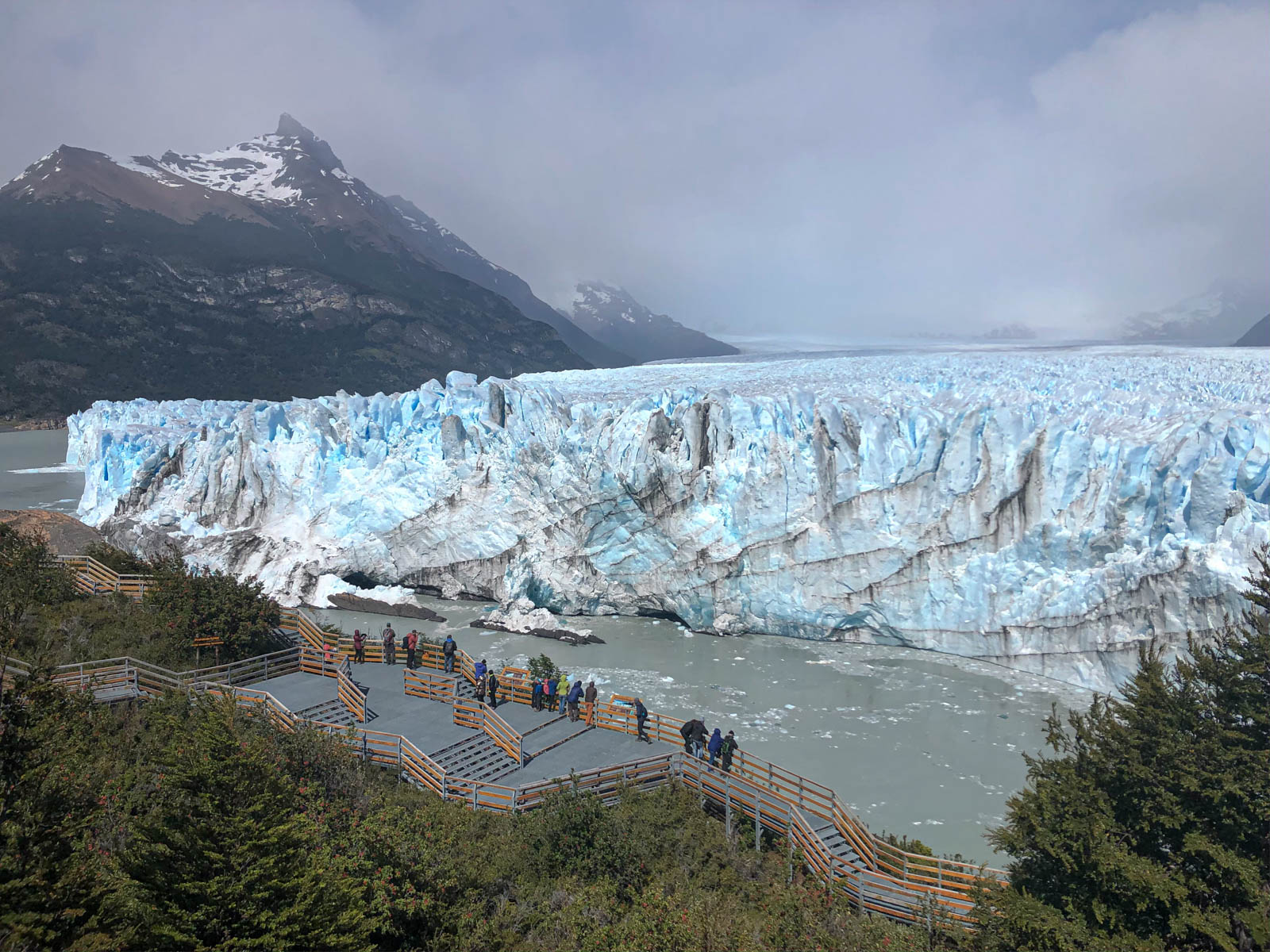 Brian was even photographing the glacier when a large piece of ice calved (broke off) and fell into the lake. This happens often but randomly and the other pieces we saw were much smaller so seeing and capturing this occurrence was pretty exciting for us. Each piece that falls into the lake makes a very thunderous noise which is delayed by the distance between the viewing platform and the actual glacier. It is amazing.

One of the unique features of this glacier is the fact that instead of retreating it is pushing down towards the viewpoints. Because of this sometimes the glacier will create a glacier dam and trap the water on one side of the lake until the pressure of the water ruptures the glacier. Through the magic of science this often will create a tunnel in the glacier which you can kind of see in our photos. A naturally occurring ice tunnel in addition to this massive glacier? It’s just so epic and astounding.

After walking the platforms seeing different angles of the glacier and fighting the epic Patagonian winds, we returned to the bus to board a ferry that would take us to walk on the glacier. In keeping with the theme of this day, the boat ride was awesome and gave us more perspective on just how massive and tall the glacier was. We also got reacquainted with the intense Patagonian winds. 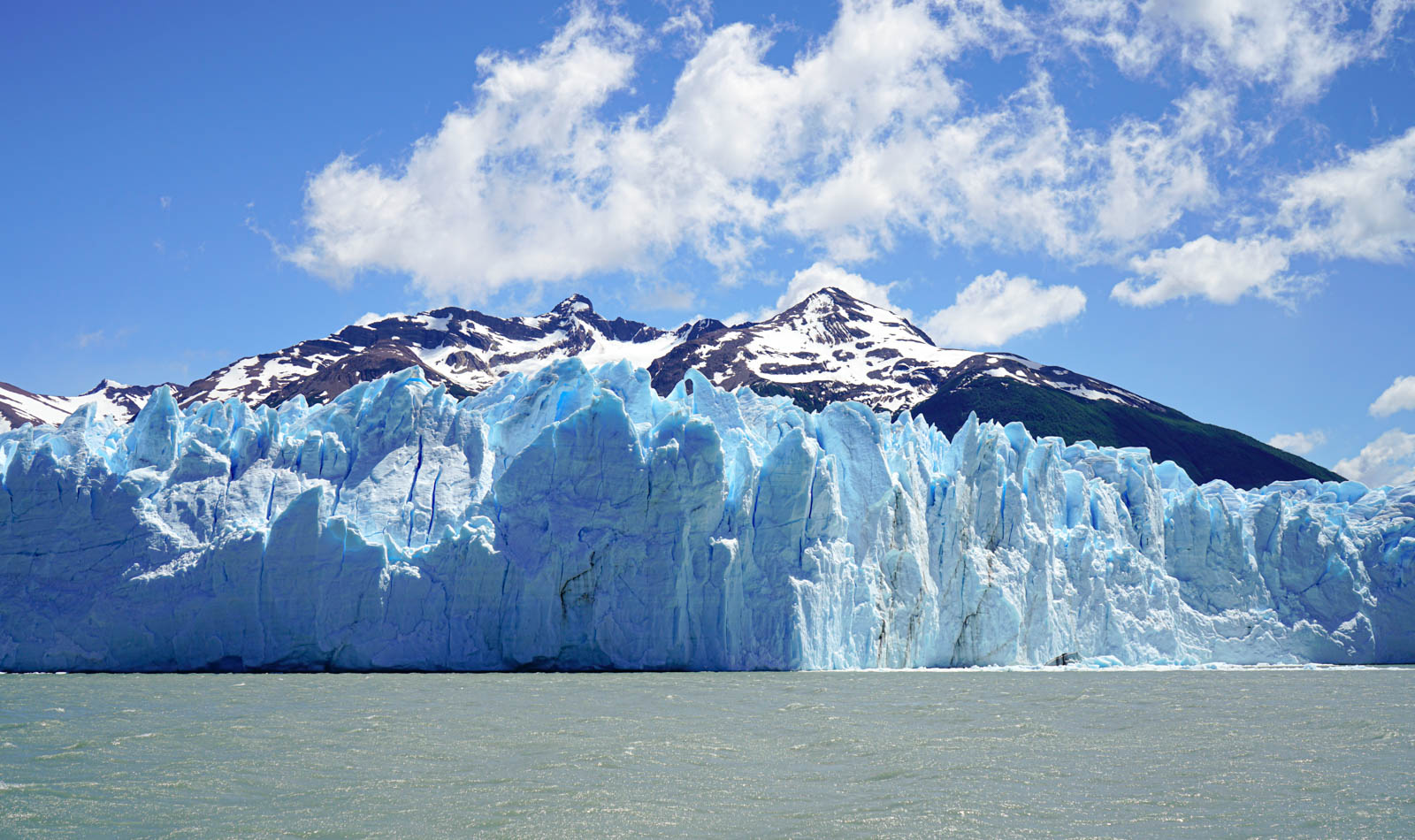 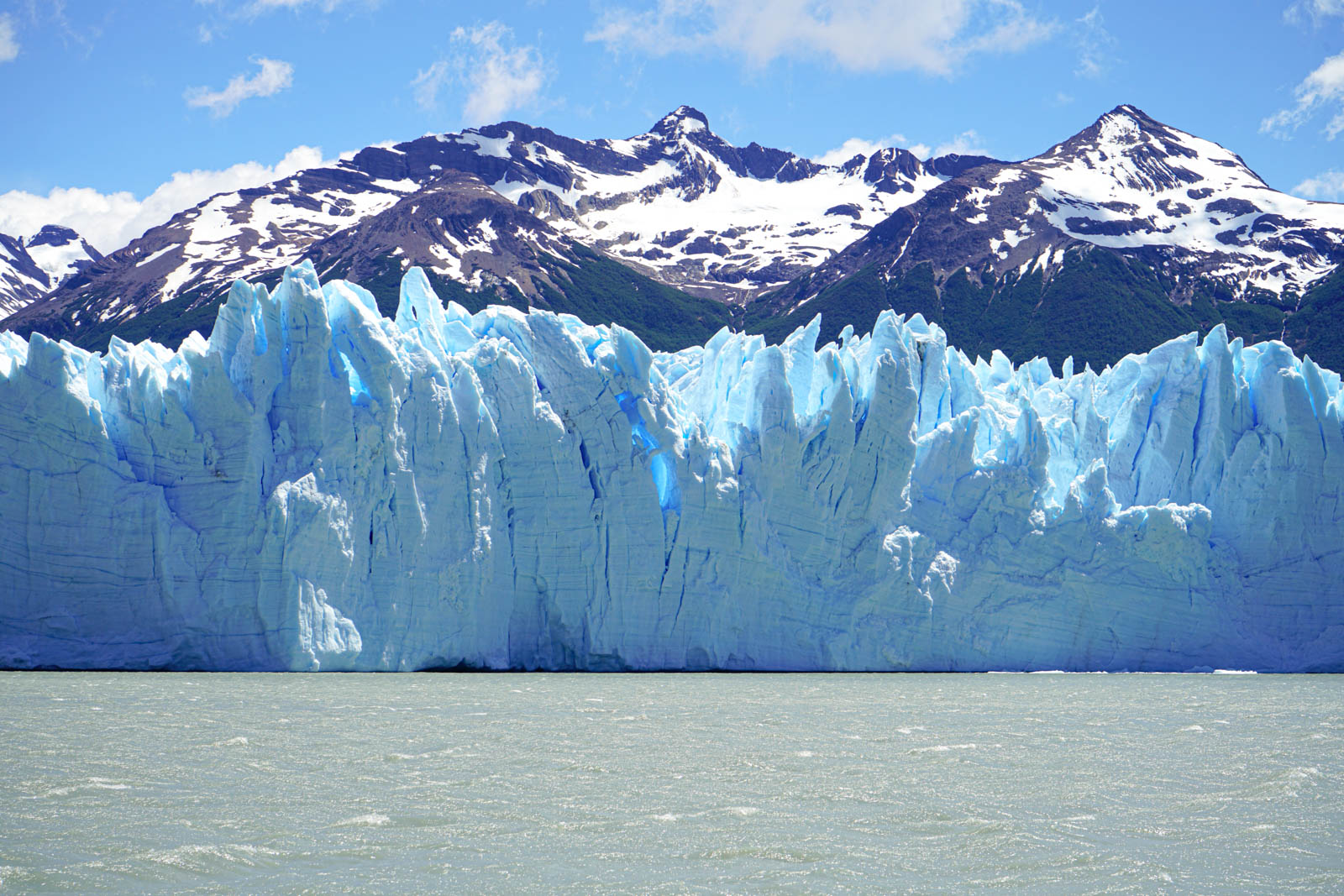 The docking process took a surprisingly long time due to those winds but eventually we got off the boat and met our trekking guides. They split us up into smaller groups (ours was the bilingual group while two other groups operated only in Spanish) and explained some of the science and history of the Perito Moreno glacier. After a nice hike to the glacier the guides helped us strap on our crampons and handed out the helmets.

Finally we got to go onto the ice. We had to learn a new way of walking with the crampons which was a little strange at first but we got the hang of it pretty quickly. As we walked on the glacier, the guides showed us how crevasses in the ice were created and expanded over time. We also got to see the only living creature that can live on the glacier - a small insect that creates a chemical that acts as an antifreeze, allowing the bug to survive in the cold of the glacier.

The fact that we were now walking on the massive glacier that we had been looking at from afar was almost incomprehensible. It made the size of the glacier that more real. The glacier’s terrain consisted of awesome inclines and sudden drop offs, as well as streams and pools of the bluest glacier water. We took as many photos as we could. 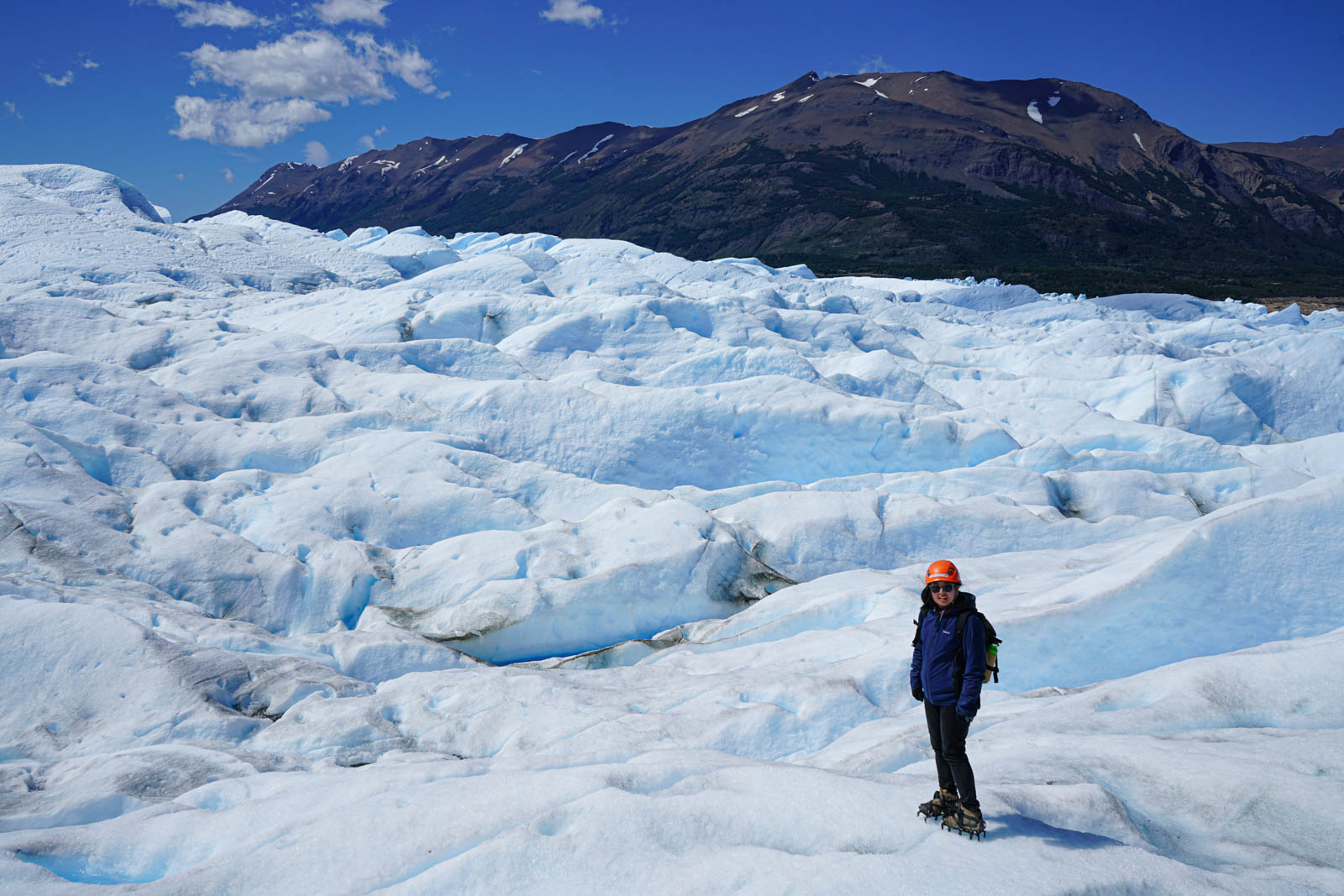 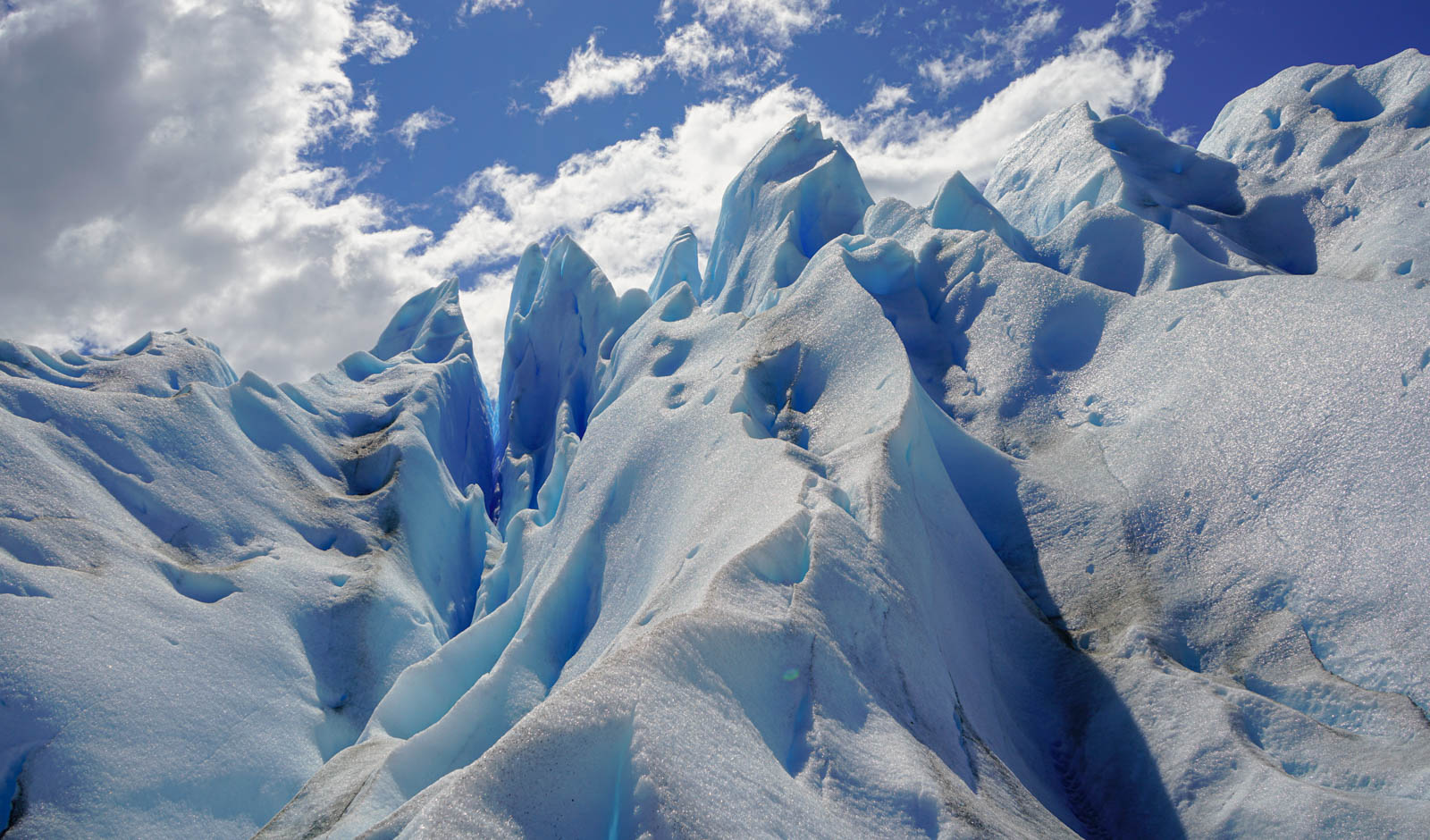 We walked on the glacier for about 90 minutes before heading back towards the crampon stations. Before leaving, we were treated to some chocolates and whiskey served on glacier ice, which they call “one million year old whiskey.” Here is a video of us drinking the whiskey.

After taking off our crampons and helmets we slowly headed back to the dock, soaking in the last views of the glacier.

P.S. We actually have so many other photos and videos of the glacier. Let us know if you’re interested in seeing those and we will be happy to share.