Getting away from the honking by wandering in the desert 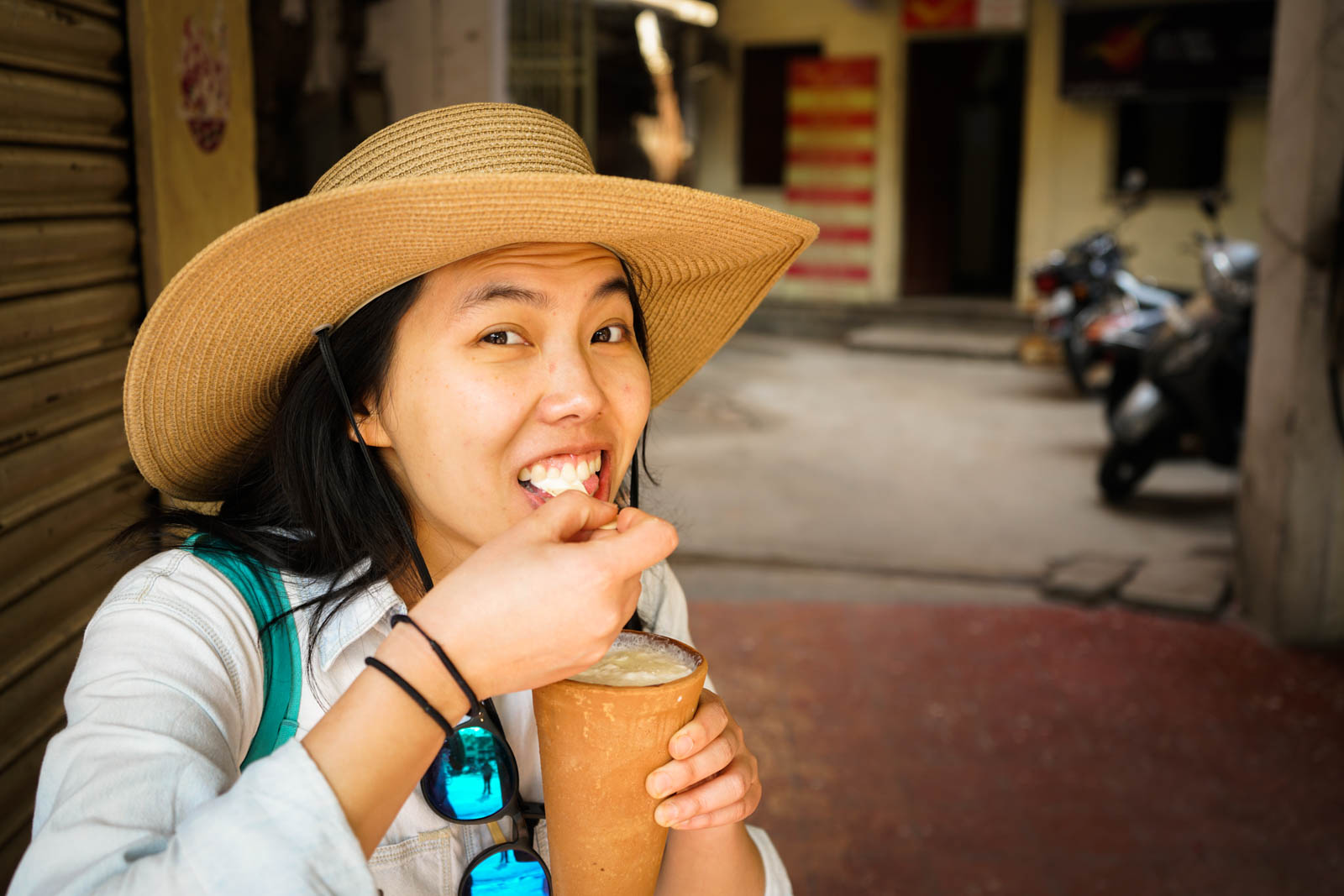 She is Tiffany’s former roommate. She joined us for two weeks in India. Together we visited five cities in and around the northern state of Rajasthan. From the beginning Priscilla indicated that her two priorities in India were to see the Taj Mahal and visit the desert. But really, she just talked about wanting to ride a camel in the desert. Unfortunately for her, our initial plan for the desert city of Jaisalmer to be our first stop out of Delhi fell through, so we had to wait until the end of the trip to visit Jaisalmer.

Jaisalmer, like most every Rajasthan tourist city, is home to an old fort. When we first arrived in Jaisalmer, we wandered down the narrow streets, looked at some awesome havelis, and had no patience for touts or attempts to rip us off.

But on the second day, we left for our camel safari! There was some panic when our debit card stopped working at ATMs, but once that kind of cleared up we were on our way in the back of a jeep to the middle of a desert. After about an hour in the car, we were unceremoniously dropped off on the side of the road where, lo and behold, there were three camels waiting for us! Priscilla wasted no time in beginning her big day by volunteering to mount her camel first. 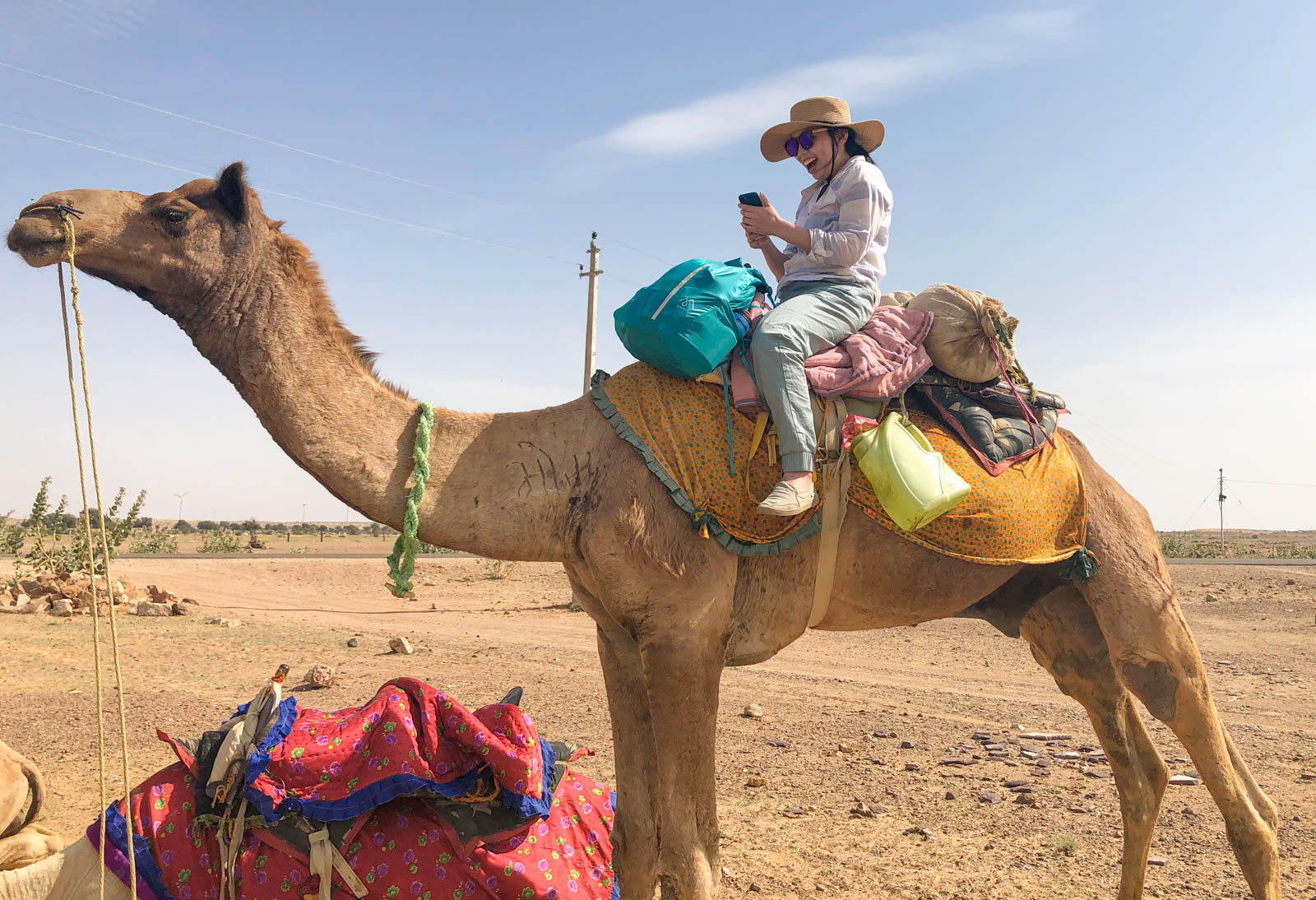 Once Tiffany and Brian boarded their steeds we were up (and we mean UP, camels are TALL) and at ‘em. 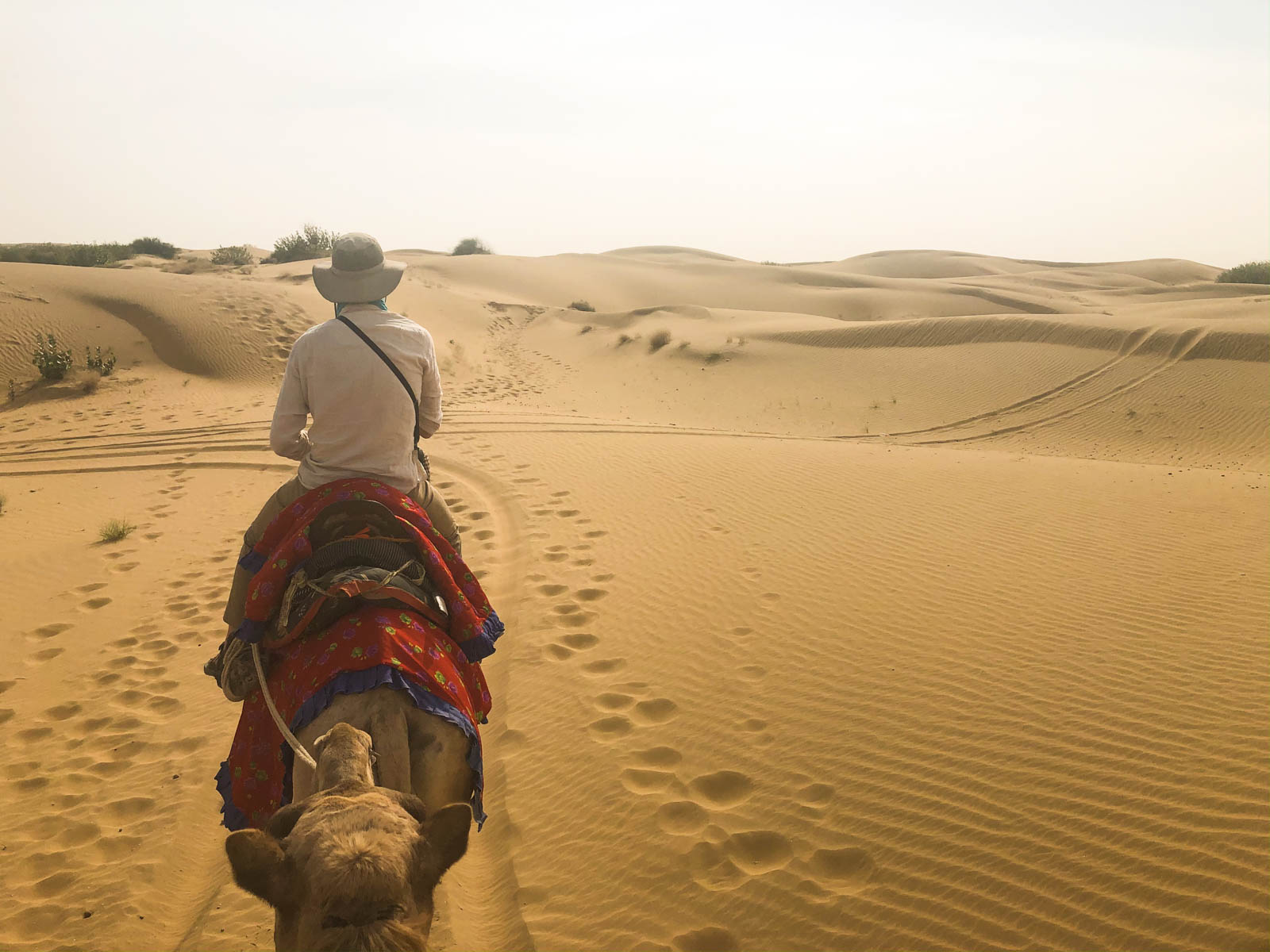 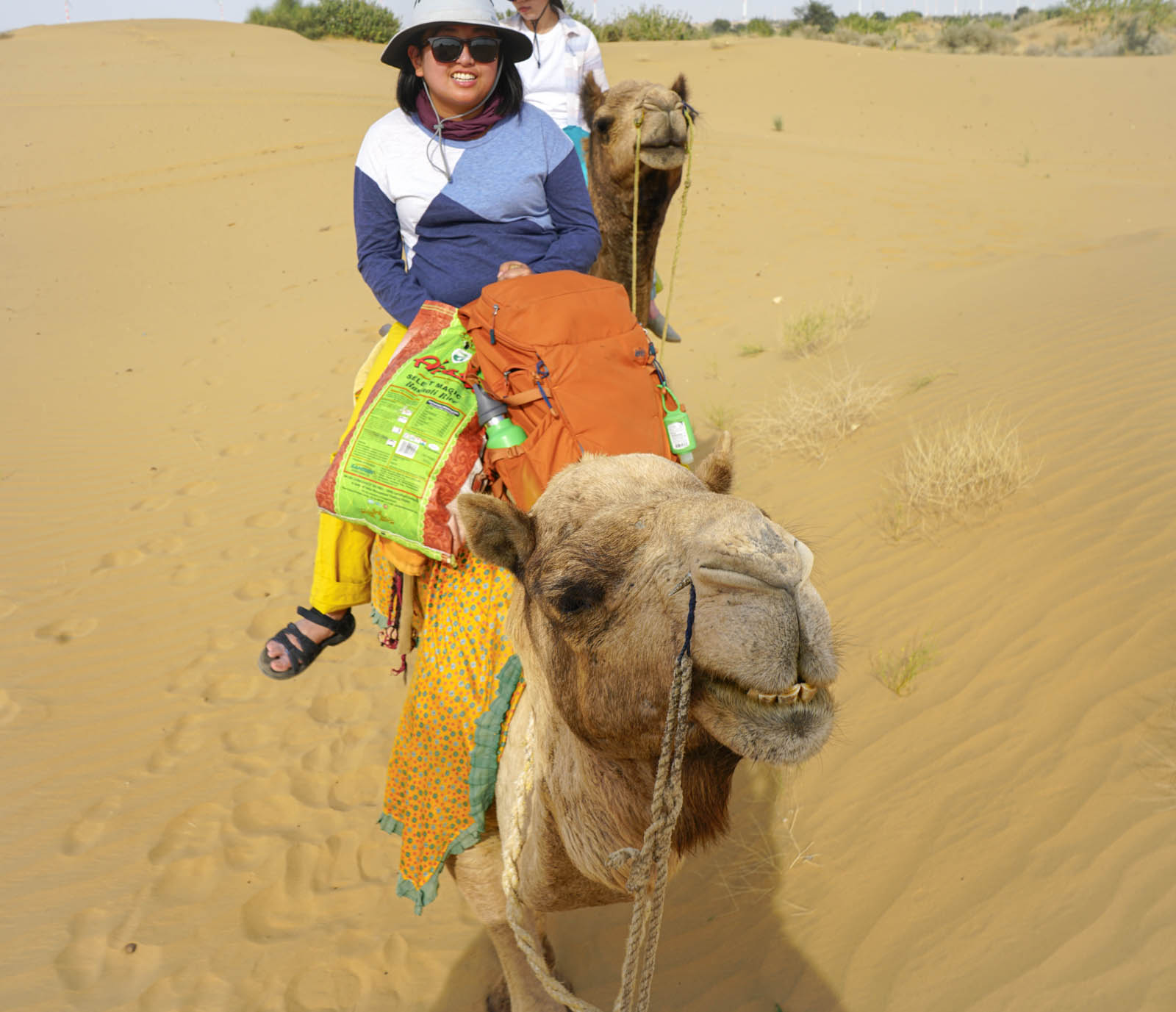 The first 30 minutes were quite exciting, since we were on camels, but scenery-wise very boring as we were just trying to get past a small village to the sand dunes. We did, however, learn that our camels’ names were Raj (Brian’s camel), Rocket (Tiffany’s camel), and Michael Jackson (Priscilla’s camel). How amazing is that?! Michael Jackson didn’t like to stay in line and often tried to overtake Rocket or at least say hi to Tiffany. 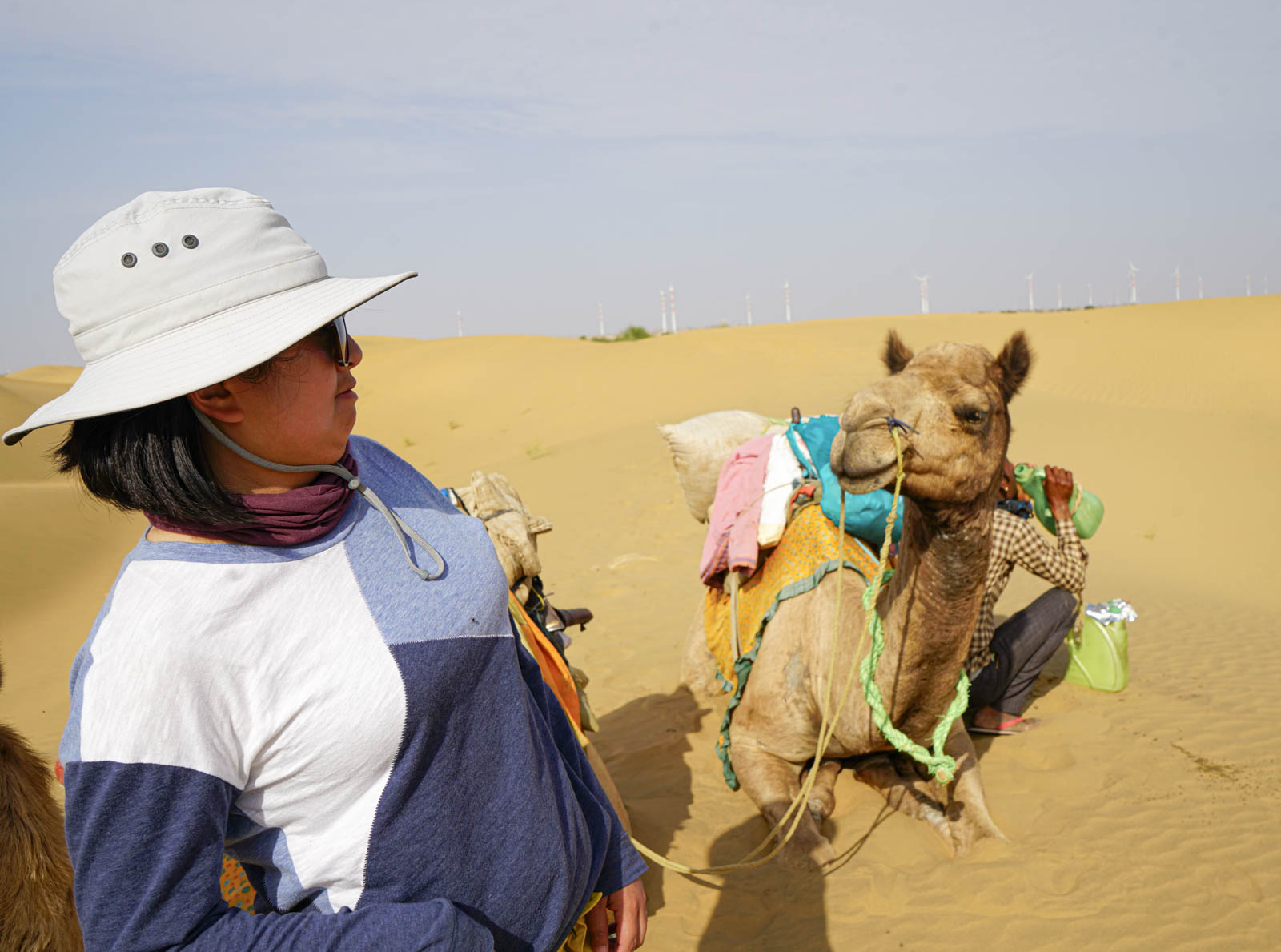 Eventually we made it to some sand dunes, which, though not endless, were every bit what you imagine. After getting to the middle of the sand dunes, we got off the camels to take some photos and explore a little. 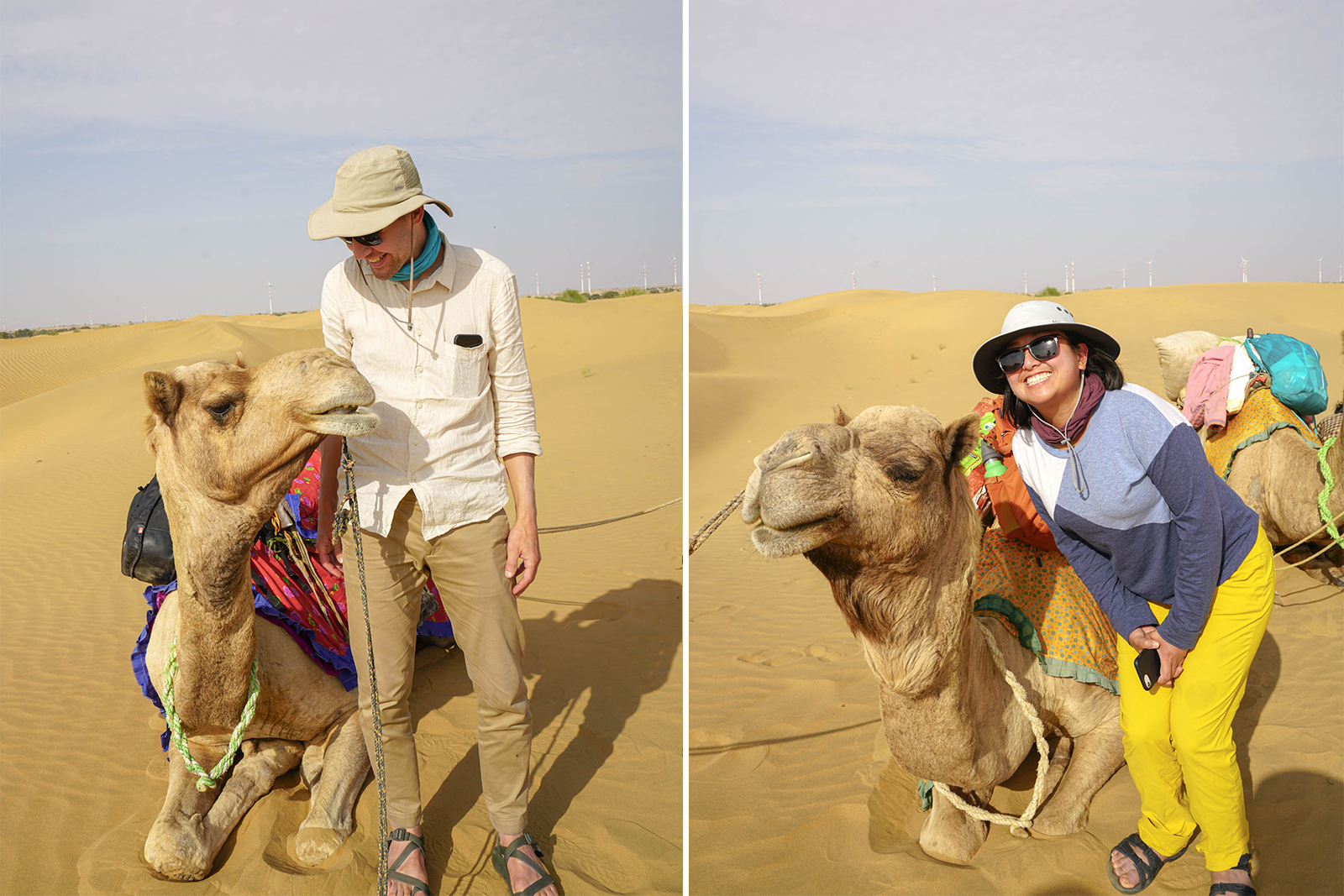 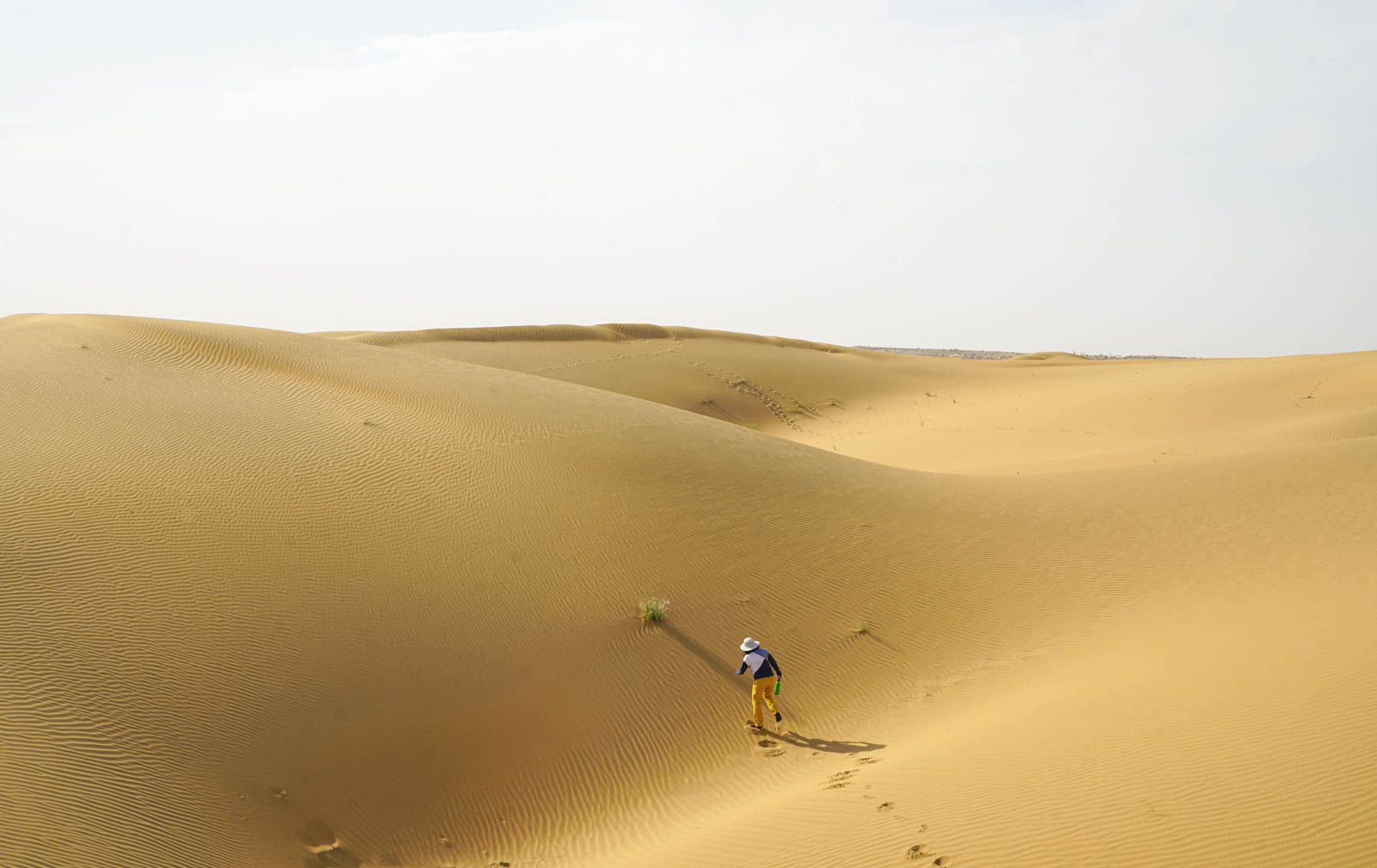 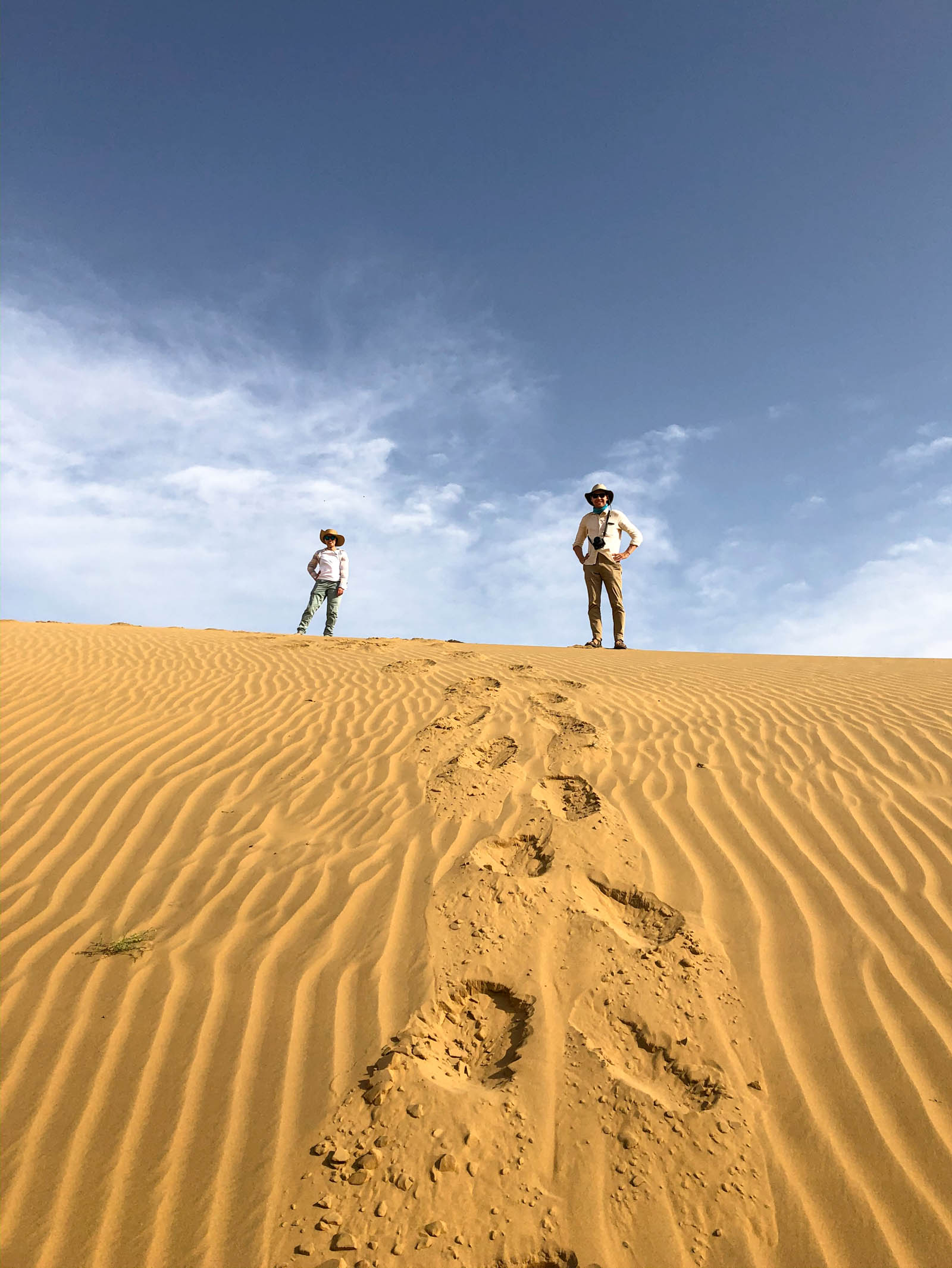 We remounted and rode for another 45 minutes or so before reaching our campsite for the night. Here, Brian and Tiffany chilled and marveled at the soft fine sand and the lack of horns honking. Meanwhile, Priscilla checked another item off of her bucket list by learning how to make chai from our camel safari guide. We also met up with a pair of European travelers who had started their camel safari earlier in the day.

The evening consisted of a meal made from scratch on an open flame, trading stories with the Europeans over a campfire, and rolling down sand dunes in the pitch black of night before getting tucked into our beds by our guides.

In the morning, we learned that Brian had spent much of the night yelling at some stray dogs that were whining near our campground. We had a lazy morning hanging out and drinking more Priscilla-made chai. After packing everything up -- no small feat, as all of the supplies had to be put on the camels, much of it doubling as our saddles -- we were off again. This time, the Europeans were a part of our caravan, so we felt very much like we were in a movie. We also marveled at the camel guides who both sat side saddle on the single lead camel. 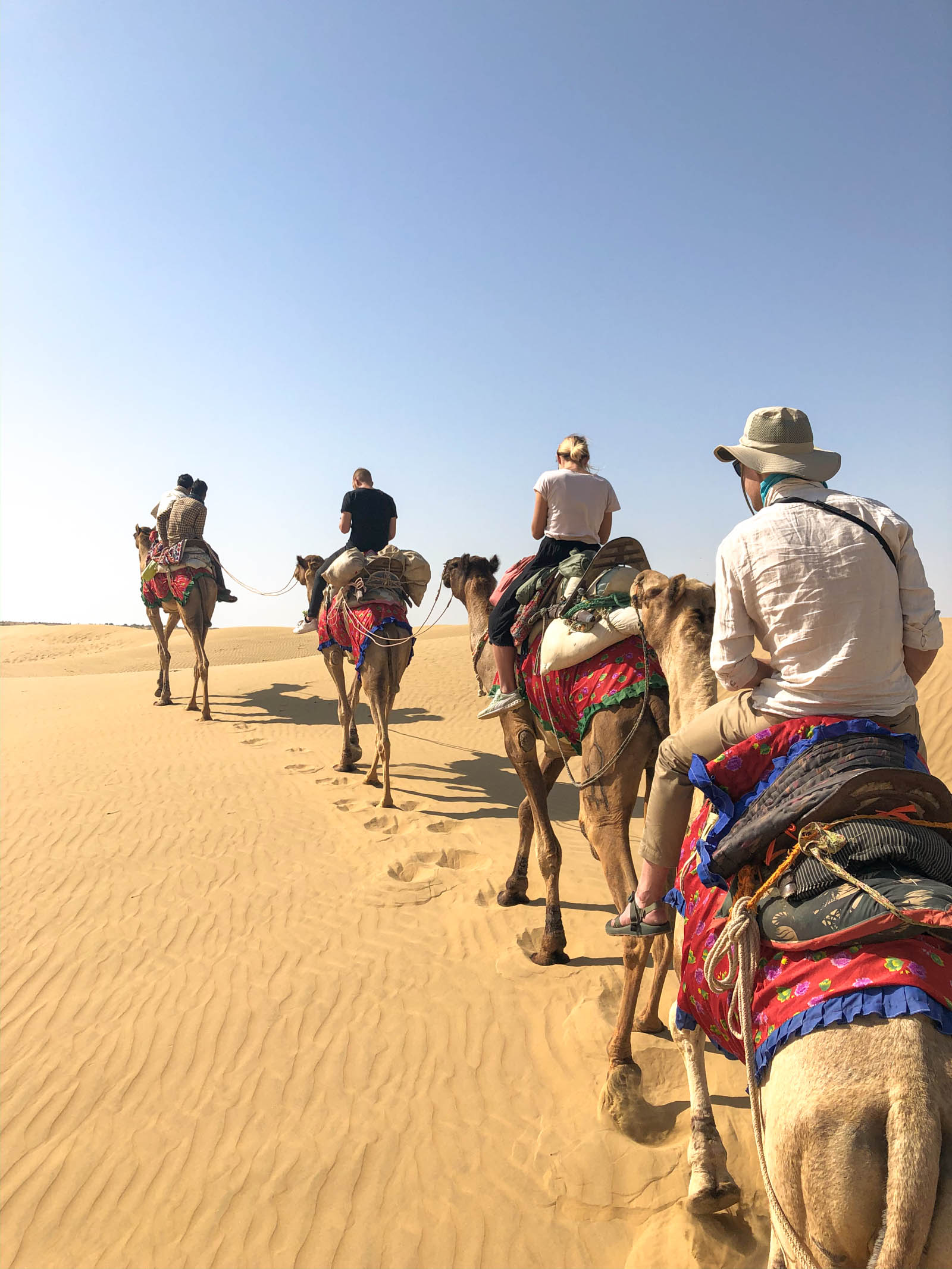 We rode around the dunes for a while before stopping at a small village. The local children repeatedly asked us to give them money or some sort of souvenir. Instead, we tried to play cricket with them. They greatly enjoyed laughing at our terrible form and technique - probably not as much as they would have enjoyed a physical gift though. 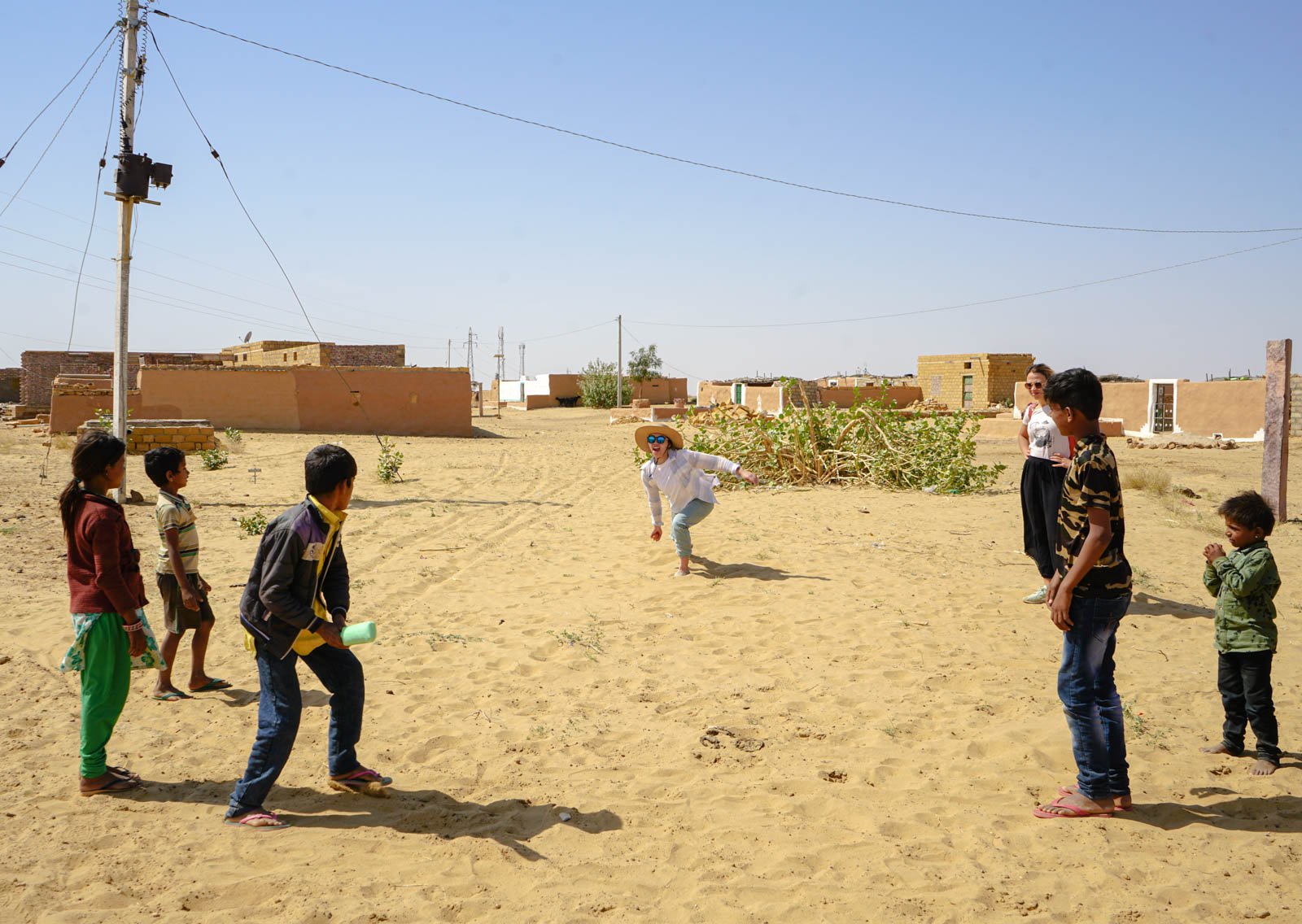 For the next leg of wandering, our guides let us handle the reins of our own camels instead of linking them together. This was a bit of an adventure as the camels did not seem too interested in following one another. The guides took turns chasing us down when we'd lose control of our camels and start listing into the wilderness. Rocket in particular seemed quite peckish and would be distracted by any delectable looking plant.

Eventually we made it to a group of trees for lunch, where Priscilla once again embraced her newfound calling as a camel guide and helped prepare chai and lunch. Post-lunch she also helped the guides round up the camels who had been wandering around in search of snackable plants. Meanwhile everyone else sat under the nice shady tree. 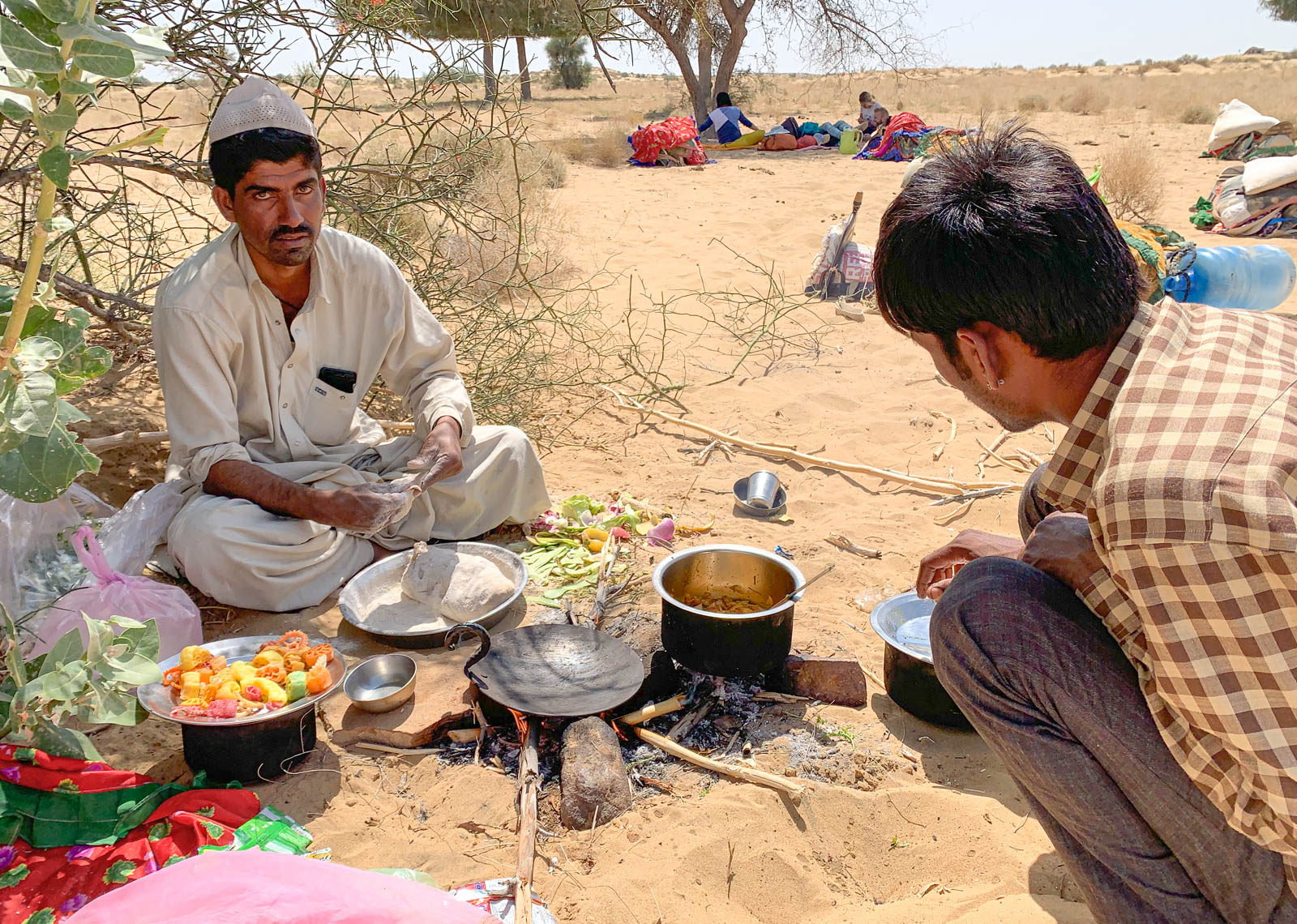 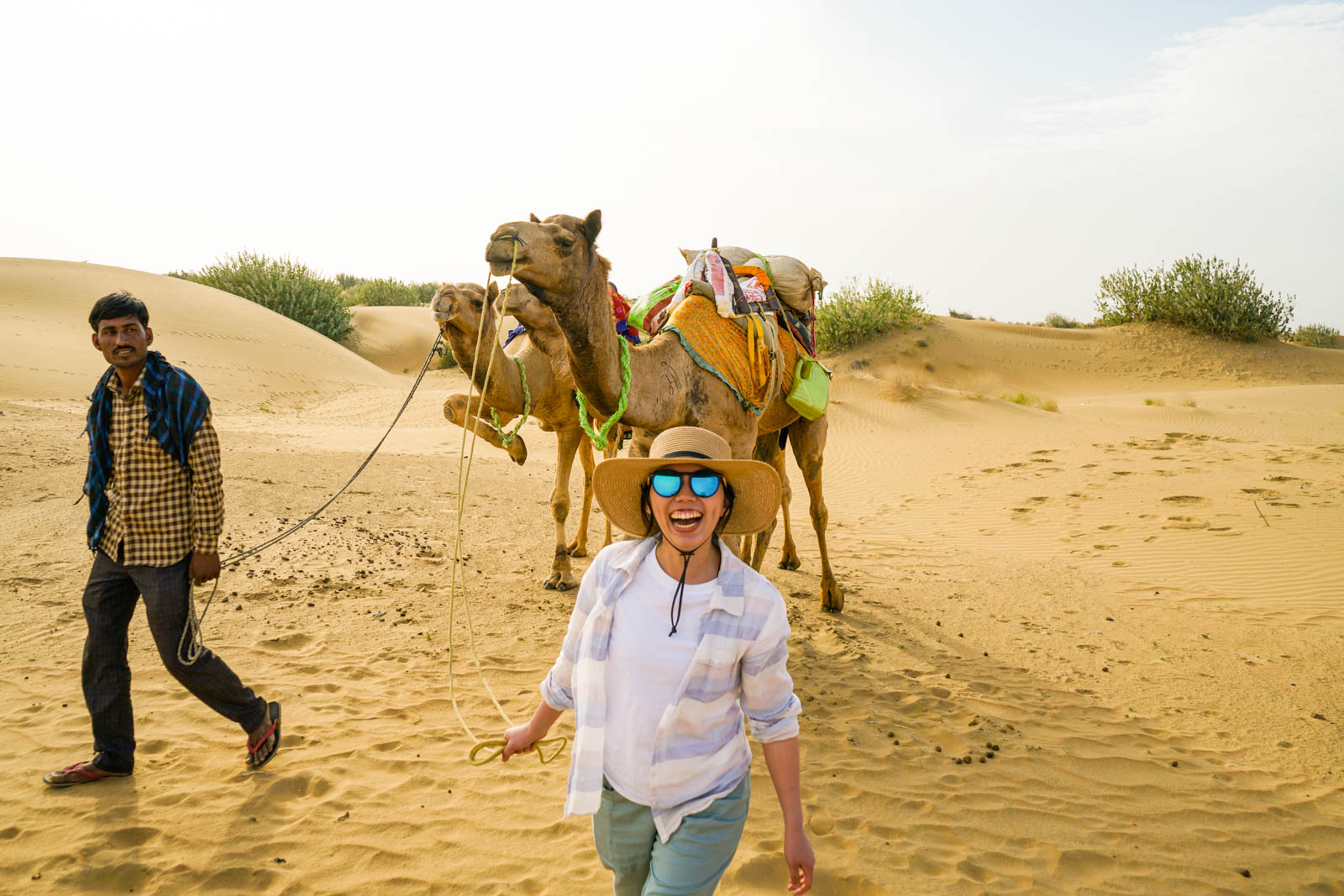 For the last bit of our desert wanderings, we were once again linked together in a caravan (neither the guides nor the tourists were very interested in having to control the camels separated again). It was really just more of the same except towards the end when the camel guides decided to up the speed and make the camels trot/run. Never have we ever experienced anything as bumpy. It was so bumpy that a large jug of water on Rocket fell off and our trot came to an abrupt stop.

The end of our camel safari was a little unceremonious as the next tourists were already waiting at the pick up/drop off spot for their safari. But we had an amazing time and loved the chance to get away from the hustle of Indian tourism and urban life. 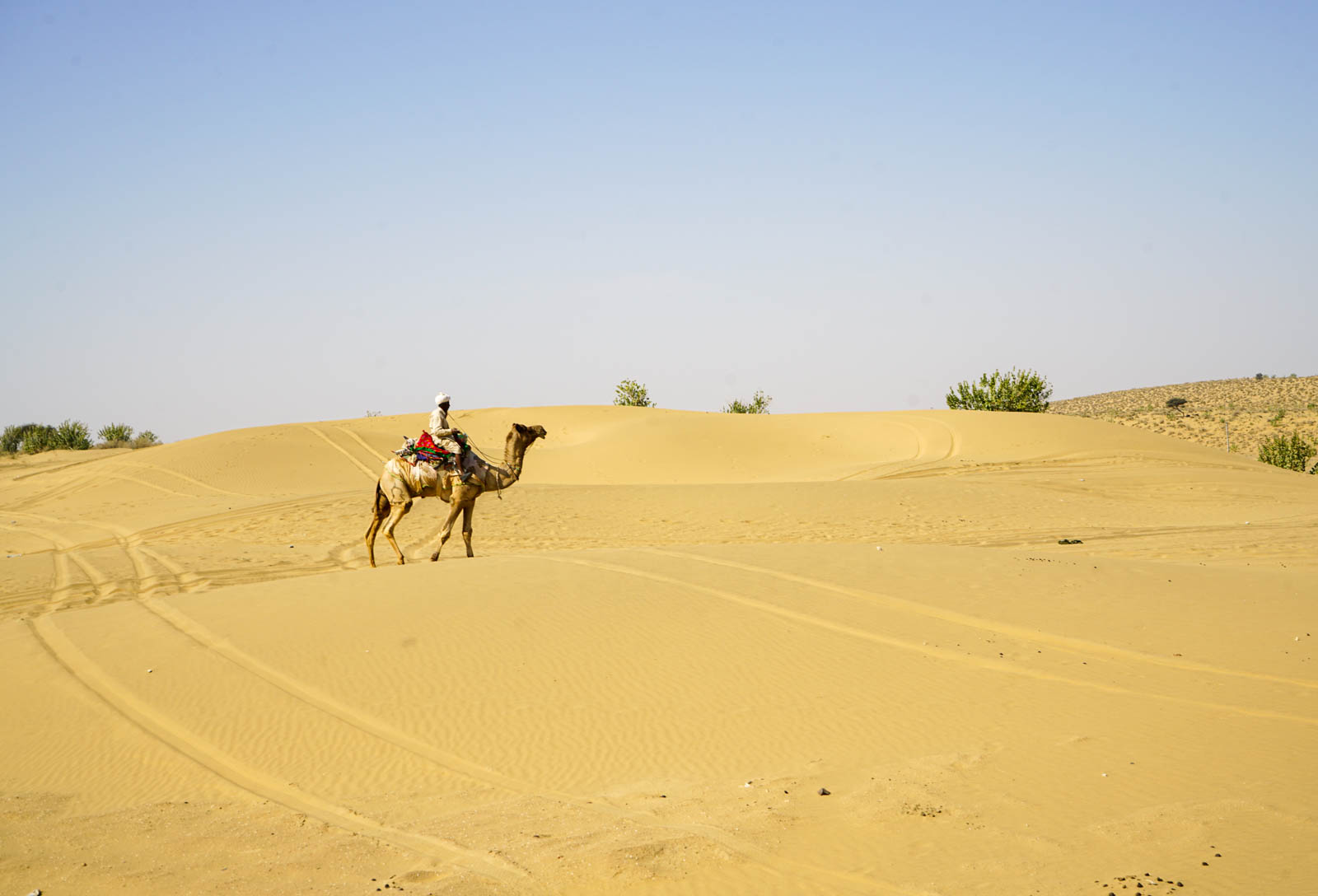 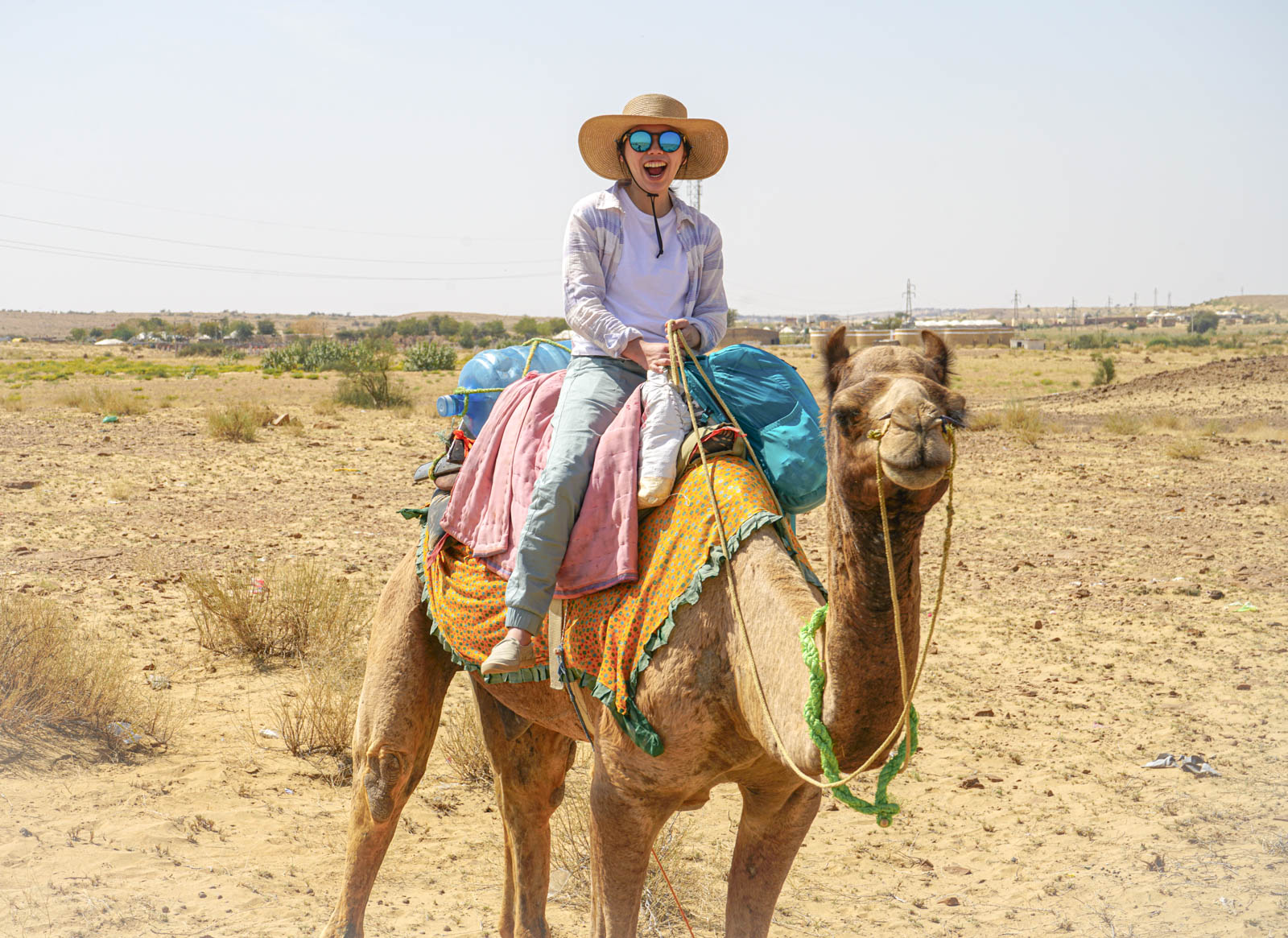