Tierra Santa is a Christian theme park in Buenos Aires, complete with costumed cast members, live dancing, and animatronic shows depicting famous scenes from the Bible. Once we heard about this place, it wasn’t a question of whether we’d go, but when.

Walking through Tierra Santa is a journey through Old Jerusalem and 30-ish attractions - scenes from the Bible, largely concentrated on the life of Jesus. These attractions include four animatronic shows: The Birth of Jesus, The Last Supper, Creation, and The Resurrection.

The shows run at scheduled times throughout the day, and based on our arrival time, that’s the order we watched them in. The schedule of shows, combined with the layout of the park, makes it somewhat difficult to visit the attractions in chronological order. For example, immediately upon entering the park, the first set of attractions we encountered was a rapid fire succession through the Old Testament, with the Fall of Man, the 10 Commandments, and the Prophets, and then straight into the New Testament with the Immaculate Conception and culminating with the first animatronic show: The Birth of Jesus. You may be thinking “that’s very quick through the Old Testament” and you’d be right, but again, this park concentrates primarily on the life of Jesus, followed by the life of Mary and Pope Francis’s visit to Israel in close competition for second.

The Birth of Jesus show takes place in a large dark theater, kind of like a planetarium. It’s a fairly understated show, with animatronics mostly consisting of subtle lowing of the cattle’s heads around the manger, and the three wise men from the east kneeling before Baby Jesus, accompanied by a booming narration from Matthew’s Gospel. The show was a little underwhelming. But we were quite interested in the super-buff shepherd off to the side, who resembled a very ripped Scott Bakula, and was inexplicably smirking and seemingly disinterested in the Nativity. 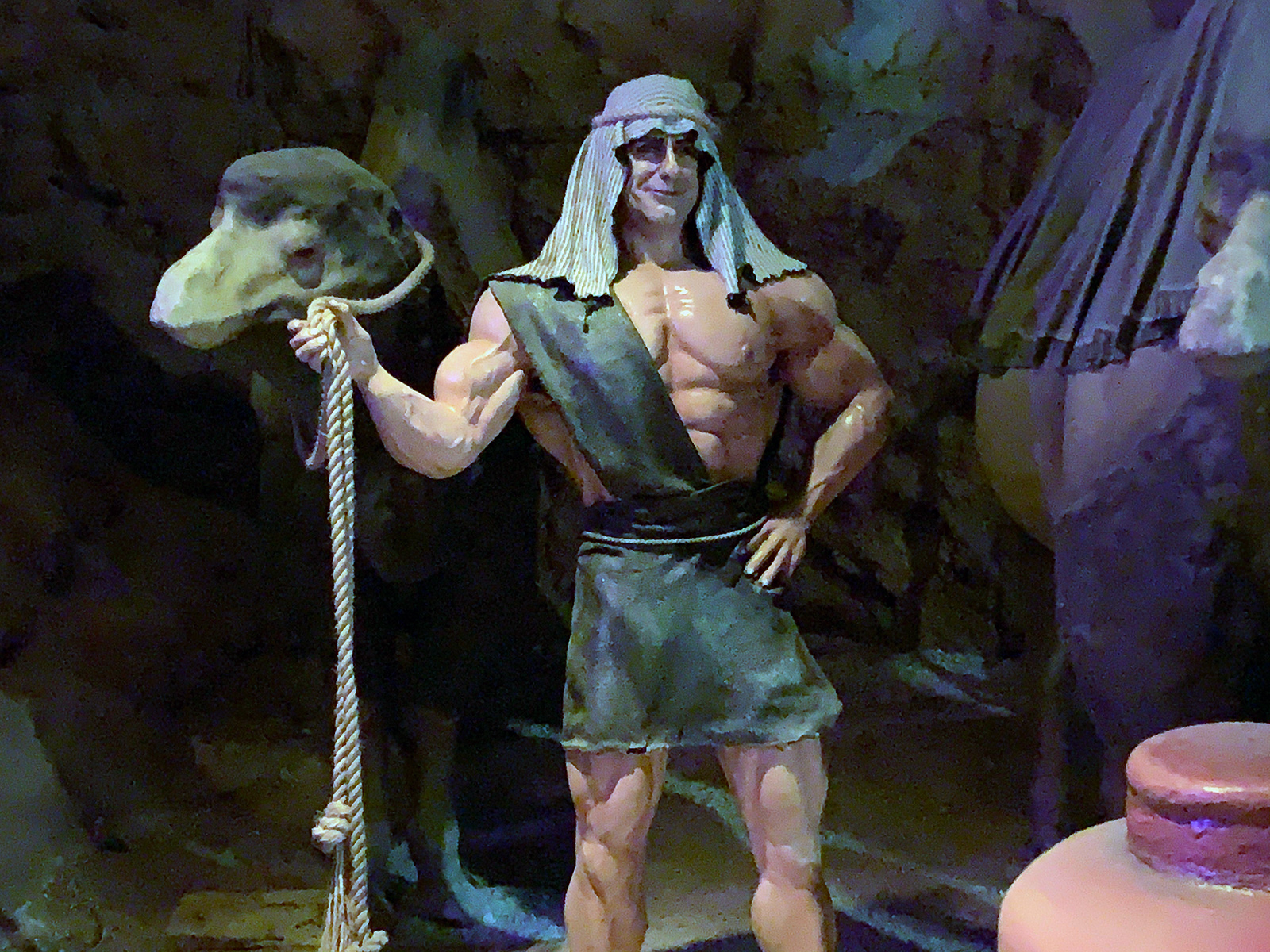 We then explored Old Jerusalem, making our way to the next scheduled show. Along the way, we avoided all interaction with cast members. Tiffany is a little creeped out by people in costumes, and literally everyone is in costume, although you occasionally might see a Roman soldier hiding in a corner checking his cell phone.

We put away our map and wandered Old Jerusalem, giving us a very nonlinear trip through the gospels. We also entered a chapel which contained an exhibit of photos from Pope Francis’s visit to Jerusalem. Pope Francis, if you recall, is Argentinian, and so an extra big deal in BsAs.

Scattered throughout the park, there are murals of recent heroes of Catholicism, like Pope John Paul II and Mother Theresa. But there was also one for Gandhi. We could not figure that one out. It just goes to show you never know what or who you’ll see in Old Jerusalem. 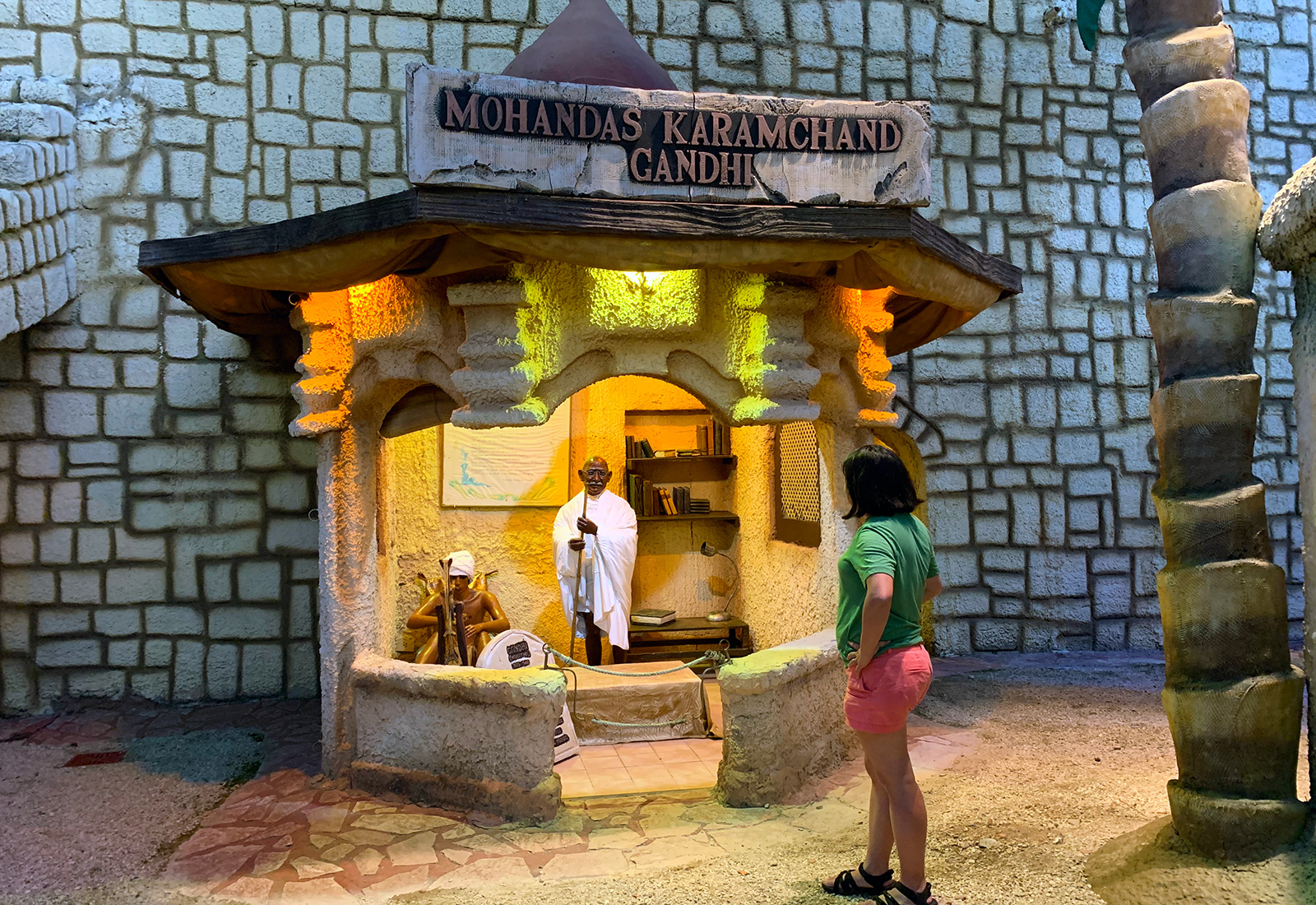 Our journey continued towards the Temple, which contained the Ark of the Covenant. We did not enter the holiest of holies. Behind the Temple was the wailing wall, with statues of modern-day Orthodox Jews wailing. 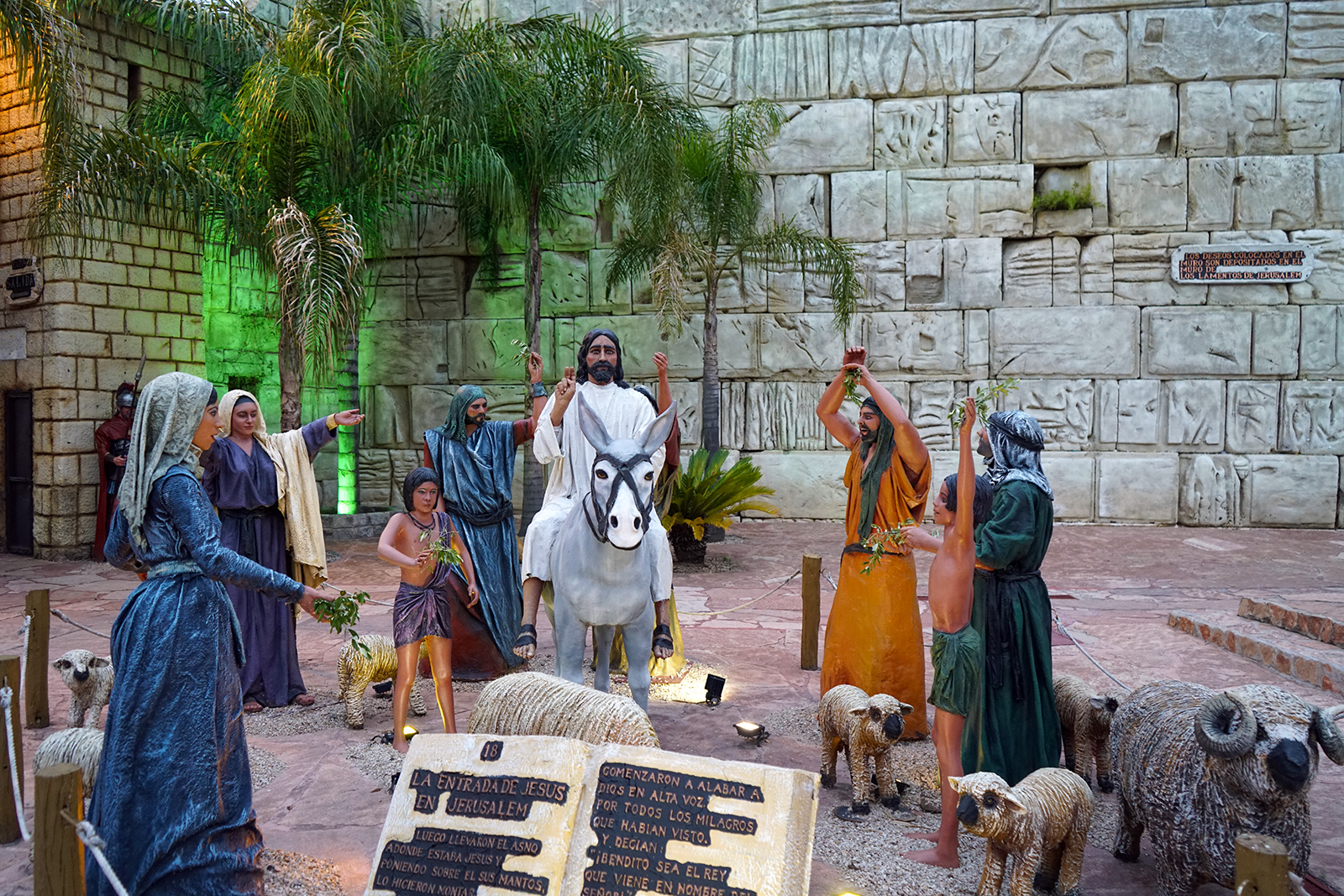 We watched from afar as a crowd was entertained by conservatively dressed belly dancers, then hurried to catch our next animatronic show, The Last Supper.

Similar to The Birth of Jesus, The Last Supper consisted of a few colored lights and some subtle animatronic movement, this time Jesus lifting the bread and wine to institute the sacrament of communion, and again accompanied by booming Spanish narration. After about 90 seconds, the show ended. Our fellow patrons either posed for selfies in front of the characters or left the theater, but we remained in our seats, confused and a little disappointed. 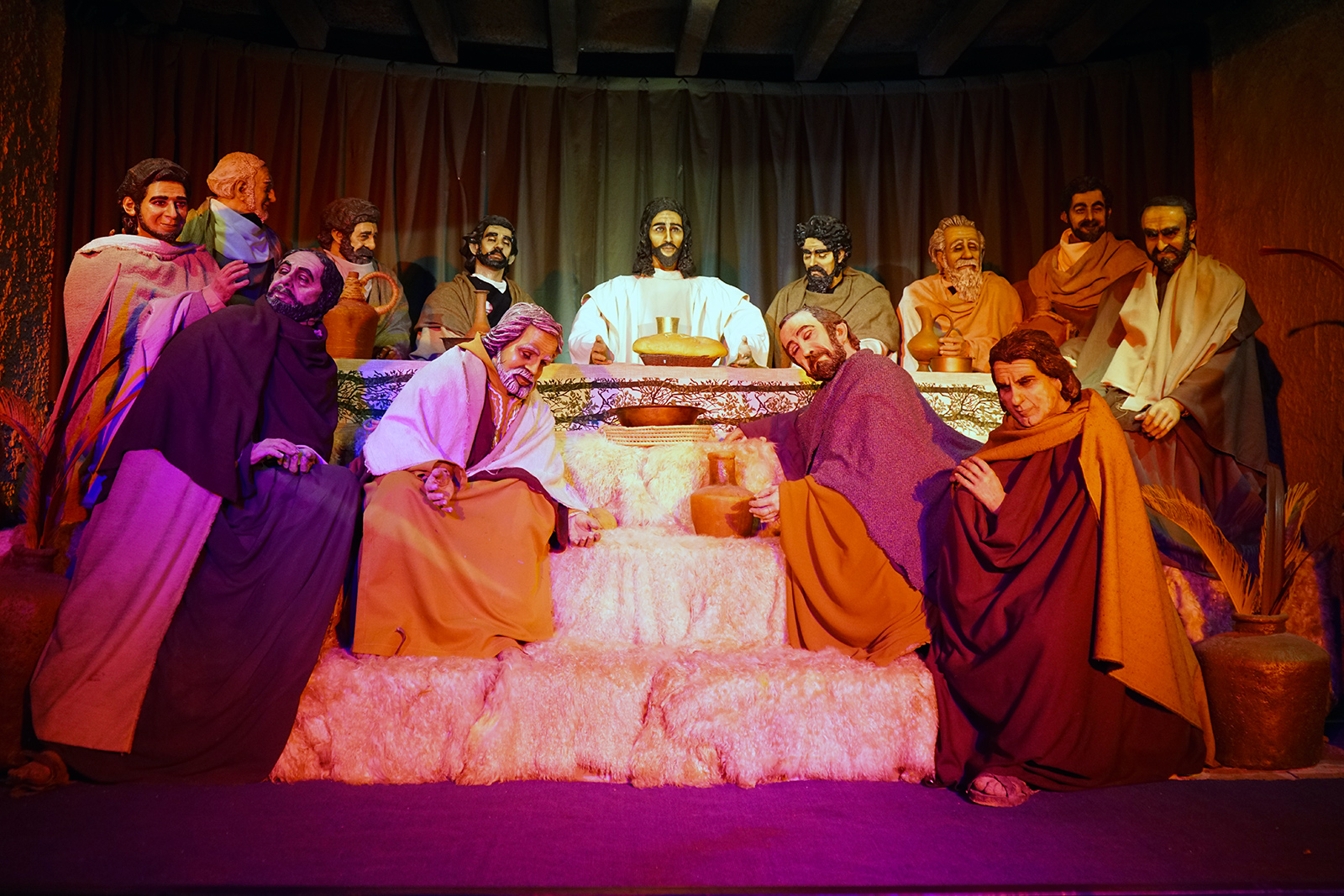 At this point, we started feeling somewhat guilty about enjoying the park ironically. These shows are a far cry from Disney animatronics, even Carousel of Progress (which is like peak ironic enjoyment). Tiffany has also seen a far more over-the-top Biblical kitsch at Orlando’s Holy Land Experience, and Tierra Santa operates on a fraction of the budget, so we decided to cut them a little slack.

After watching The Last Supper at the far end of the park, we raced back towards the front of the park to catch the next showing of Creation, passing by where we’d shortly return to catch The Resurrection. We definitely got our steps in pacing the surprisingly large park.

We arrived late for the Creation show, and the next one was scheduled for an hour later. At this point, we decided to skip it and wait for The Resurrection, which was only 20 minutes later, and to console ourselves by taking some photos at Noah’s ark. But then miraculously, a Roman guard opened the door and called us in. And boy, are we glad he did.

The Creation is by far the most spectacular show. Sure, it was the same sort of combination of colored lights and subtly moving animatronic creatures, but Tierra Santa went all in on this one. Each of the days of creation is depicted, accompanied by not only the signature booming Spanish narration, but immersive audio effects like thunder (when the earth was formed), crashing waves (when the seas were formed), and the many sounds of animals in the jungle (Eden, of course). We gazed in wonder as Eden became populated with animatronic animals, each one’s appearance more magnificent than those before - a hippo, a lion, a giraffe, an elephant, and a gorilla - and each one with a signature move and sound effect.

We also noticed for the first time that there were other people who seemed to find this as amusing as we did.

Even with all of the animals, the highlight was still Adam and Eve. Accompanied by O Fortuna, Adam and Eve rise from beneath the stage and begin spinning in slow circles. Either these animatronic Adam and Eve were post-Fall, or (gasp) the show was not Biblically accurate, as they were carefully adorned with leaves in delicate places. Eve also had an awful messy blonde wig with lights strewn throughout the hair. It was not a good look. 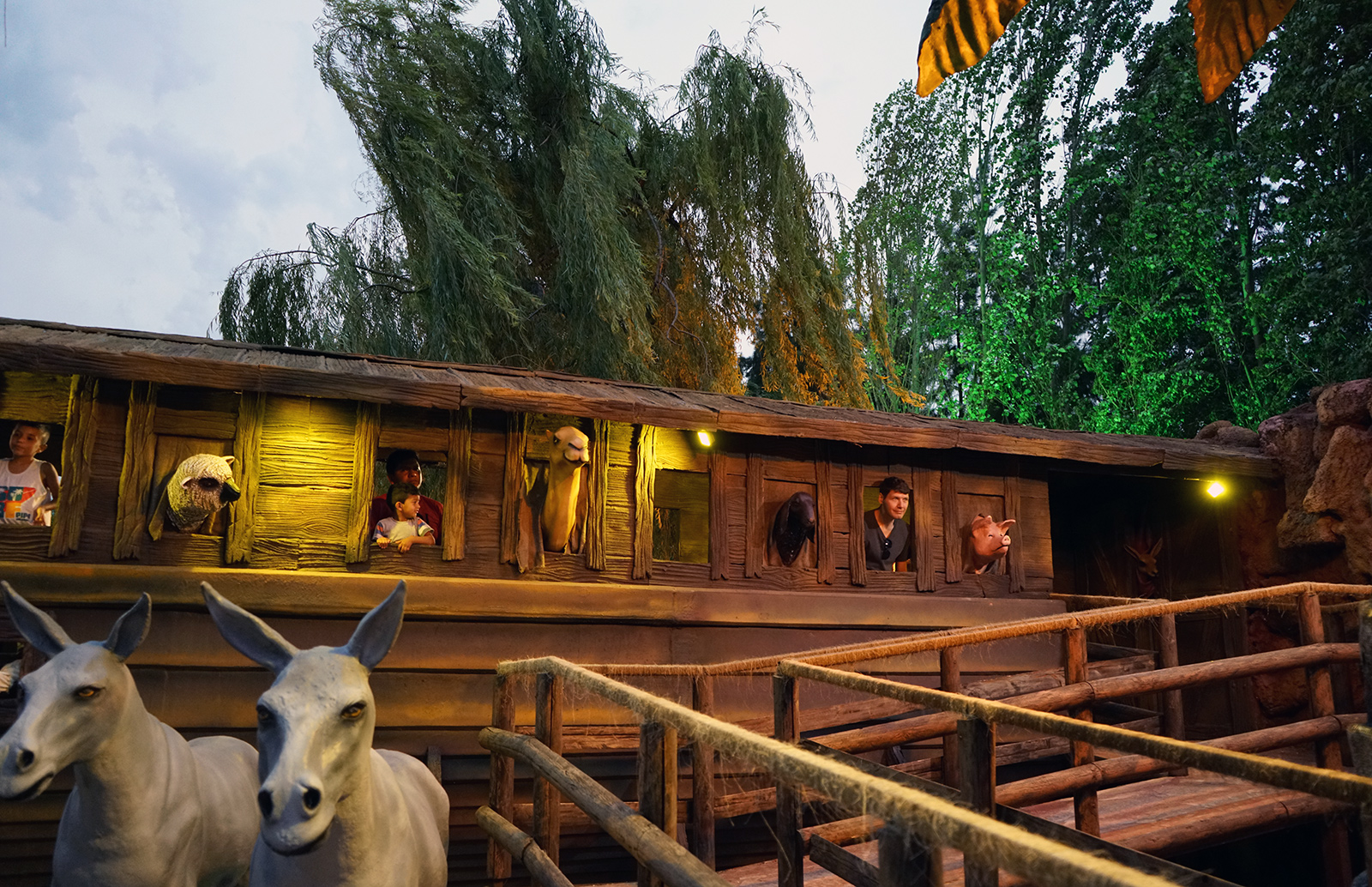 Afterwards, we returned to the center amphitheater to watch the Resurrection. Nothing warns you that the show is about to begin, except perhaps a gasp or two, as you realize a 40-foot tall statue of Jesus is rising out of the rocky hillside next to Golgotha, and suddenly Handel’s Hallelujah Chorus blasts out of nearby speakers. The music is loud. Once risen, Jesus slowly begins turning side to side, slowly, hands raised in a triumphant benediction not unlike Touchdown Jesus at Notre Dame. If you’re at all familiar with the Bible, you know that this isn’t even remotely accurate. But it’s still awesome. 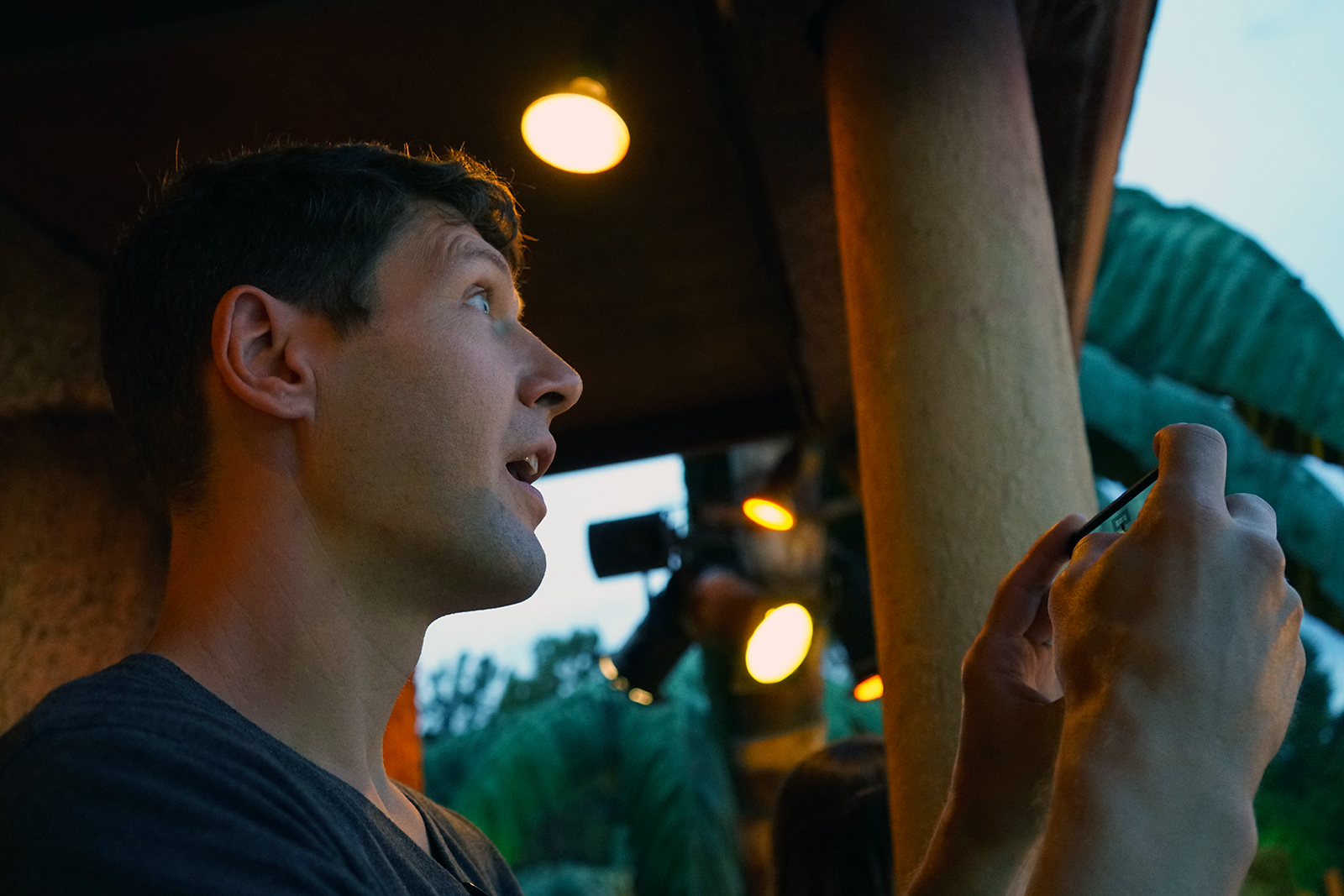 The sun was setting and light rain began to fall, so we decided to bid farewell to Tierra Santa.

Would we recommend visiting? Probably not, in addition to being kind of pitiful it was more expensive than we expected. But we had an amazing time, particularly enjoying the Creation and Resurrection shows. Our appetite for Christian kitsch was sated until we finally go to Orlando’s Holy Land Experience.