Some Cool Things We Did in Zanzibar

Stone Town is one of the main attractions of visiting Zanzibar, a place that feels lost in time, along the coast of the Indian Ocean, with narrow streets winding through stone buildings that are just not quite derelict, but not quite polished like you’ll find in Cartagena. There’s an old world charm to the place, and it’s a great spot of aimless walking (at least before midday temperatures climb into the upper 90s).

Wandering through Stone Town, you’re bound to see street food vendors grilling skewers of meat, and hawkers selling everything from spices to mainland or oceanic excursions to artwork to kitschy tourist t-shirts printed with the ubiquitous “hakuna matata” motto. Frequently, you’ll hear a honk behind you as a scooter wants to pass, and occasionally a passing stranger will call out “mzungu,” meaning “white person,” and depending on the time of day, maybe a Muslim call to prayer will ring out from a nearby mosque. 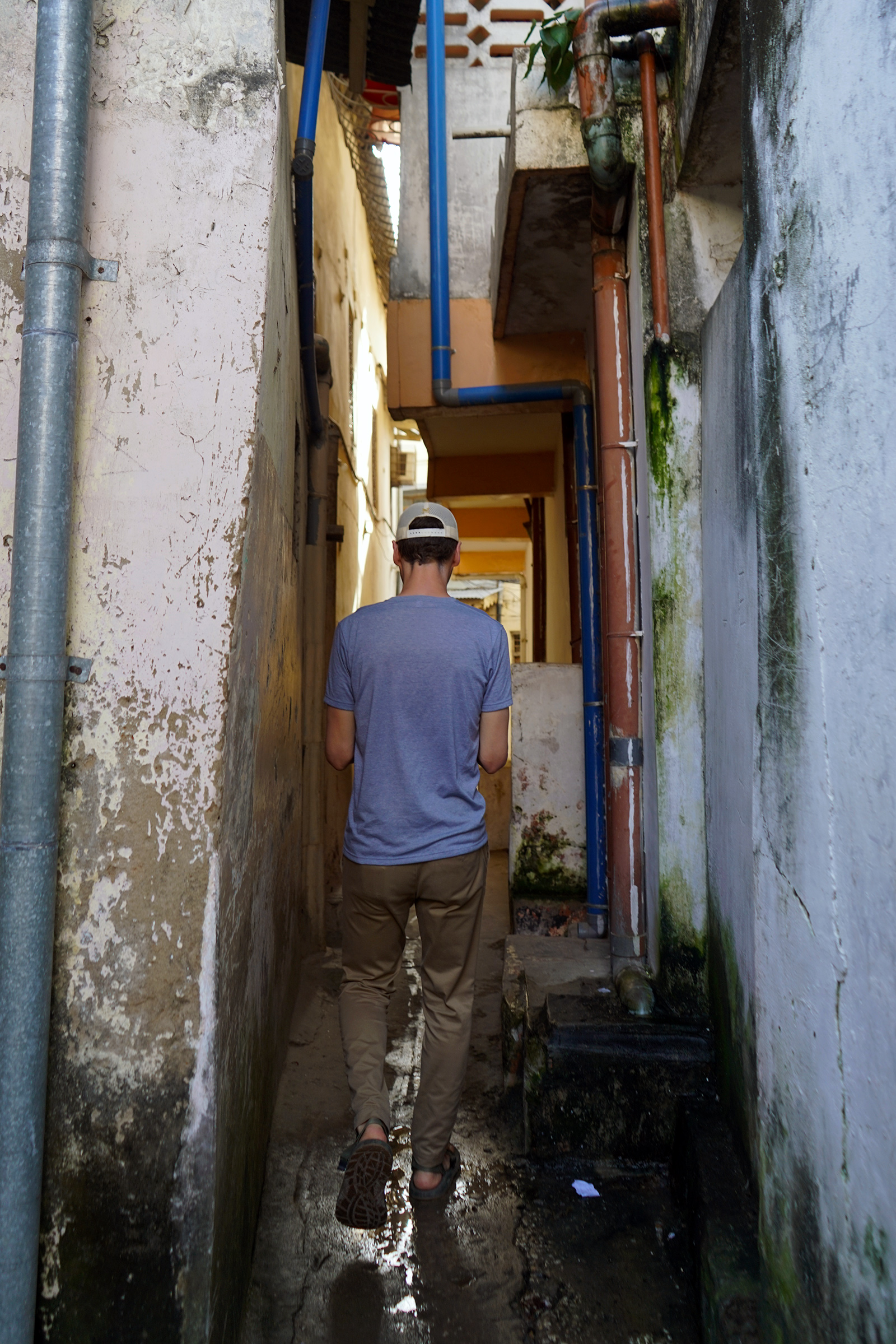 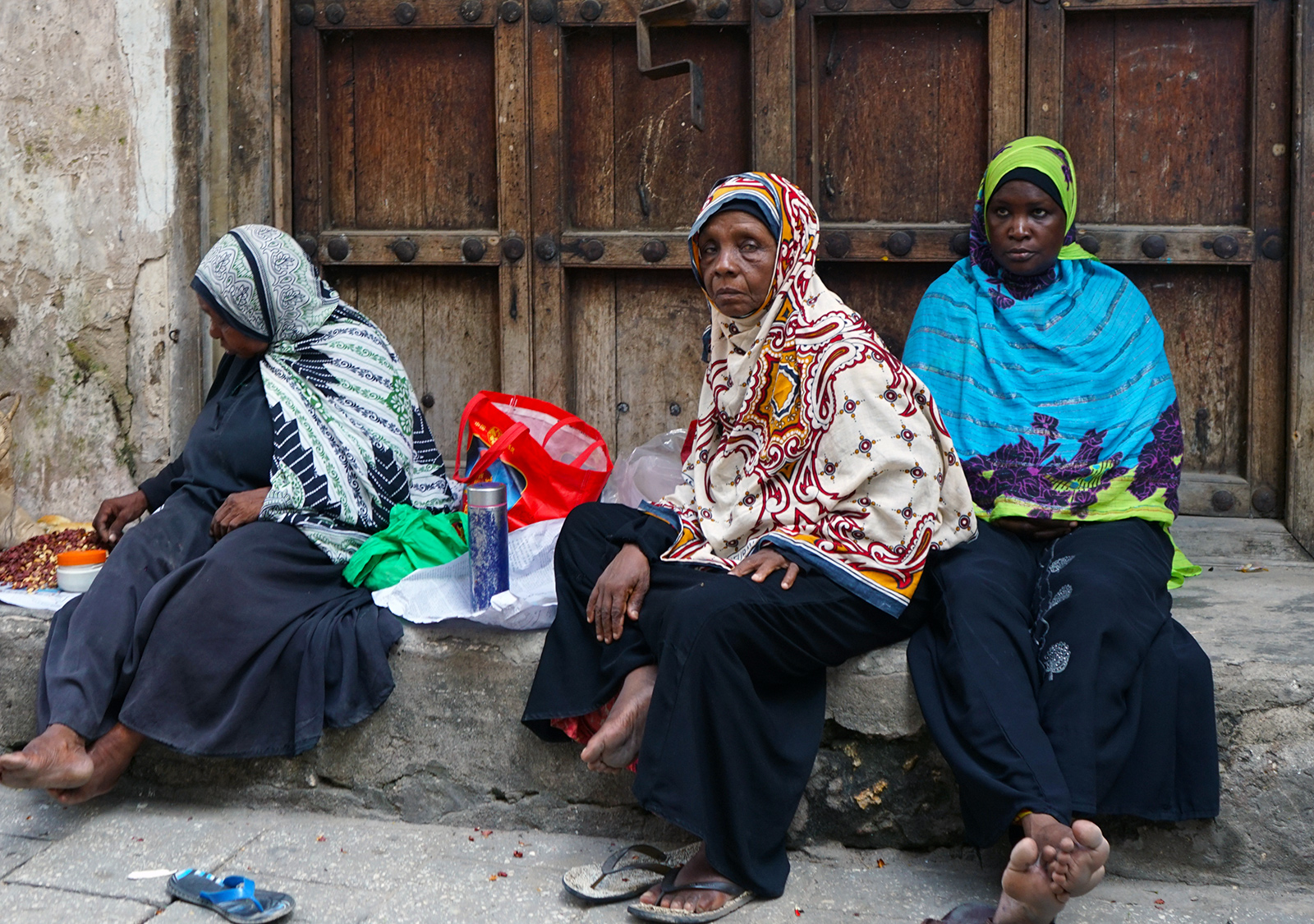 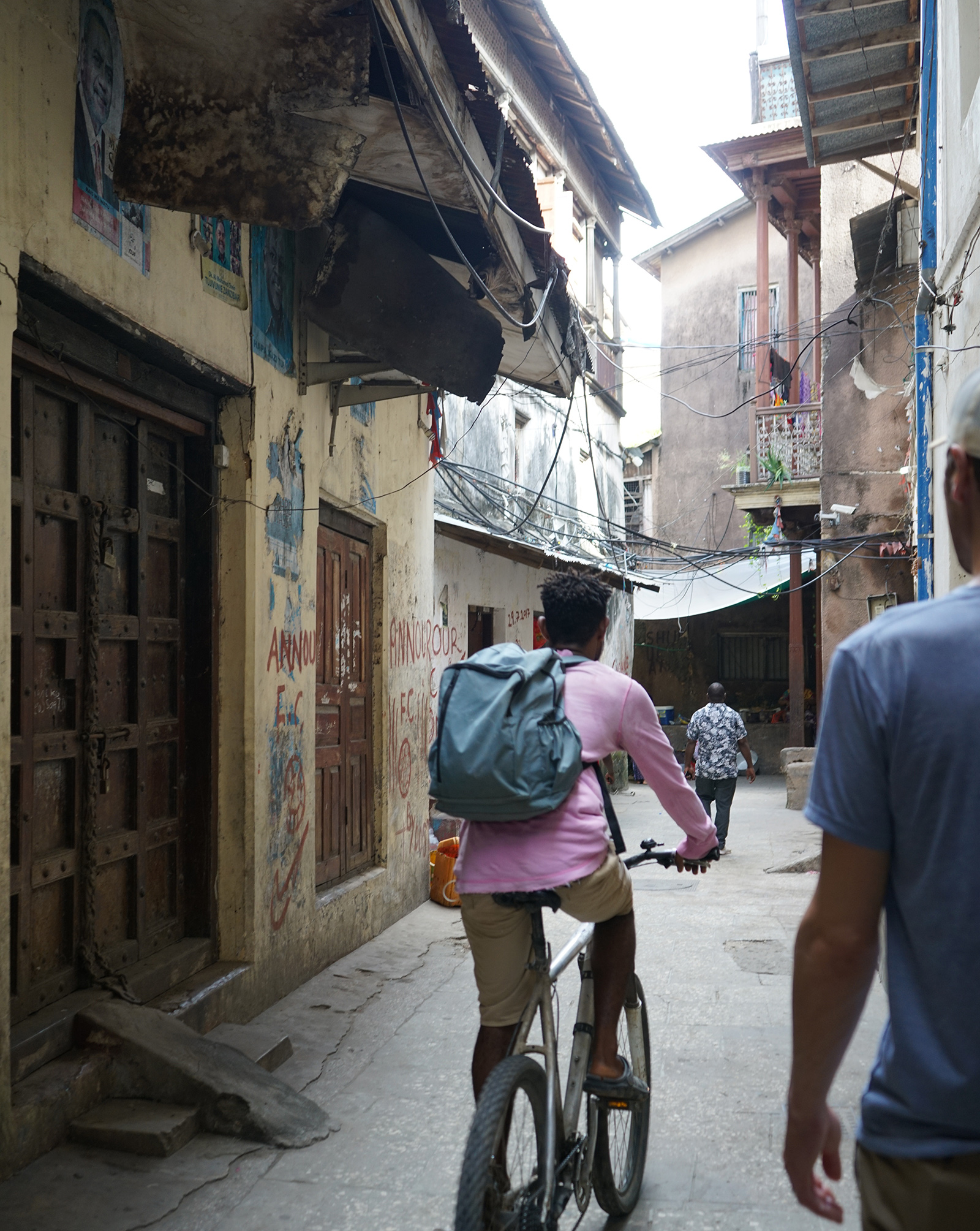 There’s also a super bustling spice and fruit market in town. Brace yourself for the hawkers and try not to cough from all the spices. 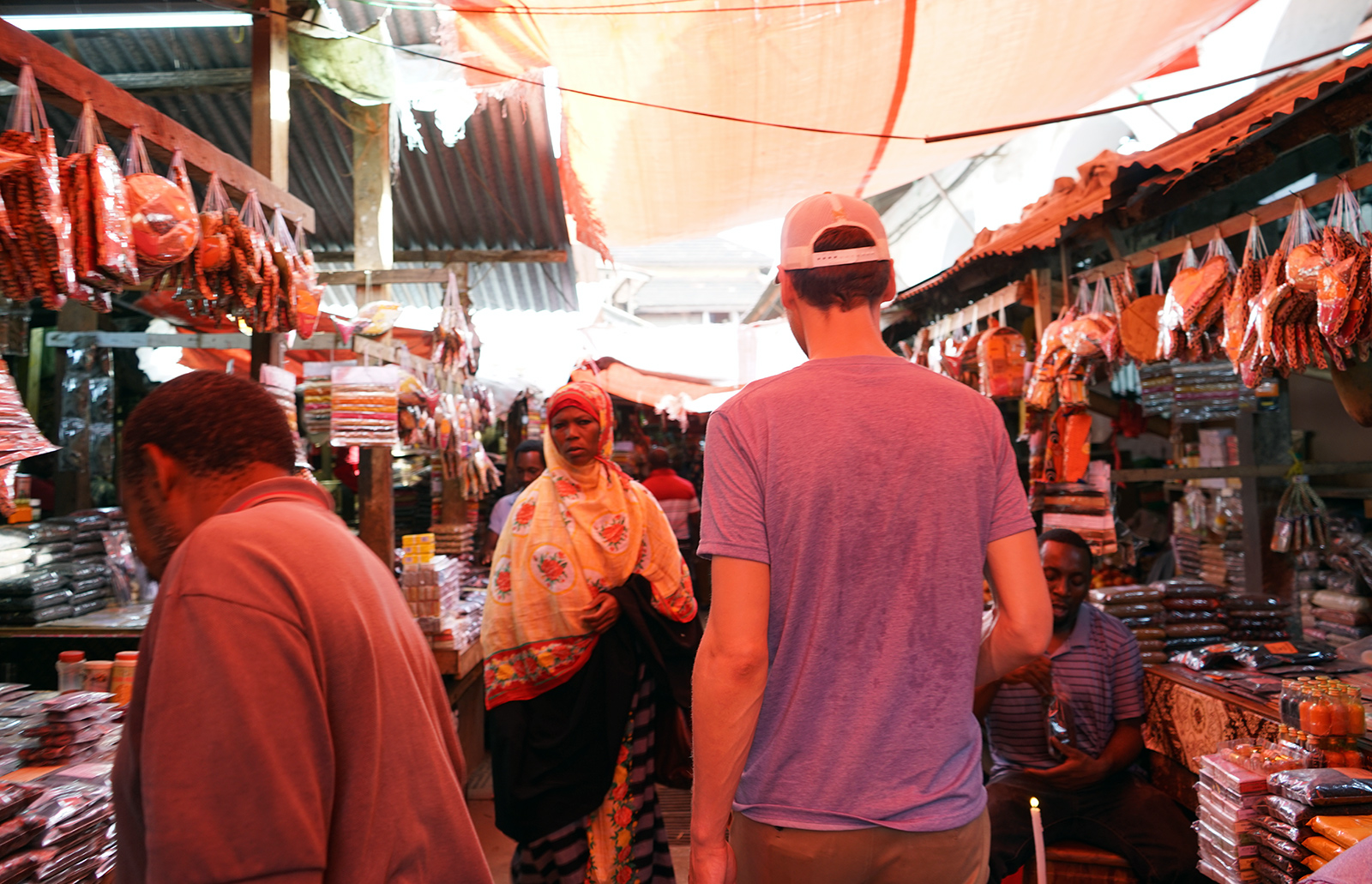 Zanzibar is famous for ornate doors, which you can see throughout Stone Town. You just have to take a casual stroll. 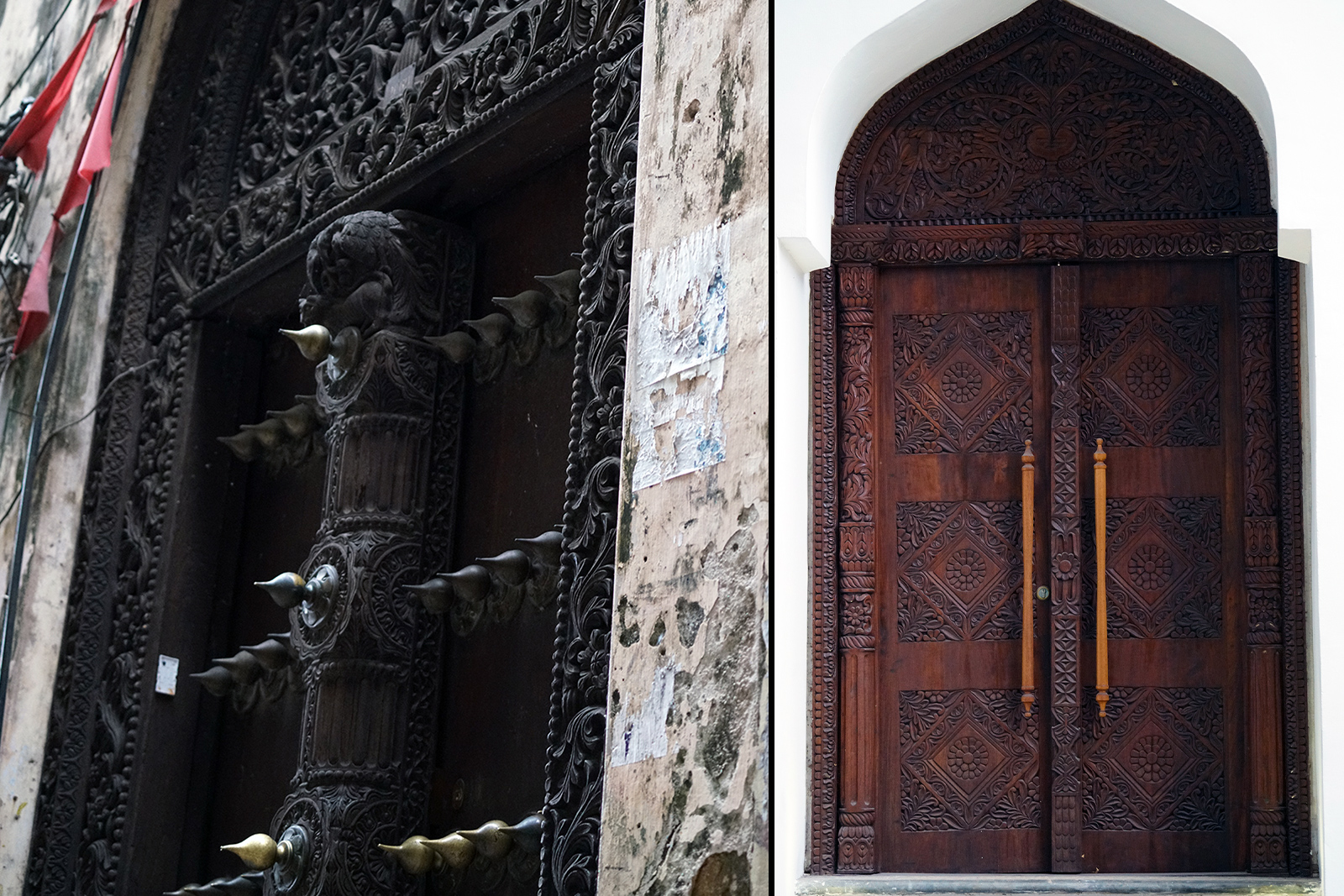 Zanzibar is also famous for its night market along the waterfront.

We enjoyed visiting the night market, taking in the sights, and trying the food, but overall, the food was pretty meh. We expected glorious, revelatory spices, but most everything was bland. 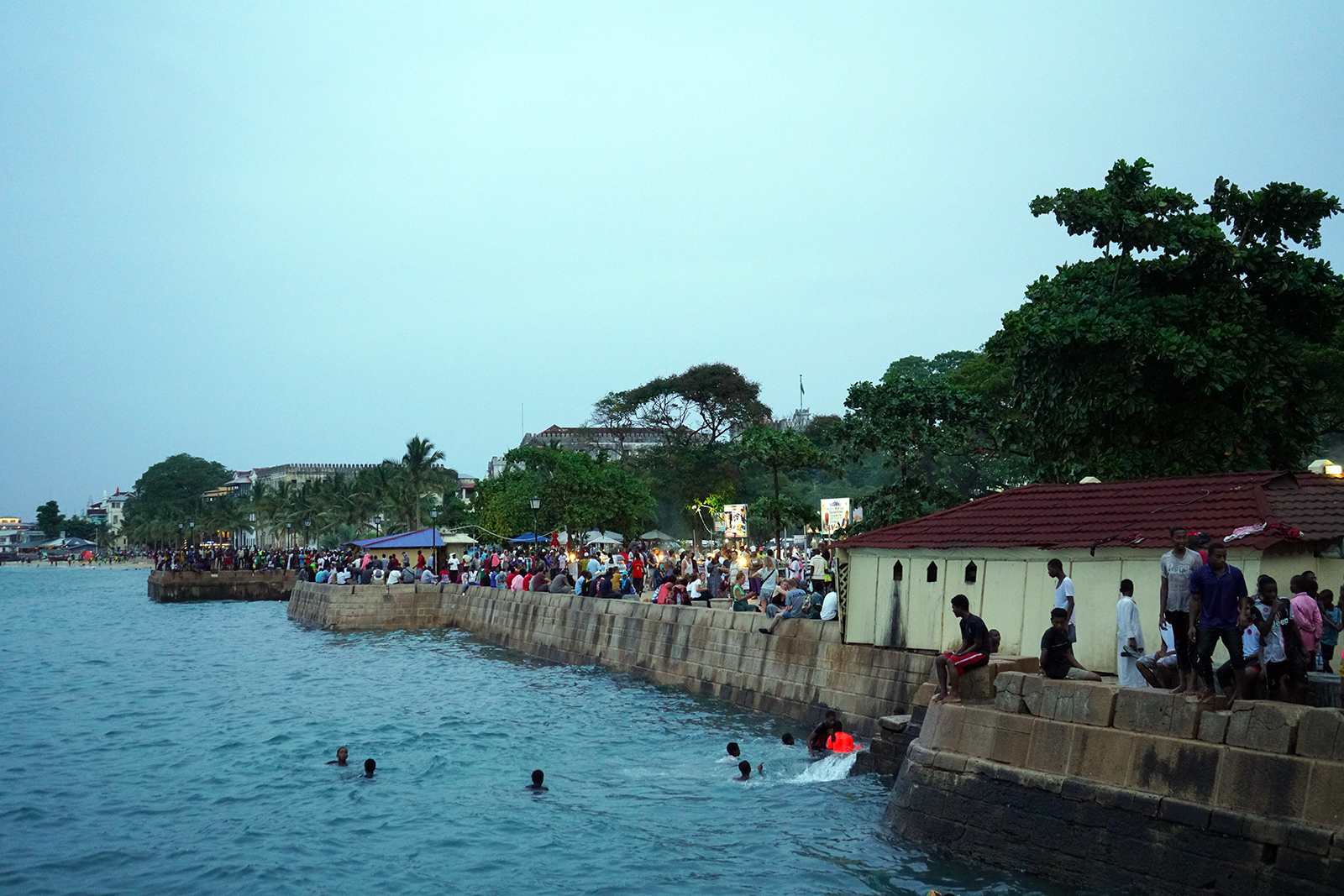 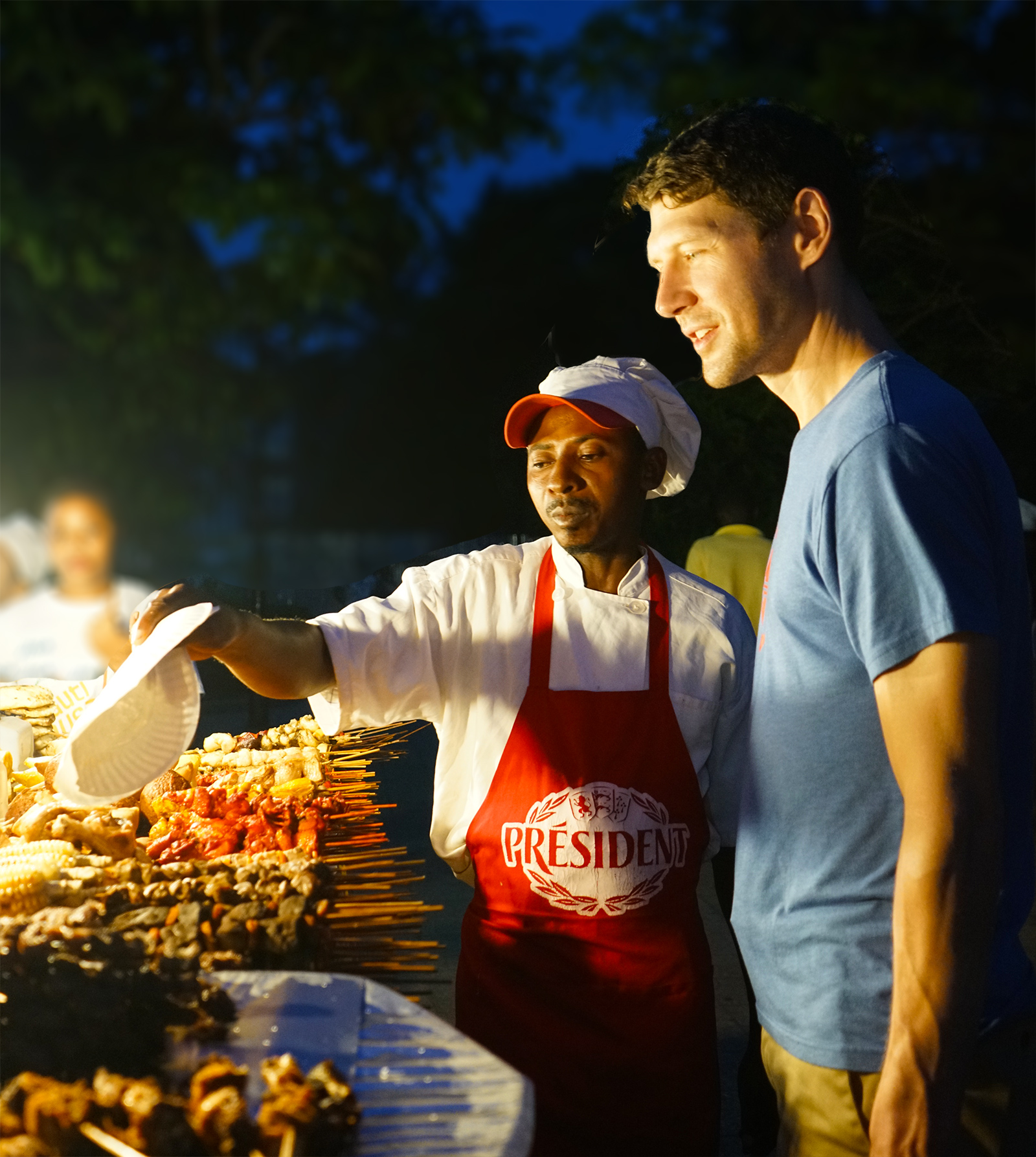 Did you know that Zanzibar was the epicenter of the Indian Ocean slave trade? We both feel like that wasn’t really a part of our world history studies, which focused on European colonization and the Atlantic slave trade.

Hundreds of thousands of slaves were captured and brought to Zanzibar, where they were auctioned off and then sent throughout the Middle East, or sometimes to the New World.

Today, there is an Episcopal Church on the grounds where the old slave quarters used to be, along with a museum. The museum is incredible - we read every word of the exhibits in spite of how horrifying the information was. We’re so glad we visited.

You can also walk inside a room where slaves were held, waiting to be shipped off from the marina (the ceilings were too low for Brian to stand up, and it’s terrifyingly hot in there). 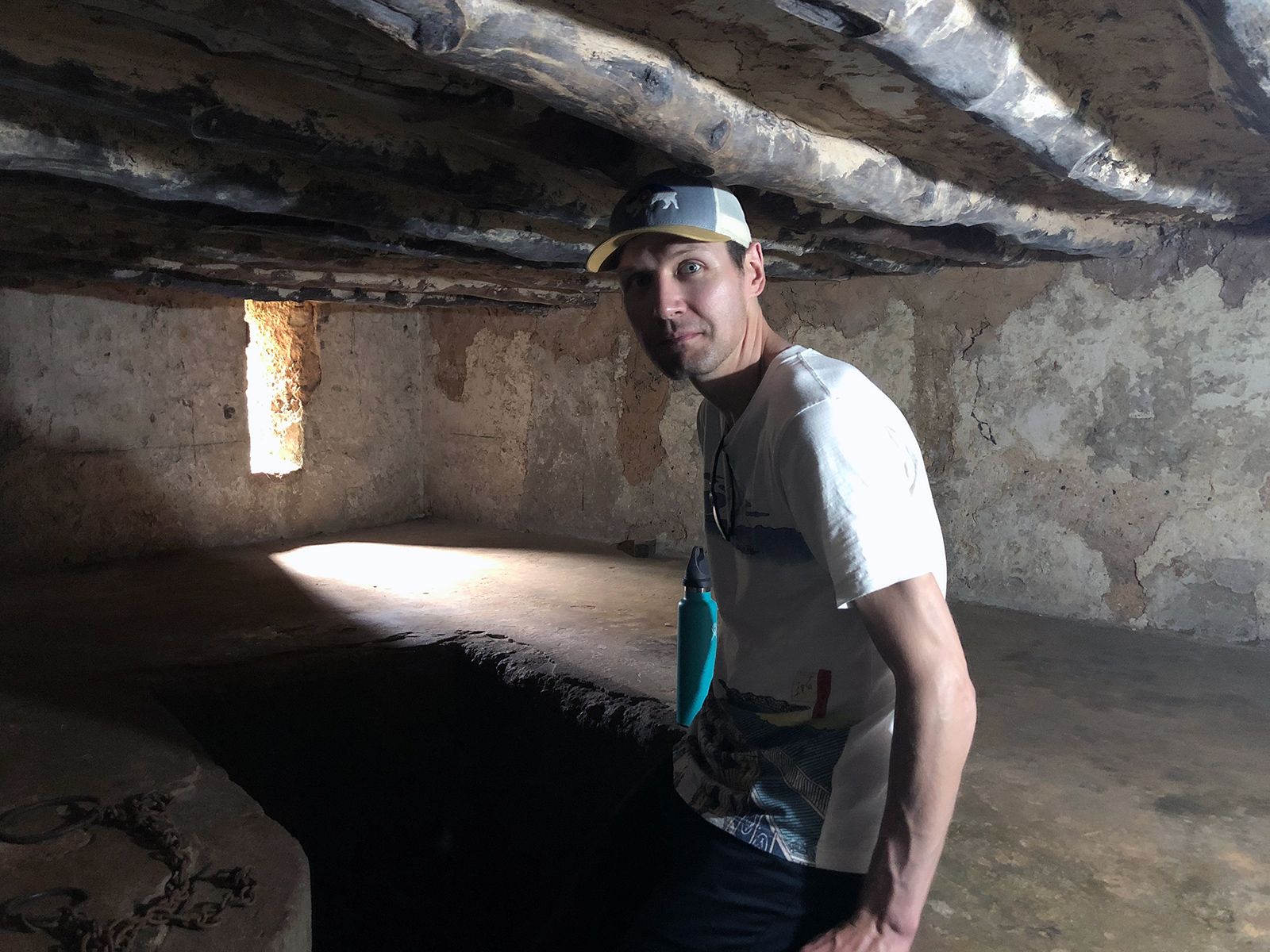 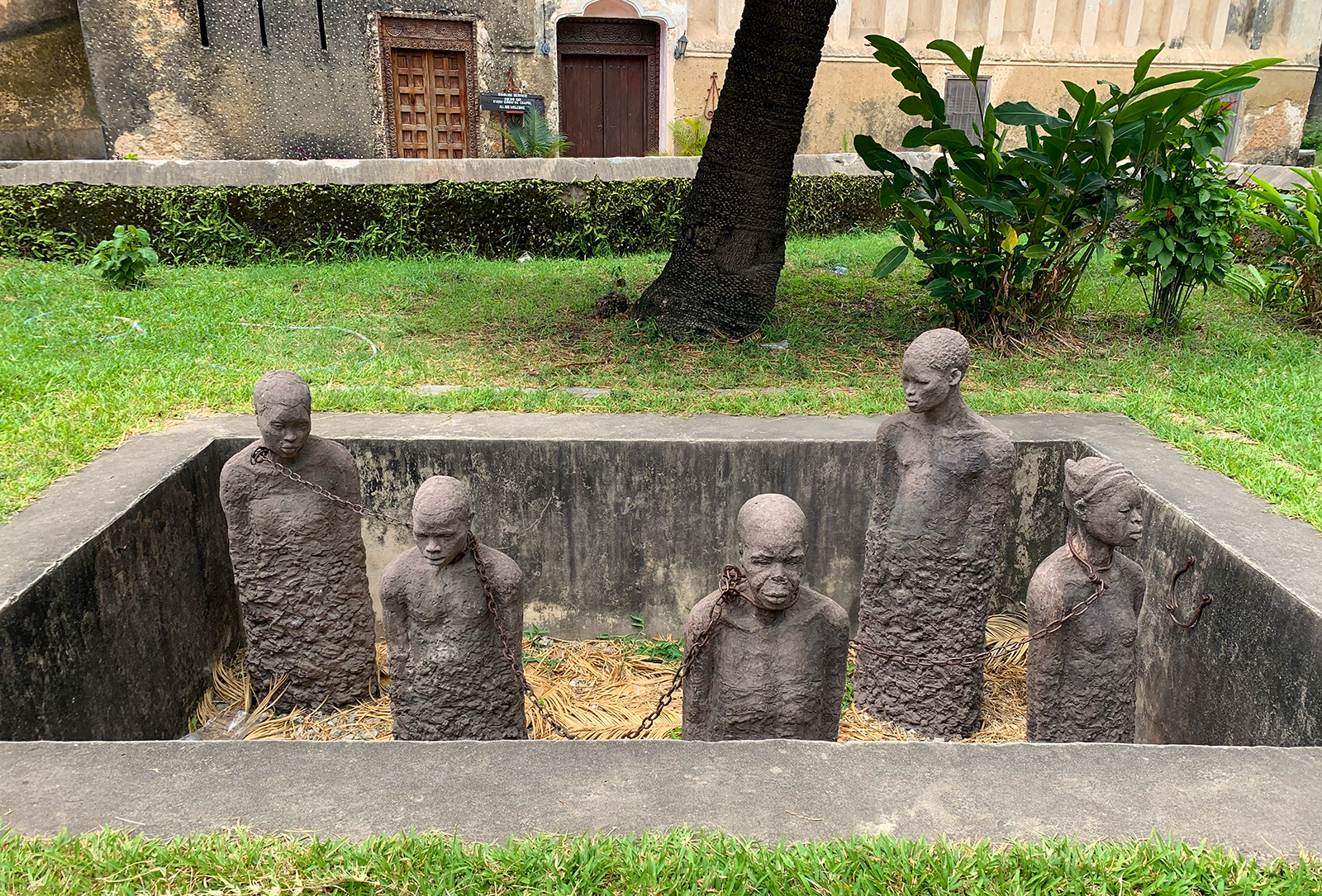 We used points to stay at a luxury hotel in Stone Town, the Park Hyatt. This hotel was awesome. It was an old palace converted to a luxury hotel. The location is excellent, on the edge of Stone Town, but a welcome retreat away from the hustle and the noise, with a quiet vista overlooking the ocean. Also it was air conditioned. We didn’t feel bad staying around the hotel all day. 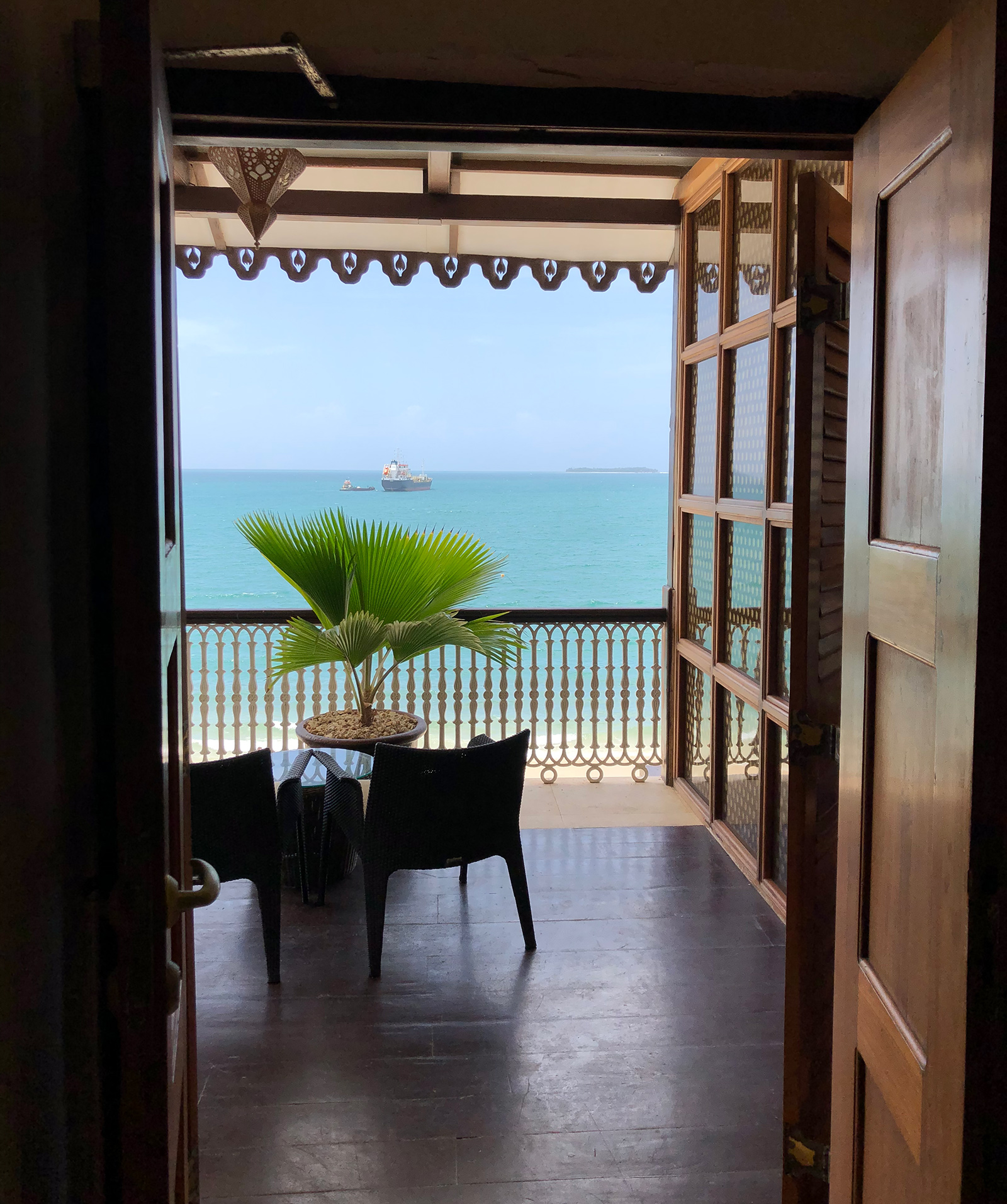 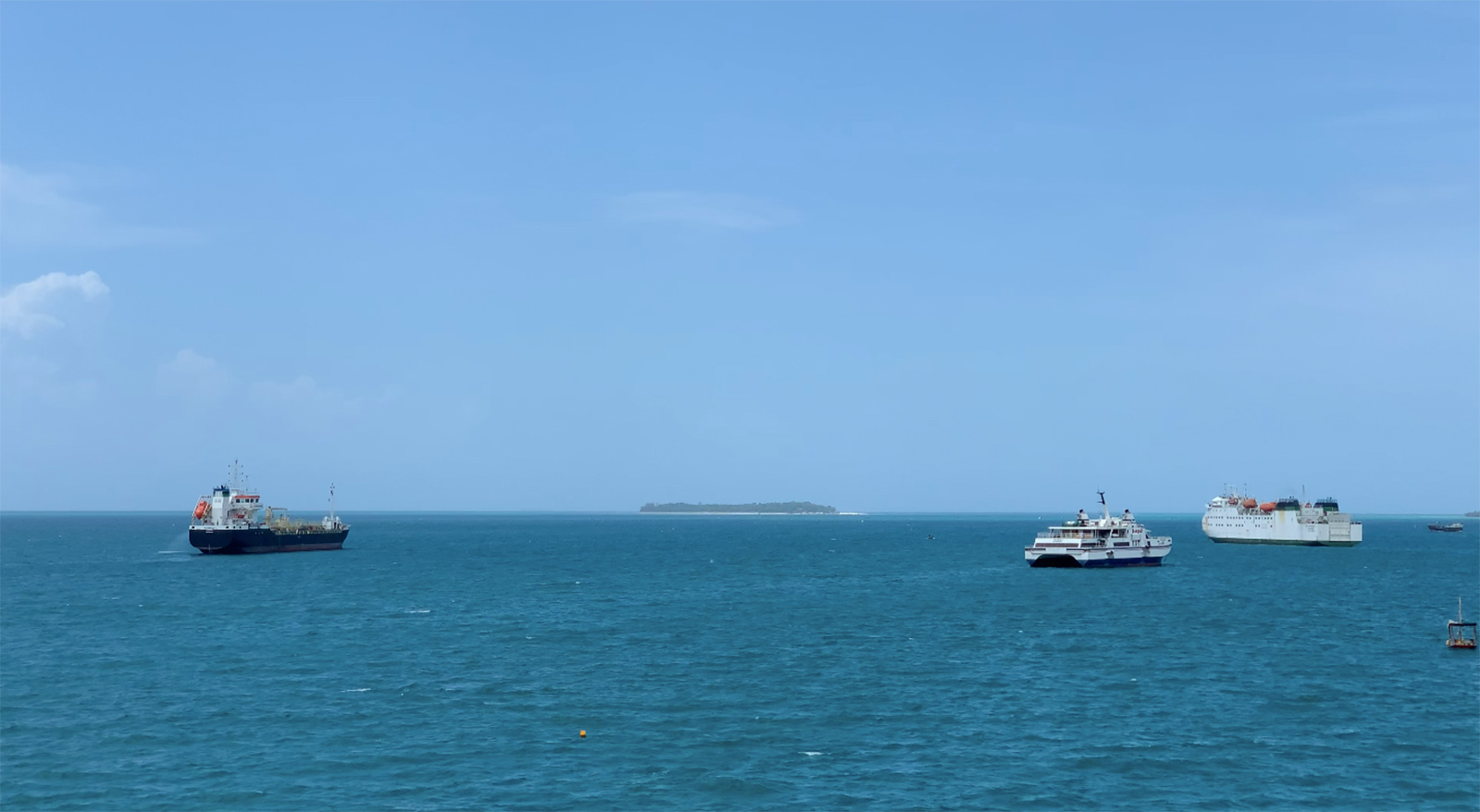 Their breakfast buffet was probably the best food that we ate in Zanzibar, including some delicious maracuya and other fresh fruit. 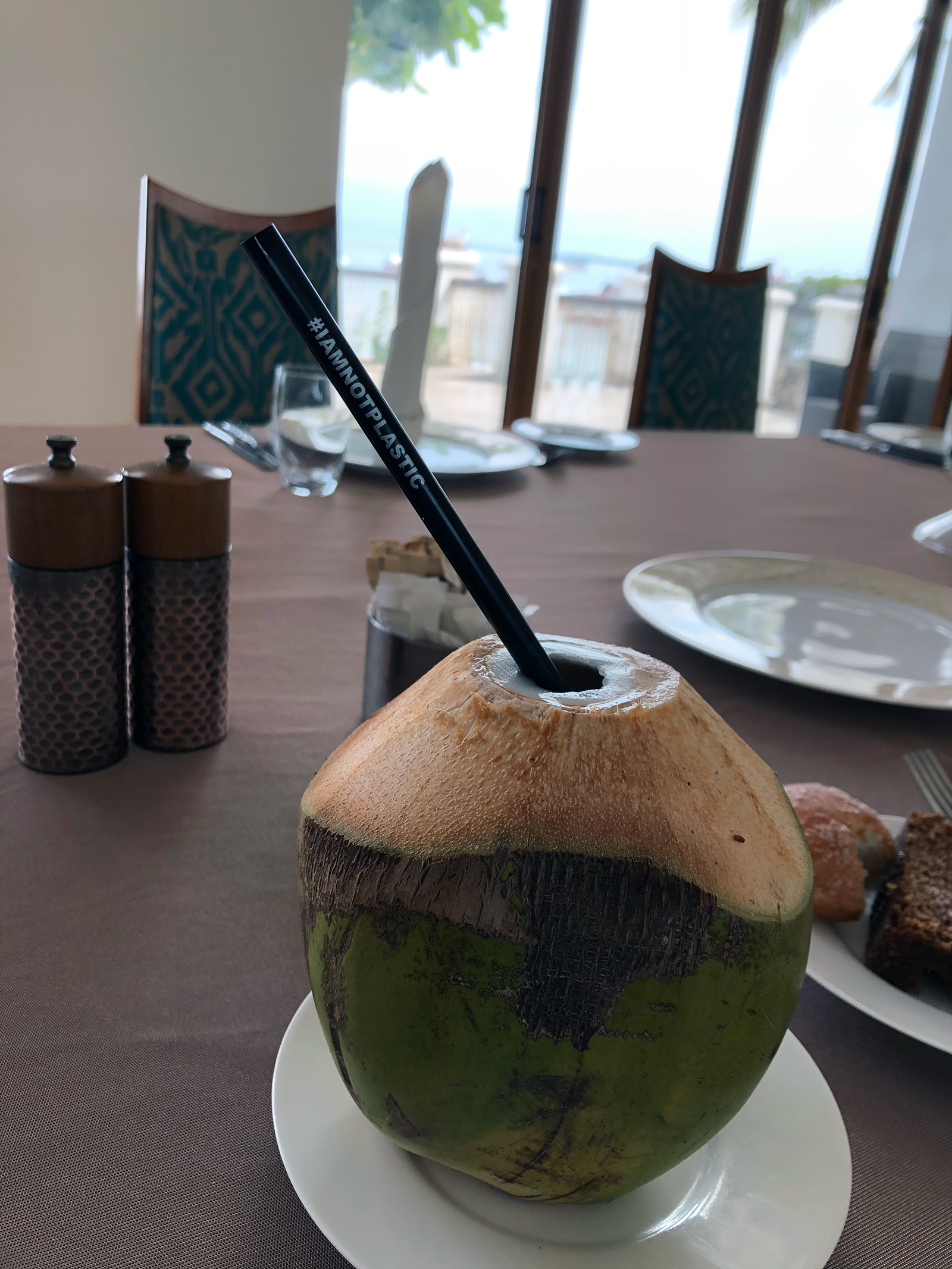 The only problem with staying at a luxury resort? Interacting with the kind of people who stay at luxury resorts. 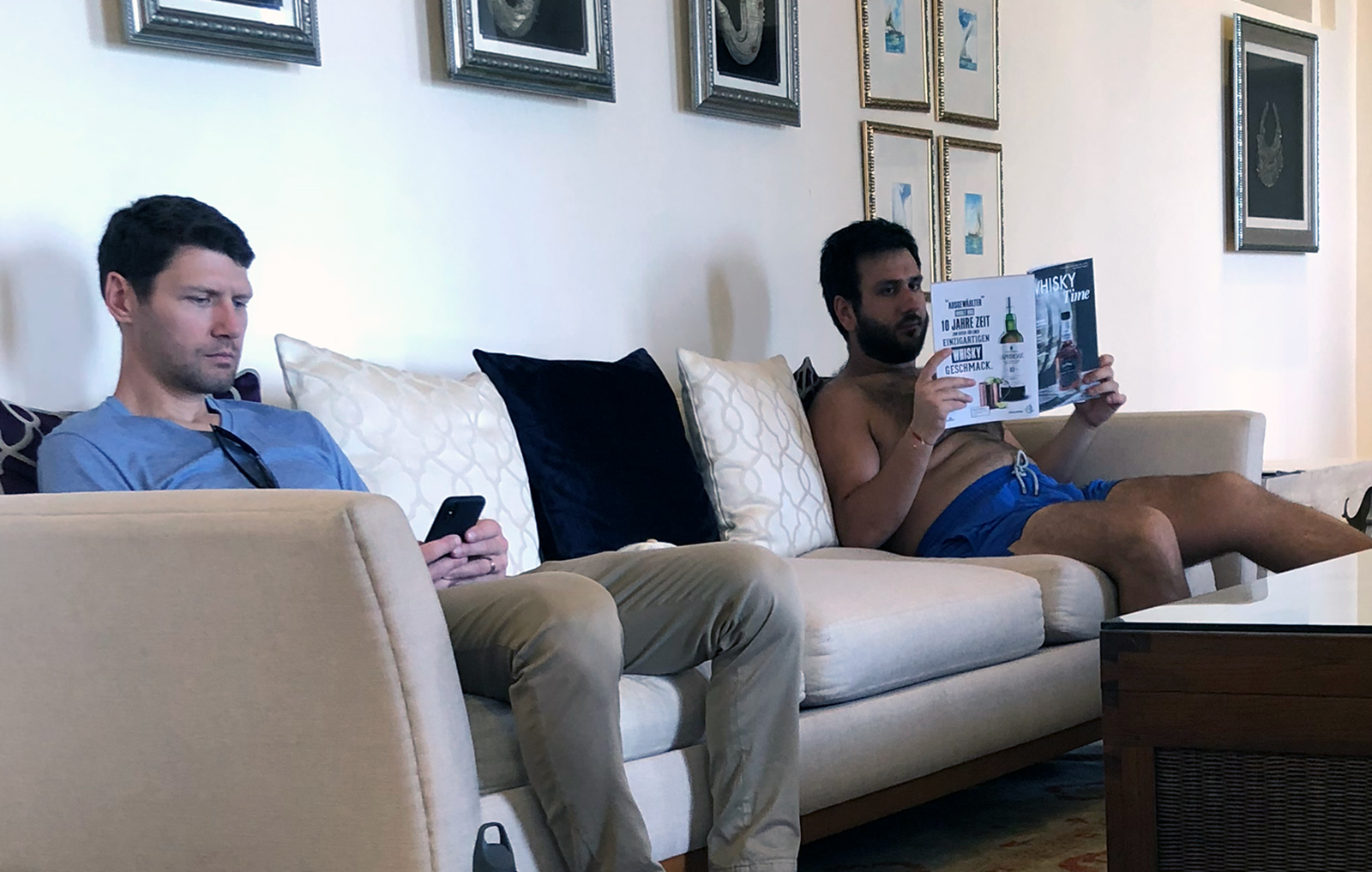 Jaws Corner is a famous intersection of Stone Town where locals gather to play board games and drink spiced coffee. Given Brian’s love of coffee, we had to visit.

This is probably the most chill coffee shop Brian has ever visited. The proprietor just hangs out in the corner of this pedestrian intersection serving patron after patron. There had to be at least two dozen people sitting around drinking coffee.

The coffee costs about 12 cents for a cup. Brian brought his own cup, as we read online the dishwashing situation is just a quick dunk in a bucket of water. However, the coffee is served so hot that it might boil off any germs, as it’s easily the hottest cup of coffee Brian has ever had. The coffee was tasty, spiced with a mix of cinnamon, cardamom, star anise, and more.

We sat for a few minutes waiting for the coffee to cool, and sweating like crazy in the humidity. The daytime temperature throughout our time in Zanzibar was about 98 degrees, with a real feel of 108, so it was quite uncomfortable from about 10am to 6pm. Sitting at Jaws Corner, we wondered how locals stayed cool in this weather, particularly while guzzling boiling hot coffee. 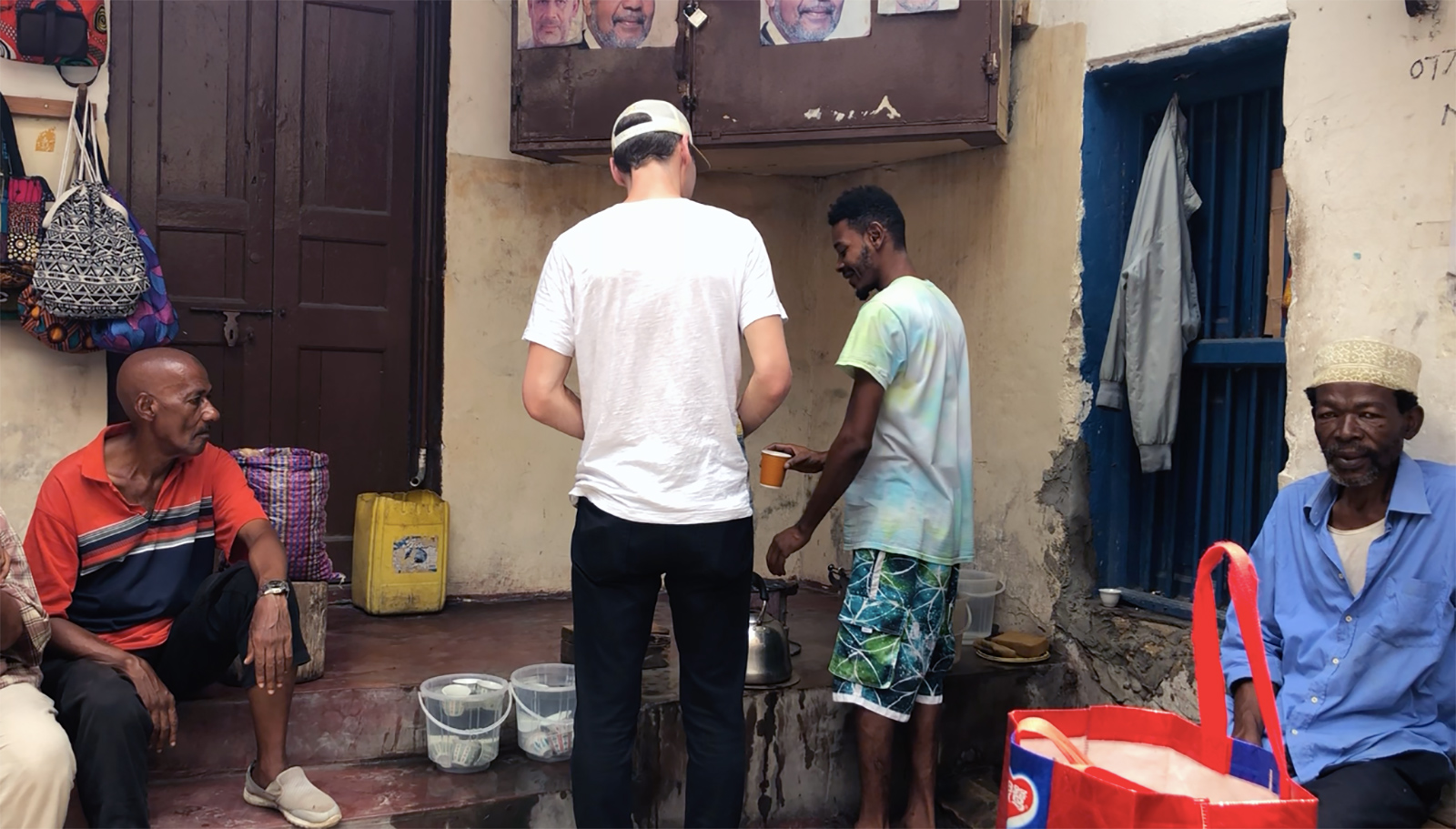 It’s essentially carnival food. Two pieces of dough, on which you place a choice of toppings (savory or sweet) and then fry on a griddle until crispy.

There are many vendors selling Zanzibar Pizza in Stone Town, at the street food market. They all have punny names, like Mr. Nutella or Mr. Big Banana. We went with Mr. Big Hat.

We tried one savory and one sweet (on different nights; we’re not completely insane). 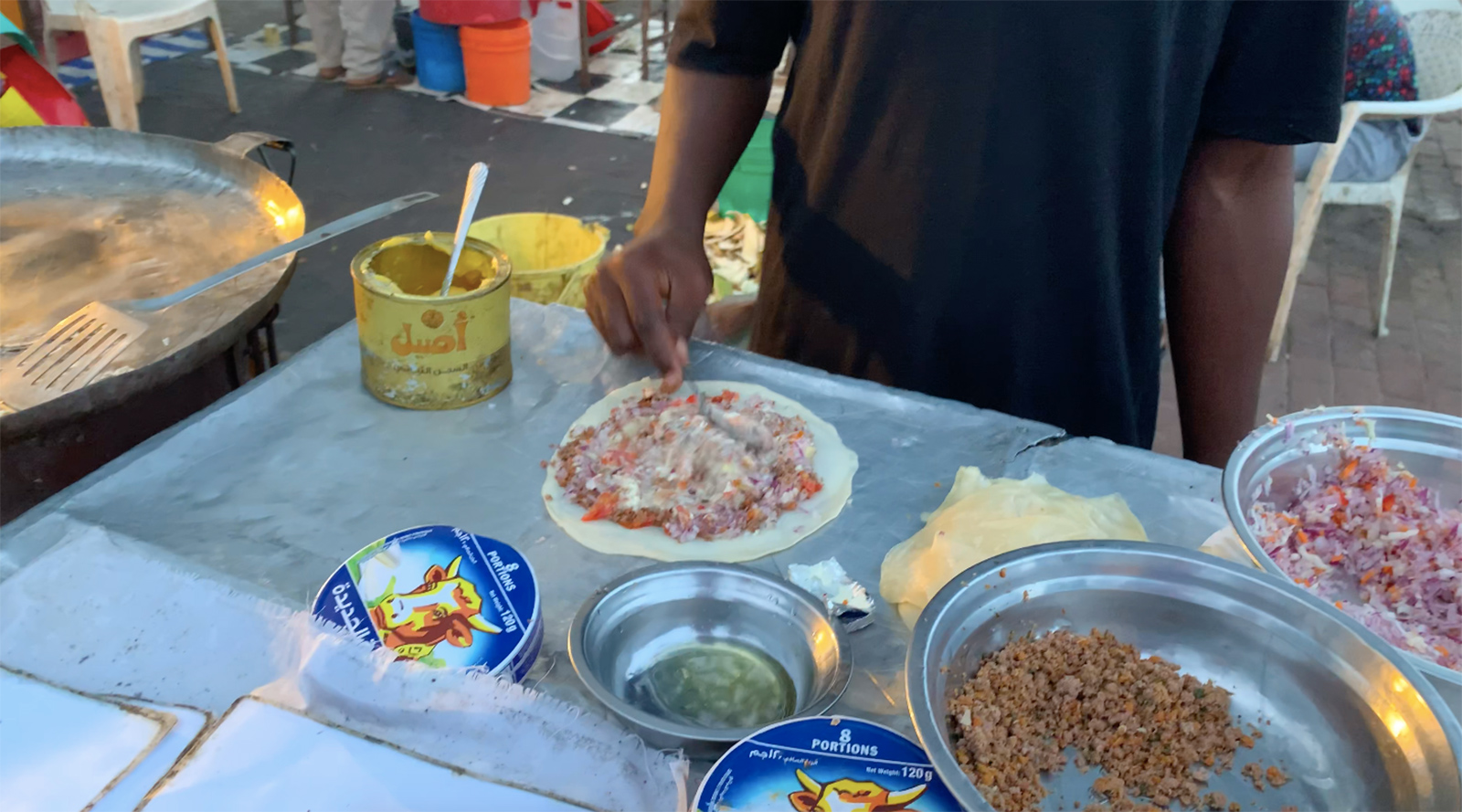 Second: Dessert pizza. Banana, peanut butter, and half a Snickers bar. The banana was actually ginormous, about the diameter of an orange (hence the other stand’s name, Mr. Big Banana). 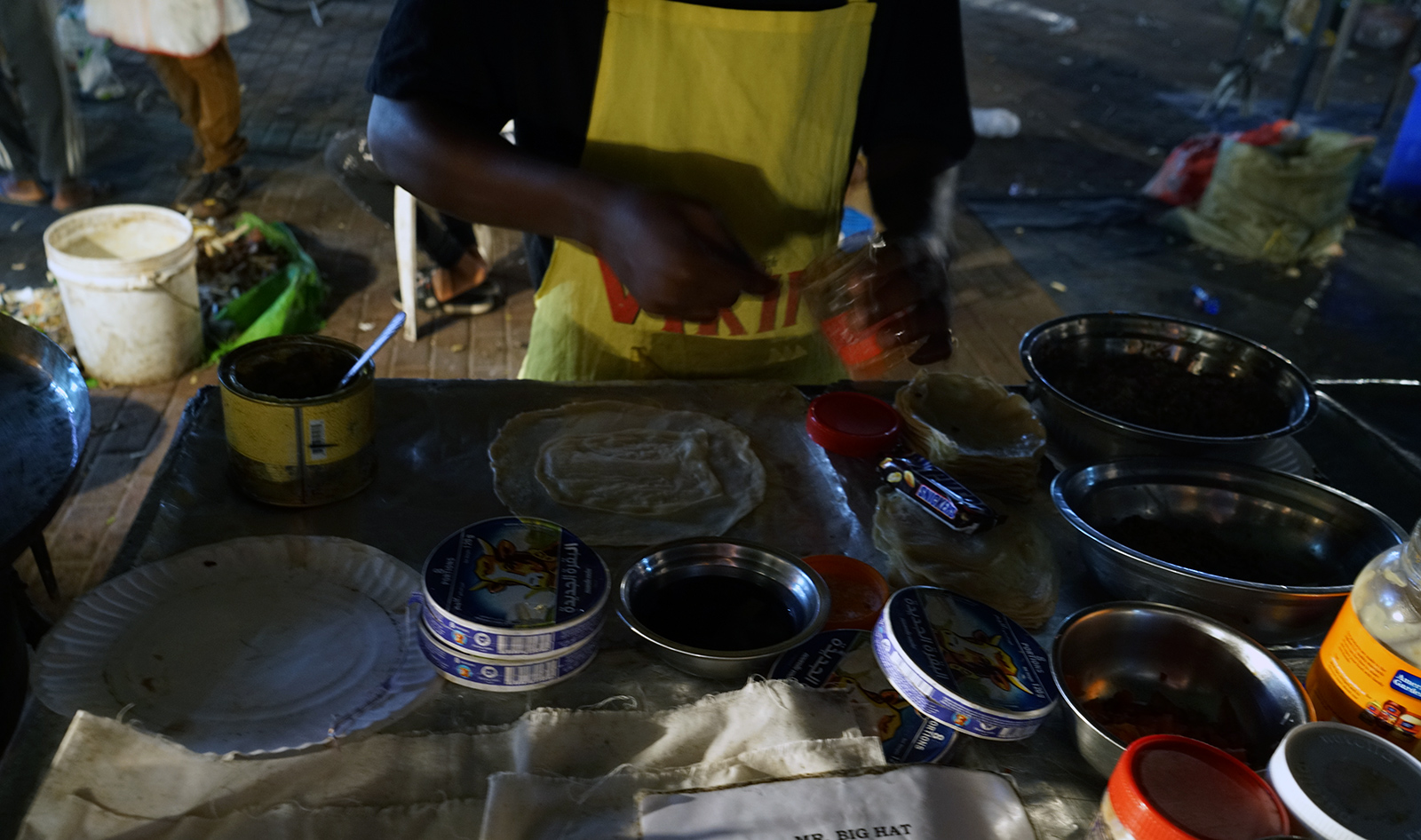 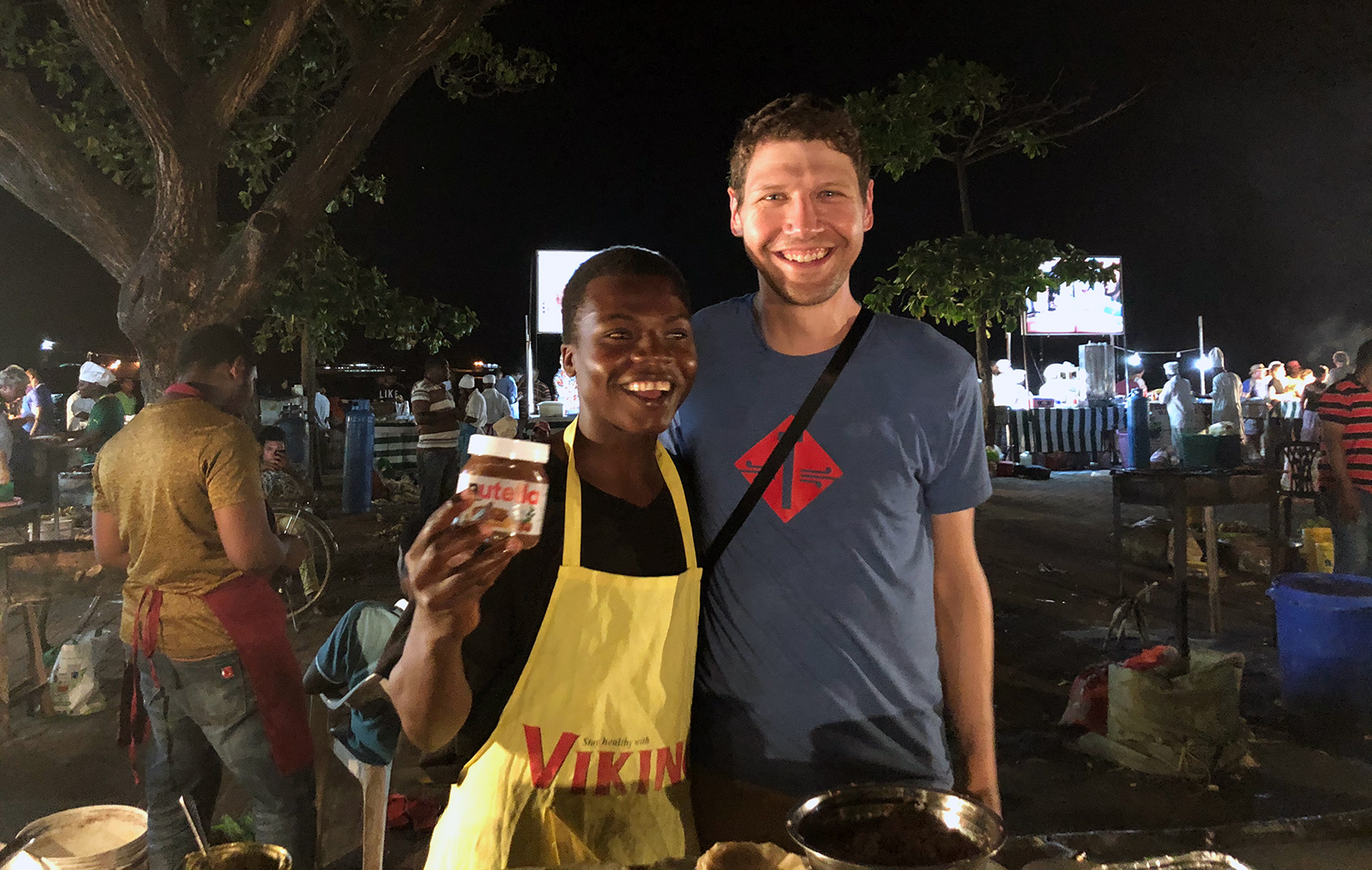 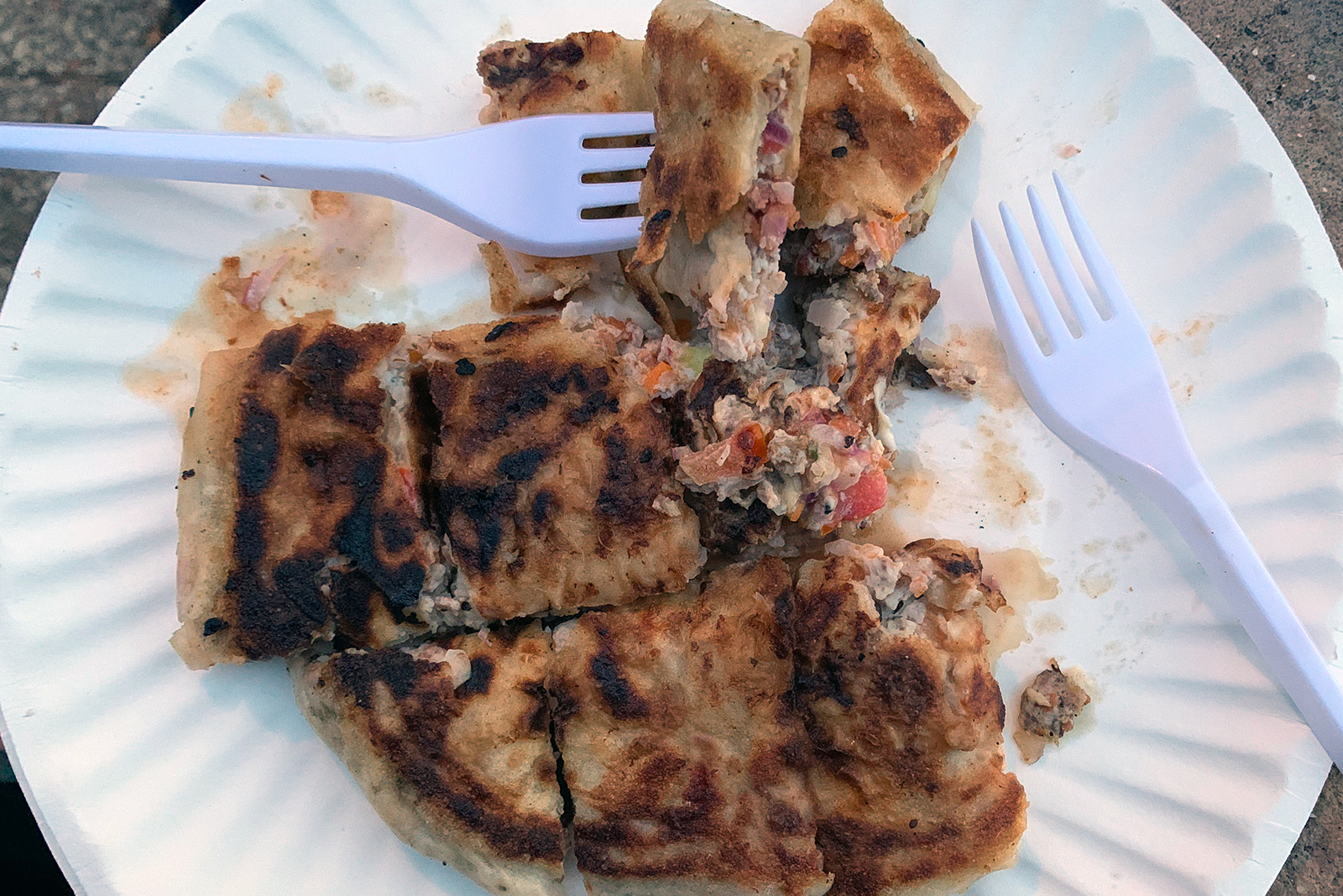 They were unbelievable, in every way you can imagine.

Admiring the Waters at Nungwi Beach

After a few days in Stone Town, we took a long taxi ride to the north of Zanzibar to Nungwi, where we chilled/sweated out the rest of our time in Zanzibar. People (apparently mostly Italians and Russians) go to Nungwi to hang out on the beach and that’s about it. We came to think of it as Europe’s Carribean or Baja coast. The water was stunning and especially enjoyable in the morning when the sun was not yet scorching. 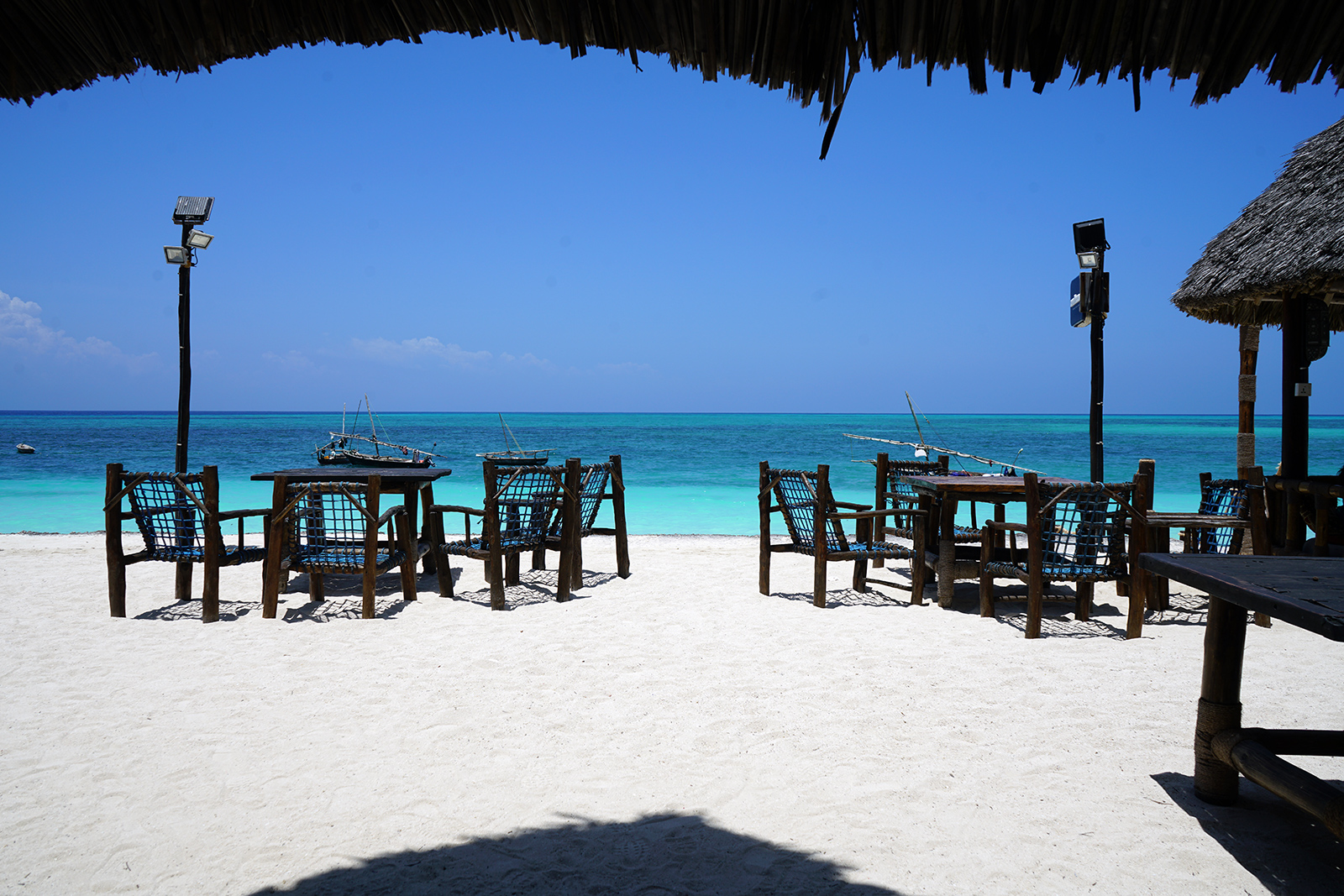 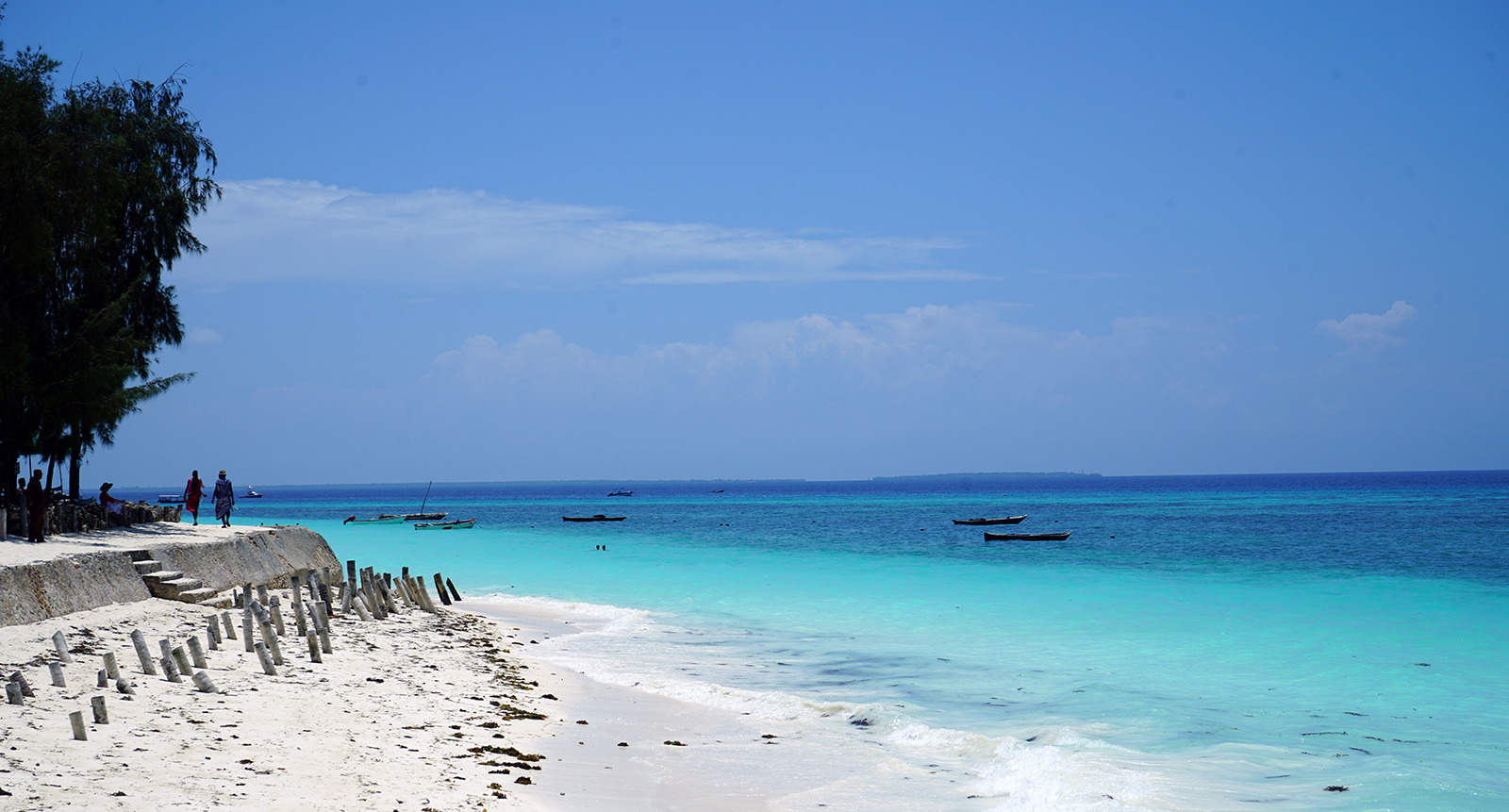 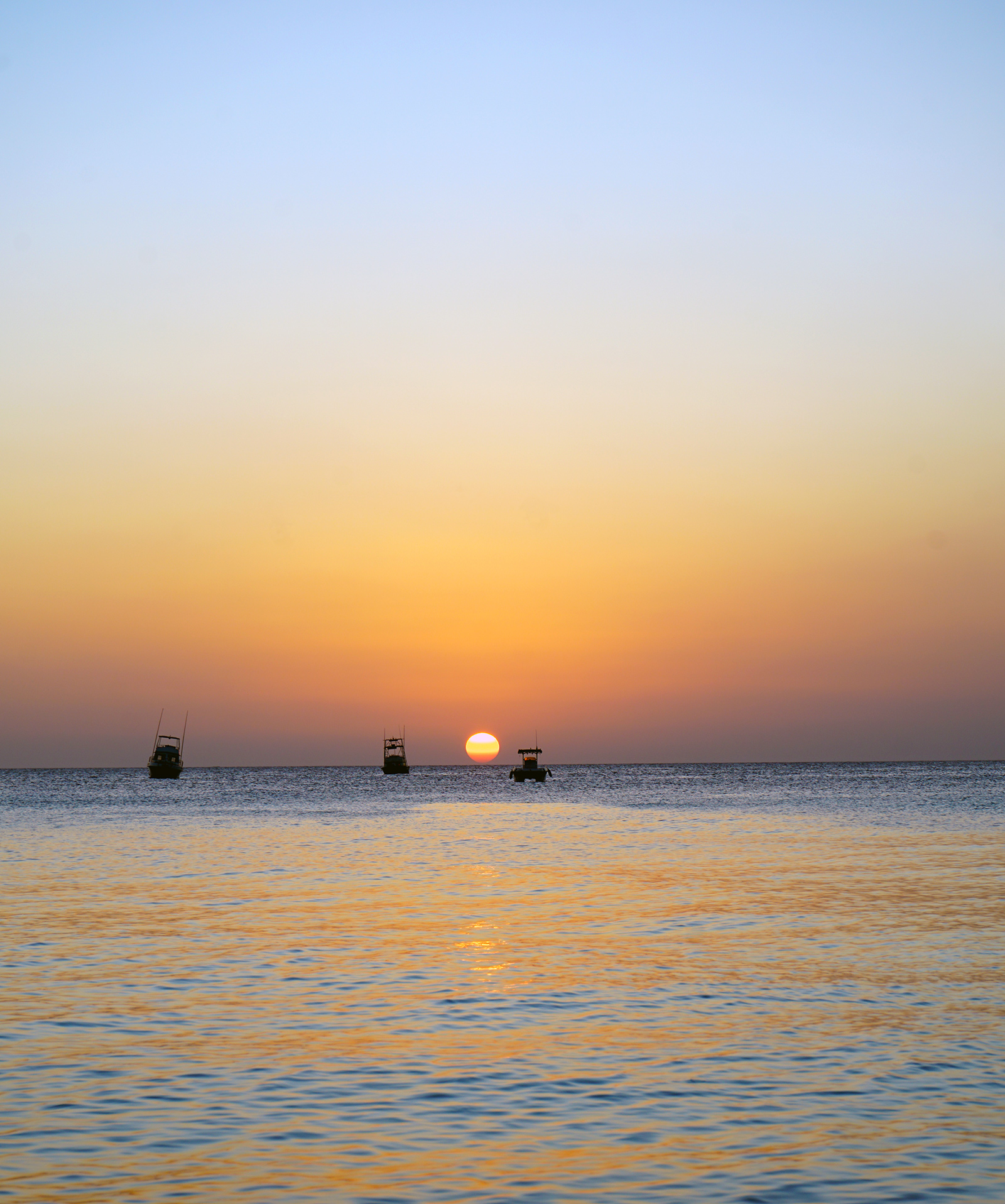 We took a 2-hour boat ride from Nungwi Beach to Mnemba Island, on the east coast of Zanzibar. Bill Gates supposedly owns the island. It’s a popular destination for snorkeling, and that’s about all. You’re not allowed to go on the beach because it is a private island, so a couple dozen boats anchor out about 100 yards from the shore and passengers snorkel for an hour or two. 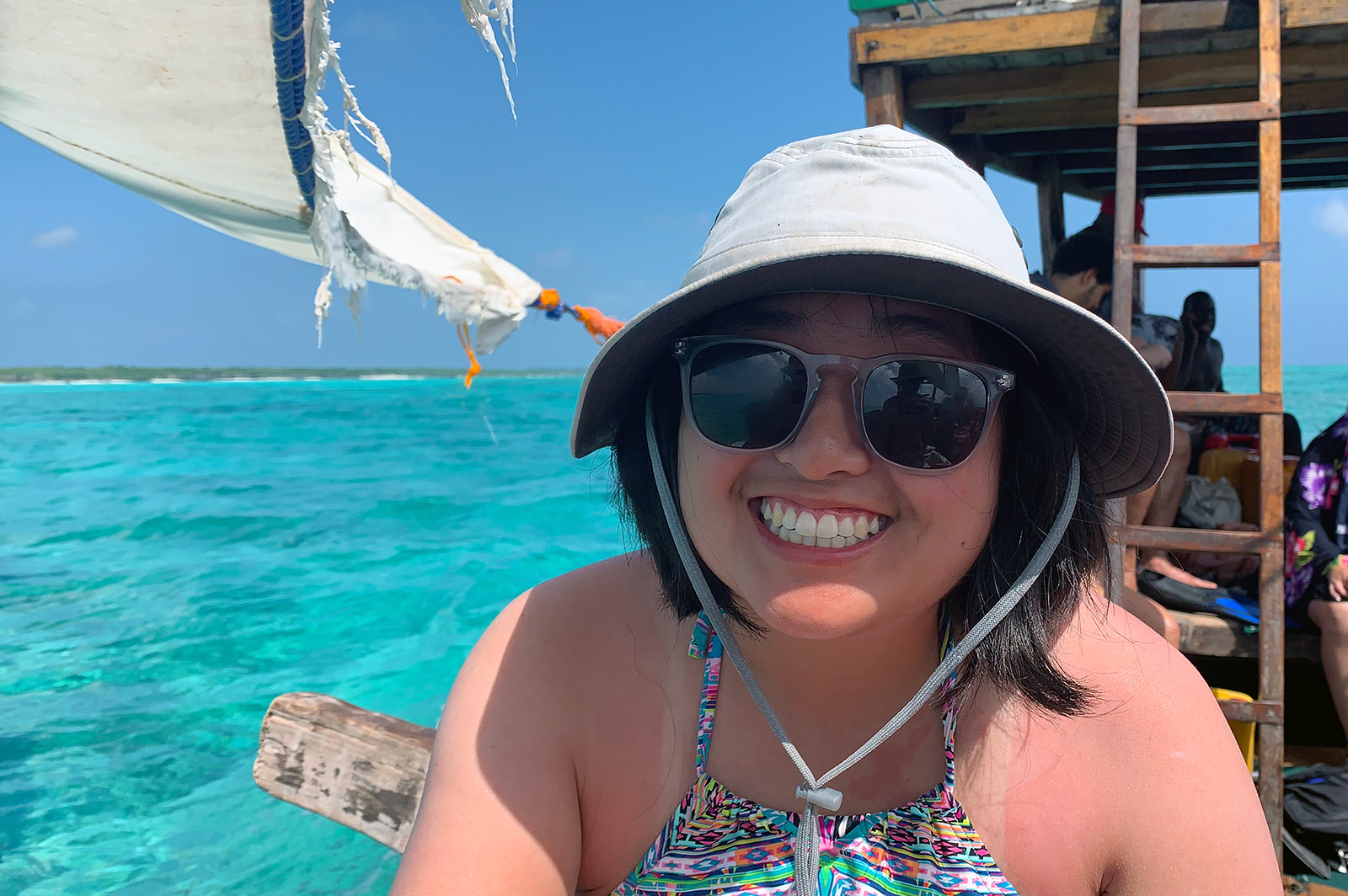 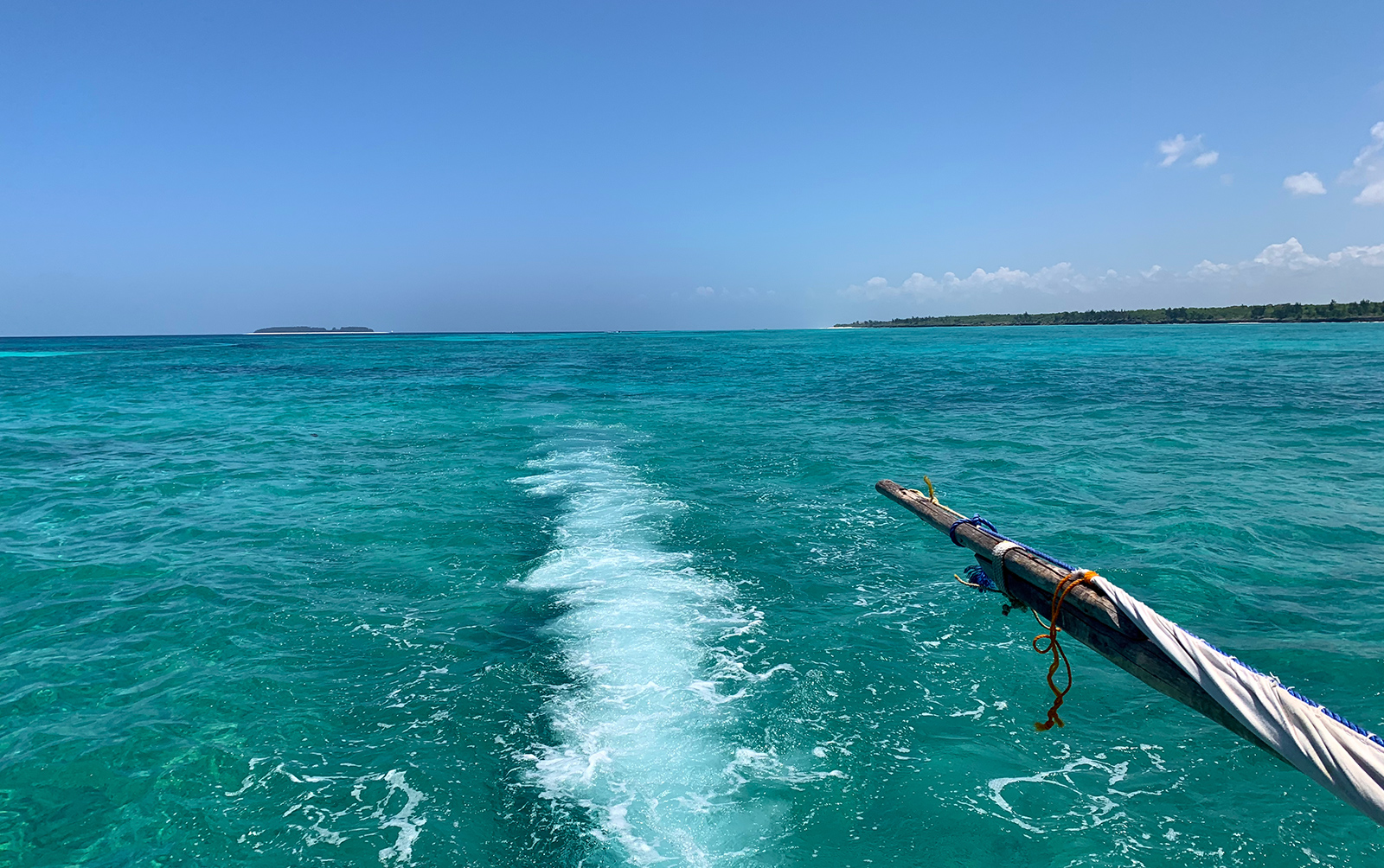 Snorkeling was fun. But the best part was jumping off the roof of the boat.

This was how we spent Brian’s birthday - watching the sunset on a beach in Zanzibar, drinking a moderately cold Kilimanjaro. Hey, it was like $3 for a big bottle. 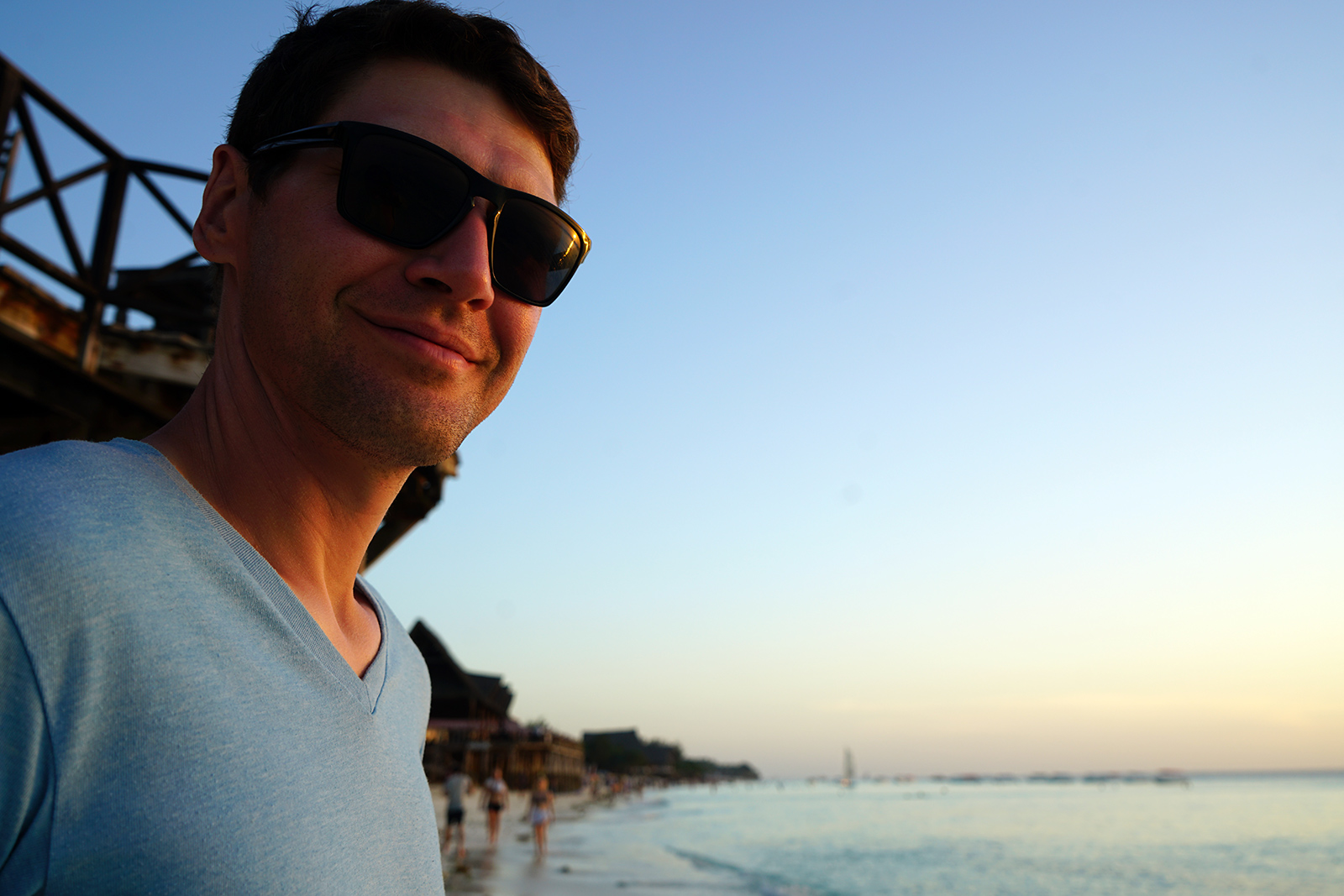 Brian enjoyed it so much, he got a t-shirt. 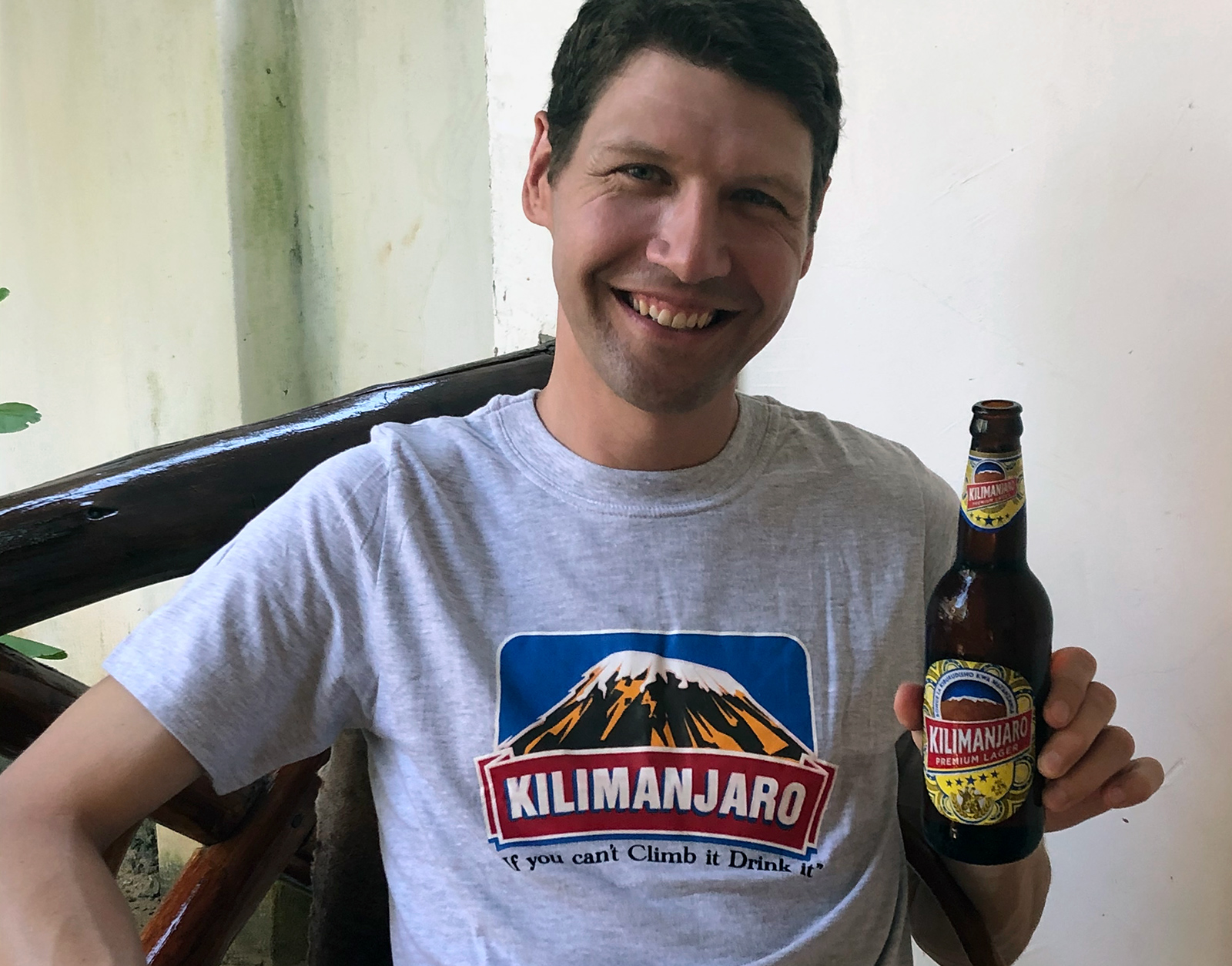 Note: The t-shirt subsequently shrunk when we paid for laundry service in Delhi, so now it is Tiffany’s shirt.